Donald Driver looks on during a 2011 Packers game against the Giants.
Jim McIsaac/Getty
By Evan Bleier @itishowitis

A hard-hitting safety on the football team at Liberty Christian School in Argyle, Texas, with offers to play college ball at top programs like Alabama, LSU and Notre Dame despite only being a junior, Cristian Driver is already following in the footsteps of his father. But the former Green Bay Packers wide receiver Donald Driver and his son have something else footstep-related in common: shoes.

The Super Bowl-winning wideout and his 17-year-old son recently partnered up to design a new line of shoes with Milwaukee-based leather outfitter Moral Code. The brand’s first ever collaboration includes five styles, and a portion of all proceeds will go towards supporting career and community development initiatives for underprivileged children and families via the Donald Driver Foundation.

For the elder Driver, the collaboration and the charitable donations it will lead to are a continuation of a realization he had before his first preseason game in the NFL in 1998, courtesy of his former teammate Antonio Freeman.

“When I came up to Green Bay in April in shorts and a tank top and snow was on the ground. That’s all I had,” he tells InsideHook. “The Packers gave us a Green Bay jumpsuit to wear for cold weather. They told us that we had to dress up going to our first preseason game, so that’s what I wore. I got on the plane wearing that and after we got off Antonio Freeman came up to me and said, ‘Hey, man, I want to make sure I take care of your next trip. I’m going to buy you your first suit.’ When he told me that, it made me realize my mission in this world was to continue to give back to others and make an impact in a world that’s hurting every single day.”

Along with the realization about his life’s purpose, the gift of the suit — a blue, two-tone pinstriped number — also drove home an important lesson about getting ahead in life.

“If you look good, you feel good. You have to be confident in your own self. I knew at that point I needed to dress for success if I wanted to have a long career after the game of football. Football only lasts a certain time and then you have to go into the real world,” he says. “I had a degree in accounting and didn’t know how long football was going to last. I knew if I had to go into banking or finance and become my own CPA, I needed to be dressed for success. We’ve all been stereotyped one way or the other. If you have your pants sagging and your shoes are dirty and you look a certain way, people won’t take you seriously and won’t respect you. You have to present yourself a certain way if you’re going into the corporate world or you are going into a certain industry. That’s what we really want to teach our young men. You have to be willing to look at yourself from a different perspective. For me, it was like I want to be the same person inside, but I needed to be a little bit different outside.”

As Cristian explains, dressing for success starts from the ground up, hence the Moral Code collab.

“We chose shoes because that’s what most people look at when they meet you or if they’re looking at you from afar,” he says. “They don’t look at your clothes first. They look at your shoes and then look up as time goes on. I think shoes catch people’s attention the most. They look at the bottom and then they come up to the top. That’s why we created the shoes.”

In addition to delivering a powerful message as well as generate funds for a good cause, the shoe collaboration was a way for the Drivers to work together, just like they did when they built robots together when Cristian was growing up.

“This was an amazing opportunity to collaborate with someone I truly love,” Donald says. “To have my son as my right-hand man and be with me every step of the way … a lot of people just don’t get that. If I can show him the pathway to success through shoes, then I feel like I’ve done my part. We have an opportunity to impact and change the world as a father and son. I was able to create something with him, not for myself, but for him in the future.”

And, as Donald often reminds Cristian, that future is not guaranteed to include football.

“I’ve always told Christian that the game of football is only going to last so long and he has to prepare for what the street may hold down the road,” Donald says. “We have to get our young men to understand that there is life after football. Some people won’t make it to the highest level. Some people won’t make it past college. Some people won’t make it past high school. We need to teach our young men life after football happens the moment they start to play the game. They have to start preparing for what comes next. The day you put those pads on and realize you are going to play the game you love, understand there’s life after that. Prepare yourself for what the future holds and make sure you dress for success. Start with your shoes.” 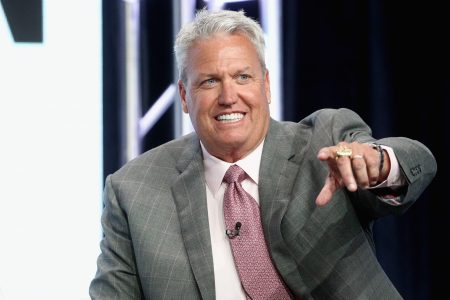 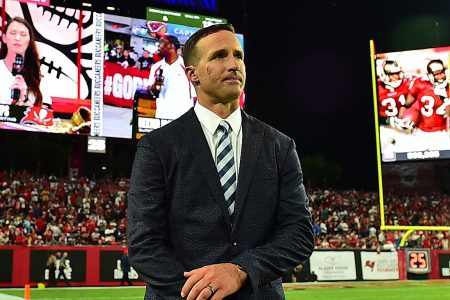 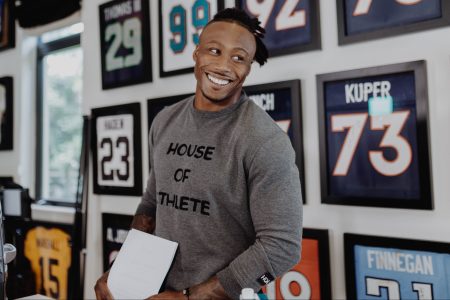 Now Retired, Brandon Marshall Remains One of the NFL’s Most Honest and Important Voices