The Singular Experience of the Bundesliga, Europe's Purest Soccer League

Passionate supporters, colorful displays and great beer make for a live experience like no other 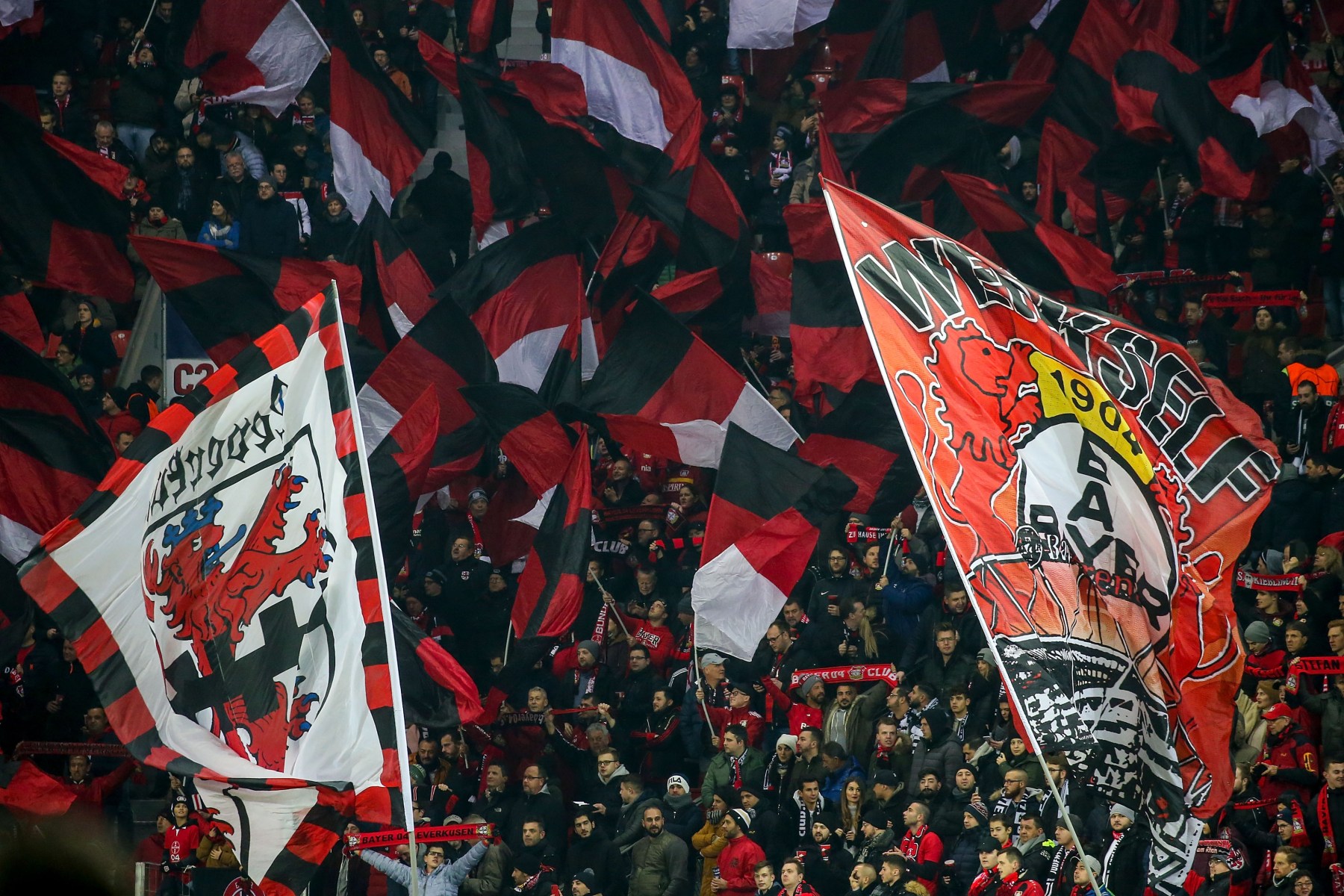 Supporters of Bayer 04 Leverkusen with flags during the UEFA Champions League group D match between Bayer Leverkusen and Juventus at BayArena on December 11, 2019 in Leverkusen, Germany.
TF-Images/Getty Images
By Tobias Carroll / February 12, 2020 8:19 am

The enthusiasm that soccer summons in its most devoted fans can take many forms. I’ve seen Portland Timbers supporters rejoice after a chainsaw-wielding man sliced into a log to celebrate a goal, and have also witnessed supporters of the visiting Celtic FC crowd into the home stadium of Livingston F.C in Scotland., outnumbering home fans by about three to one. I’ve talked with a Texas-based supporter of Liga MX team Santos Laguna who’d flown across the country to watch his beloved team take on the New York Red Bulls in a mid-week CONCACAF Champions League game. And I’ve read accounts of extreme behavior like Bill Buford’s Among the Thugs and Martin King and Martin Knight’s Hoolifan: 30 Years of Hurt. I know a lot about the good, the bad and the downright weird you can expect out of football fanatics.

But until I visited Germany, I don’t think I’d gathered just how intense of an atmosphere soccer supporters can truly conjure.

Some context: the Bundesliga, Germany’s first-division soccer league, is considered to be one of the world’s best, alongside England’s Premier League, Italy’s Serie A and Spain’s La Liga. Of those four, it’s also the one with arguably the highest level of parity from year to year: while Bayern Munich remains the league’s juggernaut, roughly half of the teams are in contention to qualify for European competition in any given season. This includes Borussia Dortmund, RB Leipzig, F.C. Schalke 04 and the team I’d traveled to see, Bayer 04 Leverkusen — but it’s far from limited to them.

The 2019-2020 Bundesliga season also involved both Bayern Munich and Borussia Dortmund getting off to slow starts, which upped the parity factor even more. At the time that I traveled to Germany, RB Leipzig — who have a bit of an Evil Empire reputation thanks to their corporate ownership structure in a country that has long resisted that model — were atop the standings. (Curiously, when flying home from Frankfurt, I noticed merchandise from only two German teams represented in the international duty free shop: Bayern Munich and F.C. St. Pauli, who play in the second division but have amassed a cult international following. There were no scarves for, say, Bundesliga mainstay Eintracht Frankfurt to be had there.)

In the last few years, the Bundesliga has also become a destination for up-and-coming American players. You’ve got Tyler Adams at Leipzig, Weston McKennie at Schalke (whose manager, David Wagner, also played for the US Men’s National Team) and Giovanni Reyna at Borussia Dortmund — previously home to US Soccer’s would-be messiah, Christian Pulisic. As a whole, the Bundesliga is known for being an international destination: former players for Bayer 04 Leverkusen include current Tottenham Hotspur star Heung-min Son and Mexican national team mainstay Javier “Chicharito” Hernández.

The current Bayer 04 Leverkusen squad includes numerous players who’ve come up through the team’s own player development system, like midfielders Kai Havertz and Adrian Stanilewicz. They’re joined on the roster by an group of players from around the world, including Finnish goalkeeper Lukáš Hrádecký, Jamaican winger Leon Bailey and France’s eminently creative Moussa Diaby, a creative attacking player in the mold of Son.

One not-insignificant reason for the intense atmosphere at Bundesliga games: you can drink beer in the stands. This is not the case in England, and the combination of tradition and beer leads to a crowd that’s willing to sing loudly, shake their scarves and make plenty of noise for 90 minutes straight. The added combustable element might make a newcomer a little nervous, like you’re smack in the middle of a powder keg and the tiniest spark could set things off. It’s thrilling, to say the least.

The matchday experience isn’t confined to the stadiums, either. Public transportation to and from games abounds — which means you get moments like traveling via light rail through the streets of Cologne, packed into a car alongside a host of 1.FC Köln supporters who’ve started their drinking for the day on the early side, and who are already engaged in singing cheers for their beloved team, and loudly. (My German isn’t particularly good, but it seemed as though their songs were as much about their hatred of their rivals — the word scheiße seemed to feature prominently — as they were about their love of 1.FC Köln.)

My itinerary spanned two games in four days: Leverkusen’s UEFA Champions League match against Juventus, and then a derby game against their local rivals from Köln. The first of those, on a cold mid-week night in the middle of winter, saw just shy of 30,000 people crowded into BayArena, opened with a lone musician with an acoustic guitar singing a song to the supporters’ section — which thousands of voices sang back at him, and to the rest of the stadium.

Sound wasn’t the only thing that was striking about the supporters’ display. The sight of hundreds of supporters waving flags of various sizes made for a sight that was almost as memorable as the game that followed. Before the game began, they also set up a tifo in which long banners spelled out each digit of “1904,” the year the club was founded.

These ornate and energetic displays weren’t specific to the home supporters for Bayer 04 Leverkusen — a few days later, when they faced off against 1.FC Köln, the home supporters at Cologne’s RheinEnergieStadion featured a similar display. A few of the traveling supporters from Leverkusen, meanwhile, opted to set off flares, prompting a few stern announcements over the public address system.

Watching the away Leverkusen supporters congregated in their designated sections made for a visual every bit as striking as the home fans’ spectacle. Nearly all of them were clad in black, making it obvious from a single glance where they were standing within the larger stadium.

In a conversation with some of the club’s supporters between the two games, they revealed some fascinating quotidian details. One supporter, when visiting the club during their training session in Orlando, ended up donning the costume of Brian the Lion, the club’s mascot. Another made a distinction between supporters and the club’s ultras, the latter of whom are largely responsible for the heavy-duty flag-waving and choreography during games. Yet another spoke of “ground hoppers,” the supporters who were most eager to visit every stadium in the league — many of whom were thrilled to have the chance to visit Berlin’s Stadion An der Alten Försterei in the coming months (1. FC Union Berlin, who play there, were just promoted to the Bundesliga for the first time from the country’s second division).

There’s a general sense of closeness between supporters and the team itself; given that other leagues have encountered clashes between fans and the larger organization, it’s a welcome contrast. Some of that seems to be in keeping with the overall ethos of the Bundesliga, which has managed to keep ticket prices relatively low compared to their continental counterparts in Spain and England.

The area around Leverkusen abounds with first-division teams: besides the two mentioned here, Fortuna Düsseldorf and Borussia Mönchengladbach are less than an hour away. The blend of supporter passion and linkage with the team organization certainly helps with the league’s unique atmosphere. So too does the Bundesliga’s relative parity: this is a league where nearly anything can happen, and where you can see outstanding soccer in one of the most vibrant settings imaginable.