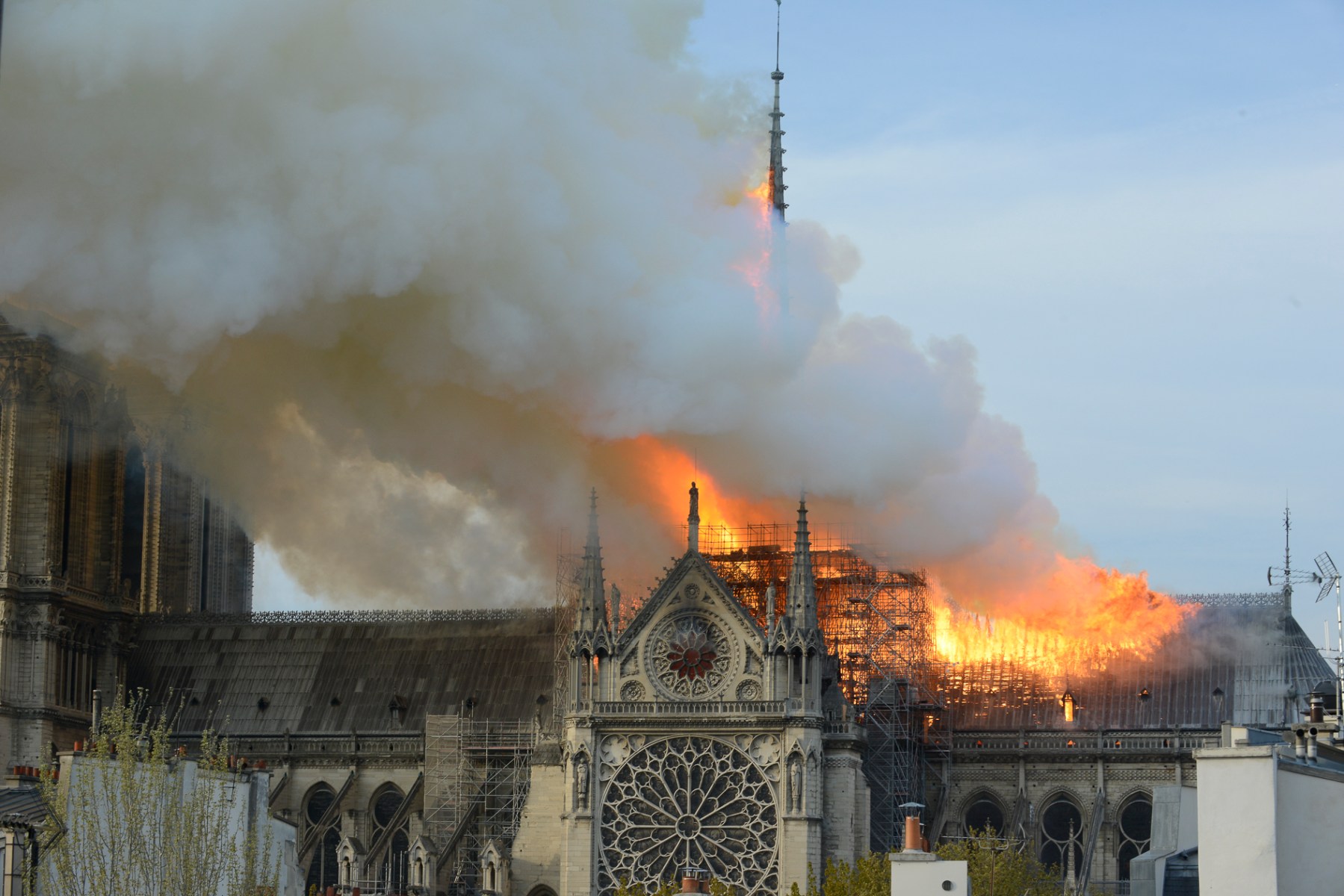 A fire raged through the iconic Notre-Dame Cathedral in April. (Philippe Wang/ Getty)
Getty Images
By Ariel Scotti / April 21, 2019 6:00 am

It’s easy to feel apathetic about the news these days. With the constant stream of political tweets, Facebook updates and people yelling on 24-7 news stations, there are times when feeling angry or sad isn’t an option. Sometimes the news of the world might just not hit people the way it once did. It’s a strange product of our times, but there is also an element of self-care in there: if you want to stay sane, you have to save your feelings for the times when it really matters.

The time, unfortunately, was right earlier this week, when the grand Cathédrale Notre-Dame de Paris was burning. It was one of those rare events when the jaded masses collectively stopped what they were doing to watch, grieve and process. With all the horrible things happening in the world at any given moment, the plight of a building captured our attention and emotions in a way other news stories don’t in 2019.

While the two main towers that house the UNESCO World Heritage site’s famed bells, along with its stunning, stained-glass rose windows, frame and spiny flying buttresses remain, what has been lost of the cathedral — the iconic spire, roof and evidence of one of history’s greatest feats of gothic architecture — is irreplaceable.

Monday’s fire first engulfed Notre-Dame’s wood-and-iron spire before it caught on to “the forest”: the unsalvageable wooden roof in the rear of the chapel carved largely from trees cut between 1160 and 1170. The fire spread from the reflected stares of Parisians stopped dead in their tracks, to TVs, cell phones and computers around the world.

For the French, the loss of such a recognizable piece of their culture is, in no exaggeration, a staggering loss. A visit to Notre-Dame is a required outing for school children, as Associated Press correspondent Lori Hinnant noted. For Catholics the world over, at the beginning of their holiest week, the blazing images of one of the religion’s most sacred houses of worship were gutting.

For others, it’s the history lost that’s the most tragic part of the Notre-Dame fire, or the beauty that the cathedral brought to the Parisian skyline. For me, and many more, the connection is more personal.

I found a much-needed moment of peace at Notre-Dame just five months after my father’s sudden and unexpected death in July 2008. I felt like I was stabbed in the gut and like my entire body was bled of color. But being in the presence of the cathedral’s utter and arresting grandeur brought me back to life. It was magnificent. Its demand for my attention was unyielding.

That December, my mom and I turned what should have been our summer family vacation into an escape from the home we shared with my dad on our first Christmas without him. We rebooked our flights and hotels, wordlessly packed suitcases with practical presents that were never wrapped and boarded a plane on Christmas Eve — a red eye from JFK to Charles de Gaulle.

On an exhausting Christmas morning spent traveling from airport to city center to hotel, we eventually found ourselves — sprawling tourist map in my cartographically inclined hands — exiting the Paris Métro on the Île de la Cité. As we approached Notre-Dame and its identical towers, the bells within it chimed softly in celebration of the holiday.

We spent nearly the entirety of Christmas Day in the church and escaped the bitter cold inside its arched stone passageways; focusing not on our grief but instead on the intricate masonry and what felt like thousands of poinsettias.

For a moment, my mother’s attention was drawn to an alcove dedicated to Mary. My parents and I, despite the many valiant attempts of my devout grandparents, never really took to religion. But on that day, in that most sacred of spaces, my mom slipped a donation into the candle box and with tears streaming down her face, lit one while I reached for her hand. I whispered “get out,” behind her head and lightly blew on the candle to make her laugh — an ode to my dad’s sacrilegious impression of the voice of God.

After hours spent walking up and down each corridor, peeking into every wing and marveling at the height and splendor of the central nave, my focus fell on the dreamy, watercolor effect the famed rose window had on Notre-Dame’s marble floor. I stood in the prismatic light, closed my eyes and felt warm for what felt like the first time since losing my dad.

Notre-Dame stood as a testament to the craft of architecture that previously survived the instability of the Middle Ages, the French Revolution, a Nazi occupation and the bombing and destruction of two World Wars. Today, it’s a building that is ingrained in the daily lives of the Parisians who live in its shadow, and an aspiration for the millions of others who dream of one day seeing it in person. Its importance in our collective memory is a testament to who we are as a civilization: Notre-Dame was never supposed to change, and that dependability was humbling and inspiring.

I will return to Paris for the first time this coming October, and I’m not looking forward to witnessing the destruction wrought by Monday’s fire firsthand. My heart aches for it already. But knowing that the two tall towers and that magnificent window survived gives me hope that what needs to be rebuilt of Notre-Dame one day will, and that it will once again stand as both a reminder of what was lost, and proof of our collective perseverance.