In New York, A Hand-Painted Sign Renaissance Is Underway

But will it last once the restaurant industry can resume normal business?

These days, as restaurants and bars find themselves in uncharted territory due to a global pandemic, it’s important for small, local businesses to convey to customers and neighbors what exactly is going on: If they’re closed, say so. If they’re open for takeout and delivery, when they’re open. Whether a mask is required to enter their premises. For a place like Brooklyn’s Olmsted, which has transformed itself into a relief center for restaurant workers who have been financially impacted by COVID-19, this simple communication is absolutely vital.

The restaurant, which is partnering with chef Edward Lee’s Lee Initiative to serve hot meals to anyone who needs one every day from 4 p.m. to 7 p.m., is currently displaying hand-painted paper signs in its windows to help get its message across in these bizarre times. “Free no-contact restaurant worker relief,” reads one, while another warns “No mask, no service.” The signs are the work of artist Olive Panter, who happens to be quarantining across the street.

“I was just watching this process unfold in front of me, of them being open without knowing that they were donating food, and slowly getting more and more angry about how badly people were social distancing,” Panter tells InsideHook. “And I’m a sign painter, and when I found out that it was for restaurant relief, I got in touch with them and asked them if they needed signs. I went over in the rain when there wouldn’t be anyone there, and I took my measurements and photographed what their information was. And then it was just a process of making sure that everything could be legible and seen from far away so people wouldn’t have to get up close, and making sure that people understood what was happening, because many people had no idea what was going on. And I could see from across the street that after the signs went up, people started lining up better. Now there’s a line almost every day. It was really just me trying to intervene in whatever way I could to make sure that my community was able to stay safe.”

Olmsted is far from the only Brooklyn institution relying on hand-painted signs to convey important information during the pandemic. Gold Star Beer Counter has had permanent hand-drawn signs since they first opened almost five years ago, but they’ve added a few more since the quarantine began to let customers know they’re still open for curbside to-go sales.

“We’ve had the hand-painted signs — our logo on the door and a little to-go window that we’ve had since day one — from the very beginning,” Gold Star’s Josh Van Horn says. “We used this really, really good sign painter, this guy Jon Bocksel. He’s great. When the whole thing came down with the COVID stuff, I mean, for us, we had to change our business model. We’ve always had to-go stuff, but we went from doing 30 percent of our business was to-go to 100 percent just immediately. Luckily, Jon was like, ‘Hey, I’m doing these paper signs to let people know what’s up.’ Of course, being in Brooklyn, we weren’t about having a loud exterior full of big-worded signs before. But right now, it really made a lot of sense. We’ve been around for a while and people know us, but with all the changes of hours, and what we’re doing and what we’re not doing, we had to blast it out there. And it just looked so good, too.” 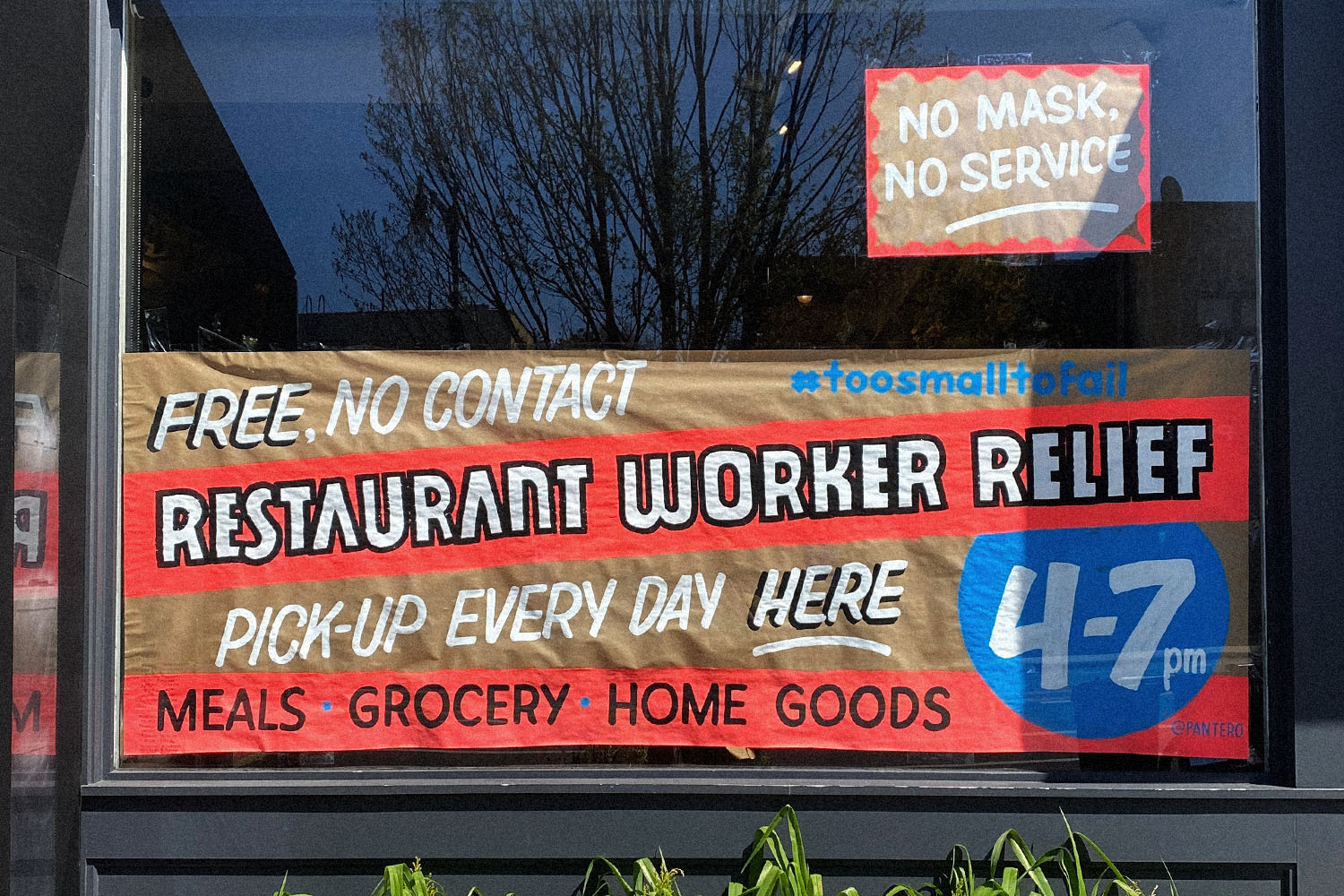 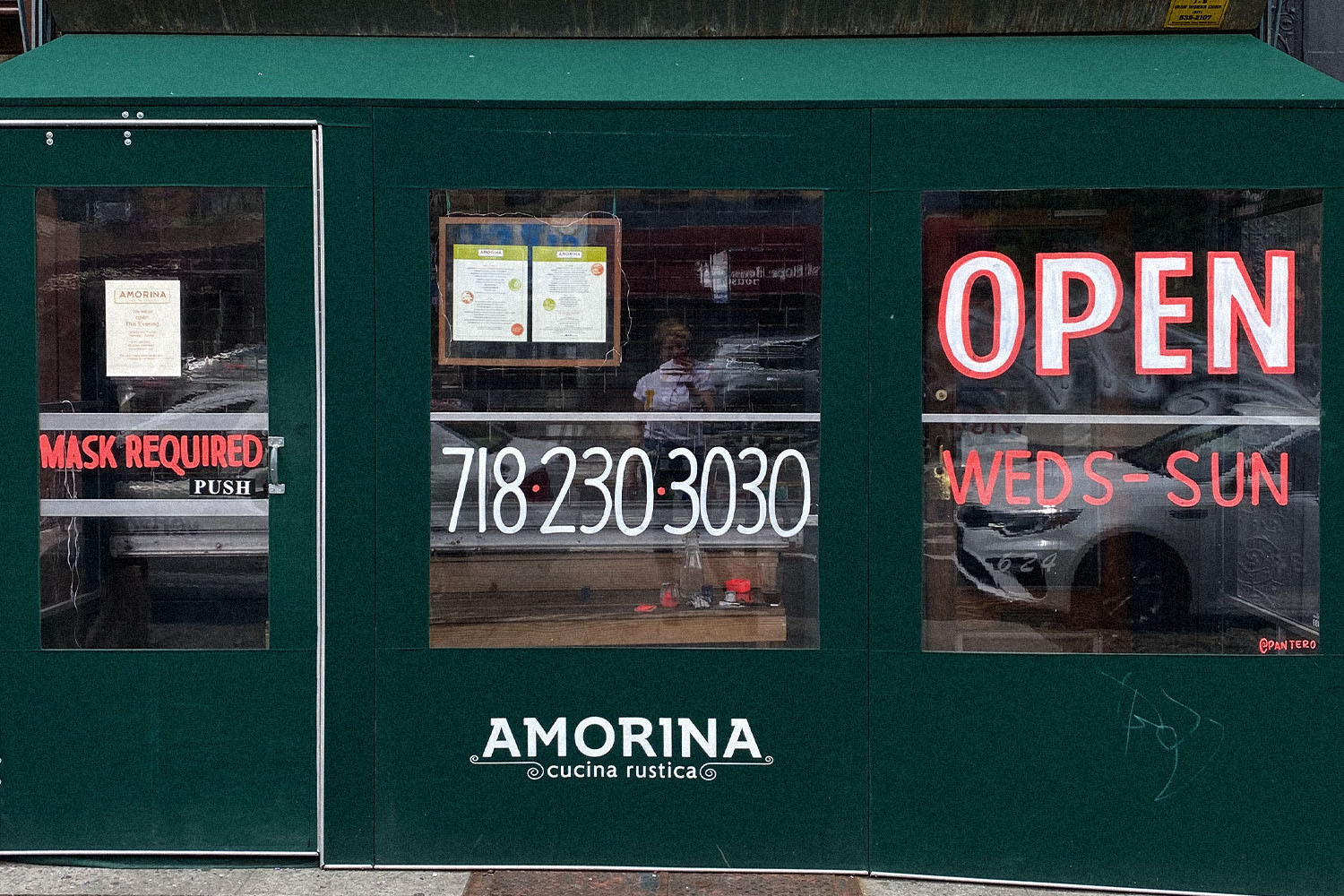 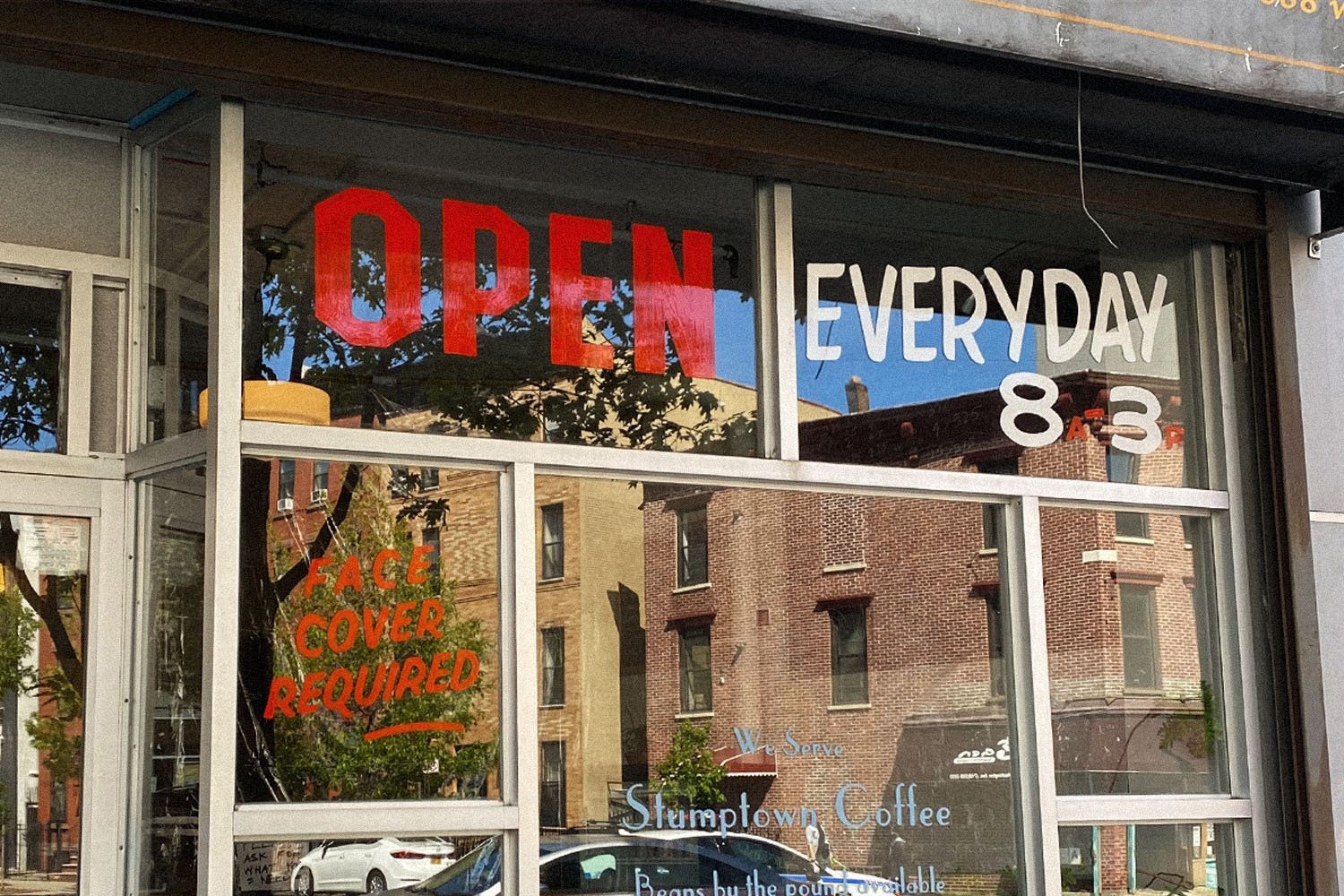 Even before the coronavirus, however, hand-painted storefronts were a growing trend in the area. Andrew Hurley, a sign-painter with Overall Murals, says he noticed an uptick in demand prior to the pandemic, something he attributes in part to social media.

“I think it has to do with a lot of stuff — a return to craftsmanship, a greater appreciation for handmade anything,” he says. “Instagram exploits what people think is cool. It also gives people access to something they might not otherwise have, and then that spreads it because someone outside of Brooklyn can see it on Instagram.”

Panter sees the rise of hand-painted signs as a reaction to a more digitized world, where automation can result in designs feeling a bit cold or detached.

“I think that it’s related to people without design training having access to being able to design and make their own signs, and everything looks the same now,” she explains. “And as we progress into this more digital, alienated space — and concurrent with a rise in farm-to-table offerings and more community investment — I think that people want to feel like every single aspect has a person involved in it. So if you have a hand-painted sign, if you have someone who drew the letters, it just brings humanity into every aspect of labor. It sticks out. It’s good for business, it’s good for community, it’s supporting local artists. And I think that communities are trying to build on themselves right now, and that’s part of it.”

For Van Horn, the decision to go with hand-painted designs on Gold Star Beer Counter’s door and window was two-fold: the aesthetic appealed to him, but it also was a matter of practicality.

“There’s a much more natural look to it,” he says. “There’s something to be said about, when you’re looking from inside out, you’re looking through the logo, you can see the brush strokes on it. It has a really handmade aesthetic to it that you can’t reproduce a brush stroke on digital. It doesn’t cross over as much. Professional sign painters are highly skilled, and they know what they’re doing. The signs last a really long time too. They get a lot of wear and tear. Our one on the door gets a lot of wear and tear, and it holds up really well.”

Even when that wear and tear does finally start to take its toll, the result is often a cool, antiqued look that Hurley often finds to be better than the original work.

“A hand-painted sign is always gonna be more special,” he says. “You can paint the same thing 12 times, and it’s never gonna look the same. There’s always gonna be those human differences. Vinyl cracks and peels, but when a hand-painted sign ages, sometimes they look even more beautiful. You don’t get letters falling off like you do with vinyl; instead it just gets this really cool, faded look.”

For now, though, there’s no telling how long business owners like Van Horn will have to keep their pandemic-specific signs up.

“We don’t know when we’re going to reopen back up,” he says. “There has not been a guideline for it. We’re only 900 square feet. So [with social distancing] we’re going to fit 10 people in here total, when normally we can fit 35. We’re still going to rely on our to-go business more than before. And so, I think that we will definitely be keeping them up for the duration until we can open up fully. Before, people have known us a place that is open from 12 to 12, and as our hours change, I think that we’ll have John make new signs to alert people. As a business person, it’s good to stay consistent, but when you can’t because of the unknown, to be able to brightly and boldly tell people what’s up is really important.”

The future is equally uncertain for sign painters themselves. Hurley has been laid off for two months (though he says he’s been told his company plans to rehire him when they can). Panter has been working steadily — while being careful to practice social distancing — but she’s worried about what lies ahead in the long term for the industry.

“Sign painting’s commercial work, and if all of the restaurants close and if all of the stores close and all of the storefronts are open and vacant, then there isn’t work,” she says. “I think that as all of this has happened, no one understands how much trauma anyone’s actually sustained. When people reopen, people are going to want things that feel like home. And another Helvetica vinyl sign does not feel like home. Industrial design doesn’t feel like home. So I hope that there’s more and more hand-painted signs … I think that there are a billion different ways that sign painting infiltrates our culture, and people haven’t been paying attention that much. But sign painters are still working. It’s an imperative part of how we communicate, and I think that it’s only increasing in value.” 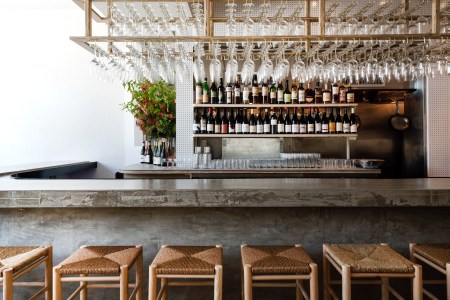