Van Halen: Why the Original Line-Up MUST Return to Save Rock ‘n’ Roll

The year ended with startling news. The kind of news that makes old men remember the elastic arrogance and sunny ignorance of their youth, and old women recall a time when life was so easy and full of charm that they could smoke Merit Lights in the scrubby grass behind the cafeteria, wear culottes, and sigh over the roman curls of Mark Goodman.

As this information — still unconfirmed, mind you — began to sparkle and ooze over the webbernet, every white American over 45 gasped with excitement, releasing a sound oddly similar to the colossal downward “Thwoooooooo!” bass run in Gerry Rafferty’s “Baker Street.”

If you believe that rock’n’roll is a rainbow-belching Yeti wearing a puka shell necklace and a completely un-ironic California Jam II concert tee while holding a liter of Mateus Rosé, then you already know why this is such an important event.

When the brick-colored fog clears on the final day, when the mud-orange skies dissolve into a soot that can sustain no echoes of life or joy, when the dust from the earth meets the dust from the sky, when the mountains meet the seas and the life-salt of ocean becomes the lifeless talc of the desert, the creator (or at least the 22 year-old Nephew of The Creator who lives in the Creator’s paneled basement, sleeps on a sofa bed framed by posters of Farrah Fawcett and the “Hang In There!” cat, and when really high can explain, at great length, why you really really need to spend more time listening to Rainbow and UFO) will point its magical, misty finger at Roth-era Van Halen and say, that is rock’n’roll.

See, when rock was separated from it’s original intention and purpose — as a way to give voice to the rhythmic and melodic legacy of America’s disenfranchised — the very best status it could attain was ridiculousness. Ridiculous, gigantic, monumental, cartoon Golems striding across the earth and saying boo to the townspeople, spandex-wearing Thor-men throwing fake lightning bolts at teenagers who should have been out changing the world, but instead were getting stoned and watching fake gods playing giant chords under the blue and yellow lights of arenas in the shit part of town.

That’s the thing with rock: It rose from the throats, drums, stomps, shrieks, sighs and cries of slaves and sharecroppers, coalminers and dirt farmers, the sons and daughters of peat smoke and chains! Every shift and scratch of rock’n’roll bears this beautiful legacy.

But as the bitter and beautiful baby aged, as she was adopted by people who had never known hunger or discrimination, she came to stand for something else: The simplest and most accessible totem of middle class faux rebellion. Rock’n’roll became the repository of the Easy Anthems of The Culture Wars, a way for the conformists of the future to separate themselves from their parents.

Which is to say that white people did, in fact, ruin rock’n’roll by co-opting the deeply and essentially political nature of the animal. Except that’s not entirely true, because whitey also made some absolutely brilliant sounding noise.

White People made rock’n’roll not only meaningless but also a symbol of absolutely corrupt and crappy middle-class values. White people took this incredibly powerful tool and made it purely an instrument with which to piss off their parents, maaaan. After that catastrophe, all we are left with is THE RIDICULOUS, the beautifully ridiculous, our SAVIOR The Ridiculous, the brilliantly BIG noise that screams of cheap thrills and vagina dentata!

From the Sonics to the Stooges to Slade to the Troggs to Deep Purple to thee Kings of the sweaty thumpy ludicrous, the Cramps, we found an ecstasy. We found a release that could not be achieved anywhere else except in the Three Chord Burlesque, in the sticky-floored Live Peeps of Loud Arena Land.

And we must celebrate the band that did that best, the band who made the most perfectly ridiculous and magically engaging rock’n’roll of all time. 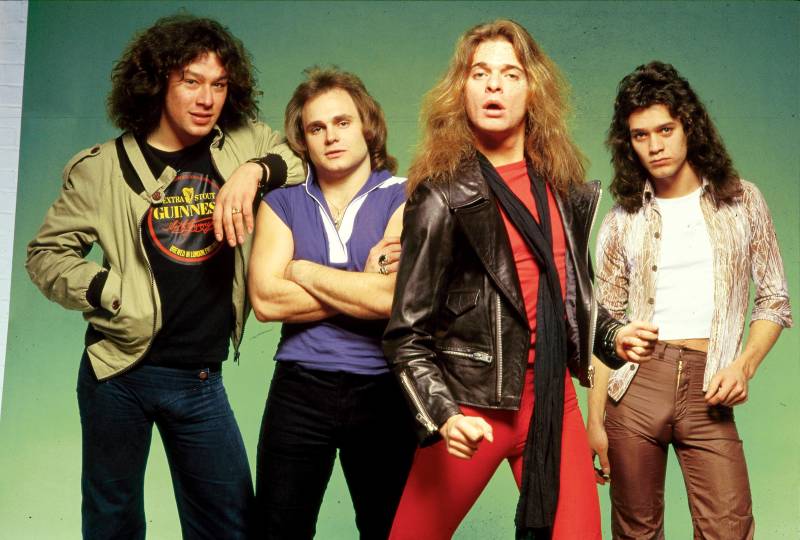 It just sounds so good, so right, it is like the most extreme caricature that transcends caricature and achieves an absolute beauty and transcendence. Simultaneously simple and baroque in a way so very, very few bands can achieve, the music of Roth-era Van Halen is muscular aural candy. It is full of depth and mischief, as peanut-butter-chunky as the U.K. Subs, as filigreed and wedding cake-iced as XTC, as full of glassy shimmer as The Go-Betweens, as loaded with cock-thrust swagger as Judas Priest.

If you were a teenager in the 1970s, you know what a truly awful time this was. The very air was full of garbage music masquerading as genius, smug pompous crap that smelled like patchouli and horsesh*t, like Dust in the f*cking Wind ghastly, wheezing, Europe ’72 and the worst album in recorded history, ELP’s Brain Salad Surgery, an album that is a stain against the very idea of recorded music. Honestly, and I mean this, I would rather listen to The Shaggs Play Along With Hitler’s Recorded Speeches than ever hear “Karn Evil 9” again.

Having said that, this is what you need to know:

Every gruesome, unnecessary, time and money wasting, drug and mammon fueled indulgence of 1970s music, every unnecessary drum solo or keyboard riff or gong hit or horrifying lyric about Mordor or Hobbits, even the entire existence of Kansas or The Outlaws, is justified and forgiven just for the first two minutes of “Everybody Wants Some” by Van Halen.

If every awful, hideous, hateful, Steely Danful and Grateful Deadful and Andrew Gold-en and David Crosby-ian wretched squeak and squawk of pathetic self-indulgence of the entire decade existed just to make those two minutes possible, well, dammit, I’ll take it. Because those two minutes are everything, I would (literally) trade every minute the Beatles ever recorded just for those two minutes, those thumping, squealing, chunking, kicking, split-leaping, fat-chord feedbacking screams of desperation and apes-whacking-on-megaliths garage rock.

And it’s not like this was an isolated moment. True, unlike far inferior bands, Roth-era Van Halen never made one single great front-to-back and back-to-front album (then again, neither did Neu!, the greatest rock’n’roll band of all time). But they created song after song that blended dumbass riffing, sonic extremes, and insane choruses with production and mixing that was so absolutely perfect that it was truly incandescent. Today, four decades after its creation, it still makes you grip the steering wheel with a childish, snow day glee.

Oh, but I hope it happens. I cannot think of one single reunion I would want to see more (though, for the record, I wouldn’t mind seeing Henry Cluney and Jake Burns get onstage again as Stiff Little Fingers, or an Eric Bloom/Buck Dharma/Albert Bouchard/Joe Bouchard Blue Öyster Cult).

Even if it does not happen, this fact, written in glitter and fools fold, still remains:

On the Final Day, when the last rosy finger of the last sunset has tickled the skies over our bruised and doomed experiment in sentient civilization, the new, unimaginable god, the conquering god, the one who laughs at you like you were an inadequate Ozymandias, the one who will say, “You built civilization after civilization seeming unaware that the only certainty is that they will all one day vanish”…on this final day, this god will look at your whole silly middle class white rock era, and go, “Ah, there is David Lee Roth-era Van Halen, they got it right.”

Many thanks to the legendary Jack Rabid and The Big Takeover, for essential help assembling this bus plunge of words. If there is a Rock’n’Roll Heaven, Jack will be standing at the gate asking, “What’s your favorite Adverts B-Side?”

Fred Couples Slams LIV Golf as Saudi Series Accuses Tiger Woods of Doing PGA Tour's Bidding
LIV Defectors Are Raking in Winnings, Except for Phil Mickelson
10 Chicago Chefs on What "The Bear" Gets Right (And Really Wrong)
Make Buttermilk Biscuits at Home With the Popeyes Founder's Secret Recipe
The Twilight of the Hellcat

Navy SEAL Kaj Larsen's Guide to Becoming a Better Swimmer
The New “A League of Their Own” Is Nothing Like the Original — Which Is Why It’s the Rare Reboot Worth Watching
What It's Like to Sail the Mediterranean With Viking for 10 Days
The 20 Best Gifts to Give Her for No Reason Whatsoever This August
13 Lightweight Pants You’ll Actually Want to Wear for the Rest of Summer
The Hitmen of “Bullet Train” Are an Accidental Masterclass in Personal Style
For Top-Notch “Ant Caviar” and Agave Worms, Head to These Miami Restaurants
DC’s 5 Most Notorious Hotels
These Superb Middle Eastern Wines Are Pretty Much Exclusive to This Michelin-Starred Chicago Restaurant

Chants, Cheers and Beers With the Most Powerful Fans in Sports
Malcolm Gladwell Has a Point: WFH Isn't Always Healthy
The Reddit Group Helping to Fund Herpes Vaccine Research
There Are Too Many Protein Powders. These 7 Stand Above the Rest.