Back in the days before any would-be rock star could whip up thousands of concert posters at Staples and paper the town with them, there was a real art involved in letting your peers know that you were about to rock and they should salute you.

At first, it was all about getting the names out there—simple color schemes, bold black lettering, and all the information a teenage fan (or his chaperone) might need to make the plans to go. As time went on, concert poster producers became more liberal with their designs, adding in a rainbow of colors and, at times, even mimicking the actual music they were advertising with their inventive designs. Case in point: posters from the psychedelic 1960s often feature DayGlo color schemes and lysergic fonts.

Now, surely, you could go to any nostalgia shop at any major mall and pick up vintage concert poster knockoffs for $5-$10. Hell, your kid might have a few posted on his college dorm room wall. But where’s the fun in a fake? As part of its Nov. 12 “Entertainment and Music Memorabilia” signature auction, Heritage has included a treasure trove’s worth of early concert posters, spanning mostly the ’50s, ’60s, and ’70s, featuring a panoply of rock’s most famous names: Jimi Hendrix, Bob Dylan, and The Beatles.

RealClearLife pored over Heritage’s featured lots and picked its 10 favorites, along with descriptions. Check them out below. 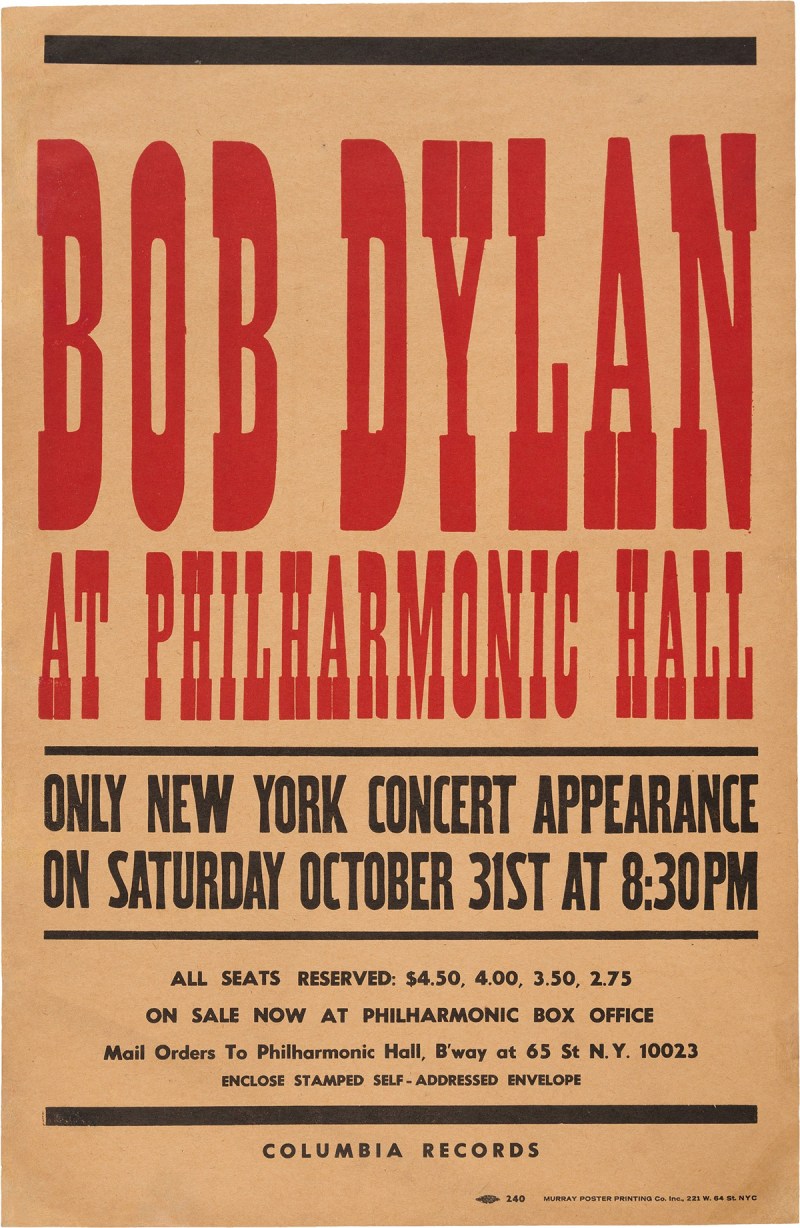 1964 – Bob Dylan – Recent Nobel Prize winner Bob Dylan ruled the roost in his home base of New York City in the early 1960s, playing Greenwich Village spots like Café Wha? and the Gaslight, spreading the gospel of folk music to the masses. The same year that The Beatles played The Ed Sullivan Show, Dylan was still making the rounds in NYC, playing Philharmonic Hall on Halloween night. (He wouldn’t frighten his fan base for another five months, when he decided to go electric at the Newport Folk Festival.) Bid here. 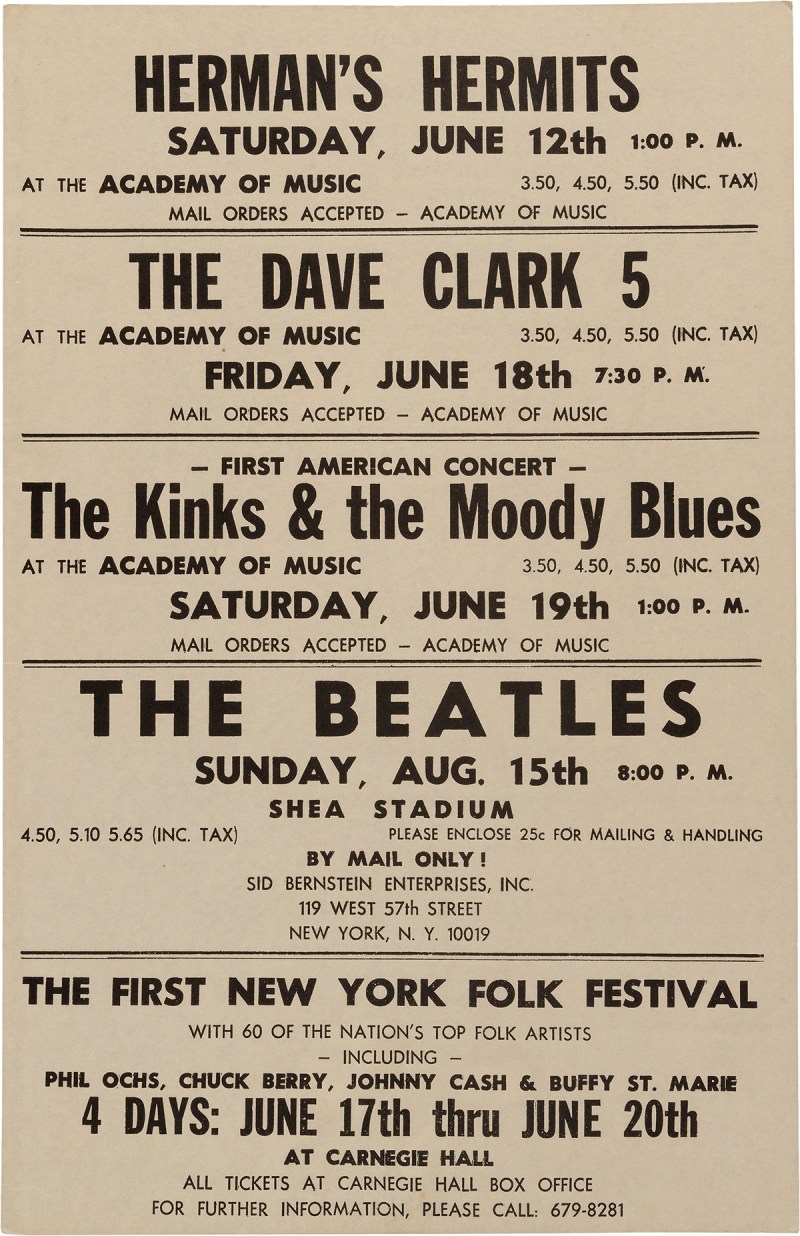 1965 – The Beatles at Shea Stadium (and Others) – Back in August, the legendary Shea Stadium gig turned 51. Playing to nearly 56,000 fans, the Fab Four were all but drowned out by the cacophony of hair-pulling screams. This is one of the original posters that was likely posted somewhere in New York City prior to the show. Notably, it also features an announcement of fellow iconic British band The Kinks. Bid here.

1966 – The Velvet Underground and Nico – One of the most influential East Coast bands of the ’60s, The Velvet Underground was managed by pop artist Andy Warhol, who suggested they have German singer Nico front the band. This concert poster pre-dates the band’s 1967 debut album, The Velvet Underground & Nico, which includes some of their best-known tracks: “Sunday Morning,” “I’m Waiting for the Man,” and “Venus in Furs.” The “Exploding Plastic Inevitable” was a primitive, traveling multimedia circus of sorts that Warhol brought on the road. Bid here. 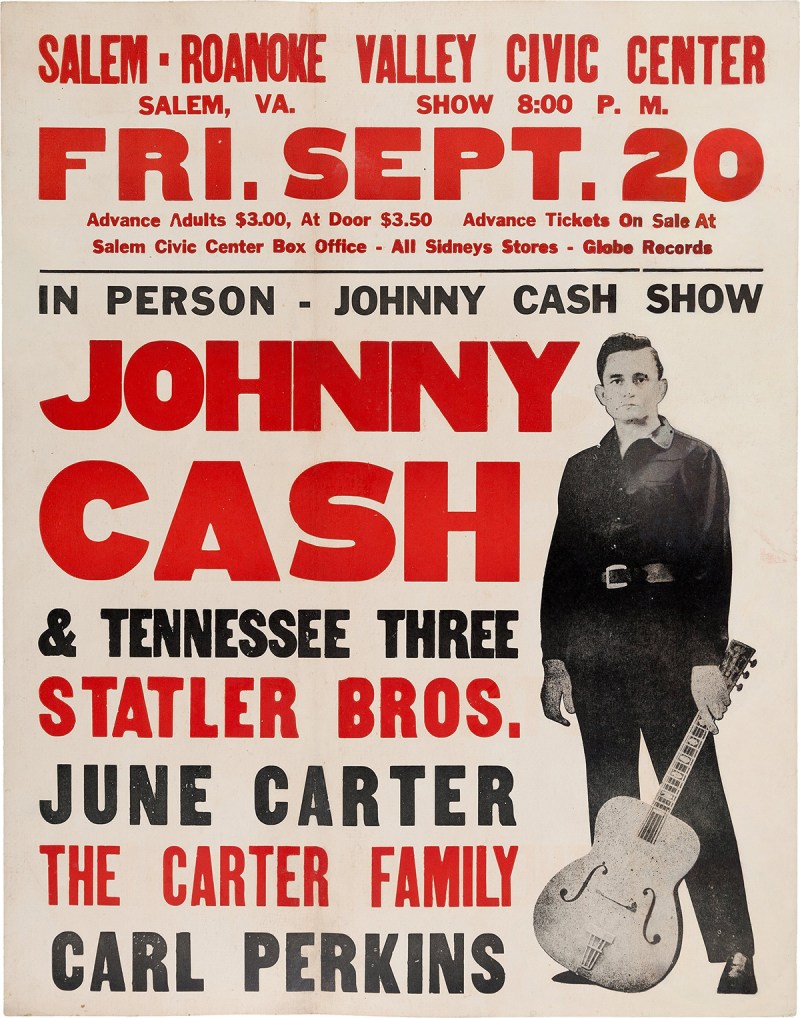 1968 – Johnny Cash – One of the first country-to-rock crossover stars, Johnny Cash took his baritone vocals and rockabilly stylings to Folsom Prison in January of the same year. As Heritage notes, what makes this poster particularly unique is that it was printed before Cash and his wife June Carter were married. So even though the concert took place after their nuptials, she’s still listed on the poster as “June Carter.” Bid here. 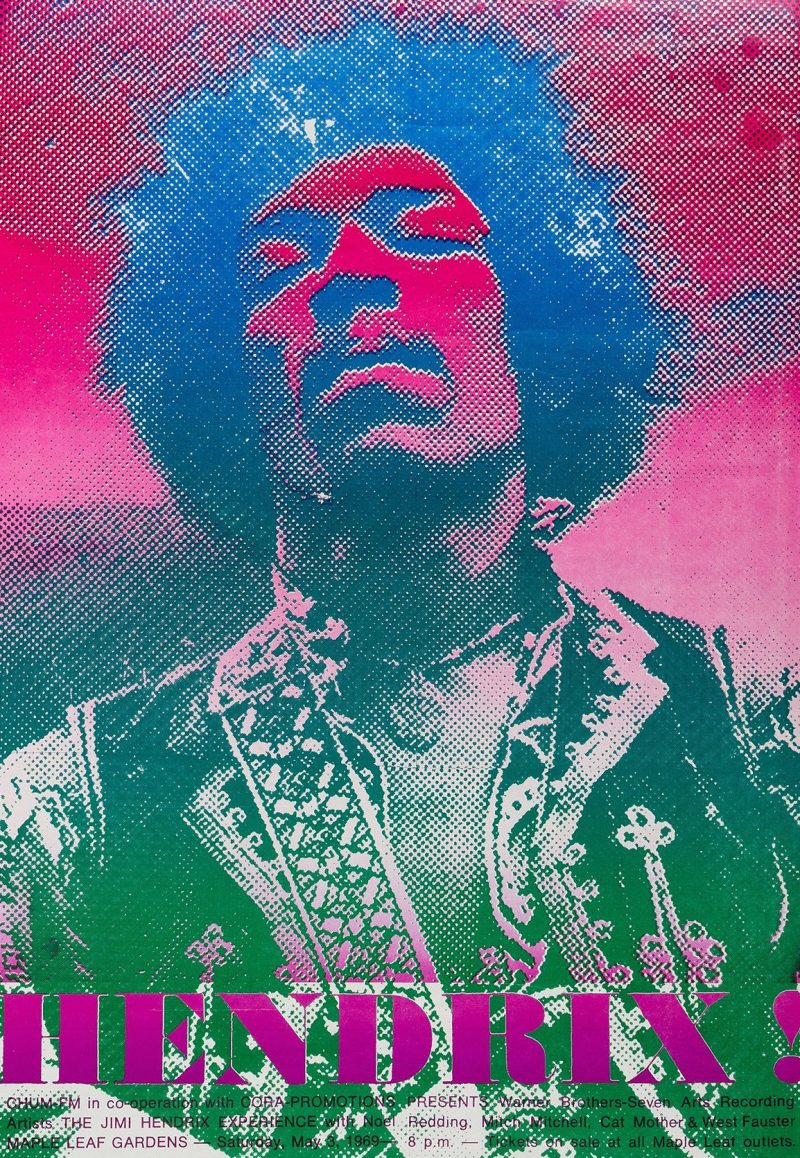 1969 – Jimi Hendrix Experience – This poster advertises the Jimi Hendrix Experience live at Toronto’s Maple Leaf Gardens in May 1969. According to Heritage, on the day of the show, Hendrix was arrested at the airport on suspicion of drug trafficking, but was released on bail to play the show (he was later acquitted). By that point, Hendrix and his band had released all of its classic albums, including Are You Experienced? (1967), Axis: Bold as Love (1967), and Electric Ladyland (1968). Bid here. 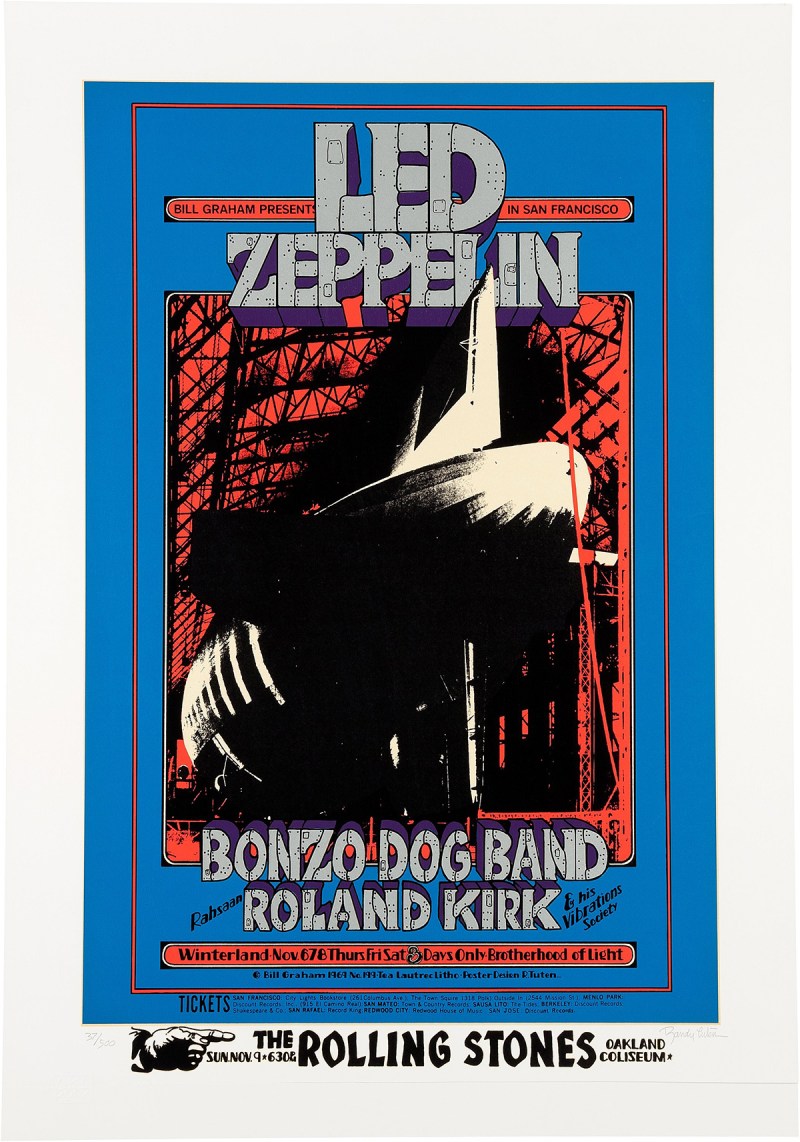 1969 – Led Zeppelin/The Rolling Stones – These days, watching The Rolling Stones perform one show by themselves is a treat. Now, imagine if they were on a co-headlining bill with fellow countrymen Led Zeppelin. Said show took place at the Oakland Coliseum on Sunday, November 9, at 6:30 p.m. Presented by Bill Graham, it was the fourth show in a series Zep played on the West Coast. A bucket-lister for those in attendance, for sure. Bid here. 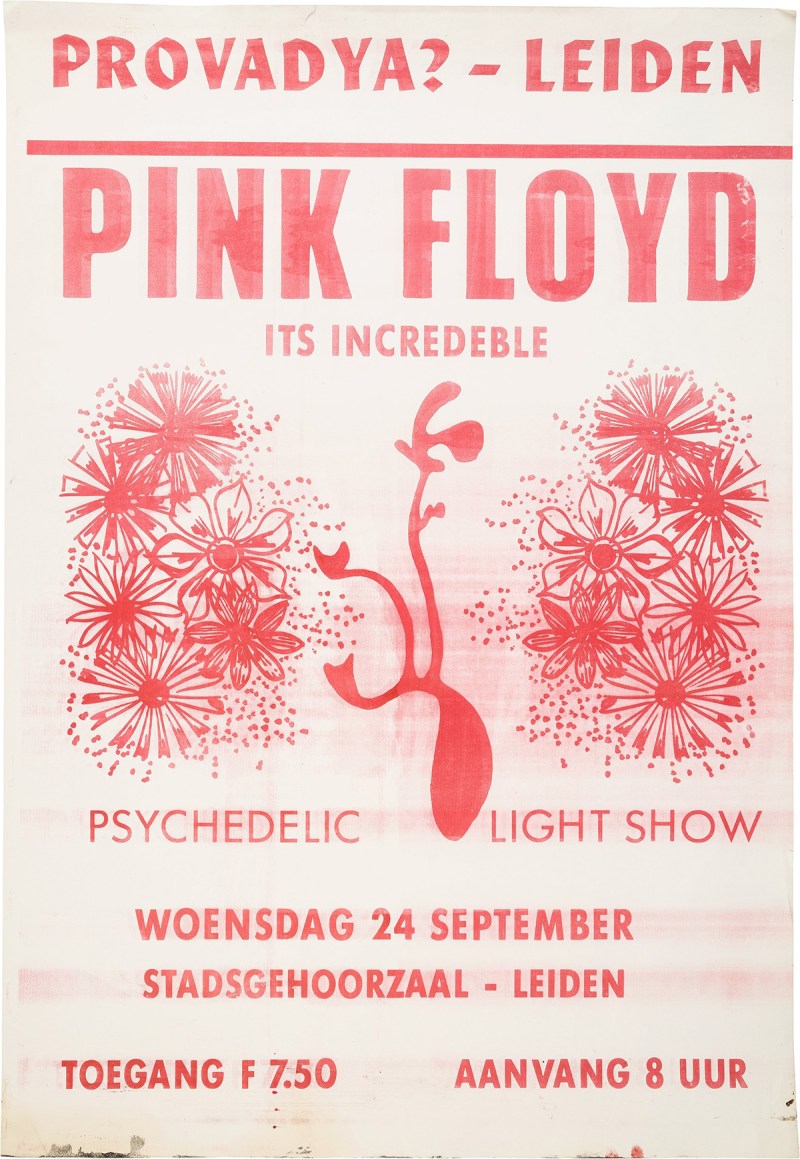 1969 – Pink Floyd – Having recently swapped out psychedelic frontman Syd Barrett for David Gilmour, who would be crucial to their most famous albums, Pink Floyd was well into its trippiest, jammiest phase, with albums More and Ummagumma out that year. (Dark Side of the Moon wouldn’t come out for another four years.) On this rare concert poster, advertising the band’s European tour stop in the Netherlands, its producer makes mention of the band’s “psychedelic light show.” Bid here. 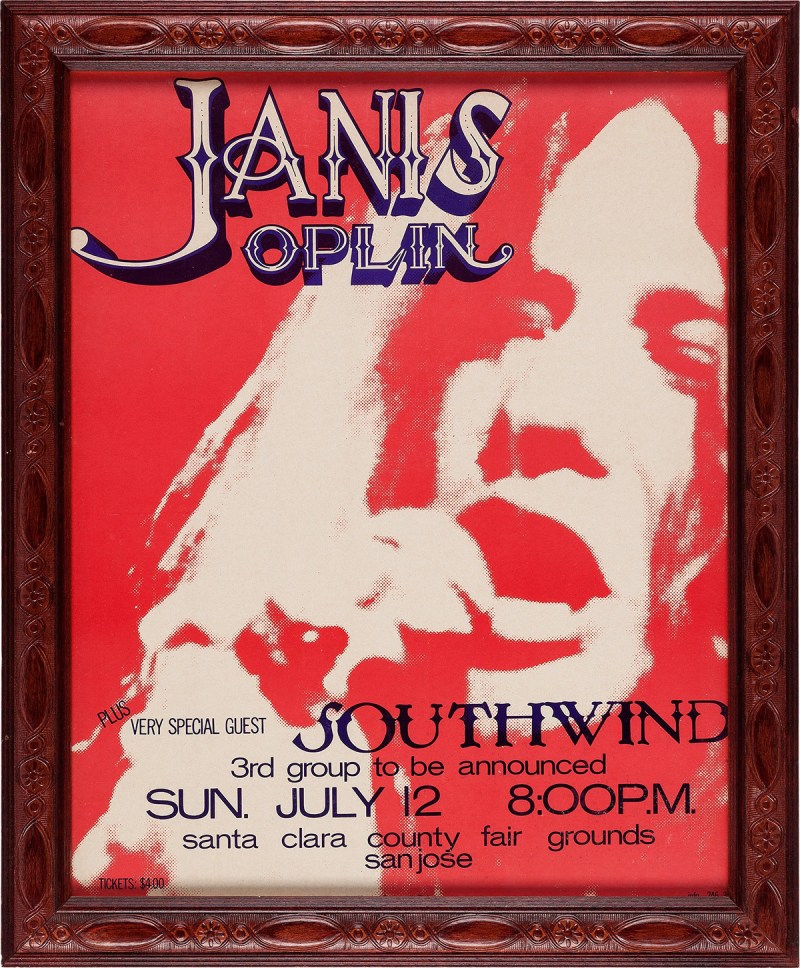 1970 – Janis Joplin – Time forgot opener Southwind, but not headliner Janis Joplin, who was appearing at the Santa Clara County Fairgrounds in San Jose, California. Still six months away from releasing her classic solo set, Pearl, Joplin was riding the wave of success she saw after appearing at 1967’s Monterey Pop Festival and 1969’s Woodstock. We wonder who the “3rd group to be announced” was. Bid here. 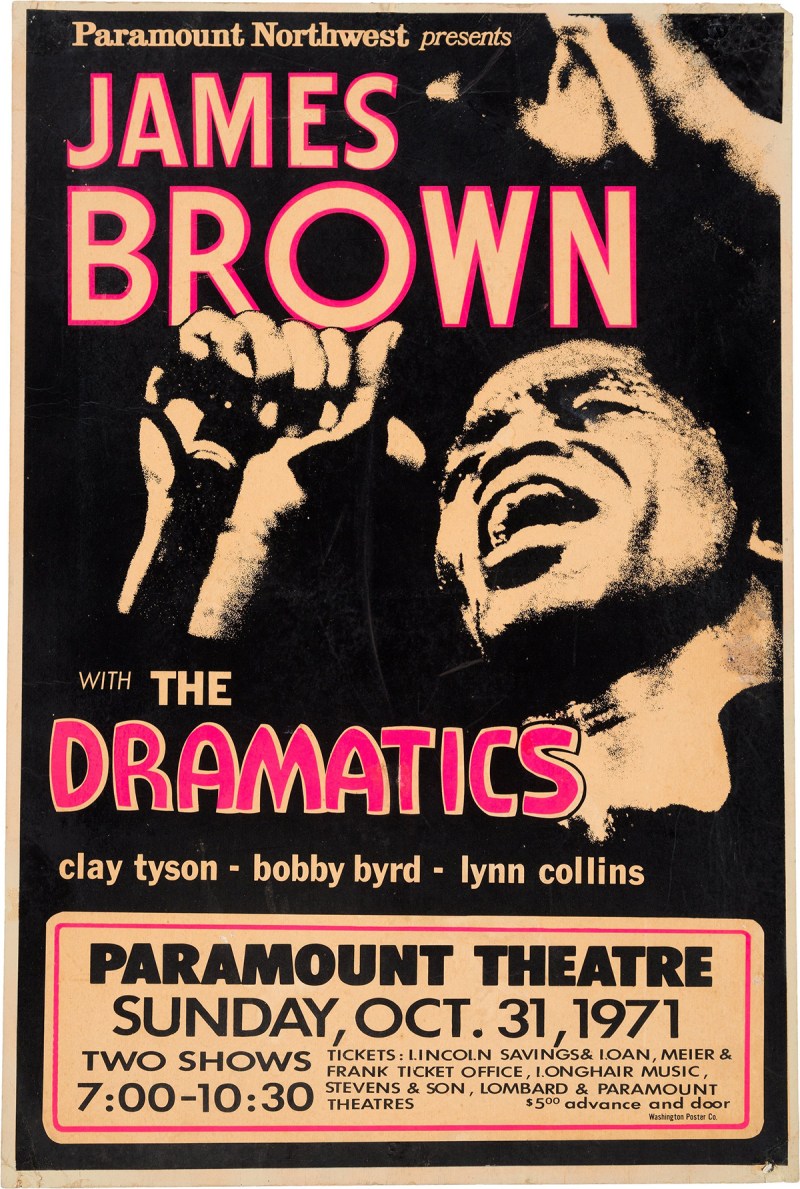 1971 – James Brown – Nobody worked harder at his art than the Godfather of Soul. James Brown also has one of the most prolific outputs in rock history, with a discography that would make any fan’s head spin. By 1971, he’d released many of his most beloved tunes — including “Papa’s Got a Brand New Bag,” “I Got You (I Feel Good),” and “It’s a Man’s Man’s Man’s World” — but he was still churning out albums like Sho Is Funky Down Here, which cracked the Billboard 200 that year. Opener The Dramatics was riding the success of singles like “Whatcha See Is Whatcha Get,” which came out that year. Bid here. 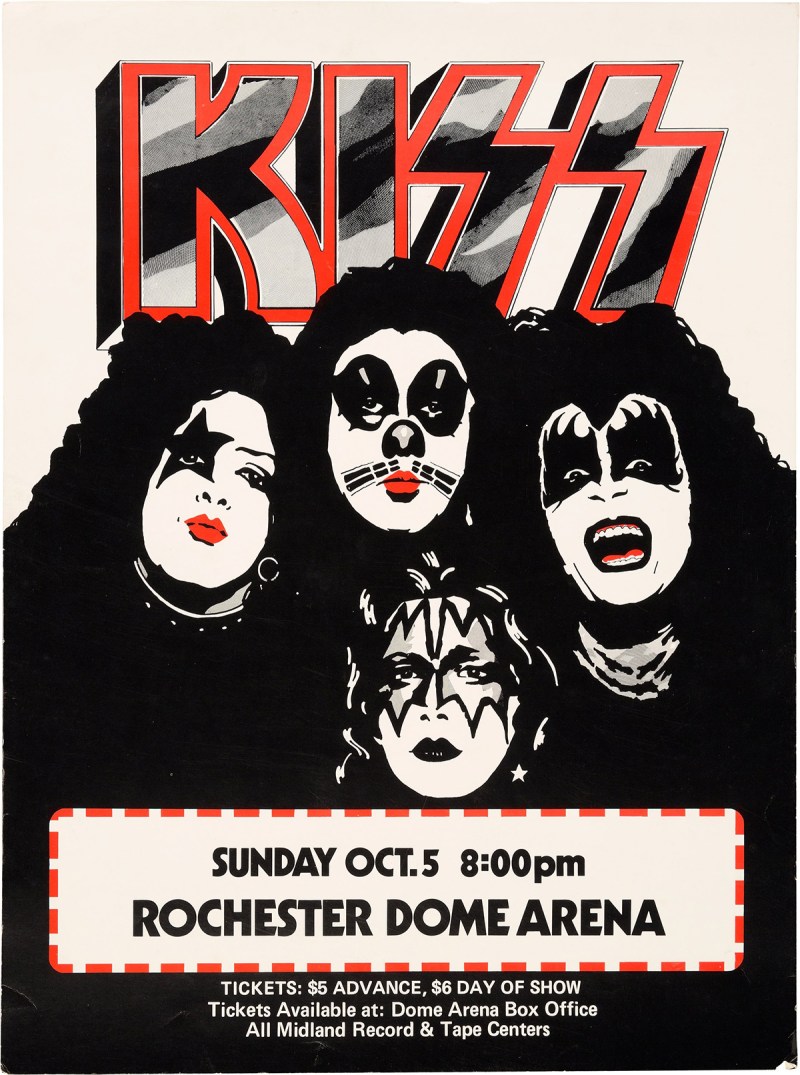 1975 – KISS – KISS silenced all the haters in 2014, when the band was inducted into the Rock and Roll Hall of Fame. (Despite their questionable place in greater rock history, the band influenced countless modern rockers with their elaborate stage shows and power-chord-heavy numbers.) At the height of their arena rock popularity, this concert saw the band roll into Rochester, New York, in early October 1975. The show pre-dates their breakout in 1976 with album Destroyer, but it’s possible that they were already road-testing some of its delicious tidbits like “Detroit Rock City” and “Shout It Out Loud.” Bid here.

To browse all of the concert poster lots, click here.