'Jeremy Spencer' is hard to find because it was hard for public to appreciate.

The Jeremy Spencer Band performon stage at the Marquee Club, London, 1978. Jeremy Spencer was in the original line up of Fleetwood Mac from 1967 - 1971. (Photo by Erica Echenberg/Redferns)
By Tim Sommer

The eureka moment came on a seemingly-normal September day in the age ethereal ubiquity. The sky was the color of new slate, and the air was still heavy with the watery weight of summer camps and roll-down window car rides. As usual at the time, I was thinking about the complete superiority of Roth-Era Van Halen to any other rock band that ever existed  — well, with the possible and occasional exception of Motörhead, Eddie Cochran, Huey Piano Smith and The Clowns, and Marc Riley-era Fall. (I think about this all the time, despite being an adult. Don’t you?)

But then came the sudden realization of  the Utter and Total Weirdness of Fleetwood Mac.

They may have been a gentle astringent in our post-FM culture, and that when (some of us) were in High School they were as common, comfortable and as unthreatening as Chuck Taylors or Chuck Woolery (back then) — or perhaps Chuck Woolery wearing Chuck Taylors. But Fleetwood Mac are one of the weirdest bands of all time.

In fact, their post-1975 status as Poster Boys for Pleasantly Dysfunctional Pop Occasionally Wrapped in Black Satin Sheets and Raised Eyebrows has always seemed like a paper-thin veneer. This is revealed not only in the surprisingly bitter fights they engage in even as senior citizens, but also in the investigation of the artsy, billowy, quasi-emocore depth of some of their most famous work.

Sit down and really listen to Tusk sometime. Sure, people chatter on and about Lindsey, but that album is actually owned by Christine McVie and Stevie Nicks. Their material on Tusk has a melodic darkness, a burnt-out church under the Northern Lights emptiness that makes it as a edgy and real as Faith-era Cure, ghostly Cape Breton balladeers like Mary Jane Lamond, the strange and magical Kletter sisters, and the chimey gothic of Fables of the Reconstruction. Seriously, man, do a mix of Tusk with just the Christine and Stevie tracks, and you will be like Holy F*ck.

But that’s not even the tip of the iceberg. Long before Fleetwood Mac found a path to platinum sadness in the Hollywood Hills, they had already lived multiple lives and produced astounding music. Since I am grateful for whatever time I have with you, I will not test your attention by detailing the many strange and talented characters who have been in Fleetwood Mac between 1967 and today (18 “true” band members, believe it or not).

It is, however, worth noting (rather incredibly in this Quick Click era) that the group did not have a hit album in America until their 10th LP (!) — and as recently as 1995 made a studio album that did not even crack the U.S. top 200. I told you, Fleetwood Mac is odd, rewarding, and deep.

This article deals with Fleetwood Mac circa 1970, when they were probably the best hard blues pop band that ever existed, the masters of a tough, sinewy, earnest and fiery astral boogie.

During that time, band was fronted by three remarkable guitarists/vocalists — Peter Green, Jeremy Spencer, and Danny Kirwan — and supported by the greatest rock rhythm section of all time, Mick Fleetwood and John McVie (who played, and continue to play, as if they were going to be fined if they played one single unnecessary note). By 1970, Fleetwood Mac had established themselves as a popular cult act on both sides of the Atlantic and were recording the kind of fiery, bruising, inventive music that would make them majorly influential on everyone from the Beatles to Judas Priest, Santana to the Rezillos. (For a little more insight into this period in Fleetwood Mac’s long career, check out this piece I wrote when Danny Kirwan passed earlier this year.)

And it was in 1970 that they recorded the absolute weirdest Fleetwood Mac album, an LP so strange that not only have you likely never heard of it, it hasn’t even been in print for decades.

Okay, true: It wasn’t actually released under the name Fleetwood Mac. But Jeremy Spencer was recorded entirely by Fleetwood Mac in their prime ’70 line-up: Fleetwood, McVie, Green, Spencer, and Kirwan. (By the way, I’ll avoid the subject of Spencer’s later history with the cult, Children of God, for the purposes of this column.) 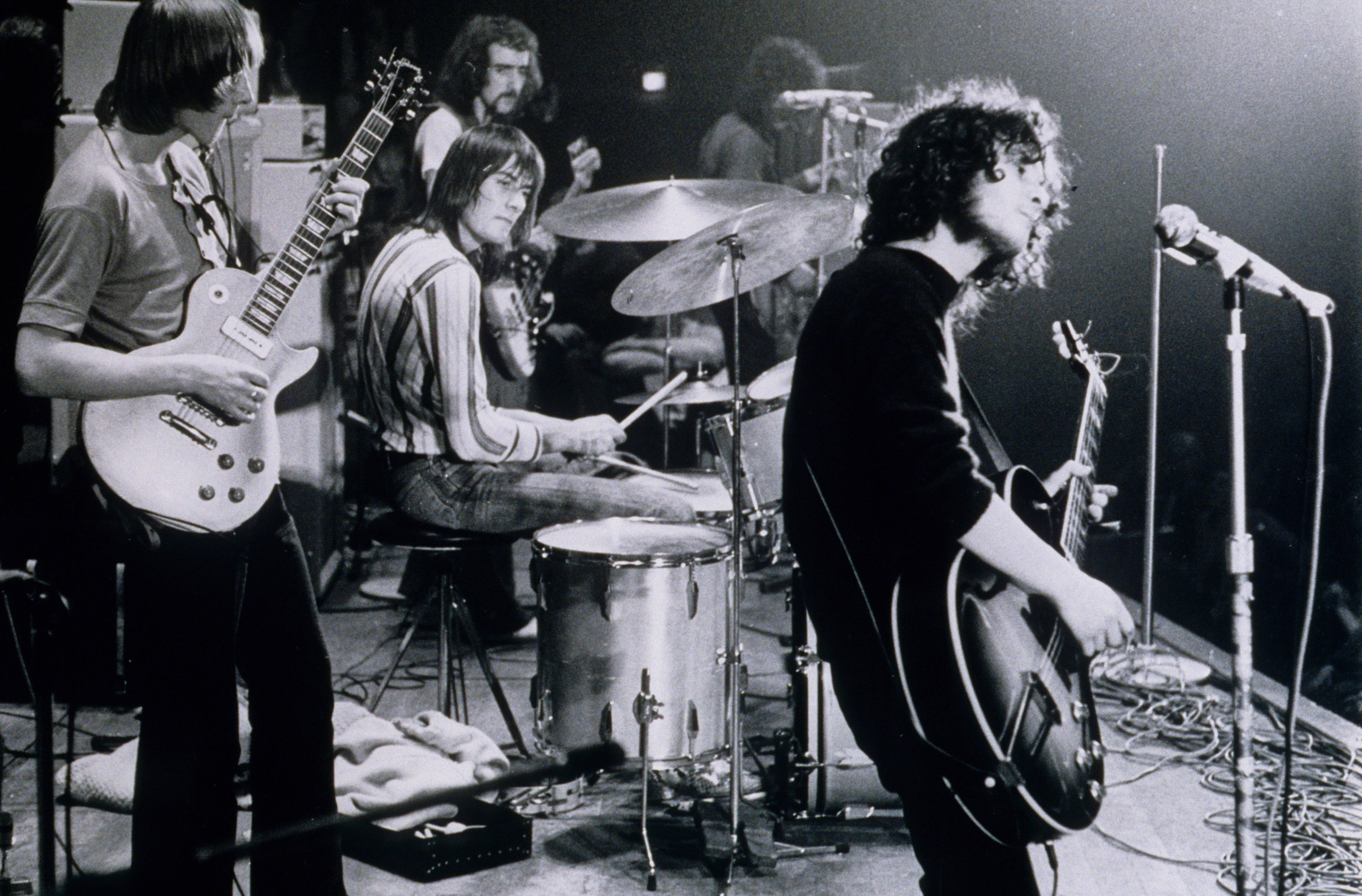 Jeremy Spencer is a delightful and delightfully weird album that has dated extremely well. Imagine the Muswell Hillbilly/Preservation-era Kinks produced by Joe Meek (which is pretty much exactly what Jeremy Spencer sounds like), or Wilko Johnson and Sha Na Na taking a handful of mushrooms and collaborating with Wilco—because it sounds like that, too. Or maybe Jeremy Spencer sounds something like the Lovin’ Spoonful pretending to be Elvis, Buddy Holly, Dion, and Eddie Cochran.

The bizarre and wonderful Jeremy Spencer has a fairly straightforward point of origin.

Frequently in their live shows, the Green/Spencer/Kirwan-era Fleetwood Mac would play some seriously basic ‘50s Memphis/New Orleans type rock’n’roll. These bits, often the encores, would feature Jeremy Spencer on vocals, channeling his best Elvis/Little Richard/Jerry Lee Lewis (excellent examples of this can be heard on “Great Balls of Fire” and “Tutti Frutti” from ’69-era live albums recorded in Boston and Los Angeles). Occasionally, this side of Mac snuck it’s way into the studio: In 1969 the group released “Somebody’s Gonna Get Their Head Kicked In Tonight,” two-and-a-half minutes of raw, Eddie Cochran-via-Elvis proto punk that is, without a doubt, one of the greatest things Fleetwood Mac ever recorded.

Soon afterwards, Fleetwood Mac decided to record an EP of Spencer-fronted ‘50s rock homage, to be included with their forthcoming third studio album, Then Play On. Ultimately, this idea was dropped, but the homage/parody EP concept expanded into an entire album, which was released in early 1970 as Jeremy Spencer.

Jeremy Spencer is a profound and effective reaction to the flowery, progressive and “serious” music of the late 1960s and early 1970s. Rather, it has far more to do with the boogie of the Flaming Groovies, Canned Heat, Captain Beefheart, or even the MC5; and it even anticipates the back-to-basics space-billy of Mott the Hoople and Bowie/Ronson, and ‘50s-worshipping glitter acts like Showaddywaddy, David Essex, and Gary Glitter.

Despite it’s peculiar conceit (Jeremy Spencer feels a bit like flipping between oldies stations), the album is not a silly, mocking, or casual. Perhaps most bizarrely, in it’s careful, loving and energetic updates of rockabilly, greaseball pop, and doo-wop, it actually truly resembles some of Lindsey Buckingham’s work. In fact, Jeremy Spencer connects the 1960s Fleetwood Mac with the more famous mid-‘70s ideation more than any other album the “early” Mac made.

The bulk of the album is made up of loving, accurate, and effective Buddy Holly homages; blurting, honking teen malt-shop spinners; slurring Eddie Cochran dry-hump whompers; greasy and romantic doo wop; and angsty teen ballads. I especially direct you to “Linda,” a precise Holly replicant that makes great use of Mick Fleetwood’s continually rolling toms, and “Here Comes Charlie (with his Dancing Shoes On),” which blends Bo Diddley and Elvis into a snarling stomper that sounds a lot like ‘60s American garage punk, or the more aggro end of British mod. Also, we note that the chiming, arpeggio-laden teen weeper “Teenage Love Affair” isn’t too far away from “Pale Blue Eyes”; in fact, it’s close enough to the Velvets song to make me think Spencer must have been, to some degree, modeling it.

Curiously, there are two other tracks on Jeremy Spencer that completely depart from the loving ‘50s and ‘60s homages. Both of them are downright mean-spirited, though time has eroded the sarcasm behind their creation, and just left us with recordings that could pass for genuine artifacts of the era.

“Mean Blues” is a truly savage parody of the over-amplified, ham-fisted loud and unsubtle electric blues prevalent in the late 1960s: A lot of amplification, seemingly meaningless, moronic back-and-forth note selection, and unnecessary finger vibrato (all accompanied by weird grunts, howls). It is precisely the opposite of the kind of engaged, emotional blues Green, Spencer, and Kirwan played. The terribly funny thing is that time has obscured the element of parody, and if you didn’t know this track was a joke, you might think this was an early exercise in proto-noise, proto-punk, overdriven blues. (It vaguely feels like a precursor to Pussy Galore or even White Stripes.)

“Take A Look Around Mrs. Brown” is another derisive parody that time has largely removed the sarcasm from, leaving us with an tasty knees-up anthemic, proto-glitter psychedelic rock song. It seems to be deeply influenced by late Small Faces (drummer Fleetwood is clearly imitating Kenny Jones) and early Traffic, with other asides to Mystery Tour-era Beatles and Satanic Majesties-era Stones. Oddly, although the song was intended as a diss of pretentious, “meaningful” psychedelic rock, it ends up sounding like some amazing collaboration between Oasis and Sham 69.

The wonderful Jeremy Spencer is not just for Fleetwood Mac fans. In fact, most of them are likely to be very baffled by this dip into the American radio rock of the pre-Beatles era. But if you are a fan of the Greaser/slicked-back D.A.-end of Glitter, the ‘50s spirit at the heart of pub rock and early punk, and especially 1960s West Coast boogie (Groovies, Commander Cody, even Beefheart), you will very much dig Jeremy Spencer.