American rock 'n' roll was around long before the Beatles. 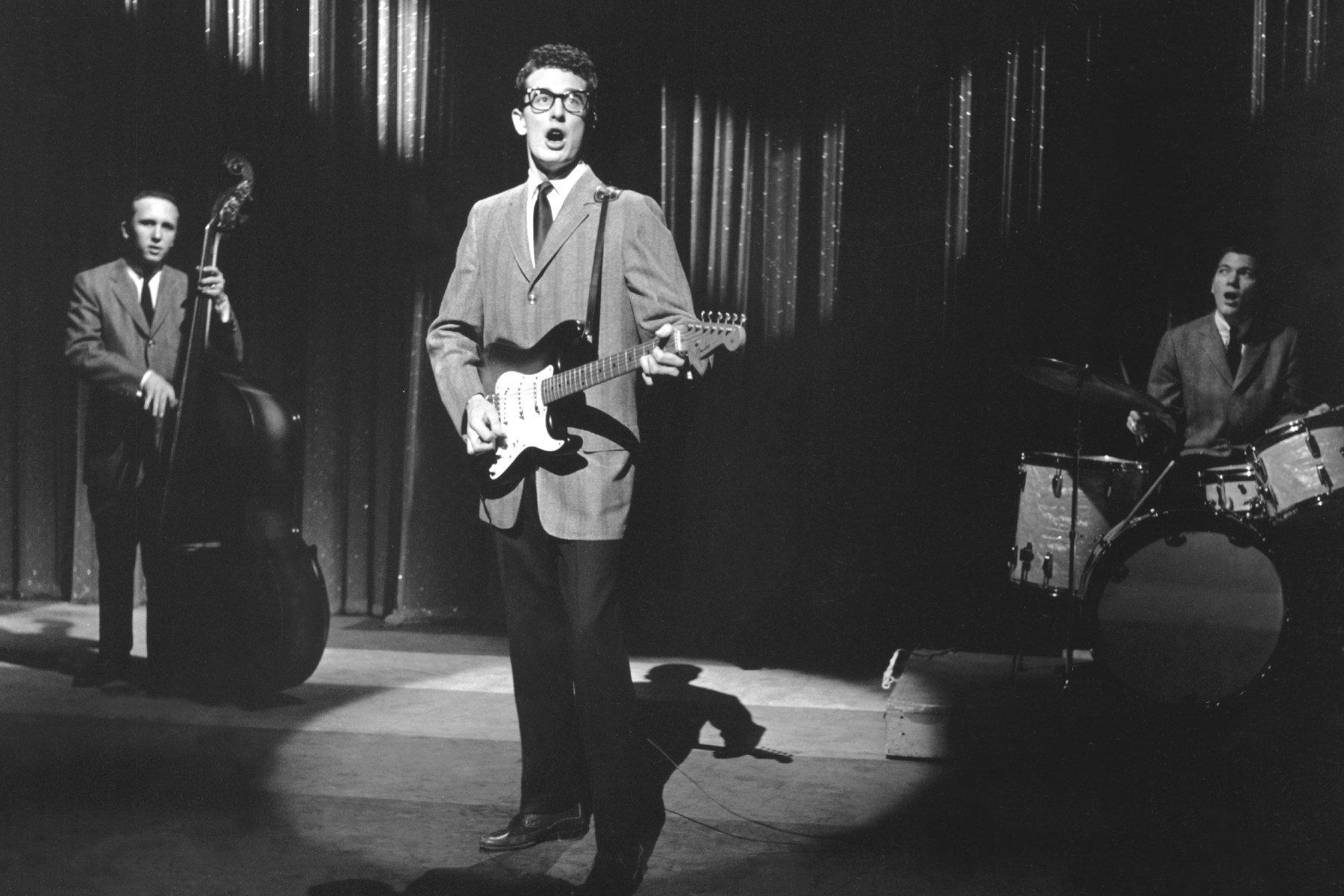 See, there’s been a furious reaction to my recent piece about the Beatles and how their massive success and ubiquity snuffed out the natural evolutionary path of American Rock’n’roll. This response revealed a pile of interesting things, but most notably this: A lot of people out there still subscribe to the “Day The Music Died” myth.

The legend goes like this: In the mid-ish 1950s, Rock’n’roll was healthy and all the hep cats were happy (heppy?). The natives sipped their malts and danced in their swing dresses and saddle shoes, and they all looked like Bowzer or Brando or Brian Setzer or Betty Page or Olivia Newton-John. The Hop was Hoppin’ and all was right with the world! But then, oh, dark clouds formed over Teen Eden: Elvis went into the army, Chuck Berry and Jerry Lee Lewis were sidelined by scandal, Little Richard found God, Buddy Holly and Eddie Cochran died, and woe unto the world, there was nothing left for the wee little kiddies throughout the land except for Annette Funicello, Bobby Vinton, and Neil Sedaka! But then in February of 1964, the four heroic mop-tops stepped off that BOAC plane and shook their bangs and their tushies and went Yeah Yeah Yeah and ROCK’N’ROLL WAS SAVED!!!!

Lots of people — smart ones, too — still subscribe to this silly story. But The Day the Music Died (Until The Fabs Saved Us) theory is not only completely false, it’s also damaging: It greatly diminishes the vitality of the American Rock’n’roll landscape prior to the arrival of the Beatles, it creates a false narrative of an important part of our cultural legacy, and it’s a little bit racist.

There was so very much going on in American Rock’n’roll between 1958 (when Elvis entered the army) and 1964 (when the Beatles performed on Ed Sullivan) that one hardly knows where to start.

So many icebergs, so many tips (and I will only touch on a few): In April of 1963 in Portland, Oregon, two different bands – The Kingsmen and Paul Revere & the Raiders – recorded the greasy, neanderthal stomp that was “Louie Louie” (the Kingsmen’s 45 hit the market first, so their rendition is better known). Both renderings fairly closely resembled a version of the song that was cut two years earlier by Rockin’ Robin Roberts and The Wailers, out of Tacoma (and that was a cover, the original being an equally slimy doo-wop tango released by Richard Berry in 1957).

Listen, there are whole books on “Louie Louie” (in fact, one of ‘em is the only halfway decent thing Springsteen’s in-house hack Dave Marsh ever wrote), but it’s worth noting this legendary song because the Kingsmen, the Raiders, and the Wailers are fairly emblematic of a certain kind of band that could be found all over America in the early 1960s, before Beatledom: Ultra-primitive, honking, stomping and wheezing garage rock bands, making a racket based on a knuckle-grazing simplification of Eddie Cochran, the more ludicrous and frantic side of doo wop, and the pummeling, shuffling rock’n’boogie coming out of New Orleans. Whether it’s the famous Trashmen or local wonders like Rochester’s Tempests, these bands played an agitated, sled-careening-over-asphalt three-chord thrash virtually identical to the purest forms of punk rock that was to emerge a decade and a half later.

If we trace back the roots of the Class of ’60 Garage Rockers, we find another utterly vibrant American music scene. The clearest antecedent for the flaying and flailing of the pre-Beatles garage rockers was the double and quadruple timed rockin’ boogie coming out of New Orleans in the late 1950s. This is, perhaps, best typified by Huey Piano Smith, Lee Dorsey, Jessie Hill, Chris Kenner, Ernie K Doe, and many others. Anyone who thinks rock was dead circa 1960 needs to have New Orleans boogie shoved down their throat, and then they should be forced to lick dried ketchup off of a Billy Corgan’s gigantic, hate-filled Jupiter-like head. Now, there’s likely a subtle (and not so subtle) racism implied by the fact that this ecstatic, rollicking noise was a-hollerin’ and a-honkin straight outta Orleans Parish at exactly the time all these wags will tell you rock was dead; what, this stuff doesn’t count?

Without even looking elsewhere, between New Orleans and the caveman rockers of the Northwest you have enough evidence to throw this abhorrent Day the Music Died myth into the toilet where it belongs, and that’s before we even mention the more aggressive and hysterical end of doo-wop – acts like the Olympics and the Rivingtons — who also impacted the garage t(h)rash of the pre-Beatles era.

Now, lets add to that the folk explosion that was simultaneously detonating all over America: See, folk wasn’t just a lot of people cooing Kumbay-freaking-ah; it was also a lot of witty and angry young men and women bashing three chords on acoustic guitars, in absolute defiance of the prevalent myth that everything was all Paul Anka and Bobby Vee. Young American music circa 1963 wasn’t just healthy, it was positively exploding. Day the music died, my ass.

Study it a little bit, and you’ll also see how these developments were the result of a natural evolution that had been churning for a century or more. And if you listen to and think about this stuff, if you lay it all out on a figurative table and then lay it out on a literal table, you can also imagine the amazing place it would have gone to.

I think a Beatles-less American rock story would have led to a flowering of a Beatnik Rock’n’Roll (thanks to reader Brook Ellingwood for inspiring the track of this idea), i.e. a more virile and artistically varied folk-rock that would have likely emerged from the morphing of the garage idioms with the folk music that was prevalent in the late 1950s and early 1960s. There were certainly extant bands that hinted at this progressive, aggressive, avante folk – the Fugs, occasionally the Lovin Spoonful, the more electric work of Richard and Mimi Farina – and it likely reaches it’s fruition in two acts: Captain Beefheart and the Velvet Underground. But I posit that if American electric beat music had been able to pursue an evolutionary course undisturbed by the music hall coyness and clever frippery of Beatle-ism, Beefheart and the Velvets would have been in the center of the action, as opposed to being on the fringes.

Likewise, if we imagine a world where the big-beat amphetamine raunch-roar of The Sonics or the Wailers was able to slither into the mainstream without being pushed to the fringes by Beatleism, we encounter the very real possibility that the Stooges – or something damn close to it – could have ended up being centrist, as opposed to an extreme.

See, everything would have been better.

Now, all of this is a relatively incomplete picture – tip of the iceberg an’ all that – but I wanted to assert two things: To say that American Rock’n’roll in the late 1950s and early 1960s had become corny, flaccid, and watered down is ludicrous, inaccurate, and racist. America wasn’t some pale, suffering maiden, awaiting rescue from mop-tops: It was doing just fine, and even the most casual perusal of New Orleans rock’n’boogie, Northwestern proto-punk, the passion and energy of the folk scene, or any of the cranked-up garage bands trying to re-write doo-wop via Eddie Cochran and doing an awful/fantastic job of it, proves otherwise. Secondly, the potentialities for what would have evolved from the diverse, insane, salty, and spicy mofongo of American music that existed exactly at the moment before Beatle-ism emerged is just, well, incredible.

And that’s even before we consider the freaking Beach Boys, who, lest we forget, had released “Little Deuce Coup,” “409,” and “In My Room” before 1963 had even ended.