Is the Bass Drop Finally Dead?

The dubstep sound of Skrillex and Diplo permeated clubs in the early 2010s. What happened? 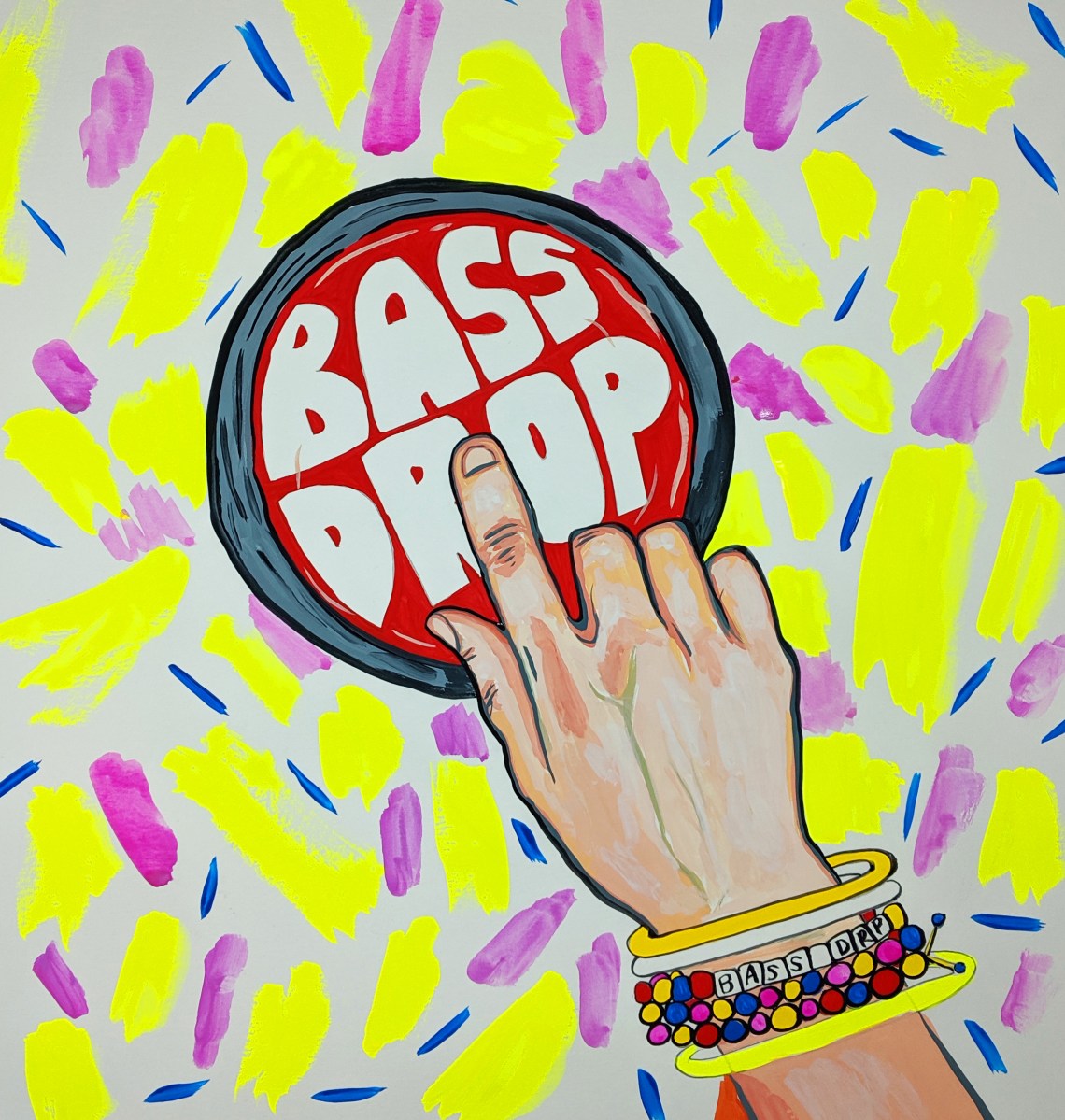 Ten years feels like a century ago in these hyper-fast times, but circa 2009, it felt like EDM was the music that was going to take over the world. The soundtrack responsible for the music festival’s unprecedented boom and a thousand MDMA-filled nights, it was as if millennials had found their rock and roll: a sound that their elders didn’t get, for which they could pack into stadiums hoping to experience something. They wanted to dance and possibly do drugs and try to get laid. Most of all, they just wanted to be there: present, accounted for and armed with the blurry smartphone videos to prove it.

In a few short years, EDM had grown from younger sibling of the ‘90s underground rave scene to something, well, massive.

Things, however, change. While DJs like Steve Aoki and Diplo can still get command crowds of sweaty people decked out in neon necklaces dancing by the thousands, the bass, it seems, has finally dropped — both metaphorically and literally.

Ah, the bass drop. Producers like Skrillex, Excision and Flux Pavilion made sure it was in every one of their songs, and from there, the bass drop became the defining feature of contemporary electronic dance music. Even if you’ve never experienced EDM live (or, more accurately, its subgenre of dubstep), you know it. It’s fast for a few minutes, then it’s quiet for a moment until, all of a sudden, a sonic avalanche hurls throughout the room: BWAAAHHH BAAHH BAAHH WUB WUB WUB BEHHHH!!!

Nostalgia for the bass drop has already set in. You’ll find Redittors out there reminiscing on UKF or wondering whether dubstep still bears relevance, along with articles asking if it’s straight-up dead, coming to the conclusion that no, it isn’t. Rather, dubstep has just fallen out of fashion, they say.

A major part of this subgenre’s legacy is that it showed later producers the seismic, thrilling power of the “drop,” as it’s called in shorthand. Drops permeate the songs, commercials and other media we come across on a daily basis, yet we don’t pay much attention to them because they get at catharsis the same way over and over again — the redundant build-up/release format — and we’ve all grown used to that. This lack of interest on our part speaks to the current phase of drops, though it’s worth examining the deeper connection that they have to music history at large.

Producer Chuck Sutton sums up the drop as “an intensified chorus section.” He tells InsideHook that “the intro, the bridge, the build-up all cater to this part of the song — this is why you came here to listen to this song.”

It’s supposed to “make someone’s headphones, speakers or subwoofer vibrate quite immensely,” says Morgan Evans, who runs the YouTube channel Bass Boost Everything. The channel’s most viewed video, with over 34 million, deafens even before you click on it, titled in all-caps “BIGGEST BASS DROP EVER! (EXTREME BASS TEST!!!).” Its syntax reflects the drop’s connotations of silly machismo; it’s not a coincidence that drops are brief, euphoric climaxes that interrupt periods of tension and denouement.

For the archetypal drop, try Skrillex’s 2010 classic “Scary Monsters And Nice Sprites.” It starts with a plush, minor-keyed synth melody as the energy builds up, then cuts to an audio sample (“YES, OH MY GOD!”). The drop abruptly follows in a nasty barrage of wub-wubbing.

Ever since “Scary Monsters,” just about every EDM hit has incorporated this musical device in some manner, but over the years, the drop has gotten considerably softer. At present they’re so soft as to sound almost non-existent; compare Skrillex to a smash hit like The Chainsmokers/Halsey song “Closer,” from 2016 — the drops on this song sound more like tepid meows.

While listeners like Evans define the drop by its overwhelming intensity, this quality wasn’t present at the roots of dubstep, which grew out of the experimental reggae of Jamaican producers like King Tubby and Lee “Scratch” Perry in the 1970s and ’80s. Over the next few decades, their “dub” music became the obsession of the UK’s underground club scene and gave rise to dubstep, conceived during the early aughts in Croydon, South London. The type of structure that grew prevalent among British dubstep producers — a build-up in volume towards a gritty, severe payoff — was perhaps an antidote to South London’s dreary working-class conditions. “There’s a reason it all came from Croydon,” dubstep progenitor Loefah said in Noisey’s oral history on the subgenre. “Croydon was just an incestuous town, with people just working, drinking, thieving, and getting fucked.”

When it emigrated and got into the hands of Skrillex in Los Angeles, the style broke on a global scale, making “Scary Monsters” the drop heard ‘round the world. It also marked the birth of “brostep,” which is dubstep’s Americanized, more aggressive form. It appealed to various breeds of adrenalized males, from current frat bros to former ones trying to salvage the glory of their undergrad years, partying it up at some second-rate Electric Zoo-type festival in Vegas or Miami. For them, the drop embodied nothing more than getting fuuucked uuup.

Consumer brands picked up on all this hype, like when Nestlé had a dubstep soundtrack created especially for an outlandish Wonka Nerds commercial in 2012, the subgenre’s peak year. But mainstream attention faded over the next five or six years, as did the intensity of the bass drop. “A few years ago I remember I would only be uploading more heavy drop-based tracks [to Bass Boost Everything], since that was the trend at the time,” says Evans. As that trend has shifted, he’s instead been focused on putting “more chilled drop tracks” on the channel.

Sutton thinks the drop got softer due to growing accessibility to production software and more people learning how to make electronic music. As nascent producers soon discovered how easy it was to create an epic brostep drop, that quality became cliché. The comedic Soundcloud account Best Drops Ever, for example, made fun of brostep-type aggression in a viral playlist from 2014, in which they replaced drops with samples of Filet-O-Fish ads and Nickelback.

To show how the “epic” mentality turned cliché, Sutton uses the analogy of kids who can’t get enough of sugar. “Maybe this Life Saver is sweet, but this Baby Bottle Bop has condensed sugar and I want this, and — oh wow! — [now] there’s a milkshake that they put sprinkles and cherries on top of, and I want that. Once you grow up, sugar’s nice, but you want it in moderation. There’s other flavors out there and textures you want to experience. I think that’s what has been happening with electronic music. Everyone got excited with [the drop] because it was this in-your-face, aggressive new thing, and after a minute, everyone built up a tolerance to that.”

The musical device got softer in response to the higher “tolerance.” Listeners grew tired of all its maximalism and severity, and with nowhere to go beyond that, producers could only take the drop in the opposite emotional direction. With that, the sound transcended dubstep and climbed all the way up the Hot 100, where it was rendered palatable on hits like “Closer” or Taylor Swift’s “Trouble.” In addition to establishing a presence on the pop charts, it was turned into a marketing tool for commercials. The drop aligns with a product on-screen and, as a result, imbues it with excitement, while sounding far less intense than that bonkers Wonka commercial. In advertisements for GoPro adventures, nouveau Bel Air mansions and expensive spring break getaways for college kids, delightful, glamorous bass drops imply consumerist bliss in the depicted products and experiences — quite the opposite of what came out of Croydon’s underground scene.

However, with where the drop is headed, it might not be an effective marketing tool for long. While EDM parties and festivals still exude the same amped-up energy as the late aughts, they’re not the primary outlet for drops. In its current soft phase, the device is emblematic of the solitary listening experience of playlist culture. “Chill” music like lofi hip hop radio, which is basically muzak for productivity, has spread the notion that all popular music has to sound relaxing so it can offset the stress of working on the job, and it seems that producers have internalized this notion to some degree. If brostep was still fist-pumping up in the club five or so years ago, it has now entered the workforce; the dissipation of the drop shows that brostep has matured.

On the other hand, this dissipation could bring EDM back closer to dub music’s original penchant: one that celebrated holistic experimentation, upping the appeal for songs that are varied, nuanced and freeform. Sutton points out how the drop has “kind of boiled back down to a chorus. I think electronic music is playing with choruses more than drops now.”

The drop will live on as one of the decade’s most notorious pop cultural relics, but at least it managed to do away with a fair amount of that obnoxious, bro-y aggression before its demise. And even if it didn’t, the “Bass Cannon” was bound to run out of ammo eventually.