Through magic of pitch manipulation, that famous baritone voice turned into high-pitched cute for Marvel's sequel to 'Guardians of the Galaxy.'

Vin Diesel is back voicing Groot in 'Guardians of the Galaxy Vol. 2' (Marvel)
By Ethan Sacks

He is still Groot.

For the first Guardians of the Galaxy in 2014, Marvel enlisted Vin Diesel to lend his trademark baritone voice to the lumbering tree-like alien, Groot. But at the end of that movie, the hero was reduced to a mere twig after saving his friends from a violent explosion. In Guardians of the Galaxy Vol. 2, opening Friday, it’s a high-pitched Baby Groot is stealing most of the scenes.

Fans of the franchise may be shocked to learn that Diesel is still voicing the character, delivering his lines in an entirely different register.

“I had to work on a different voice for [this film], which is fun, because people associate me with this deep voice and it’s shocking to people when they hear baby Groot,” Diesel told RealClearLife. 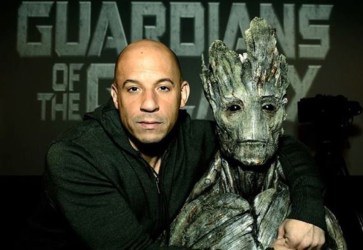 Vin Diesel’s voice was a lot more recognizable as the adult Groot in the first ‘Guardians of the Galaxy’. (Marvel)

Well, he had some technical help. The sound engineers pitched Diesel’s gravelly voice up by 7 to 9 semitones, as they had him deliver the lines slowly to avoid any time stretching issues that would affect the compression. Each take required a different pitch amount to add the proper nuance.

For the look, the Marvel visual development team honed in on a cute, smooth look that was sculpted into a 10-inch maquette that was used on the set as a stand-in for the final CGI version.

That actually made it challenging to show Baby Groot in the same frame as its 6-foot-3 co-stars, Dave Bautista and Chris Pratt, according to  visual effects supervisor Chris Townsend.

“We used a lot of special camera rigging to bring the camera down to a low enough height to be able to see Groot or look over his shoulder up at these towering humans,” Townsend said in a statement.

Because of those scale issues, a lot of work was put in by the CGI animators to make Groot move realistically, and not look like a piece of rubber. And Diesel put work into his vocal delivery to make the character seem that much more…human.

“In the first one, I think of Groot as having just graduated high school and going off to college,” said Diesel. “And this Groot is a toddler. So, I tackled it by looking at my kids a lot, channeling my kids. And bringing this kind of gleeful innocence.”

Rooftop Tents Are Suddenly Cool. You Still Shouldn't Buy One.
A Lesser-Known Mexican Spirit, Sotol, Is Fast Becoming a Texas Sensation
First Drive: The 2022 BMW X3 M40i Proves the M Division Is Inescapable
The 50 Best Valentine’s Day Gifts for Her
It Was Impossible to Tell Whether Meat Loaf Was for Real