Why Inclusion of Women in Film Is Working, Even If Hollywood System Isn’t

Box office and quality is higher for female-directed films, so why not more opportunities?

It’s been several years of scandals and protests, hashtags and calls for change. And after all of the repercussions of the #metoo movement, the prime question right now is: Are women in Hollywood better off, or worse off?

And the answer is — Yes.

Because the more you look at it, the more complicated — and contradictory — the issue is.

Certainly, although there have been demands for inclusion — calls some producers and stars are turning into action, by committing to hire more female filmmakers — the statistics on gender equity remain pretty dismal.

Recently, in “Renegade Women in Film and Television,” writer Elizabeth Weitzman crunched the numbers.  She examined over a decade of box-office hits, the Top 100 earners for every year from 2007 through 2017.

Eleven hundred films. And of those, how many were directed by women?

The other 1057 movies, just slightly more than 96 percent of all the big, multi-million dollar money makers released over 11 years,  had men behind the cameras.

So, that’s the bad news.

The good news is that, in some ways, these days women potentially have more power than men.

And the really infuriating news is that men refuse to see it. Or maybe they do see it, and they’re scared.

If you really look at the numbers — I mean, all the numbers — you’ll see there’s no one-size-fits-all stereotype. Talented female filmmakers are making a wide variety of movies. Female-led movies are drawing diverse audiences and making huge amounts of money, for everyone.

And while we’ll always have sex symbols and comic books, this isn’t all starlet- and superhero-driven, either. Look at this year’s big, serious acting awards, and you’ll see not only hugely competitive female categories, but ones where older performers dominate.

But since this still seems hard for some people to grasp, or admit, let’s take the stats one by one.

For example, the usual faux-compassionate, stealth-condescension explanation for why more female filmmakers aren’t behind Hollywood hits is that they simply aren’t interested in making those kinds of broad-appeal movies — generally big, bold action films.

The conventional wisdom is that they want to make small, handcrafted, personal pictures about relationships, not blockbusters about shootouts and superheroes. That’s the argument, anyway. Male directors, you see, have that big-box vision. Female directors are boutiquey. Guy filmmakers are Amazon. Gal filmmakers are Etsy.

Except, once you examine it, that argument falls apart almost immediately, and on a couple of different levels. 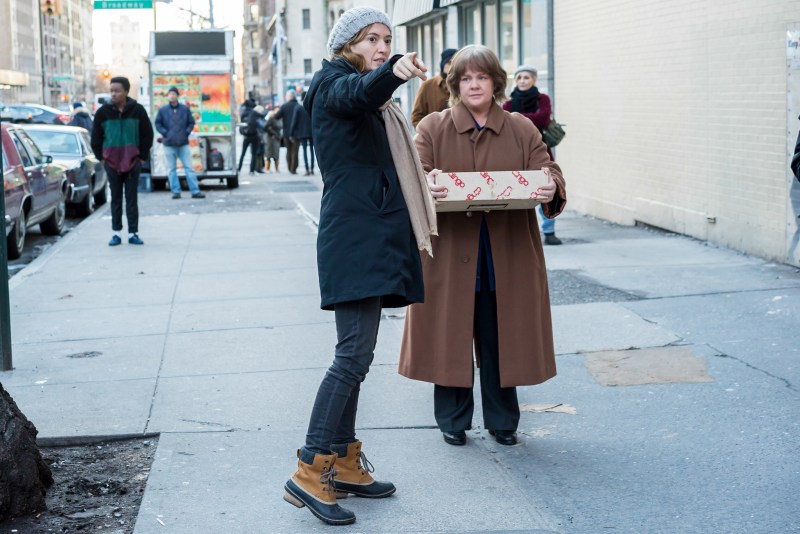 First, the charge that every female filmmaker would rather do a tender, talky relationship movie than a gritty violent drama is easily dismissed by anyone who’s actually seen a lot of last year’s movies.

Did you catch Karyn Kusama’s Destroyer, a slam-bang action picture with Nicole Kidman as a burnt-out cop pursuing a vicious gang?

Or Lynn Ramsey’s You Were Never Here, with Joaquin Phoenix executing child traffickers with a ball-peen hammer?

Actually, you probably didn’t. All those films quickly disappeared after their 2018 releases. Which raises an important question: Do female filmmakers get the same helpful publicity push as ones who can count on the old-bro network of male critics and fanboy sites?

That’s hard to say, but what’s obvious from films like these — or Patty Jenkins’ superheroic Wonder Woman or Kathryn Bigelow’s searing Detroit or even Ava DuVernay’s sci-fi fantasy A Wrinkle in Time — is that women haven’t boxed themselves into a single, sensitive genre.

They make all kinds of movies.

And they would make even more if they had the opportunity. Give them a chance at the same kind of pop-culture scripts the men routinely get offered, and you’ll get hits just as big. Maybe bigger.

What’s more, whenever given that chance, female directors tend to cast women — or at least, cast more women than men do. Which actually means even more tickets sold. Forget those buddy-boy action films you grew up on; current data shows that these days, films do better with female leads.

The genre or budget doesn’t even matter, according to a recent study done by the Creative Artists Agency. Sci-fi pictures, horror films, kiddie cartoons, adult dramas — all did better with a strong female character. What’s more, the more empowered those characters were, the more powerful the box office was.

In fact, films that passed “the Bechdel test” — having women on screen who talked to each other about things besides men — did better than films that failed it. And, since 2012, no film that flunked that feminist standard has ever claimed that golden-ticket prize of $1 billion at the box office.

Which brings us, frustratingly, right back where we started.

If female filmmakers are clearly interested in making all kinds of movies – and female-led films definitely make more money — then why are 96% of all top films still being made by men? Why did only 40% of last year’s top-100 successes star women (which was actually a marked improvement from the year before, when it was only 32%)?

Why the resistance to change?

And, by the way, not only do women drive the box office, older women garner the lioness’ share of the prestige, too. Take a look at this year’s ten Oscar nominees for performances by an actress; seven of the honorees are over 40. (Last year, that age group actually had eight out of the 10 spots; the two winners were supporting performer Allison Janney, 58, and star Frances McDormand, 60.)

So why do the men in charge in Hollywood continue to write off more than half the country? (And in the case of older women, an inevitably growing demographic?)

So what else do you need to know before you’ll help them make more movies for everyone?