“Captain Marvel” Is Ready to Battle Skrulls and Trolls

First female-driven Marvel movie is likely to be a smash hit despite sexist campaign to thwart her.

It took 21 chances to save the day, but the fate of the Marvel Universe is finally in the hands of a woman — whether some men can handle it or not.

Captain Marvel, with Oscar-winner Brie Larson playing the titular intergalactic heroine and scourge of the alien race known as the Skrulls,  is joining the boys’ club this Friday as Marvel’s first female-helmed superhero movie. It debuts almost two years after DC’s Wonder Woman hit theaters and raked in $820 million at the end of its run.

The newest Marvel entry is expected to open with about $125 million in opening ticket sales, which should make it one of the biggest box office hits of the year. And many women who love Carol Danvers (as she’s known out of costume) from the comic books have waited along time to buy those tickets.

Women and Hollywood founder and publisher Melissa Silverstein has been anticipating the movie for some time, as its source material intrigued her.

“I love Wonder Woman, but she was an Amazonian princess,” she said. “In some ways this was her calling. Carol Danvers was made, not born into this.” 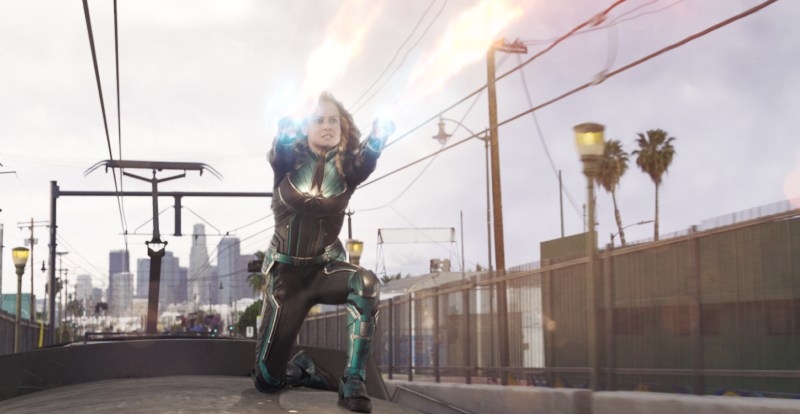 But before it even hit theaters, the character is already fighting adversaries here on Earth. Captain Marvel faced a large amount of backlash in the form of negative user comments on movie review aggregation site Rotten Tomatoes, apparently from a male-dominated contingent who seem to prefer men in uniform when it comes to superhero movies.

A few days after the review bombings, Rotten Tomatoes announced on Feb. 25 that it would be making significant changes, from disabling the comments before the premiere of a movie to hiding the “Want to See” score until after its debut so it would not be confused with an “Audience Score.”

While the company did not confirm whether this was in response to the movie, it did start a cultural conversation about the character and her influence. The site closed down comments a few days later.

“Unfortunately, we have seen an uptick in non-constructive input, sometimes bordering on trolling, which we believe is a disservice to our general readership.” the site wrote in a released statement. “We have decided that turning off this feature for now is the best course of action. Once a movie is released, audiences can leave a user rating and comments as they always have.”

Paul Dergarabedian, chief analyst at Comscore, said he was puzzled by why Rotten Tomatoes even allowed user ratings before the premiere of a movie to begin with.

“To have an audience score before a movie is released to the public, it skews the whole idea of what it’s about,” he told RealClearLife.

“If there’s a new restaurant, and I say, ‘That’s gonna suck,’ and give it a 10 percent but haven’t even eaten there, then that’s just my opinion. It’s not necessarily adding something constructive. I think it’s common sense that you have to make sure these are valid comments coming from people who’ve actually seen the movie.”

This isn’t the first time a female-driven movie has seen significant backlash from men before its premiere, Dergarabedian said. Other movies, such as Ghostbusters and Star Wars: The Last Jedi saw similarly vicious levels of review bombing.

“Change is not something that’s linear,” she said. “People will push against it, and we will always have these sorts of negative reactions to these new ideas. These things just disturb the status quo, and people are protective about what can be done to these properties they love.

“But it’s a movie, chill out,” she said. “You can still love the original Ghostbusters and see the new one. People are stubborn about thinking in terms of certain stories being owned by a certain gender.”

But this movie means a lot to a lot of people — including many women comic book readers and Marvel movie fans.

Carol Danvers originally debuted in the Marvel comics world in 1968, initially as just your average officer in the U.S. Air Force, who eventually gained her interstellar superpowers when her DNA infused with a Kree superhero, Mar-Vell.

For years, Danvers was shuffled between different storylines and iterations and renamed a few times, until her comics story got a soft reboot in July 2012. That comics storyline gave her a different haircut, a better costume and a revamped origin story that influenced the big-screen version.

She essentially becomes the female equivalent of Superman, who will likely be saving the guys in Avengers: End Game later this spring.

Marvel writer Kelly Thompson has been a key part of forming Danvers’ new comics storyline. She said she was drawn to Danvers’ story because of the character’s flaws and that her personality — sassy and tough — has aged well throughout the decades.

“Carol is, like so many of us, a screw up,” Thompson said. “But what makes her inspirational — and aspirational — is her ability to get back up. Sometimes less to be a hero and more to spite you, and I think that especially is relatable for most people. A lot of us are in touch with that feeling!”

So the trolls are probably out of luck, because there will probably be a Captain Marvel 2.

Dergarabedian said the review bombing likely wouldn’t have an effect on “Captain Marvel”’s box office performance — it could even help it.

“It can get a conversation started about a movie with detractors and defenders,” he said. “All that just raises awareness of the movie in general. People are going to be curious to see it and make a judgment call on it even more. And that is the most important thing.

“Marvel isn’t gonna be hurt by the negativity. Awareness was already off the charts, but even smaller movies could become a social media sensation because of this.”