“No One Is Safe”: Hunting the Libyan Hit Squads of the 1980s

The CIA suspected at least 10 murders around the world were related assassinations.

Libyan chief of state Muammar al-Qaddafi attends a 1981 graduation at the women's military academy in Tripoli. The academy opened in 1979 during Qaddafi's push to include women in Libya's armed forces. (Photo by Christine Spengler/Sygma/Sygma via Getty Images)
Sygma via Getty Images
By Lee Ferran

First Mohammad Ramadan was shot and killed in April.

Then Abd al-Jalal Aref was gunned down in Rome eight days later.

Umran al-Mahdawi, a former diplomat, was in Bonn, Germany when he was gunned down in early May.

In all, there were at least 10 murders over just a three-month period in 1980 – all the work, the CIA suspected, of professional and semi-professional Libyan hit squads working for dictator Muammar Qaddafi.

“We have reason to doubt that Libya’s Qadhafi has ordered a halt to the ongoing series of assassinations of Libyan dissidents living abroad,” a now-declassified CIA memo, with the bland title “Libyan Assassination Teams: Some Patterns,” says, using an alternate spelling for the late Libyan strongman. “While Western Europe has been a major arena for these incidents, we believe that Libyans living in the U.S. will also be targeted, in part as proof that no one is safe from Qadhafi’s vengeance.”

At the time relations between the U.S. and Libya had reached a nadir. The year before the U.S. added Libya to its list of state sponsors of terrorism, and after reports of the assassination squads surfaced, then-President Ronald Reagan ordered the U.S. embassy in Tripoli closed. In 1986, Reagan would dub Qaddafi the “mad dog of the Middle East.” 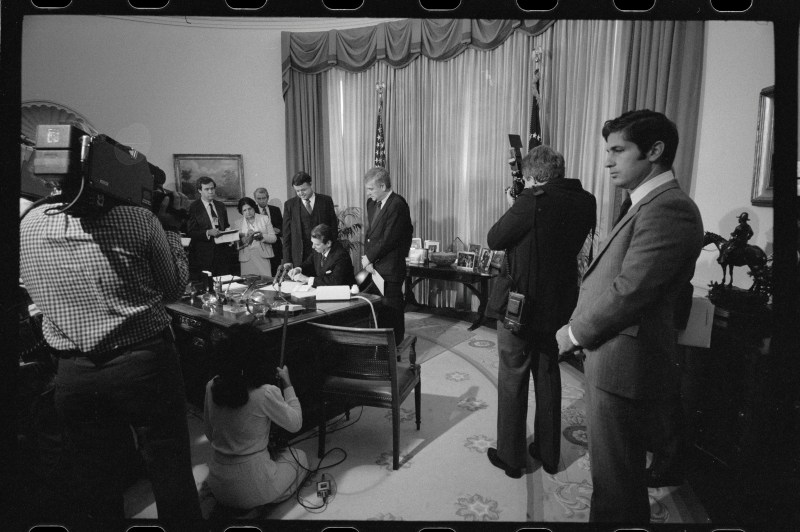 A Secret Service agent stands guard during a signing ceremony in the Oval Office 12/4 as part of an extra security measure because of reports that Libya has sent an assassination team to the U.S. Agents GETTY IMAGES
Bettmann Archive

But in 1980, other killers were off the leash, both professionals and amateurs, according to the Agency.

“Preliminary analysis of the European murders suggests that there are two types of Libyan hit teams operating against dissident targets,” the memo says. “In the majority of killings, it appears that professional assassins (presumably belonging to the Libyan Intelligence Service) have been the perpetrators. In several cases, however, the killings appear to have been the work of amateurs, possibly students or others with little formal training in covert warfare. The fact that two of the victims were killed by strangulation and decapitation suggests amateurs rather than professional killers.”

The CIA said the killers usually worked in two-man teams, with the support of local Libyans working at for the Libyan embassy – known as the Peoples’ Bureau. The locals would act as the “spotters” before the hit, assist with the logistics after the killers came in the country and then helped them escape again.

“In addition to whatever weapons the Peoples’ Bureau here already possesses, the Libyan government would not hesitate to use the diplomatic pouch to bring in more,” the memo says.

The CIA said that the fact that Libya had “Peoples’ Bureaus” abroad, rather than normal embassies, helped provide cover for the killers.

“The whole concept of the ‘Peoples’ Bureaus’ has caused an inordinate amount of difficulty for governments worldwide in trying to define the exact status of diplomats. At times the Libyans claim to have diplomatic immunity; at others… they have claimed to be in a non-diplomatic status and therefore not capable of being PNGed [diplomatically kicked out of the country]. Libyan assassins are probably capitalizing on this confusion and traveling on Peoples Bureau passports,” the memo says.

In 1981 the assassination campaign appeared to take a dramatic turn when the media reported that a Libyan hit squad had been sent to the U.S. to kill Reagan himself. But after weeks of sensational headlines, during which the White House took extra security precautions, nothing came of the threat, which was later speculated to be a hoax.

But for another American, the threat was very real. In October 1981, a “corporate recruiter” met with Libyan exile Faisal Zagallai. Six months before the FBI had reportedly warned Zagallai he was one of 24 students on a hit list because of his opposition to Qaddafi.

So Zagallai took a gun to meet the corporate recruiter, but it didn’t stop the other man from shooting him in the head twice. Somehow he survived.

“There is little doubt that the orders came from Tripoli,” The New York Times reported later. “Four days after the shooting, Jana, the official Libyan press agency, said that Libya’s World Revolutionary Committee had acted against Mr. Zagallai.”

By the end of 1981 Qaddafi halted what another CIA file says was the “first phase” of the assassination plots. In all, 11 Libyan dissidents had been killed.

Then, in 1985, five more attacks targeted dissidents again, in Greece, West Germany, Cyprus, Italy and Austria. Qaddafi also tried twice to kill dissidents in Egypt, but both times his killers were intercepted by Egyptian security, the CIA said.

Libya would remain on the U.S. State Sponsor of Terrorism list until 2007 when, after a rapprochement with America, the country was removed. The U.S. State Department said then that Qaddafi was “out of the terrorism business.”

But Qaddafi would meet a violent end four years later as a result of a popular uprising during the Arab Spring — murdered by his own people.

His last words were said to be a plea of sorts: “What did I do to you?”

Review: The New Jack Daniel’s Release Comes With an Actual Warning
Is Kendall Roy Dead?
How a Nepali Climber Shattered the Record for Summiting the World’s 14 Tallest Mountains
Italian Pot Roast Is the Bolognese Alternative You Need in Your Life
What I Wish I Knew Before I Bought a Chevy K5 Blazer
Why Do I Feel So Weird About Dave Grohl, Who Isn’t Jewish, Doing Annual “Hanukkah Sessions”?

The Galápagos Remain One of the Wildest Vacations on Earth
The Best Rare, Hard-to-Find Gifts on eBay
What I Wish I Knew Before I Bought a Chevy K5 Blazer
Why Sparkling Red Wine Should Be Your Drink of Choice This Holiday Season
Week 13's Top Storylines: Mike Zimmer, Big Ben and the Return of Minshew
The Latest Designation in Mental Health Conversations? "Adult Children."
What Jeff Garlin's "Vanity Fair" Interview Got Right About Cancel Culture
Breitling’s Newest Timepiece Collection Is a Love Letter to Aviation
The Holy Grail of Watches Now Comes in Tiffany Blue

Why Do I Feel So Weird About Dave Grohl, Who Isn’t Jewish, Doing Annual “Hanukkah Sessions”?
The Cola-Flavored Beer From Goose Island Is Surprisingly Great
The 100+ Best Gifts for the Women in Your Life
Scientists Record Footage of Massive, Mysterious Jellyfish
Neil Patrick Harris on the Art of Magical Holiday Gifting