The Starriest Hotel in LA Reopens After a $2.5 Billion Overhaul

No stranger to the limelight, Fairmont Century Plaza is ready for its second act

Hailed as “The Hotel of the Future” when it opened in 1966, the Century Plaza reigned as a Los Angeles landmark for over four decades. Now, thanks to a $2.5 billion redesign, the mid-century icon has returned.

In 50 years, Century City was transformed from a studio backlot to a second downtown Los Angeles of sorts. The stomping ground of movie stars, power-lunching producers, and executives, its ties to the film industry go way back: Cowboy actor Tom Mix originally owned the (as was then) rolling ranch land, later selling it to the Fox Studio Corporation in 1925 with 20th Century Fox still headquartered there today.

“We like to joke that the hotel is Cleopatra’s baby,” explains Philip Barnes, Regional Vice President, Southern California and General Manager, Fairmont Century Plaza. “Following a string of expensive movie flops, culminating in the box office disaster Cleopatra, 20th Century Fox was forced to sell off some of the land, paving the way for Century City and now Fairmont Century Plaza, which sits at the center of it all.”

Located on Avenue of the Stars and designed by prominent Japanese-American architect Minoru Yamasaki (best known for designing the World Trade Center towers) for Aluminum Company of America (ALCOA), its elegantly curved, 16-story façade makes the Century Plaza the neighborhood’s shimmering showpiece. Featuring cutting-edge technology for the time – central air, electric blankets, ice machines, and color televisions a decade before they landed in most homes – it was fervently styled “The Hotel of the Future,” and the Hollywood set soon followed.

Bob Hope emceed the opening gala, and, on the evening of August 13, 1969, President Nixon hosted the Apollo 11 astronauts and their wives for the “Dinner of the Century” in celebration of a successful moon landing. There were peace rallies and political fundraisers. Reagan loved it so much the hotel was often called the “Western White House,” and celebrities flocked there for star-studded parties, galas, and awards shows, including the 12th Annual Grammy’s in 1970 when Johnny Cash won Best Country Vocal Performance. Sonny & Cher had a nightly residency there in the 1970s, Elton John performed a private show in 1978, and Cream was inducted to the Rock & Roll Hall of Fame at the hotel in 1993 by ZZ Top.

After a glittering half-century building its legacy as a Los Angeles landmark, on March 1, 2016 the Century Plaza closed to begin a long-planned $2.5 billion overhaul. While the redesign ultimately proceeded with respect to its history, there was a public outcry when word of a proposed total demolition went public in 2009. Considered a master of the New Formalism movement, the hotel stood as a tribute to Yamasaki’s lauded architectural style and hundreds of phone calls were made, letters written, and 1,300 pledges made to the Los Angeles Conservancy advocating for its preservation.

“It was always designed to be the centerpiece of Century City, but the hotel became an emblem for the neighborhood,” explains Adrian Scott Fine, the Senior Director of Advocacy at the Los Angeles Conservancy. “We had lost some significant examples of 1960s architecture across Los Angeles so when the Century Plaza became threatened with potential demolition it really resonated with people.”

Diane Keaton spoke out passionately in favor of saving the place, and thanks to a motion filed by City Councilmember Paul Koretz in 2009, the hotel was designated as a Los Angeles Historic-Cultural Monument in 2013. The LA Conservancy also spent years working alongside developers attending weekly meetings to approve a final win-win plan for the historic building and new mixed-use development. “It’s a place many people have fond memories of and connections to and I think it will continue to stand as the centerpiece of Century City — with the reopening, I absolutely think its legacy will endure,” says Fine.

An impressive percentage of significant historic and character defining features were kept intact during the five-year overhaul, including the building’s distinctive curved form and individual balconies. Room numbers were decreased from 726 to 400 but reconfigured to larger and more luxurious footprints. Delivering a modern update to 1960s nostalgia, international design firm Yabu Pushelberg created polished but residential style interiors, including Fairmont Gold, a boutique style hotel-within-a-hotel concept that features 71 guest rooms and suites on the 10th and 11th floors. Plus, some rather cool sounding possibly Rat Pack-era inspired extras.

“As far as we know this hotel within a hotel concept does not exist in the luxury LA market,” says Barnes. “We carefully thought through the guest experience, and when it came to Fairmont Gold’s on-demand martini cart, it was simple. Pre-dinner drinks while getting ready for a night out? It was a natural fit.”

In keeping with its former star-studded credentials, A-listers looking to arrive or depart the hotel incognito will appreciate the Fairmont Gold Lounge private hotel entrance (decked out in marble and bronze, it oozes grandeur and luxury) for custom check-ins and check-outs. Stays can also be tailored with The Gold Life and assignation of a dedicated personal assistant to each Fairmont Gold guest, offering a bespoke concierge service – should they be between PAs, of course.

When the hotel opened in 1966, Century Plaza doormen wore Beefeater costumes; today it’s more sharply tailored suits. There’s now a spa, complete with a hammam and Himalayan salt room, plus a swanky rooftop swimming pool for cocktails and people watching.  Signature restaurant Lumiere is a chic take on the traditional French brasserie, while the lobby bar is the sort of backdrop Vogue cover shots are made of.

It’s here, Barnes shares in another fun insider nod, that the Century Plaza drinks list pays homage to the hotel’s musical history. “CJ Catalano, who oversees our beverage programming, has crafted an entire menu identity based on the musical history of the hotel — not just from the ’60s but across the decades,” he says, adding that a personal favorite photo from the archives is one of Keith Moon, drummer for the Who, out on the balcony from his guest room. “My team recently recreated the image with me standing-in.”

An exciting time for such a well-loved landmark to make its return. While the hotel settles down to usher in this glamorous new age for Angelenos, looking ahead, Barnes shares that the Los Angeles Ballroom (the largest on the west side) will host the Critic’s Choice Awards (January 9), and Producers Guild Awards (February 26), bringing a taste of more glittering events to come. “What sets us apart is not the beautifully reimagined hotel itself, but our team and people that bring this hotel to life. Just as it was when it opened to worldwide acclaim in 1966, Fairmont Century Plaza will once again be the Los Angeles hotel.”

In the meantime, sit back and listen to the Fairmont Century Plaza sounds from afar, thanks to its toe-tappingly good Spotify Playlists. 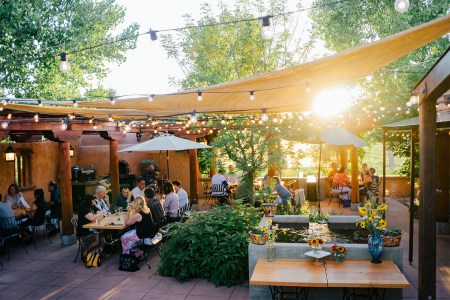 Albuquerque Is the Next Great Foodie Destination