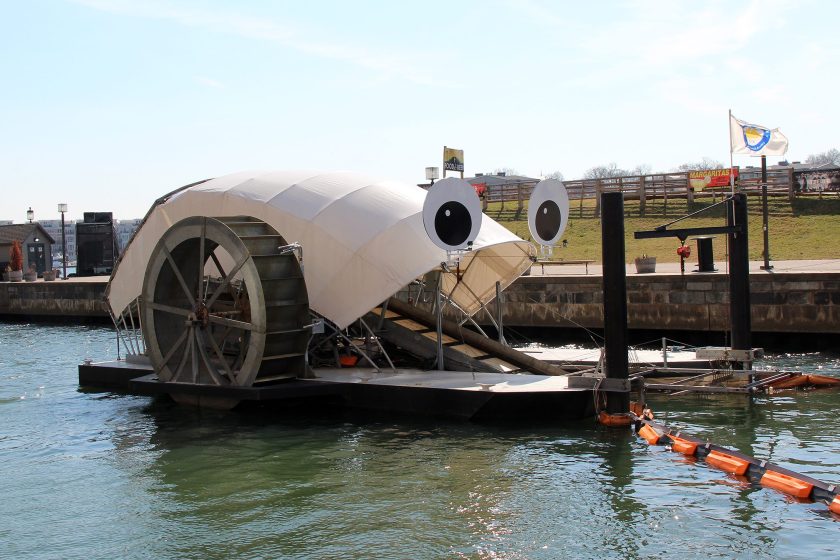 Baltimore Harbor was so polluted, a beast began hunting in its waters.

That googly-eyed monster is the Inner Harbor Water Wheel, a solar- and hydro-powered trash collector floating on the water’s surface.

Since the floating device was installed in May 2014, it has collected over a million pounds of garbage and debris, according to the Waterfront Partnership of Baltimore. It’s part of the partnership’s initiative to make Baltimore Habor swimmable and fishable by 2020.

With a string of buoys to funnel the trash flowing down the Jones Falls River towards the Inner Harbor Water Wheel, a conveyor scoops up the detritus and collects it in a dumpster.

“Mr. Trash Wheel” has been so successful that it’s being considered for numerous cities around the world. National Geographic reports Panama City, Rio de Janeiro, and Lombok, Indonesia are all possibilities. The trash collector is also being optioned for American cities, such as Atlanta, Honolulu, Milwaukee, and Denver.

See “Mr. Trash Wheel,” as it’s affectionately known, in action below or check out its livestream.

A Reporter’s Notebook: Words and Images from Inside the Ukrainian Conflict
Big Wave Surfer Kai Lenny Explains the Joy of Risking His Life at Nazaré
The Strange Religious Afterlife of “Groundhog Day”
11 Women’s Bag Brands Every Guy Should Know
Adam Pally on Pandemic Comedy, Miami and Why It’s Always Better Working With Friends
A Winter Weekend Guide to Woodstock, Vermont
The Smashing Pumpkins Belong in the Rock and Roll Hall of Fame
The 6 Best New Restaurants in DC
5 Things This Miami Chef Learned in 6 Months at Noma