NIH Director Anthony Fauci, who has fought the pandemic for three decades, on what's next. 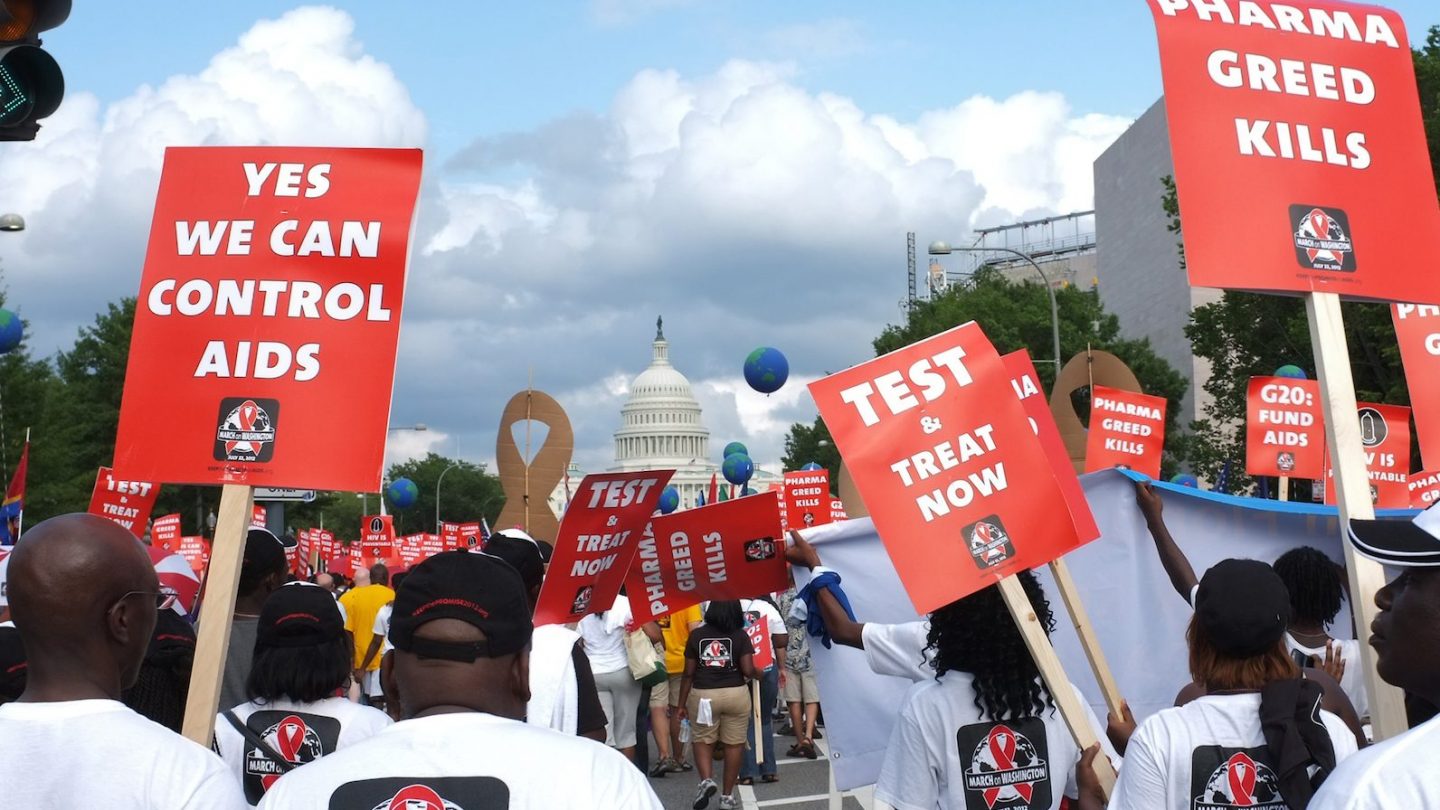 Recently the theater world was devastated when the composer and lyricist Michael Friedman, whose works include the Tony-nominated Bloody Bloody Andrew Jackson, died from HIV complications at just 41. I had the privilege of co-writing four shows with him. Nothing about his loss made sense to me, including his cause of death.

I had come to regard HIV as obviously serious, but no longer particularly life threatening for people fortunate enough to have health care. Mentions of the virus made me think of Magic Johnson, who announced he had the virus 26 years ago. To say he’s survived would be a gross understatement: now 58, he’s thrived from both a physical and financial standpoint. (His net worth is estimated at $500 million.)

With that in mind, I reached out to someone who has engaged the virus from its initial discovery.

Dr. Anthony S. Fauci has been the Director of the National Institute of Allergy and Infectious Diseases since 1984. He has been studying and combatting HIV for over three decades. He said there is reason today for incredible optimism: “There have been scientific advances that have given us the tools that, if we implement them properly and aggressively, theoretically we could end the epidemic both domestically and globally.”

For reasons that have little to do with science, however, this hasn’t happened yet.

To begin, we’ll focus on the progress. “The first [HIV] drug was approved by the FDA in 1987,” Fauci said. AZT “helped a bit but soon the virus developed a resistance.” As a result, “we gradually got into combinations of therapies that started in 1996.” Today, we’ve reached the point that treatment isn’t just effective but “very user friendly.” While a combination of three drugs is required, many patients can get “all three drugs in one pill taken once a day.”

How effective is this therapy? Assuming people are diagnosed in a timely fashion—say, within six months or before too much damage has been done to the immune system—and take the pills as instructed, it’s possible to “bring the level of virus down below detectable levels.” (The prognosis becomes even more promising when coupled with “a healthy life: exercise, good diet, appropriate rest, you’ll do better whether you’re HIV infected or not.”) Indeed, the therapy can actually make it ”virtually impossible for that person to transmit the virus to an uninfected sexual partner.”

There’s even more good news. We now have the option of “pre-exposure prophylaxis,” also called PrEP. If people who do not have HIV but are at high risk for it, get PrEP and “take it as directed,” it’s possible to “decrease by well over 95 percent the likelihood that you’re going to get infected.”

HIV drugs, whether PrEP or otherwise, do have a downside: “Any drug, particularly powerful drugs that are going to be used against viruses, will certainly have toxic side effects.” However, Fauci noted “the ones that we have now are much better than the ones we had 10 or 15 years ago.” Patients may experience “some kidney toxicity, some GI upset” (or whatever negative impact is caused by a particular drug). Medications can be adjusted to minimize discomfort. Above all, Fauci said it’s vital to keep in mind the underlying truth: “Toxic side effects pale in comparison to the effect of the virus.”

It all adds up to an extremely promising picture: “Theoretically, if you can get everybody on therapy and keep them on therapy, you can decrease by well over 90 percent all of the new infections in the United States.”

Yet we “still have between 35 and 40 plus thousand new infections each year in the United States.” (It goes without saying these infections can be fatal: for 2014, the CDC attributed 6,721 deaths directly to HIV in the United States alone. Since the epidemic began, there have been an estimated 35 million HIV deaths worldwide.)

But the challenges go beyond people getting tested and faithfully following their course of treatment. Take South Africa. Fauci estimated this nation suffered 300,000 deaths because of the response of President Thabo Mbeki, Nelson Mandela’s successor who held the office from 1999 to 2008. Fauci particularly singled out Mbeki’s health minister, Dr. Tshabalala-Msimang: “She was as weird as anybody can be, being a physician herself and not believing HIV caused AIDS.” (Indeed, she was nicknamed “Dr. Beetroot” and “Dr. Garlic” for her belief eating those foods might prove a cure.)

While South Africa has “markedly improved,” there are plenty of other places providing political obstacles. Fauci cited Uganda outlawing homosexuality, since people who are at risk will avoid getting tested or seeking treatment. (After all, it might cause them to face punishment for their “crime.”)

Sometimes even success can present potential roadblocks. Dr. Fauci found himself a YouTube sensation over his response to a question from Louisiana’s U.S. Senator Bill Cassidy: “He was asking what would conceivably be a reasonable question: ‘You’ve been so successful with HIV, why do we need to keep funding it?’”

(When asked if there was sufficient funding to combat HIV/AIDS, Fauci replied: “Yes and no.” He stated they “have a lot of money that has been put into this both from a research standpoint here at NIH” as well as other programs. He also observed, “Obviously, you never have sufficient funding until you finish the problem.”)

Which brings us all back to Michael Friedman. Why did he die so young and so abruptly?

Everyone who knew Michael will state that he was unique. He had a gift for composing in seemingly every genre of music. Our final show together was Here’s Hoover!: The Historic Herbert Hoover Comeback Special (in which former President Herbert Hoover reveals he never died, but has been waiting for America to fall apart as totally as it did during the Great Depression so he can apply the lessons he learned and at last redeem himself). Since it was modeled on Elvis Presley’s ’68 Comeback Special, Michael drew heavily off the King’s catalog but always in surprising ways, so one tune was rockabilly and the next was a reimagining of the epic sound of Presley’s “If I Can Dream.” He composed with a speed that could be unnerving. Once he informed me he didn’t feel like writing lyrics that day and demanded I produce some immediately. Working on pure adrenaline, I banged out a few verses and a crude chorus in maybe an hour, which he set to music in less time than that.

Michael was a very private person but also one with a dark sense of humor. Accordingly, I suspect he would have seen the irony of being a person who didn’t share his secrets lightly in life, only in death to have the New York Times speculating about how long he may have been infected before he sought medical treatment.

We’ll never know exactly how long he waited and, in many ways, it doesn’t matter. Because it may be that in death, as in life, Michael wasn’t like most people.

“If a person gets infected tomorrow and come to my clinic and I put them on therapy and they take their therapy religiously every single day, that is extremely unusual that a person will have a bad outcome.” Fauci noted there was a chance Michael was an “outlier,” as exist “in all situations that have to do with health and disease and medication.” (While Fauci didn’t have an exact figure and hesitated to “guesstimate” how numerous these outliers might be, he estimated that “well over 95 percent of the people would do extremely well.”)

This is why we need to keep getting checked for HIV. (Here’s one simple method: During your annual physical each year, specifically request they test you for it.) And this is why, as Dr. Fauci said, we need to put our foot on the accelerator. Because the only thing more heartbreaking than a death like Michael’s would be failing to prevent more like it.

Here’s one of Michael’s songs from Bloody Bloody Andrew Jackson: “Illness as a Metaphor.”

Below, this is Michael (seated) and I going home after a long day of rehearsal, as captured by stage manager Michelle Heller across the subway platform. Here we demonstrate that sometimes the key to collaboration is knowing when to shut up.