Decoding PTSD With a Retired Army Major Who Has It

RealClearLife talks with author Marc Raciti about post-traumatic stress disorder and his treatment.

This might be difficult to fathom for some, but there’s a world out there where a Chris Cornell or Chester Bennington suicide happens 10-times as often.

Sadly, that place exists, and it’s within the ranks of the U.S. military.

A study released last August by the U.S. Department of Veterans Affairs found that former soldiers have been committing suicide at a staggering rate of 22 per day. And 18 pages into his book, I Just Want to See Trees: A Journey Through PTSD, retired Army Major Marc Raciti finds himself on the verge of becoming yet another statistic.

It’s 2007, and we find ourselves alongside him on a rainy, dreary day in Hawaii. Raciti’s standing on a tree branch 10 feet above the ground, a noose looped around his neck. “In a few more seconds it would all be over … no more guilt, sadness, despair, or self-loathing,” he writes of his final thoughts. Then he jumps.

Luckily, it’s just one of a number of twisted nightmares the decorated war veteran has had throughout the years, but as the 53-year-old Raciti tells RealClearLife, it might as well have been the real thing. He had, in fact, nodded off against a tree that he’d driven past to and from work daily, and dreamed of hanging himself from. That day, he even had a noose in his pocket at the ready, but couldn’t go through with his sinister plan.

What drove Major Raciti to the edge? A second, equally insidious epidemic: post-traumatic stress disorder (PTSD), a mental condition that affects countless others like him.

According to the National Institute of Mental Health, PTSD “is a disorder that develops in some people who have experienced a shocking, scary, or dangerous event.” Furthermore, the VA notes that people with PTSD make up anywhere from 11 to 20 percent of veterans of Operations Iraqi Freedom and Enduring Freedom. Marc’s second wife, Sonja, an Air Force veteran and clinical psychologist who specializes in PTSD, puts it this way: When we experience a trauma, it’s difficult for our brains to process it, so it leads to symptoms like sleeplessness and difficulty functioning in day-to-day life. Normally, those symptoms “dim” after a few weeks, and the person returns to his or her normal activities. “With PTSD, that dimming and returning back to normal doesn’t happen,” she explains. “Your brain is unable to process all the different things that happened.”

Also, PTSD doesn’t affect every person the same way. Some suffer from it immediately, while others have a delayed response and onset, with symptoms manifesting after lying dormant for years after the initial trauma. Recurring symptoms can include intense, waking nightmares; fits of explosive rage; and suicidal thoughts. 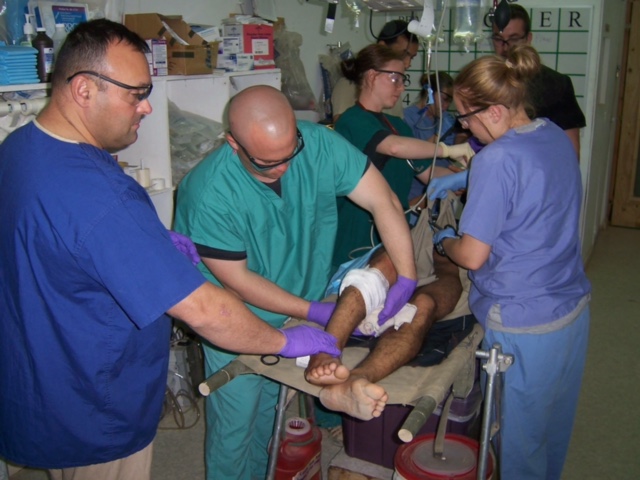 Raciti (at far left) treating an Iraqi policeman during trauma. Assisting him are medics from the 2-27th Infantry unit.(Courtesy of Marc Raciti)

But what sets the PTSD suffered by military veterans apart from, say, a victim of a shark attack is the very nature of what they do for a living. “With military [and] first-line responders, their mind is highly trained to do the mission first. So oftentimes, you have that delayed onset,” explains Sonja.

Marc Raciti was 25 when he first enlisted in the U.S. Army in 1989, right about the time when Operation Just Cause took place. He tells RealClearLife that he simply had his sights set on a career as a soldier: His father worked for the Air Force and he’d grown up around military bases, so it seemed like the right thing to do. Making his way through basic training and advanced individual training, he was soon deployed to Operation Desert Storm, where he was assigned to the lab at 47th Field Hospital in Bahrain. There, he’d get his first taste of what it was like to be around those caring for the sick and wounded. “I saw how great these providers were and the amazing work they did, and I fell in love with medicine. I couldn’t think of anything more honorable than serving those who served,” Raciti remembers.

So in the late ’90s, he set out to become a physician’s assistant, garnering degrees from the University of Texas Health Science Center in San Antonio and the University of Nebraska Medical Center. He then landed a fellowship in orthopedics at Womack Army Medical Center at Fort Bragg near Fayetteville, North Carolina, in 2001. Raciti tells us that his education was particularly hands-on, with shifts done at on-base primary care centers and courses taken in emergency medicine and combat trauma. “Once I got deployed, you’d be surprised how quickly and well you’re able to access that information in a situation where you’re taking on casualties, and that muscle-memory kicks in pretty fast,” says Raciti.

But he’s quick to note that not all PAs can stomach the work that he excelled at. “I was able to compartmentalize it, focus, and surprised [myself] at how incredibly calm I was through a lot of these trauma situations.” (That harks back to what Sonja was saying about a soldier’s ability to block out his or her personal trauma in favor of the mission at hand.)

After that initial deployment in Iraq, Raciti writes in his book that he first started noticing changes in his behavior, and had anger issues at home. By the aughts, a second and third tour would materialize—Kosovo in 2000, then Iraq in 2003—which saw Raciti’s then-undiagnosed PTSD symptoms worsen. He was becoming angrier, as he pulled away from his loved ones. (He would end up divorcing his first wife, with whom he has two daughters.) One side effect of PTSD was the intense guilt he felt about being spared, while others were badly injured or killed in action. This would be a recurring post-nightmare symptom, says his wife Sonja, with Marc waking up, screaming, with the “eyes” of the people he’d cared for “on him.” And of course, his symptoms worsened because of the territory, too. For example, while on a convoy from Kuwait to Iraq in 2003, Raciti had stopped to attend to a soldier complaining of back pain, and was immediately thrust into a firefight. With bullets whizzing past him, Raciti returned fire on an old, Vietnam-era M-16 the soldiers he’d been tasked to protect had given him. (Raciti does note that military PAs do carry sidearms, but only for self-defense purposes.) “PAs and medical personnel [are] not designed to fight; we’re designed to take care of the fighters,” he says. 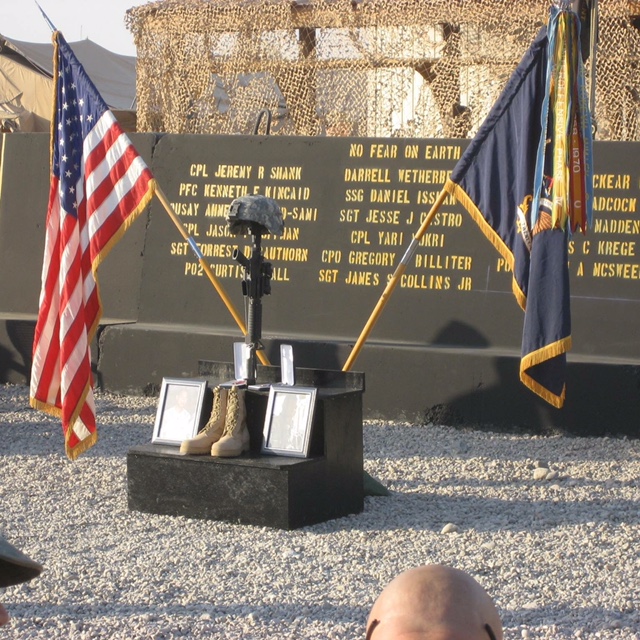 A memorial for 18 fallen soldiers at FOB McHenry in 2007. Raciti was stationed in Hawija, Iraq, a particularly violent area at the time. (Courtesy of Marc Raciti)

It would be right before a fourth tour, a trip back to Iraq in 2007 when he reached that nadir in Hawaii. He attempted to seek treatment through the military, but the doctor who saw him at the Soldiers Assistance Center (SAC) was less than helpful and left Raciti with a bad taste in his mouth. He saw his re-deployment as a type of “passive suicide,” or when you thrust yourself into a dangerous situation and hope to get killed. The way he thought about it was, “Now I get to go try Iraq and let somebody else do the job.” And as he explains, it couldn’t have been a more convenient scenario, as he’d been assigned to a tiny outpost, Forward Operating Base McHenry, near Hawijah, one of the most violent areas in Iraq at the time.

One story Raciti told RealClearLife, which is not in the book and he says he’s never told any other journalist, happened while in Hawija. “We had some casualties coming in, [and] they weren’t American; they were Iraqi,” Raciti remembers. “And one of them was a small kid.” He continues: “That was so incredibly difficult for me, because I had a son about that same age, and to put this little guy in an adult-sized body bag was devastating. I just remember it was … it was so sad that this little guy got shot up like that,” he says. “I wondered if anybody else in the world would mourn this little guy, because he was put in harm’s way by his own family. So that [led] me to believe that no one really cared.”

As tragic as his story may be, Raciti’s is also a story of redemption—and most importantly, recovery. 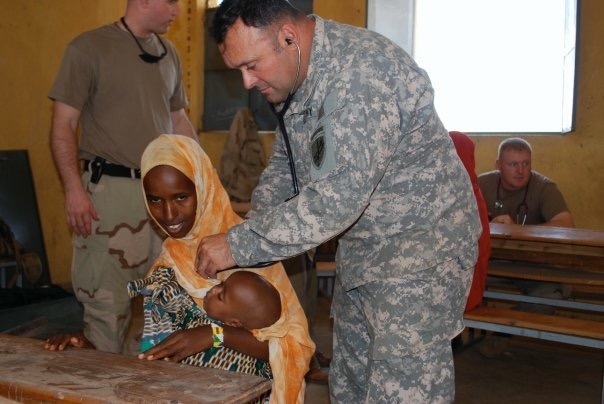 In 2008, five years before he retired from the army, he was sent to Africa in support of the special forces. And though much of what he did was classified, he did engage in humanitarian work in countries like Kenya and Ethiopia. He’s fluent in five languages, so his French came in handy. While in Africa, he also managed to summit Mount Kilimanjaro, on which he unfurled an American flag in honor of the fallen. 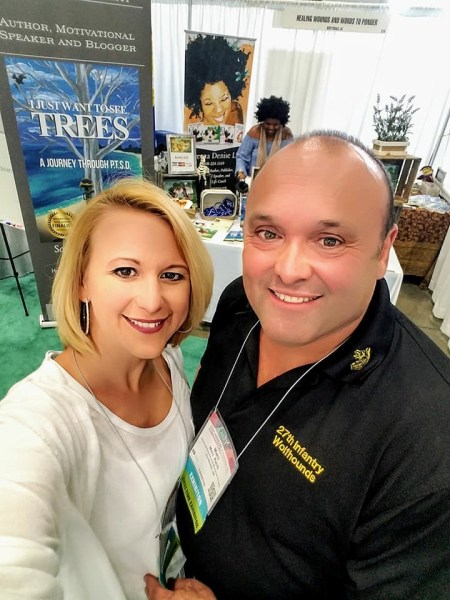 Raciti remarried in 2012, and has Sonja to thank for getting him back into treatment. “It’s a disease of avoidance,” says Raciti of his PTSD. “Of course, with the experience I had prior to that, I didn’t have much faith in the treatment and the people who were providing the treatment.” He would eventually enter into a weekly program that was anything but easy—with a doctor who told him upfront that he was a civilian, not a combat veteran, but would be able to see him for 90 minutes per session (twice as much time as is standard). “Every Wednesday I had to relive the trauma that I’d experienced,” says Raciti of his treatment. “Every Wednesday I think I wanted to quit.” The sessions would consist of what is known as Eye Movement Desensitization Reprocessing (EMDR)—or the constant rehashing of traumatic memories to help lessen their effect on the mind. He also adopted a dog, Douglas, who’s become a true friend (he’ll rest his cold nose against Marc’s neck when he’s having nightmares).

The healing process has been difficult—and not without continued treatment and medication—but Raciti is unabashedly self-aware of how courageous his decision to get help was. “‘Vulnerability’ is not a word that soldiers use or like,” he says. “So putting yourself out there like that takes a lot of guts to do … I want people to understand that there is hope, that I’m proof of it, and if I can do it, anybody can. At this point, I have crossed the abyss, and I want to reach in and pull people through.”