How to Get Rid of Man Boobs

"Moobs" can be overcome, but it's not easy

Paul’s obsession with breasts began in junior high. Same here!, you’re thinking, except unlike most teens, the boobs Paul was obsessed with were his own. Growing up in Omaha, he’d always been a chubby kid, but by age 13, the soft mounds on his chest had taken on undeniably breast-like properties — not quite a B or C cup, he says, but cone-shaped and protruding nonetheless. For the next 25 years, he never went swimming with a group of people. He never wore T-shirts, or polos; nothing jersey or remotely fitted. Instead, he bought only shirts with two front pockets, into each of which he’d slide a plastic credit card before leaving the house. “If I had a moment with a girlfriend, it was in the dark, under the sheets,” he says. On numerous occasions, he tried starving himself to no avail—he’d lose the weight, but the boobs remained. Looking back now, he says, “the body shame was overwhelming.”

It wasn’t until Paul was 37 that he booked an appointment with a cosmetic surgeon, wondering if perhaps liposuction might be the answer. “I took off my shirt and right away he said, ‘Oh, I see,’” Paul remembers. “Then he told me stubborn fat wasn’t my problem.” Paul’s breast-like bumps were actual breasts, made of breast tissue, and clinically known as gynecomastia.

Gynecomastia is a condition in which the tissue inside the breast gland grows to create the appearance of female-like breasts. In some cases, it’s caused by a hormonal imbalance — typically, overproduction of estrogen and underproduction of testosterone. It can be genetic or it can be environmental. Certain drugs  (some antibiotics, heart and high-blood-pressure medications, and antipsychotics, as well as steroids and also weed) can send hormones out of whack enough to produce breast tissue. So can a number of health issues, including hypogonadism, cirrhosis, and malnutrition — which is why Paul’s attempts to starve his moobs away only made them worse. 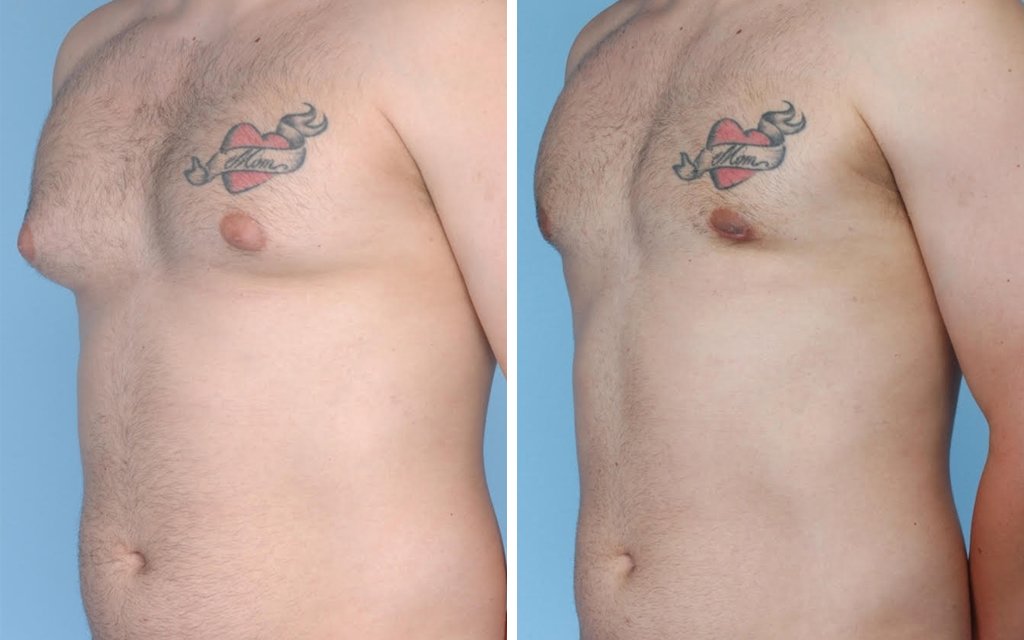 A gynecomastia patient, before and after breast reduction surgery. Photo by Dr. Dan Mills, M.D.

For years, gynecomastia has gone undertreated for a few reasons: For one thing, many guys are too embarrassed to talk about it, even with their PCP. For another, the condition cannot be treated with medication, though it may be alleviated if an underlying cause can be identified and addressed. Sometimes, it goes away on its own. And there’s really no inherent danger in having it, beyond, of course, the resulting emotional distress.

Which, of course, is considerable. And why these days fewer guys are waiting around to see if their breasts will deflate on their own. According to statistics from the American Society for Aesthetic Plastic Surgery, male breast reduction procedures are among the field’s fastest growing, with a nearly 26 percent increase between 2014 and 2015. “Most manboobs are some combination of excess breast tissue with fat around it,” says ASAPS president Dan Mills, M.D., F.A.C.S., whose Laguna Beach, California, plastic surgery practice specializes in male breast reduction surgery. “And you can’t diet breast tissue away.” Most men who come to see him, he says, are generally fit but with pockets of chest fat that just won’t budge. Paul was 37 — 5”10”, 155 pounds with a 32-inch waist —  when he underwent a double mastectomy, followed by a bit of liposuction to remove some of the excess fat. Afterwards, he looked down at his bandaged chest. “For the first time in my adult life, my chest was flat,” he says. “I said Jesus Christ! It was like being set free.”

Breast reduction surgery is pretty straightforward, with the innovation showing up in how certain doctors combine techniques. For guys whose moobs contain a lot of fat, Dr. Mills often calls on a combination of non-invasive fat removal, like CoolSculpting, in concert with surgical removal of some tissue and liposuction of fat. If a guy wants to be “flat as flat can be,” says Mills, he might opt to remove all the breast tissue and the fat, followed by some shaping of the chest area. This can be done either by reinjecting some fat “intrapectorally” or by strategically placing incisions to create scar tissue that acts as a firming mechanism. In most cases, a patient can go back to work in two or three days and back to the gym in a few weeks.

But even Dr. Mills says that surgery shouldn’t be your first step; that for many guys, “Diet and fitness can easily be part of the solution.” Some cases of gynecomastia aren’t clinical, and if it’s just fat under there, not breast tissue, you’ve only got your lazy, Dorito-eating ass to blame. (How to know? Cop a feel. If you’ve got what feels like a golf ball or rubbery, skeet-like mass in the area beneath your nipple, that’s breast tissue. If it’s soft throughout, it’s fat.) Poor posture — too much time sitting hunched over your laptop or phone — can also cause the chest muscles to sag. In these cases, eating well combined with regular cardio and certain pectoral exercises, like kettlebell swings, pullups, and bench presses, will minimize the appearance of moobs if not eliminate them entirely. Some men, like Chris, a Family Nurse Practitioner in the Boston area who says he’s experienced “low-level gynecomastia,” has found that taking certain phytoestrogens, like crushed flaxseeds, has helped in temporarily decreasing the size of his breasts, though he will be going under the knife in the future.

Paul has now been manboob-free for many years, though says he’s still not rid of all the body shame. Still, surgery was one of the most transformative moments of his life. “It’s easy to make fun of, but having breasts, as a man, is so debilitating,” he says. “And most guys suffer in silence.”

Those “Queen’s Gambit” Emmy Speeches Epitomized Exactly What’s Wrong With Hollywood
How a Self-Taught YouTube Martial Artist Became a Marvel Supervillain
Bill Maher Takes on the Met Gala and Charlie Sheen on a New "Real Time"
Sourdough Focaccia Is Truly the Best Focaccia. Here's One Chef's Recipe.
The Ahead-of-Its-Time Toyota FJ Cruiser Is Finally Having Its Moment
Norm Macdonald Was Quite Possibly the Best Talk-Show Guest of All Time

Searching for the Platonic Ideal of the Piña Colada in San Juan, Puerto Rico
The Ahead-of-Its-Time Toyota FJ Cruiser Is Finally Having Its Moment
Did HBO’s “The Jinx” Get Robert Durst Convicted of Murder?
Pretty Much All the Coolest Samsung TVs Are on Sale
Five Jackets You Should Buy During East Dane's Fall Sale
The First Discounts for Apple's New iPads Are Already Here
New Balance's Flash Sale Will Help You Gear Up for Fall
This Outdoor Voices Performance Long-Sleeve Is 25% Off
Get Yourself Some Le Creuset Bakeware at a Premium Discount