Find Your Inner-Zen With the Calm App 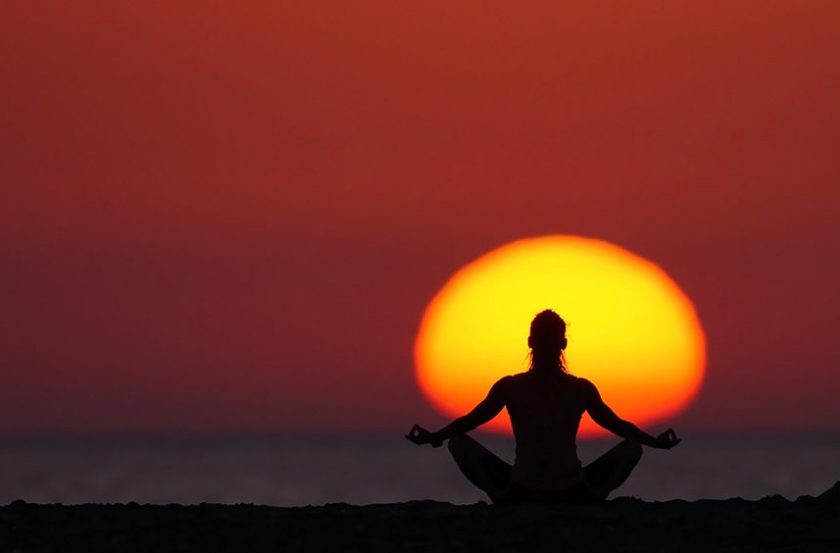 That’s only about a third of actor Ben Stein’s lines in Ferris Bueller’s Day Off, in which he plays the world’s most boring high school economics teacher. The movie happens to be one of Michael Acton Smith’s favorites, and the Silicon Valley entrepreneur had a moment of inspiration when he was brainstorming ideas for his year-old app, Calm, which in part, is armed with “sleep stories,” specifically crafted for adults who have trouble falling asleep. “We were riffing on different ideas and thinking ‘what would make great stories?’ I remembered that scene [in Ferris Bueller’s] where all the kids are falling asleep as [Stein’s] wittering on about economics … and we thought, ‘wouldn’t it be amazing to track down this actor and see if he would read a story for us?’” It didn’t take long for Calm to track down Stein, and he was eager to pitch in. One of Calm’s sleep story entries features his ennui-inducing voice reading a passage from Adam Smith’s The Wealth of Nations. (If you’re wondering whether it actually works, I set up Stein’s sleep story on my nightstand after a long day, and sure enough, I was out like a light in about 10 minutes.)

Whether you’re an assistant, cubicle drone, or executive who finds life to be a constant blur of priorities and anxieties, Calm was made just for you. And it all started with one stressed-out CEO and a much younger test market. For about a decade, Acton Smith headed up a U.K.-based digital entertainment brand called Mind Candy, which scored a mega-hit with Moshi Monsters. The pet monster app had 80 million users; and expanded to the toy market, a hit U.K. magazine, and countless other brand extensions. Though Acton Smith had become highly successful, he tells RealClearLife that it was “very, very intense” and he often struggled to fall asleep at night. Then a friend suggested he explore meditation. “I thought it was for hippies, I thought it was religious; I was quite wary of it,” recounts Acton Smith. After spending some time with it, what tipped the scales for him was the fact that there was actual neuroscience behind meditation. “It wasn’t just woo-woo,” he says. So he dialed back his involvement with Mind Candy and co-founded what is now Calm.

That younger test market he was working with was teens and children—some whom he probably sold on Moshi Monsters. Building on the success that some school districts have found integrating meditation into K-12 curricula, Acton Smith’s company targeted schools with the Calm Classroom Initiative, providing the app free to schools and students around the world. One aspect of the app was sleep stories for kids—and when parents started emailing Acton Smith to tell him that they were falling asleep to the stories, and asking whether Calm could create grownup-themed versions, he knew he had an idea to run with. 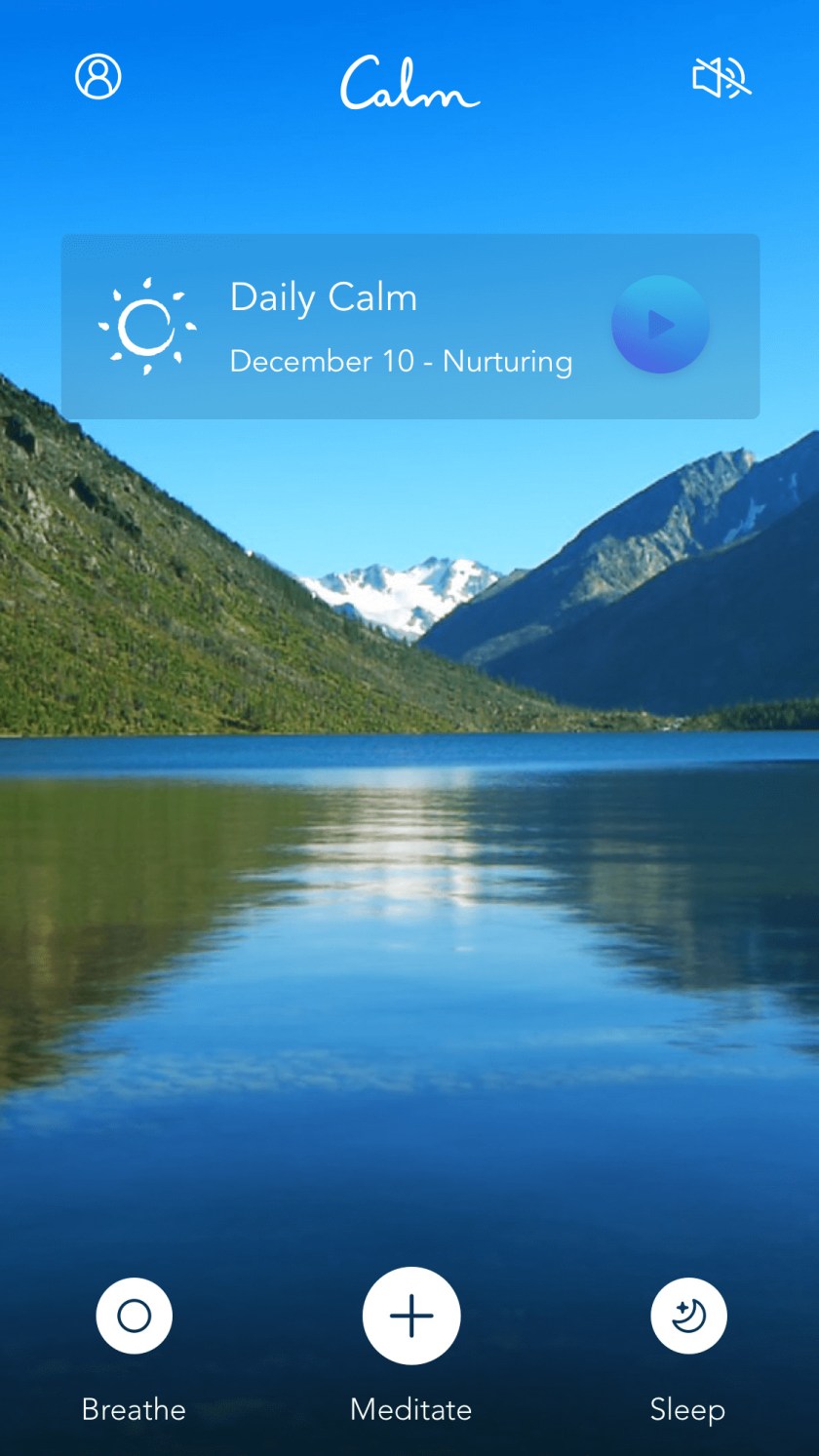 The irony’s not lost on its creator that the sleep stories are launched from a user’s smartphone, a major source of worker anxiety these days. “Mobile devices are not the problem; it’s our relationship with them,” says Acton Smith. “We need to become masters of our devices rather than slaves to them.” The app, which has $1.5 million in angel investments behind it and has been downloaded nearly seven million times, is part of a growing trend in the digital space of meditation-related how-to apps. These include pay-for-plays like Buddhify and the Mindfulness App, and freebies like Headspace and Omvana. According to Acton Smith, Calm is not making any advertising revenue from the app (nor plans to), but rather is selling paywalled content, which runs premium users about $60/year. What they get for the paid subscription is 100-plus additional meditations, guided meditation courses, and soon enough, those sleep stories, which are currently free but will go behind the curtain soon.

So how can you use the app to your benefit? We’d suggest starting out with (and testing) these two functions: the daily calm and sleep stories. The former is a once-daily guided meditation that you can do while sitting at the breakfast table, on the subway/bus (or in the limo), or in your office with the doors closed. (Acton Smith notes that the Calm team gathers every morning at 10 a.m. for the 10-minute daily calm themselves.) You are asked by a voice to close your eyes, bring your awareness forward, and focus on your breathing. (Basically, what one does when he or she begins to meditate.) Near the end of the session, the voice discusses a specific subject: managing stress, calming anxiety, and forgiveness. Plus, you get to pick the background noise: a lake on a crystal-clear day, a crackling fire, or a jungle rainstorm.

But it was the sleep stories we were most interested in as a staff at RealClearLife, and we set out to test them. According to the Centers for Disease Control, between 50-70 million American adults have some sort of sleep disorder; and about nine million use sleeping pills to sidestep counting sheep. So we decided to test out the sleep stories and see if they could help always wired journalists reach slumberville. 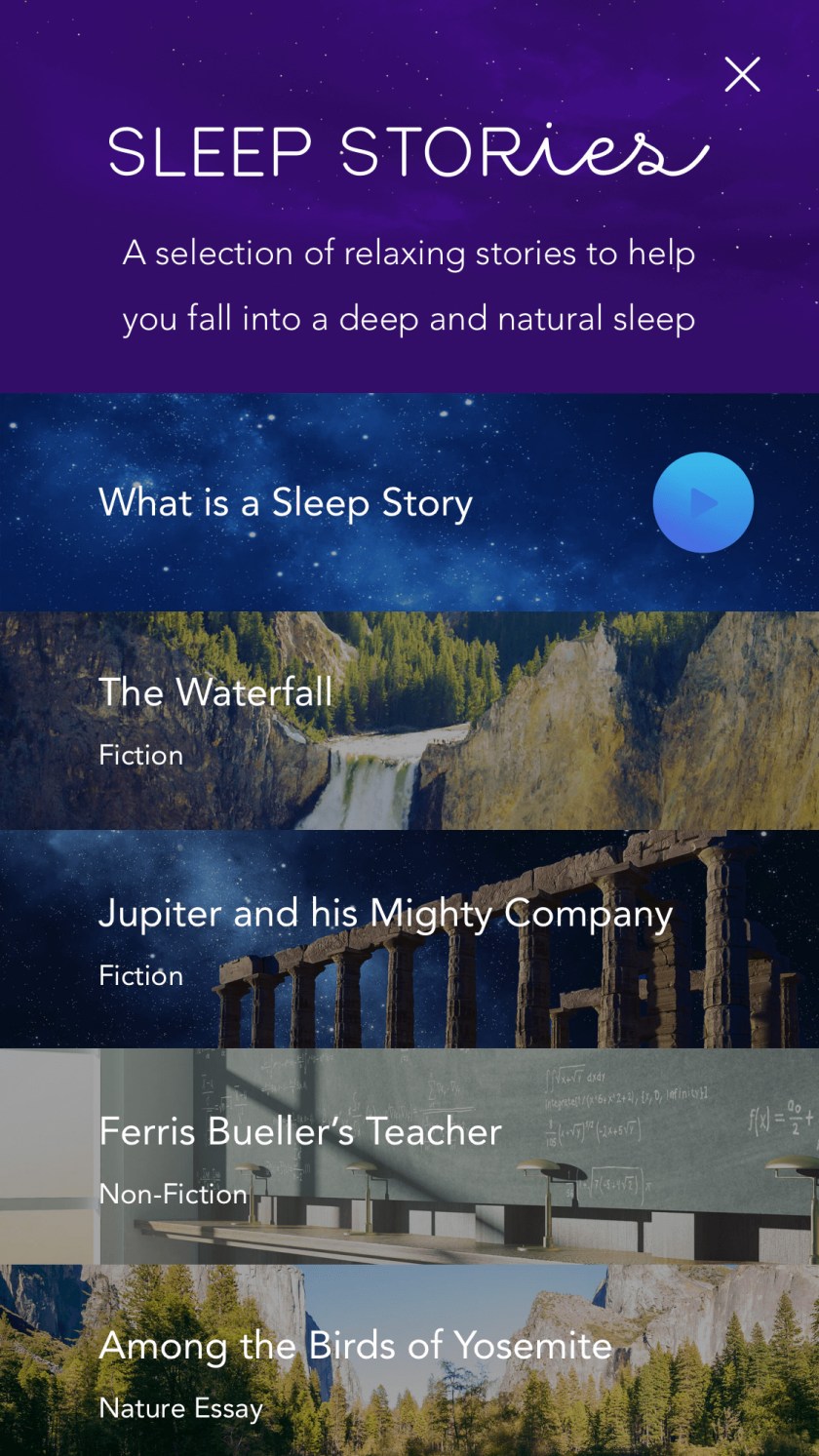 Adrian Lam, RealClearLife‘s managing editor, first used the app on a night when he couldn’t sleep, and the sleep story he chose, the fictional piece The Long Journey, put him right to bed. (He also tried the Bueller story, along with A Midsummer Night’s Dream, Act II Scene I and The Sequoia, with mixed results.) He did note that it was difficult to concentrate on the story as it was playing and that he got distracted by cars honking (after all, he lives in New York City). “I think you’d have to use headphones [to listen to a sleep story], but my concern with that is that I wouldn’t hear my phone alarm in the morning if my earbuds fell out in the middle of the night.” Consequently, Acton Smith notes that the app’s users who do wear headphones “use the app more regularly.” But the sleep stories are a different beast altogether, he agrees. His suggestion would be to use it (obviously) while in bed and with the app playing on your nightstand. The key, says Acton Smith, is that the sleep stories act as a transitioning agent—one that gets us out of deadline- to dead-asleep mode.

On the other hand, although I meditate daily for 20 minutes at 6 a.m., I was unsure what to make of the sleep stories. Like Adrian, I have trouble sleeping, so any help in that department seemed like a gift. The Ben Stein story that knocked me out was actually my second attempt. My first? A sleep story entitled The Waterfall, which put me down for the count—but not as quickly as the Stein story. I remember listening to it, my brain trying to imagine it into a mental picture show—just as you might do while reading a book. Eventually, it conked me out. According to Acton Smith, The Waterfall is the most popular sleep story on the app.

Lastly, I think Adrian brought up the most important point: For those that are not meditation buffs like him, he “… thought that all the [sleep] stories should have started with a breathing exercise or some sort of exercise to get your mind ready for the story.” For example, the sleep story entitled The Ocean’s Lullaby just starts right away. As did the excerpt from A Midsummer Night’s Dream and The Sequoia, reports Adrian. (A number of the stories do begin with the narrator telling you to lie back and get comfortable.) For the non-meditator, it’s not so easy to get in that pre-transition mode. “I found it helpful on the tracks that told you to take deep breaths and imagine that your body was sinking into the bed,” explained Adrian. “It helped me get in the right mindset.”

At the end of the day, what Calm is trying to do here is not altogether groundbreaking but is tremendously important—and something that slips further away from us as we get older and busier. Attempting to rewire the brain and get the body connected to it breathing and sleeping again normally—truly life-affirming actions—is nothing short of a public service. Is Calm the answer to your insomnia or anxiety disorder? No, and we’d be quick to note that that’s where medical professionals or psychologists come into play. But Calm’s doing its part in pitching in, which you sure as hell can’t say that about all the push notifications glutting your smartphone’s home screen right now.

—Will Levith for RealClearLife, with additional reporting by Adrian Lam