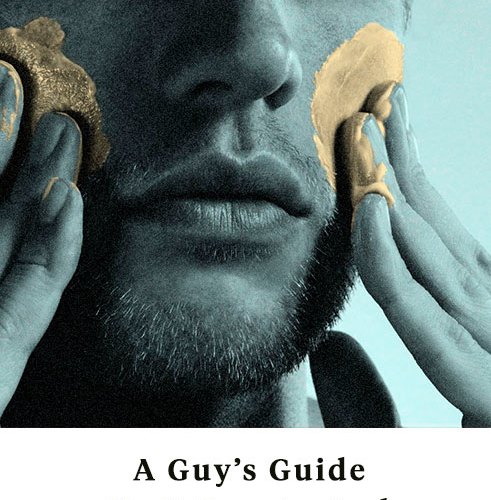 “Do you wash your face?” I whispered to my boyfriend.

He is French and congenitally more open to products and practices that, for most of my life, have been the province of women: éclairs and dishwashing and crepe-making and voluminous, floral-print scarves. Though I have written about women’s beauty for years, my primary exposure to the world of men’s grooming has come from my partners, including a South African boyfriend who would leave for six-week work assignments with nothing but a toothbrush, toothpaste and the plastic-wrapped bar soaps you find in the bathrooms of a Super 8. (His solution for a mosquito bite was nothing so fancy as anti-itch cream, but to press a fingernail into it twice, making an X, something that felt like an epidemiological mistake but always seemed to work.)

I asked my current boyfriend the question because he is fussy but not too fussy. “With whatever’s around,” he said, shrugging.

“With an oil cleanser?” I asked.

“With soap,” he replied. “Why would you want oil on your face?”

“Bar soap?” I said, thinking of the South African.

“If it’s there?” he said, shrugging again.

Often this professed nonchalance is a uniquely French way of masking a deep and abiding pride in one’s accomplishments: “With whatever’s around” might have translated, in other situations, to “with my organic Max & Me cleanser, which is created with oils derived from organic matter blessed by its creators, followed by an exfoliant I have produced from apricot kernel seeds I crushed with my own mortar and pestle.” But it didn’t feel like that this time. And I was asking because I wanted to test his natural immunity to the latest trend to cross over from women’s beauty to men’s grooming: K-beauty.

A brief primer: After percolating on Reddit beauty forums and sites like Into the Gloss for years, the K- (for “Korean-”) beauty phenomenon achieved liftoff in the U.S. market in 2017, when K-beauty products — and the parallel multistep cleansing practice used to deploy them — earned record sales and prompted think-pieces from the likes of the New Yorker’s Jia Tolentino. Devotees posted Instagram selfies of themselves wearing MISSHA snail-mucin face masks (hashtag: #snailslime), while critics dissented: “As someone who grew up among Korean beauty products, I find the world’s sudden fascination with Korean skin care, and its now-famous 12-step regimen, to be comical,” wrote Euny Hong, author of The Birth of Korean Cool: How One Nation Is Conquering the World Through Pop Culture in The New York Times.

Now the trend is coming for the male dermis.

David Cho spent eight years in the U.S. Army before co-founding the hugely influential Soko Glam with his wife, Charlotte; he made the (frankly extremely persuasive) pitch to men on the brand’s blog: “I’ve experienced extreme weather conditions (over 130°F in the desert and -30°F in the arctic tundra) and gone weeks without clean, running water. Even through all of this, I still get compliments on my skin. How?” How indeed.

Good that you asked: Though the exact number of steps may vary, Charlotte Cho laid them out for American readers on Into the Gloss in 2014: eye makeup removal, cleanser, exfoliator, “refresher,” “essence” (“Considered the most important step to Korean women, yet still a mystery to many”), “the ampoule,” sheet masks, eye cream, moisturizer, and night cream/SPF.

Industry experts like Madison Ruggieri, co-founder of Motley Ventures, have seen the evolution up close: “While I think that the number of men actually adopting a 12-step skin routine is going to be minimal, I do think that the exposure to a multi-step skin routine with products that are maybe more targeted and advanced than just the basic face cleanser and face lotion routine is having a lasting impact,” she says. “We see men now seeking out anti-aging focused eye gels and using sheet masks.”

K-beauty brands now produce all manner of cleanser, toner and moisturizer specifically for male clients (read: When Beauty’s new-ish SuperWhen line), though David Cho, among others, will remind guys that a women’s beauty product is just a man’s beauty product in a package with a different font and a more traditionally feminine fragrance. Included in the SokoGlam men’s collection is the Benton Fermentation Essence, a Neogen SPF 50 sunscreen and a low-pH cleanser from COSRX.

The larger question may be whether this is ultimately good news for men or not. Even many of its detractors find value in K-beauty practices (“Put a lot of time, money and energy into your skin, and you’ll probably see results,” Euny Hong concluded in her NYT piece). And there are undoubtedly more holistic benefits to men taking closer control of their skin: “I’ve treated approximately 10,000 skin cancers in my career. When a woman has a skin cancer, she starts to apply SPF every day,” says Miami-based dermatologist Dr. Loretta Ciraldo, founder of the Dr. Loretta skincare brand. “Men are very reluctant to do that, saying that it stings, they don’t like the smell, and many other excuses. Most of my male patients don’t see why they would need to wash their faces except when they are in the shower, and typically they use their body wash for their face.”

It’s hard, though, not to read into the trend’s more sinister implications, like the way it piles pressure on men to look ever younger in the workplace and dating sphere. (Sample headline: “More Men in Tech Getting Plastic Surgery To Combat Age Bias.”) As a woman, I now have a hard-won level of immunity to products and practices that profess to make me younger, more beautiful, more desirable (and apparently, even better at my job). But I worry for my sweet, oblivious boyfriend, and watching him reckon with his skincare options on Soko Glam, I felt the same way that I had when my middle-school-aged niece professed she wanted a Tinder account. Stay innocent, I thought. But don’t forget that SPF.

Navy SEAL Kaj Larsen's Guide to Becoming a Better Swimmer
Fred Couples Slams LIV Golf as Saudi Series Accuses Tiger Woods of Doing PGA Tour's Bidding
The Twilight of the Hellcat
What It's Like to Sail the Mediterranean With Viking for 10 Days
Chants, Cheers and Beers With the Most Powerful Fans in Sports
LIV Defectors Are Raking in Winnings, Except for Phil Mickelson