The Zabar Brothers Strike Out on Their Own With Devon 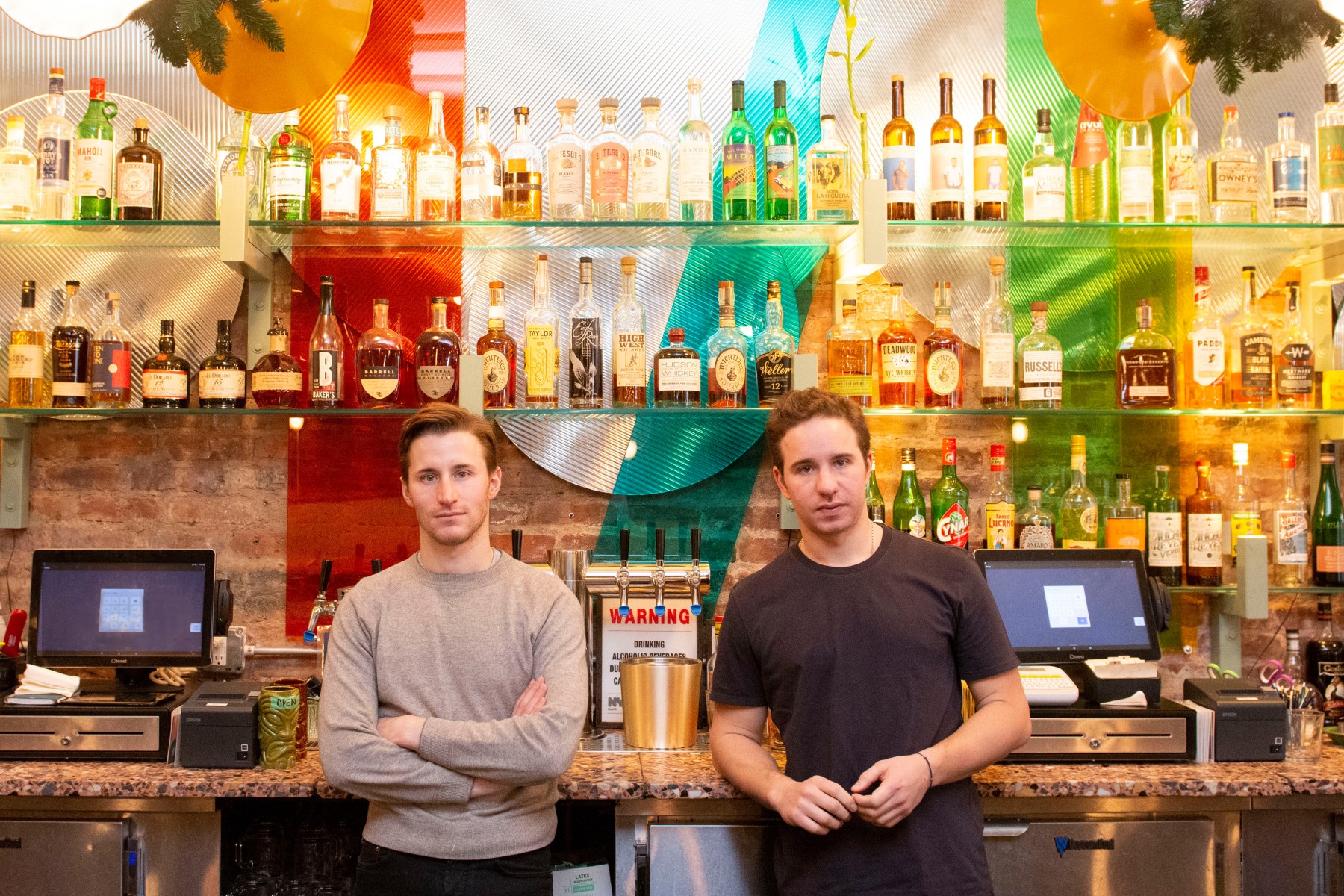 "Oliver Zabar originally opened Devon as a solo venture in November 2018, but was joined by Sasha last summer."
Elyssa Goodman
By Elyssa Goodman / March 3, 2020 7:00 am

“Oh, there’s another thing I need to set fire to,” a bartender quips behind the bar at Devon, a newly relaunched cocktail and bites spot on New York’s Lower East Side. He adjusts his glasses then gets down to business, singeing a cinnamon stick that promptly smokes and wafts through the air. The aromatic spice joins tequila, mezcal, coffee, coconut and yuzu in a ceramic panda glass for a drink called Big Trouble in Little China. Girls in mom jeans and men with circular glasses watch drink after drink cross the bar. The room buzzes with voices, a warm haze of welcoming yellow light. Curved booths and pastel barstools fill with people. Nearby, Oliver Zabar, who co-runs the space with his twin brother Sasha, glides through the room in a grey “Devon Cocktail Club” T-shirt, sleeves rolled up, greeting guests, bussing tables, taking orders, managing staff. There’s no differentiation between him and the other people working on the floor.

Oliver Zabar originally opened Devon as a solo venture in November 2018, but was joined by Sasha last summer. The brothers emerged with their own project after years of both working on their own, independent ventures and working in the family business — their father is famed gourmet food entrepreneur Eli Zabar, and their mother is Devon Fredericks, previous owner of legendary Hamptons gourmet food store Loaves and Fishes. With his father, Oliver began Eli’s Night Shift, a cafe by day and cocktail bar by night, on the Upper East Side. It was one of the first cocktail ventures for the family brand. “I said to my dad early on, if Night Shift is a success, we gotta do something downtown,” Oliver remembers. The family hadn’t previously had any businesses south of 42nd Street. And after three years Night Shift was indeed a success. Oliver wanted to create a space on his own under the Zabar umbrella, and the idea for Devon, named after his mother, was born.

Sasha had been working on his own independent businesses in New Haven, Connecticut at the time, a juice bar and an e-cigarette venture, but moved back to New York full time last summer and began working on Devon with Oliver. Sasha is happier on the backend, working with analytics and numbers, while Oliver prefers to be more frontward-facing, on the floor and working with his hands.

Despite Devon’s original positive press, the brothers quickly felt the first design of the space, with its sleek, modernist edges, actually needed a more spirited update, reorganized seating, a stronger focus on a “bar and bites” experience as opposed to a full-blown restaurant, and a more accessible menu. They set about creating it, working in phases and never actually shutting down the bar in the process. Devon relaunched in November 2019. The new design is inspired by 1980s designers like members of the Memphis Group and with a colorful geometric glass mural laid atop exposed brick, combinations of pinks, yellows, and dark blues adding sophisticated fun. People easily line up at the bar or sit for bites and bevs.

And the bites, by executive chef Harry Cummins, were developed after a whirlwind series of evenings with the brothers and chef Valentin Raffali in New York. “We went out every night, eating, drinking, cocktail bars, seeing what the menus were like, going three or four places in a night,” Sasha says. “I think being here in New York gave them so much inspiration on where they could go with the menu.” This led to the creation of a rather stylish (and delectable) ice cream sandwich in a variety of flavors inspired by everything from Snickers to Reese’s Pieces, but also effortlessly shareable bites like the smashed potatoes with sour cream and trout roe, the endive and gorgonzola dip with blue cheese, lemon, and walnut, and the pizza frita. Cocktails, by original beverage director Sean Sauders are now arranged “familiar to adventurous” in categories “Light/Refreshing” and “Complex/Boozy.”

As the progeny of a gourmet food titan, the mere prospect of opening your own place could be laden with pressure to the point of suffocation. But the brothers seem to take it in stride, managing first their own expectations of what they want their restaurant to be and measuring their work by the high standards they’ve developed as part of a family known for its good taste(s). “I think there’s always a little bit of concern that you’ll live in the shadow of someone like my dad, who’s such a big personality … and has been doing this for so long,” Oliver says. “But I think I’ve come to realize that people like him and they want to support the next generation, they want to support his kids, they want to go see what they’re up to and see what’s new, what’s exciting.”

Plus, the brothers, who have always been close, are now working together to make their own mark on the family brand. They do so while remaining not just siblings, but level-headed business partners. “Working with our dad, he’s a real force of nature, both personality and work ethic. I think I was excited to work with Oliver to pick our battles and work together to make some of these changes that maybe we had thought about or talked about briefly,” Sasha says. “I was concerned about what happens when you don’t agree or what happens during an argument and how that affects your ability to work together in the future, and that really hasn’t happened. There are times when we disagree on things and it becomes like a productive debate rather than an argument. You pick your battles.”

Oliver’s original goal for a fun neighborhood spot is one that the brothers have been able to not just meet, but exceed. Unpretentiously cool, Devon’s Friday and Saturday nights are packed with people, laughing, noshing and unwinding, as are their happy hours throughout the week. “We’ve been growing the clientele, the business, the menu. It all just keeps evolving, whether it’s the people we have or the ingredients or the season, or the chef, I want to keep growing,” Oliver says. “I want people to really understand … these guys are doing great cocktails and great food.”