The best seafood in town, from someone who knows

A day off is a foreign concept for a chef with not one but two thriving LA restaurants. Kicking off his career with the wildly successful food truck-turned-staple Guerilla Tacos, native Angeleno Wes Avila departed that modern Mexican restaurant a few years ago to experiment with other ideas. His new sandwich shop, Angry Egret Dinette, which debuted in October 2020, was the only spot in LA to make the James Beard Awards finalist list for Best New Restaurant this year. Chef Avila quickly moved on to another opening, though, showcasing Yucatán flavors with Ka’Teen at the Tommie Hollywood hotel in December 2021.

At this coastal Mexican spot, which has a lush jungle feel on its outdoor patio, this chef has been able to explore his own favorite food, seafood, through a Mexican lens. “I was born and raised in Los Angeles, so going down to Baja was always a monthly thing,” he says. “Being able to explore coastal Mexican cuisine, and Yucatán style, it’s always something I’ve been really interested in.” His favorite dish on the menu right now is the Pescado Zarandeado, a whole roasted fish that’s been deboned and served with charred tomato salsa, limes and tortillas.

And if you’re heading to Ka’Teen, Avila recommends bringing a group of friends to help deal with the extra-large portions. Most of the grilled meats the restaurant offers for their entree dishes are actually big enough for several people. “Ka’Teen works great for a group of friends that want to get together,” he says. “It’s very much a group thing because all our mains are shareable. It’s a great space to enjoy with friends and family — it’s very much a group activity to come in.”

Avila shared some of his favorite spots around LA to grab a bite to eat when he’s not helming one of his two kitchens, whether that’s on a day off or simply a pick-me-up between heading from one restaurant to the next. 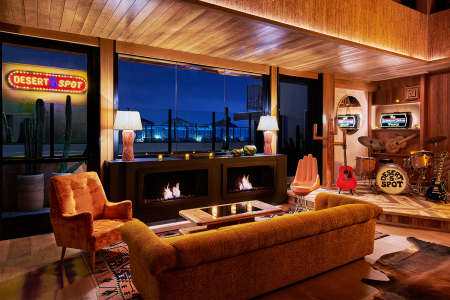 How Tommie Hollywood Became the New “It” Hotel in Los Angeles

In the mornings, I’m shopping for Angry Egret, so I’ll go grab tortillas and bread in East LA. On Saturdays and Sundays, I’ll get tacos al vapor, which is a steamed-style taco. There’s a place right off of Lorena and the 60 freeway that does tacos al vapor, the vapor style or “sweaty tacos.” They can be made out of potato, chicharon, bean or beef. That’s my go-to — that’s one of my favorite things.

If it’s a day off and I’m in Glendale — I live in Glendale — I’ll go to Atwater Village and go to Proof Bakery. I’ll get a sandwich, a canelé and a cortado there.

On days off, I want something that I don’t cook. Something like Sasabune, which is a sushi spot right here in Glendale. Chef Genji Sato comes by Angry Egret — there was a time when he would be here probably three times a week, and he’d come with all his Chargers gear. I saw him one time at Luxe Seafood and realized he was a chef, and he told me he was the chef at Sasabune in Glendale and I should come in. So I went in and Chef Genji showed me a lot of love — the food was great. He went really viral earlier this year because he took the day off to take his son to Legoland.

If not there, maybe lunch at Aqui es Texcoco in Commerce, getting some birria, maybe getting a michelada and a margarita, and then watching a Dodger game after. That would be a perfect day off for me.

A great snack that I get when I’m driving from Chinatown to Hollywood is going to Jade Wok. It’s right off College, and they do a really good house made tofu with mushroom gravy. I’ll go in there when I need some fucking sustenance. It’s this big slab of house-made tofu, mushroom gravy on top with all these Chinese flavors. And then I’ll get a big-ass plate of pea tendrils, because right now they’re in season.

They handpick all the tender greens and saute it hard in a wok with garlic. So I’ll get a big giant plate of shearable greens and a big plate of the mushroom tofu, and just crush that. I’ll be fully sustained and honestly that’s one of my go-to’s without any bullshit. They’re friends because I’ve gone there so much in the last year, but it’s always really fresh and it’s a staple right here in Chinatown.

I love seafood and they always do it right. Michael Cimarusti’s crew always crushes it. They have the freshest seafood and best oysters in town. It’s always consistent, the service is always good, and it’s in a very welcoming area. The trio of chowders is one of my favorite appetizers, and when they have uni, they serve it with toast and lemon. It’s always simply presented and it’s great. But…get the lobster there. You order the two-pound lobster, they ring the bell, let me get that grilled lobster and let’s go from there. It’s always a great experience.

For a drink I’m 100% going to Tonga Hut. It’s unpretentious, and they use really good spiritsin their quality drinks that are not overly sugary and true to the original recipes of whoever invented the drink. I’m a tiki guy, so Tonga Hut is my jam.