A Hunter and Chef Dishes on Meat Pies for Pi Day

MeatEater contributor, Danielle Prewett, the founder of wild game and whole foods cooking site Wild + Whole, has a fondness for hearts and tongues and has therefore eaten a lot of crazy things in her time.

The craziest? Well, that’d have to be a mountain lion, she told Realclearlife.

“My husband killed it,” Prewett told RCL. “I believe I browned it on the stove top and then transferred it to the oven. Then I made a really simple glaze with balsamic vinegar and apricot jelly. I brushed that over it, sliced it very thin, and served it on crostini with goat cheese, caramelized onions and a little bit more of that glaze. It was incredible. Mountain lion is very similar to pork in flavor. It’s a lighter colored meat. However, the texture of the muscular fiber is a lot like beef. They are long and stringy. It’s got some beef-like tendencies, but it looks and tastes like pork.  It’s not something you’ve ever had before.” 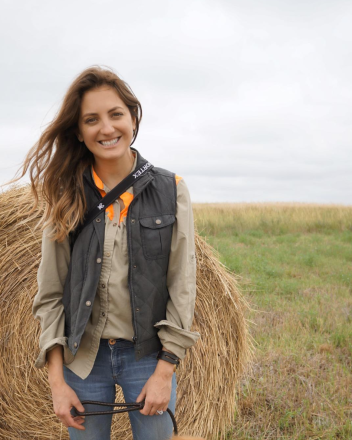 Something you probably have had before is pie, though it likely wasn’t the kind Prewett used to make which she talked about in honor of Pie Day (3/14).

“I used to make shepherd’s pie with venison that I would slowly braise with a lot of red wine,” Prewett said. “Add some aromatics like onions and garlic and make it into a really really thick stew before layering on a puree of potatoes, parsnips, and celery root on top. Everything was always really earthy and robust.”

In general, wild game works well in meat pies providing you do one thing.

“You have to tenderize it first. There’s nothing difficult about it. A lot of people complain that squirrel and rabbit are really tough or really dry, but that’s just a factor of not cooking it down until it’s tender. So any kind of recipe for a pot pie … it’s just like chicken pot pie except you are cooking down a stew with squirrel or rabbit until it’s tender and sliding off the bone. There’s really nothing intimidating, but I think most people don’t understand that to tenderize wild game, you need to invest more time into it. It’s not going to tenderize as quickly as chicken.”

Prewett didn’t grow up hunting or eating wild game but got into cooking gamey meats when she started dating an avid hunter who was always bringing her his kills to cook. “It was an opportunity to cook with things no one else could get because you could not buy it at the store,” she said. “I was initially drawn to the exclusivity factor, and the more and more I cooked, the more I realized how important our food is and how it was making me feel. I had so much more energy.”

Now, she tries to create and share wild game recipes that are pleasing to the mouth as well as the eye. One of the reasons for that stems back to the first thing she made for hunter boyfriend (now her husband): venison.

“He cleaned it and I remember thinking it looked so ugly,” she said. “It was jagged. We’re so accustomed to seeing packaged meat that’s been cut nicely by a butcher. When you are doing it yourself, you become the hunter, butcher, and chef. Now when I cook wild game, I put a lot of emphasis on the visual appeal. If you don’t spend a lot of time butchering and cleaning it, that shows on the plate.” 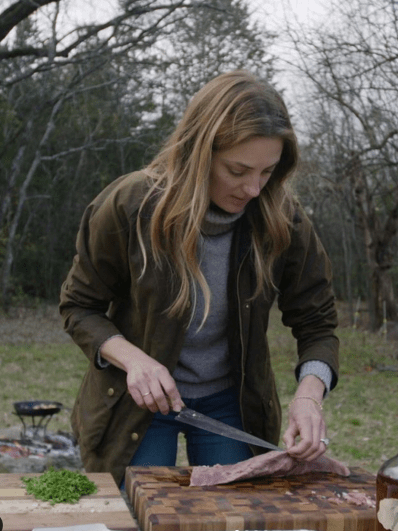 And making an unorthodox cut look pretty isn’t the only rewarding part about working with wild game.

“From my perspective, which is a cook’s perspective, I think the best part is working with something unique,” Prewett said. “In the modern-day world, we’re so used to going to the grocery store and buying our meat and knowing exactly what it is going to taste like. It’s all very standard. With wild game, there’s so much room for versatility. It’s not always going to taste the same because the diet is going to vary depending on where you shot your animal and how it’s been living. There’s a unique factor about cooking with wild game that I’m really drawn to. There’s no one real answer to ‘What does a deer taste like?’ because all around the country people are shooting deer eating completely different things.”

So what does deer pair with?

“Pairing is very similar to what you’d do with any domestic meal,”Prewett said. “If you’re having fish or white meat like rabbit or squirrel, white wine is always a great option. Anything dark like venison, duck, or beef I’d go with a red.”

A pair of pie recipes featuring wild game are below. They are easy as π. 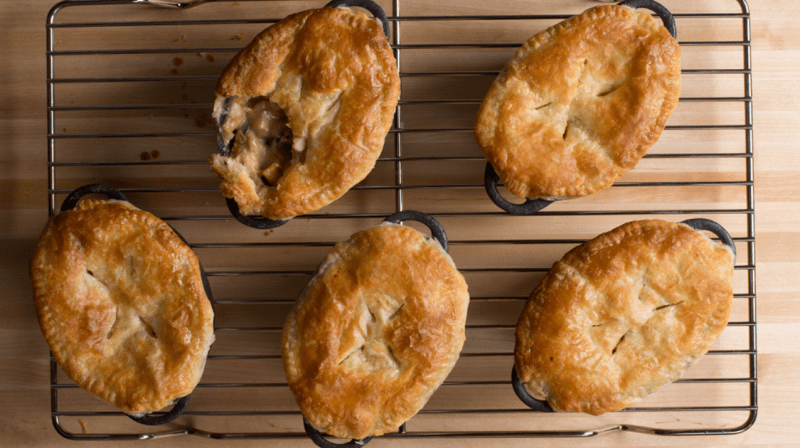 Season the meat with salt and pepper on both sides. Heat the oil in a large heavy-bottomed pot or Dutch oven over medium-high heat.

Working in batches, brown the meat on both sides.

Remove the meat to a plate and set side.

Add the onion and squash to the pan and cook until just tender.

Season with salt, remove from the pan, and set aside.

Add the mushrooms and cook until soft.

Add the garlic and cook for another 30 seconds until fragrant.

Deglaze the pan with the wine (or a splash of stock or water), scraping up any brown bits with a wooden spoon.

Remove the mushrooms and set aside.

Return the meat to the pot and add 5 cups of stock (the liquid should just barely cover the meat).

Bring to a boil, then reduce heat to a simmer. Skim off and discard any scum.

Add the bay leaf and cook at a low simmer for 1 ½-2 hours, until the meat is very tender but not quite falling off the bone. (Squirrel and rabbit have different cooking times. Rabbit joints will be­come flexible at the point of doneness. Both meats are done when they no longer spring back when pressed with your finger or a fork.)

When the meat is tender, remove the pot from heat.

Remove the meat from the pot and set aside to cool, reserving the cooking liquid.

When the meat is cool enough to handle, remove the meat from the bones and discard the bones.

Chop or tear the meat into bite-sized pieces. Cover and set aside.

Heat the remaining 1 cup of stock in a 4-quart pot. Using a fine-mesh sieve, strain the re­served cooking liquid into the pot with the stock and keep warm.

Melt the butter over medium heat in a heavy-bottomed pot.

Add the flour and stir to make a roux. Let cook for 2-3 minutes.

Add the cooked vegetables and stir.

Off the heat, add the brandy if using, then return to the heat and cook until it has mostly evaporated, stirring con­stantly so the mixture doesn’t burn.

Whisk in the hot stock one ladleful at a time. Keep stirring until the sauce becomes thick.

Add thyme and season with salt and pepper to taste. Reduce the heat to low and stir in the cream.

Add the reserved meat. Adjust the seasonings if needed.

Brush the outside rim of the vessels with the beaten egg.

Lay out the puff pastry and cut out 8 rounds slightly larger than the diameter of the ramekins.

Top the ramekins with the pastry and press the outer edge so it adheres.

Brush the tops of the pot pies with the remaining beaten egg.

With a paring knife, make three small slits in the pastry.

Bake until golden brown, about 30 minutes.

Bear Lard Crust : Add the flour, salt, and sugar to the bowl of a food processor. Close the lid and pulse a few times to mix. Cut the chilled bear lard into small pieces. If it gets warm while you are cutting it, throw it in the freezer for a few minutes and then continue.

Pour the cold milk through the chute and pulse until a dough starts to form. Don’t overmix.

Turn the dough out onto a floured board and pat the dough together-don’t knead.

Divide the dough into halves, flatten into discs, and wrap well in plastic wrap.

Re­frigerate for 1 hour before using.

Meanwhile, take your pie crusts out of the fridge and let them sit until they reach room temperature, 10-30 minutes.

When the mincemeat mixture is cool, stir in the brandy and taste. Adjust the seasoning if necessary. Set aside while you roll out the crust.

Take one disc of dough, unwrap it, and put it on a well-floured cutting board or countertop. Flour your rolling pin and tap the surface of the dough methodically to flatten and soften it a little. Begin to roll out the disc from the center out. The dough should not stick too tightly to the work surface; you should be able to easily lift it away at all times. If the dough does begin to stick. add more flour to the work surface. Roll the dough out to a circle that’s about 1/4 inch thick and 11-13 inches in diameter. Brush off any extra flour with a pastry brush and transfer the dough to the bottom of a 9-inch pie dish, allowing the dough to hang over the sides. Add the mincemeat filling in an even layer.

Roll out the top crust in the same manner as the bottom. Lay the top crust over the bottom crust and the mincemeat. Press the layers of pie crust together with your fingers. Trim any excess with kitchen shears and crimp as desired. Use a pastry brush to brush the top crust lightly with egg wash. Using a sharp paring knife, make three slits in the center of the pie

Bake the pie until the crust is golden brown, 40-45 minutes. Allow to cool on a wire rack for 10-15 minutes before serving.