Remember McDonald’s crispy, deep-fried apple pies? The ones from the ‘80s?

Sadly, those originals were discontinued in 1992. But you, dear reader, can enjoy them again, because Chef Eric Greenspan serves them at his Greenspan’s Grilled Cheese. And my friend, they are delicious.

Let me tell you a story.

Earlier this year, Greenspan found himself at a food convention in a dismal suburb outside of Chicago. He was bored to death.

“I’m a firm believer in providence. And so I went off looking for some ventilated packaging to keep my grilled cheeses from getting soggy.”

A sales rep overhears Greenspan say that he wants the packaging like McDonald’s used for their old fried apple pies. The sales rep says, “Did you say McDonald’s apple pies?”

McDonald’s switched those pies in 1992 with a baked option because they wanted something healthier, and probably out of a fear of lawsuits similar to the coffee one.

But McDonald’s supplier still makes them, and some franchises still carry them — like the one in Downey, CA.

Greenspan wanted them so badly — “because they’re perfect, they can’t be fucked with” — that he upsells them to himself to make it worthwhile for his supplier to bring them in.

He calls them Throwback Pies, and he melts Tillamook cheddar on top and serves ’em with a side of vanilla caramel ice cream.

The cheddar option is only on the menu until the 26th, but after that you can still ask for it.

Obviously, we suggest you do.

Nota bene: Last night, The National Geographic Channel aired Eric Greenspan Is Hungry. He has to fight a dog for a gumbo recipe. 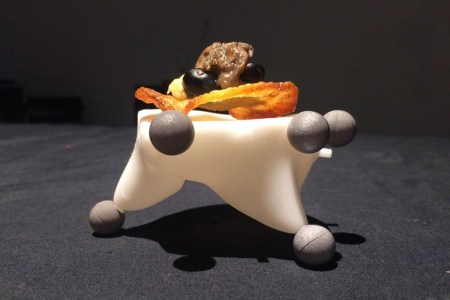