Travis Reinking is in custody, but shots still echo in the Nashville suburb.

Law enforcement stand outside a Waffle House where four people were killed and two were wounded after a gunman opened fire with an assault weapon on April 22, 2018 in Nashville, Tennessee. Travis Reinking, 29, of Morton, IL, is person of interest in the shooting and is suspected to have left the scene naked. (Photo by Jason Davis/Getty Images)
Getty Images
By Steve Huff

A shadow opened fire in the dark. The man, who was nude but for a coat, stood in the parking lot of the Waffle House at 3571 Murfreesboro Pike firing an AR-15 at everyone he could see. Two victims fell immediately. The killer then fired through the window as customers scrambled to hide. He killed two more as he entered the brightly-lit 24-hour restaurant, then stopped to load another clip. That was when 29-year-old James Shaw Jr. saw his chance. He tackled the shooter and pulled the gun away, the hot barrel burning his hand. He tossed it over the counter. Shaw later told the New York Times that the shooter was “mad” at him. “I just wanted to live, and he was, like, astonished, that I wanted to live.”

The shooter got away from Shaw, away from the lights and the chaos he’d created, and vanished in the dark. It was after 3 a.m. in Antioch, Tennessee and four people were dying or dead:

A source familiar with the investigation told me of being struck by “the sheer number of shell casings in the parking lot.” So many casings that those responding to the scene “couldn’t help but step on them.”

It was a small detail that spoke volumes about the hellish assault. 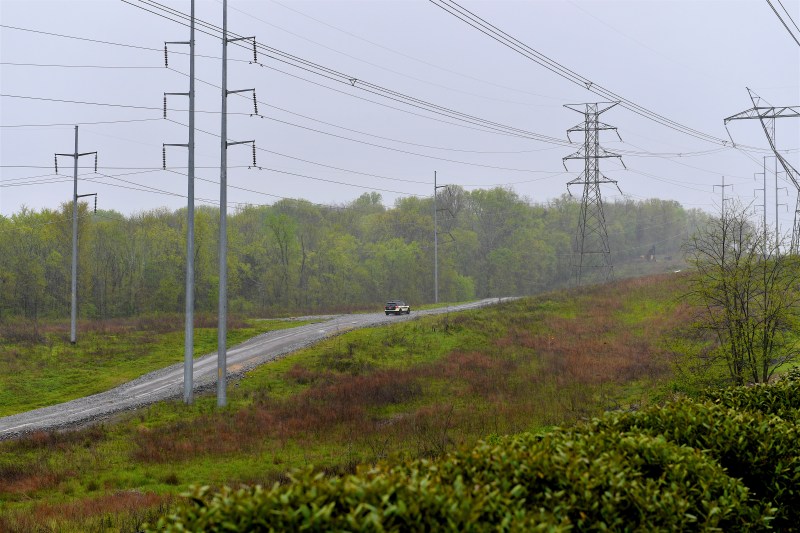 A Sherrif’s Deputy searches the wooded area around Discovery at Mountain View Apartments complex where a man believed to be suspected gunman Travis Reinking was spotted on April 22, 2018, in Nashville, Tennessee. A gunman entered a nearby Waffle House and opened fire and killed four killed and injured two during the shooting. (Jason Davis/Getty Images)
Getty Images

I grew up in Antioch. From birth through age 19, I lived about a mile from that Waffle House location. There was nothing there then. Pin Hook Road and Murfreesboro Pike was another semi-rural intersection between there and nowhere.

When I was a kid, Antioch was Nashville’s outer rim, wild and remote. More hills, trees, and caves than people. A redneck no-man’s land to those who lived in the city’s so-called better neighborhoods like Green Hills, Brentwood, Belle Meade. Even in nearby middle-class Donelson, I sometimes sensed a sneer in the way a classmate reacted to finding out where I lived.

Antioch is the largest Davidson county zip code—37013—and today it’s a fast-growing community that’s re-developing its sense of individuality, its identity apart from Nashville’s city center 12 miles to the north. It may never show up on lists of Nashville’s best neighborhoods, but if people living there now are anything like they were when I was a kid, they’re probably a little proud of that. Gritty is a word sometimes reserved for industrial towns in New England or the Midwest, but there is some grit in Antioch.

Today, there certainly are wealthy people in Antioch, and plenty of pleasant middle-class suburbs. But the median household income is less than $50,000 a year—almost $10,000 below the national average. Just over 15 percent of residents in the 37013 zip code live below the poverty line—just above the national average.

The population is nearing 100,000 and at least half are people of color, like the hero who stopped the massacre, James Shaw. Like the four victims, Taurean C. Sanderlin, DeEbony Groves, Joe R. Perez, and Akilah DaSilva.

Shots in the dark

Jeff Goff was back home after a week in Maine and returning to Central Time was messing with his sleep cycle. The night was warm and the skies clear, so he had his windows open. He was looking at his iPad when the nearby sound of gunfire silenced the frogs chirping in the trees outside. There was a burst, then silence, then another burst. He’d heard shots in the night before and told me it wasn’t necessarily an uncommon thing.

Jeff said he was considering calling 911 when he heard the first siren. It was “followed by what I could only imagine was a parade of sirens and emergency vehicles.” He said he knew it was serious, but “had no idea it would be national news before the sun came up.”

Social media posts told him what was going on, all the police gathered around the Waffle House. Jeff told me he frequented that Waffle House “a lot.” He said he knew some of the employees and he wondered, “Were they there?”

He heard the first helicopter around 4:30 am.

The nature of things 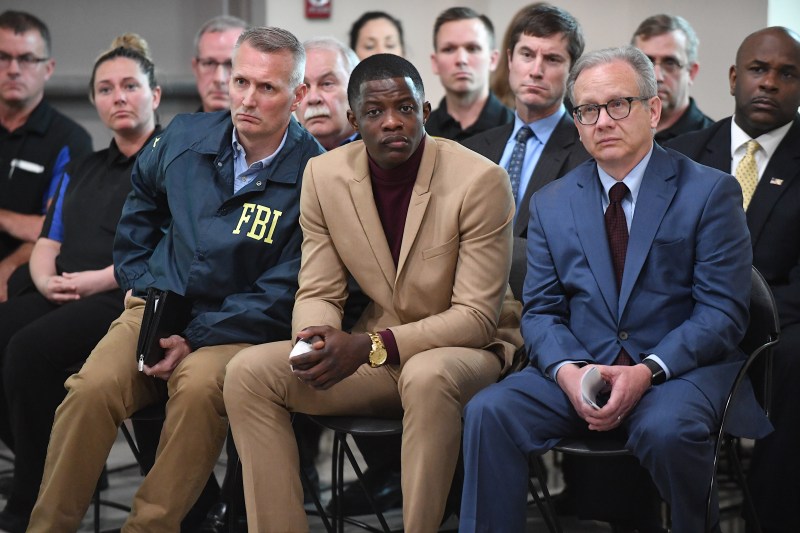 Waffle House patron James Shaw, Jr. (C) who stopped the shooting at a Waffle House where a gunman opened fire killing four and injuring two attends a press conference with FBI Special Agent In Charge, Matthew Espenshade (L) and Metro Nashville Mayor David Briley (right) on April 22, 2018 in Nashville, Tennessee. Shaw, Jr., 29, took action disarming the gunman and ultimately forcing him out of the Waffle House restaurant. Travis Reinking, 29, of Morton, IL, is a person of interest in the shooting and is suspected to have left the scene naked. ( Jason Davis/Getty Images)
Getty Images

“The initial dispatch was for a Nature Unknown.”

That dispatch, said my source (who prefers to remain anonymous), was “Very quickly followed by a multiple shooting victims call.”

The source said that a “Nature Unknown call” will typically happen “when the 911 caller hangs up before a call taker gets all the info they need.”

My source said no one trusts those calls, as they are always “aware that it could be something awful. Ninety percent of the time, it’s not. But ten percent or so, it’s bad news.”

Jeff Goff told me that residents in his neighborhood “were told the shooter was on the loose and was possibly running naked down Murfreesboro Road. Then we heard he was in the woods. Then we heard he had pants on. The helicopters kept circling directly overhead.” Those choppers were searching for Travis Reinking, 29. Police had identified him through vehicle registration and eyewitness statements.

Reinking allegedly made his way through the woods to his nearby apartment after the shooting. There he picked up clothing and shouldered a backpack. It was two hours after sunrise.

Reinking had a talent for getting away. CNN reported he’d been arrested by the Secret Service in July 2017, trying to slip in the White House to meet President Trump. He reportedly said he was a “sovereign citizen” and that meant it was his right to “inspect” the White House grounds.

His guns were taken away and given to his father. Despite a history of erratic, bizarre, and frightening behavior, his father returned them to Reinking.

Reinking moved to Nashville in late 2017 with the intention of doing construction work. He didn’t keep his first job long and quit his second job in mid-April after just one day. Then, about a week before he allegedly entered the Waffle House parking lot, he took a BMW from a dealership in Brentwood. He led police on a chase, but they broke it off, for safety’s sake.

The BMW was found and retrieved from Reinking’s apartment complex. No arrest was made, because police were unsure as to who had parked it there.

“Sorry, not processing info about this well. My internal compartmentalization is working overtime,” my source said as we discussed the case. Seasoned pros in emergency services and police officers must do that, it’s the only way to keep your mind on the job. To stay sane. But the Waffle House shooting challenged that, at least in one way. On seeing the dead, my source said, “there was a— this is probably Southern thing—sense that we should cover the outside bodies out of respect…” They couldn’t, though. It would have contaminated the scene.

Hero James Shaw was at the scene longer than the injured victims, my source said, “he was the last one transported due to less severe injuries.”

Regarding Shaw, Jeff Goff probably spoke for many Nashvillians, all the residents glued to their TVs and streaming video. “We cried when we learned of the heroics by the man who stopped the shooting,” Jeff said, “We watched the press conference downtown and cried again as he spoke so unselfishly about what he did.”

Thirty-four hours after bullets shattered lives at the Antioch Waffle House, Travis Reinking was arrested. He was just over a mile from the scene. He reportedly had a handgun in his backpack. At least 80 MNPD officers, the Tennessee Highway Patrol, FBI, and the ATF took part in the search.

Reinking’s bail was initially set at $200 million. Then someone realized any bail at all was absurd and revoked it.

The first Monday after the Waffle House shooting, Antioch’s Mt. Zion Baptist Church was full, reported the Tennessean. Everyone was there to remember the victims, to say their names:

—Taurean C. Sanderlin, a Waffle House employee, he died in the parking lot.
—DeEbony Groves, a star high school athlete, she was majoring in social work at Belmont University.
—Joe Perez, killed in the parking lot along with Taurean Sanderlin. CBS News quoted his mother’s Facebook status about his death, in which she wrote, “Our lives are shattered.”
—Akilah Dasilva, an Antioch resident and student at MTSU. He was a musician, his nickname was “Natrix.”

James Shaw Jr was there, too, the Tennessean reported. He held his daughter, whom he hadn’t seen since the shooting. “I actually tried to count the hairs of her eyelashes,” said Shaw.

Bishop Joseph Walker III is the church leader. The Tennessean reports he asked those in attendance to stand next to a stranger, then hold their lighted smartphones in the air.

He said, “We are Antioch. We’re strong. We are Nashville strong.”

I live a thousand miles away now, but the bishop’s words ring inside like a good old song from home.

In crime, it’s hard to say anyone ever gets real closure. But according to a news source, several first responders visited survivors at Vanderbilt Hospital Tuesday.

As my own source pointed out, emergency workers are the least likely to have any sense of resolution. “PD closes the case,” said the source, “criminals go to jail. Nurses see patients either get better or not.”

But those who first encounter the blood and the pain? They rarely learn how it turns out for surviving victims.

I Just Flew Three Times in 36 Hours Pre-Fourth of July Weekend, and Let Me Tell You, I Have Notes
It’s the Fourth of July. Do You Know Where Your Fireworks Came From?
Fire It Up on the Fourth: Bobby Flay’s Recipe for Grilled Pork Chops
The Best New Whiskeys to Drink This July
It Seems the Star Defectors of LIV Golf Series Are No Longer Good at Their Craft