Like the alleged Golden State Killer, sometimes secrets hide among the branches of a family tree.

After the arrest of alleged Golden State Killer (GSK) Joseph James DeAngelo, police revealed the novel method they’d used to find him: forensic genealogy. As defined in a 2016 interview by practitioner Colleen Fitzpatrick, forensic genealogy is simply “the study of identity and kinship in legal contexts.”

So, DeAngelo’s arrest came in part from a relatively new and unexpected direction for a pursuit some once considered an absorbing hobby. Using the Golden State Killer’s DNA profile, police searched for a hit on GEDmatch, a kind of self-service site that allows people to find family connections from around the world.

There was a tangential hit. A long-ago ancestor who’d lived in the early 1800s. Using forensic genealogy, investigators made meticulous family trees, tracing family relations, ever-expanding branches of mothers, fathers, brothers, sisters, cousins and so on. In the end, they found DeAngelo, who fit their profile of GSK in too many ways to count.

After learning how the serial killer was fingered, anyone fascinated with cold cases immediately jumped to the next logical step: Who else is lurking in the shadows of the virtual forest of family trees?

At least one legendary unsolved serial case may already be on its way to answer. There are many others with available DNA evidence that’s never matched any existing DNA profiles in law enforcement databases. Leaving aside the huge questions about privacy regarding this kind of investigation for a moment, read about a sampling cold cases—some famous, others obscure—ripe for genealogical investigation below. 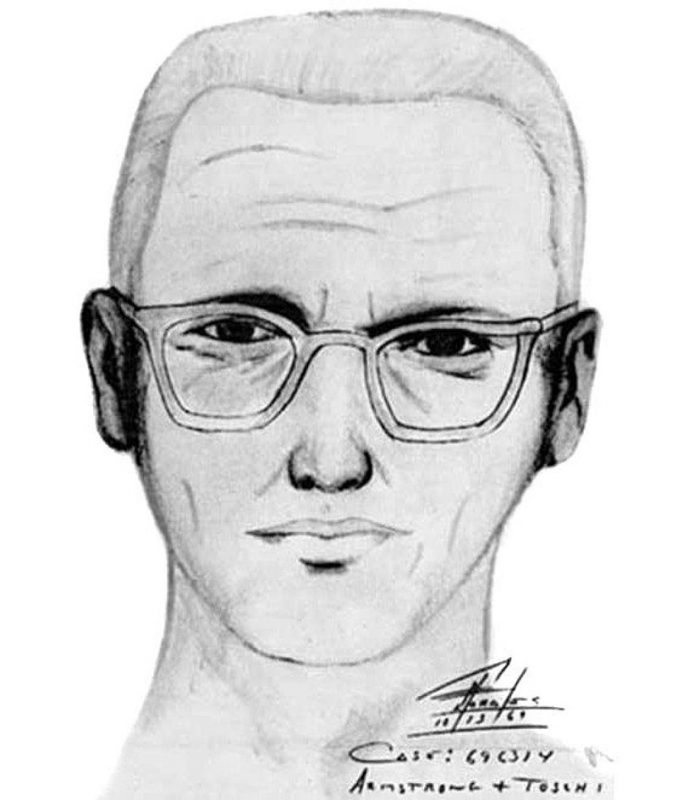 Anyone with an interest in true crime history probably heard of tracking the Golden State Killer with genealogy and thought of the Zodiac. The murders committed by a faceless, taunting psychopath 50 years ago have replaced Jack the Ripper as a source of fascination in the public mind. Zodiac is the ultimate catch, even though there have been much more violent and prolific killers—like the GSK. And the fact is we may soon have some answers about the Zodiac. Investigators in San Francisco and nearby jurisdictions are poring over Zodiac evidence again, hoping to use new, more refined DNA technology to obtain a viable sample—likely from one of the letters Zodiac sent to the press. If they manage to build a full profile their next stop may be a genealogy site like GEDMatch.

The Murders of Jay Cook and Tanya Van Cuylenborg

Details of this double homicide have haunted viewers of Unsolved Mysteries for decades. In November 1987, Jay Cook, age 20, and his 18-year-old girlfriend Tanya Van Cuylenborg traveled from Victoria, Canada into Washington State. The pair were kidnapped and murdered. Tanya was raped, and her body left in Skagit County, Washington. Jay was found dead later. He’d been strangled and beaten to death. Ominously, one official told Unsolved Mysteries that “the way Jay died was indicative of things that we’ve seen before inside the prison walls.” DNA from this case has been used by Parabon NanoLabs to create a physical profile. It seems like genealogical investigation might be the next logical step.

In 2000, DNA again surfaced a previously unknown serial killer in much the same way the Golden State Killer was discovered. Police in Eugene, Oregon discovered the murders of Gladys May Hensley, Janice Marie Dickinson and Geraldine Spencer Toohey were all committed by the same man. At least two victims had been viciously raped before death. Parabon NanoLabs’ Snapshot service was again utilized by the Eugene PD in early 2018, revealing the killer to be a fair-haired and blue-eyed man with northern European ancestry—but that didn’t put them any closer to a suspect. And after all, Parabon profiles aren’t foolproof; any DNA analysis calculating possible appearance and traits could be wrong. It’s easy to imagine some trace of the killer’s family may be online even now, waiting for a match.

A man rampaged across Aurora, Colorado in the winter of 1984, raping, stabbing, and bludgeoning his victims. He saved his worst for the Bennett family, brutally murdering Bruce Bennett, then raping and killing Bruce’s wife Debra and his older daughter Melissa. Then he seemed to vanish. Though this serial killer didn’t take as many lives as the Golden State Killer, the level of violence and cruelty in his crimes was the same—to the degree that it’s chilling he’s never been caught. As with several other cold case suspects, police have secured a portrait rendered from DNA analysis—but no matches from any national database. Could the Hammer Killer, even if long dead, be found on GEDMatch, or 23andMe? Hopefully.

Yes, JonBenet. One of the most intriguing unsolved murders from the end of the 20th century, the 1996 murder of a little girl in Boulder, Colorado has vanished beneath layers of theories, amateur investigations, botched police work. It’s hard to know where the Ramsey case begins, and no one knows where it will end. Police and pretty much everyone else has long suspected the girl’s parents, but some tests of DNA found on the girl’s body have supposedly exonerated John and the late Patsy Ramsey. If that exoneration holds and police still have testable DNA, the Ramsey case might be ideal for a search directed at finding the killer’s extended family. Or, if so many following the case for so long are correct, JonBenet’s immediate family. 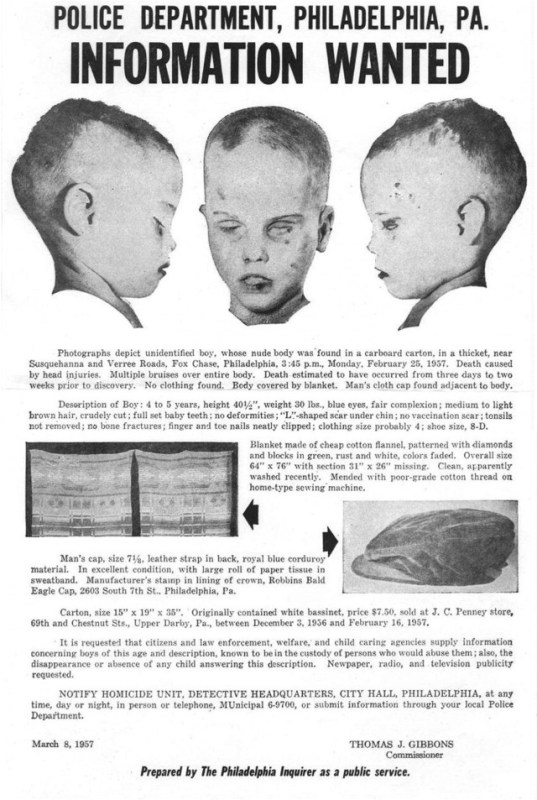 The Boy in the Box information wanted poster (Wikimedia)

The Boy in the Box

In this case, a search for a DNA match to the victim may be what leads to his killer. In February 1957, a blonde little boy was found in a Philadelphia neighborhood. He was no more than 7 years old and had been discarded in a large cardboard box. The boy had been horribly abused and was malnourished when he died. He became a cause celebre in Pennsylvania and across the country but was never identified. He’d been murdered, but any trace of his killer was gone with his name. Police have been able to obtain DNA in the years since his death, and have even attempted to find a familial match—but investigators fear it may be too degraded. There’s still hope, though, as DNA extraction methods grow more refined every year. It’s worth it, even after all these years, to simply have a name, and learn if he had a home.

On Dec. 6, 1991, 13-year-old Amy Ayers, 17-year-old Jennifer Harbison, her 15-year-old sister Sarah, and 17-year-old Eliza Thomas were killed inside the I Can’t Believe it’s Not Yogurt shop in North Austin, Texas. There was a hideously organized aspect of the murders. The girls had been bound, stacked like cordwood, then shot, execution-style. The killer or killers then set the shop on fire. Police found evidence of sexual assault and were able to collect DNA. In 1999 police arrested four men and two were convicted. DNA tests worked in their favor, however—the evidence didn’t match either man. If police can’t find the killer in national databases, a search of public files might unravel the mystery.

The triple homicide of Girl Scouts Lori Lee Farmer, 8, Doris Denise Milner, 10, and 9-year-old Michele Guse was the stuff of horror movies. They arrived at Camp Scott in northeast Oklahoma on June 12, 1977. It was a traditional gathering in a traditional space. That night the girls set up their tents and went to sleep. In the night someone slit their tent open and climbed in, carrying a red flashlight. He raped and bludgeoned Lori and Michele. Doris was tied up and gagged. He took her outside, raped and strangled her. The killer left them in a horrible tableau in the end, outside the tent, wrapped in their sleeping bags. It was a nightmarish crime that rocked the state. A Native American named Gene Leroy Hart was tried and acquitted of the murders. When he died just two years later, many in Oklahoma were still convinced of his guilt. The case has been considered cold ever since. There have been questions about the viability of the DNA in this case, but as of 2017, the investigating agency was still willing to try. Will they ultimately find Hart at the end of that trail after all? Or will they find a complete surprise, someone who had never been on the radar, just like the Golden State Killer? It might be worth it just to try.