When I ask baking experts Chris Taylor and Paul Arguin the one Thanksgiving pie question they’ve definitely been asked dozens of times before, they throw me a curveball. Instead of choosing pecan, pumpkin or apple pie as their favorite turkey-day dessert, the authors of the critically acclaimed cookbook The New Pie get philosophical.

“I think my favorite pie for Thanksgiving is a well-made pie,” says Taylor. As for Arguin, his husband, he says there’s no clear winning recipe he’s compelled to bake every single year. Sometimes he’ll make an apple pie, sometimes a pie with “odd fruits,” sometimes a “weird cream pie.” The one thing that does carry over year after year? “If we’re being invited as a guest to someone else’s house, we’ll bring pies.”

This Thanksgiving, even though you yourself are probably not an award-winning baker, there’s a good chance you’ll be in charge of pie at some point. If you’re hosting a feast at your house, pie is an essential. If you’re in charge of bringing a dish, pie is a no-brainer. However, making a homemade pie is still a challenge many people may not be up to, pandemic-induced baking boom notwithstanding.

If you think your only options are making your dessert from scratch or buying it from the store, though, you’re wrong. There is a third option that’s quite possibly the ultimate holiday hack: zhuzhing up a store-bought pie. There are a number of ways to add your own touch to a pre-made Thanksgiving pie that will not only impress your friends but completely transform what is often a mediocre dessert into a scrumptious delicacy.

The first quick-and-dirty recipe I came across is a simplified version of a pumpkin pie Taylor entered into the National Pie Championships. “I came up with adding a dulce de leche,” he explains. “It’s a little bit of sweetness, but it’s not too sweet.” As the couple’s cookbook states, you can find cans of this in your local grocery store next to the sweetened condensed milk or in the Hispanic/international food aisle. After warming it up and spreading on top, Taylor adds crushed toffee bits for some much-needed textural contrast. “I think they really set it off,” he says.

But for this holiday season, I asked Taylor and Arguin, whose latest book Fabulous Modern Cookies came out in April, to recommend a few other hacks, and they generously obliged.

“Some of them might sound a little fancy, but we really tried to restrain ourselves in the advice we’re giving today,” Arguin says. “So trust me, these are all very doable things you can do.”

“Your standard grocery store pecan pie, usually it’s going to be that layer of nuts over that sweetened goo layer. It’s usually a pretty sweet pie, so there’s not a lot more sweet things you want to add to it. One extremely simple thing you can do to really make it shine is get some flaked sea salt, like Maldon Salt, or even a smoked sea salt and just sprinkle some flakes of sea salt on top of the pie. That will really wake up some of the flavors and the salt can help balance out some of the sweetness of the pie.” — Paul Arguin

“Another thing you can do [to a pecan pie] is add a little chocolate to it. Not a whole lot of sweet chocolate, but if you got a really dark, bitter chocolate, like a 70%, something like that, you can make a ganache. That sounds fancy, but making a ganache is so easy. Buy some heavy cream and a four-ounce bar of chocolate. Put a half cup of the cream in a bowl, heat it up in the microwave just until it’s boiling, and if you’ve already broken up that four ounces of chocolate into little pieces just toss it all into the bowl of cream. Wait about 30 seconds to a minute and then stir it. Take a little rubber spatula and stir it around and it’ll melt — it’ll look kind of mottled initially — and keep stirring for about a minute. It’s all going to come together into a smooth, creamy, dark sauce you pour right over your pie. Pop that back in the fridge and it’ll set. Now you’ve got a nice dark chocolate layer on top of your pecan pie.” — Arguin

“But you could do so much more to that. Instead of the vanilla, you keep your cup of heavy cream, you keep your two tablespoons of powdered sugar, but you can add a tablespoon of cocoa powder if you want a chocolate whipped cream, which could go really well with a pecan pie. You can add two teaspoons of molasses, so you get a little bit of sweetness, but a little bit of darkness that could go with a variety of pies, including a pumpkin pie. Or liqueurs work really well — liquors or liqueurs. Two tablespoons of bourbon, that goes excellent with an apple pie. Two tablespoons of dark rum could go really well. Cream sherry, something like a Grand Marnier or triple sec could go really well, especially with a pumpkin pie; you get that orange and pumpkin flavor, which is a really good combo.” — Chris Taylor

“Another really simple thing to do is toast some coconut. In the grocery store in the baking aisle, right by the chocolate chips are usually bags of sweetened flaked coconut. Just grab a bag of that, sprinkle it onto a baking sheet, put it in the oven at 350 degrees for about 7 to 10 minutes. Every two minutes, look at it and stir it around a little bit until it’s a nice tan color. Take it out of the oven and now you’ve toasted coconut. You can sprinkle that on top of a pumpkin pie. A little bit of chocolate along with the toasted coconut on top of pecan pie works really well. It’s an easy one to augment the pie with. You can do that on top of a Key lime pie too.” — Arguin

“Let’s say…you’re the last guy at the grocery store and all that’s left is maybe an ugly pie or two. That’s my lot in life, I have to deal with this ugly pie. Go ahead and grab a little bit of ice cream as well. One fun thing you can do if you really want that pie flavor, but you don’t want to stare at that sad looking slice of ugly pie: make it into a milkshake. Take some ice cream, some milk, go ahead and make a nice, simple vanilla milkshake and throw in a slice of pie at the end. Now you’ve got some crunchy bits of crust and the fruit flavor all swirled throughout your milkshake. You could do that even with the leftovers. So by day two or three of that last slice of pie that’s just started to wilt and sag — toss it into the milkshake.” — Arguin

If this is inspiring you to skip the store-bought dessert and actually take a crack at making your own crust and filling, check out Taylor and Arguin’s endlessly inspiring cookbook The New Pie. 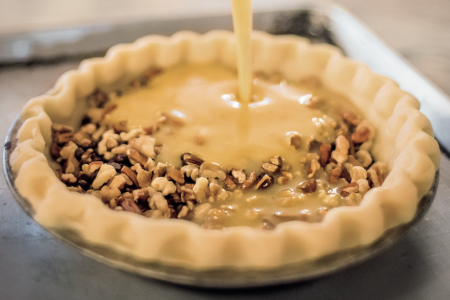 Pony Pie Is the Bourbon-Soaked Dessert Your Holiday Table Needs 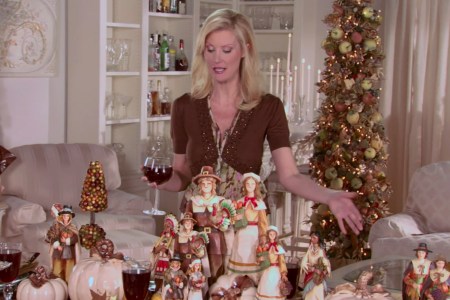