Where to Find the Best Hot Cocktails in Chicago

There’s a long winter ahead of us, which means you have time to try them all 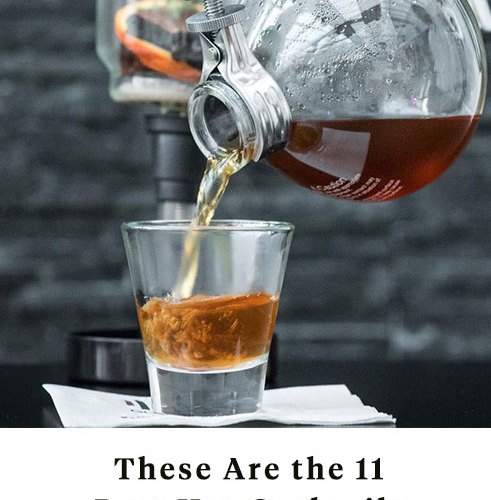 “It’s great to see hot cocktails becoming more of a standard — you can pretty much go to any bar and they’ll offer it now, which I love,” says Alexandra Wright, a Chicago-based spirits consultant and events producer who’s spent years behind the sticks at Logan Square trailblazer Lula Cafe, among other beloved venues.

These days, Wright finds herself fully immersed in the world of hot cocktails, working closely with winter-friendly booze brands Bertoux Brandy and Apologue Liqueurs to throw hot toddy competitions and help to create steamy menu additions around the city.

“Drinking culture here is warm and cozy in general and Chicago’s winter is super long,” she continues. “Hot cocktails have always been an awesome way to capitalize on that.”

As Wright notes, hot cocktails have become a Chicago bar staple in recent years, jazzing up seasonal beverage programs and enticing drinkers from Hyde Park to Rogers Park with their soothing aromas, palate-pleasing spices and lusciously complex (not to mention devilishly intoxicating) makeups. And it’s not just customers that love them — it turns out they’re a highlight for bartenders, too.

“One of the best things about hot cocktails is the unique way you can infuse flavors,” says Wright. “There’s a lot of natural potential for infusions within the glass because you’re using heat to macerate flavor. It doesn’t need to just be spirit, sugar, acid.”

Any chef will tell you that applying heat to spices and other flavoring elements is a key part of extracting an ingredient’s full sensory powers, and the same goes for cocktails. While chilled components like ice and carbonated soda can numb taste buds and mute bold flavors, incorporating warm liquids like tea, coffee or cider into a cocktail has the opposite effect. The one factor it can tone down is potency.

“It’s easy to feature overproof spirits in hot cocktails because you’re using water as a dilution,” Wright explains. “It’s a great way to carry all the flavors of overproof ryes or overproof rums, even Navy Strength gins can be really beautiful. I think a lot of people automatically associate whiskey as the base spirit, but I like to see people stray away from that.”

Whether you prefer playing it safe with a good, old-fashioned brandy-spiked toddy or pushing the envelope with a fragrant botanical-forward gin elixir, we can all agree that there are few things more relaxing than spending a cold winter’s night cuddled up with a simmering mug of boozy deliciousness.

“Hot cocktails are great,” says Wright. “The heat slows things down and makes the whole experience more intentional, which I think is nice. You’re not slamming it, you really just have to sit back and sip.”

Take a moment to taste your way through Chicago’s top toddy purveyors at these 11 expert-approved area outposts.

“For Lula, rather than using hot water, I used hot oat milk,” says Wright of the Gaudy Toddy, an herbaceous, creamy and golden-hued sipper she designed for the all-day Logan Square mainstay. “Oat milk is great because it works as a natural thickening agent in cocktails. Then I tried to play on medicinal characteristics like ginger, turmeric, Apologue Saffron and brandy. The bar obviously crushes during the day service and hot cocktails are a surefire way to get people to start drinking at 9 a.m. — I mean, it’s hot, so it’s like coffee.”

If pink is your thing, head to this hip Logan Square craft cocktail pioneer for an insulated glass mug of magenta magic. Inside, peppery, alpine-kissed Napue gin from Finland’s Kyrö Distillery joins forces with steamed oat milk to form a sturdy yet supple base for woodsy layers of beets, honey and cinnamon. One sip and you’ll swear you’re traipsing through the snow-covered Nordic countryside in your warmest (and most fashionable) winter boots.

This covert Wicker Park favorite is famous for its discerning cocktail menu and talented bar staff, two winning elements fully embodied by An Occasional Dream. The seasonal stunner combines spiced coconut, Plantation Xaymaca Rum, and potent Plantation O.F.T.D. Rum into one sweet, sexy and endlessly sippable package. Make sure to tote yours over to a plush seat beside the roaring fireplace for ultimate enjoyment.

The Rocking Chair, a corn whiskey- and blended scotch-fueled hot toddy doused with savory Apologue Saffron liqueur, warming Journeyman OCG Apple Cider liqueur and citrus-laced Averna amaro, tops the recently-revamped menu inside this intimate Uptown hideaway. “I wanted to highlight Apologue’s delicious Saffron liqueur, so I reached for a split base of grain and corn to create the proper canvas,” says Larry’s beverage manager Mike Treffehn. “The herbaceous bitterness of Averna added some depth in flavor and texture and Journeyman’s OCG Apple Cider Liqueur completes the picture of wintertime coziness.”

Three Dots and a Dash

This subterranean River North tiki mecca is keeping the tropical vibe alive this winter with its own spunky rendition of a classic Hot Buttered Rum. The dangerously delicious combo starts with a finely tuned house rum blend then explodes with aromatics from heaping doses of cinnamon, cloves, allspice and nutmeg before succumbing to the belly-warming powers of smooth Nordic butter.

As the esteemed little brother to Wrigleyville head-turner Mordecai, this handsome second-floor clubhouse has built a reputation as a spirits connoisseur’s home away from home with artfully curated seasonal menus highlighting an impressive range of both familiar and obscure bottles. The latest iteration features Camping, a cold weather favorite whimsically described as having notes of “Bonfires, Dewy Tents, Pumpkin Carving, Condensed Breath,” sets itself apart with a mix of smoked squash Cachaca, burnt sage and a complexly bitter Czech digestif called Becherovka.

Hop heads take note — there’s much more to everyone’s number-one sour beer purveyor than an array of award-winning tart brews. Namely a killer cocktail program, headlined by the ever-exciting rotating hot toddy. This month’s version combines two types of rum (Plantation Dark plus a punch of sweet Plantation Pineapple), bourbon and apple-scented Calvados with orange and black teas, honey, fresh lemon juice and a dash of Suze, a gentian root apéritif imbued with a wintergreen whisper of the French Alps.

For their standout Passage to Ceylon toddy, this nautically accented Heisler Hospitality original called upon the soul-hugging powers of brandy, rye whiskey, English Breakfast tea and winter spices then topped it all off with a lid of fluffy, nutmeg-dusted whipped cream. And as if you needed even more incentive, for each toddy ordered two of your hard-earned dollars will go towards the Chicago Food Depository. Now that’s a win-win.

Larry’s 50 Funniest Grievances on “Curb Your Enthusiasm,” Ranked
100 Ways to Live to 100: A Definitive Guide to Longevity Fitness
Jerry Seinfeld Shares His Favorite "Seinfeld" Joke
The 12 Sci-Fi and Fantasy Books That You, an Adult, Should Read
The Beautiful Molecular Relationship Between Cannabis and Caffeine
The Fitness Regimen That Got Daniel Craig Through Five James Bond Films

How a Long-Lost Lou Reed and John Cale Documentary Was Finally Resurrected
First Drive: The Genesis GV70 Is a Premium SUV at a Bargain Price
Everything You Need to Know Before Deleting Yourself From the Internet
Save 20% on Jewelry for Her at Aurate
Save $35 on One of Our Favorite Cozy Hoodies From Marine Layer
Looking for an Unbelievable Deal on a Mattress? Casper Is Having a Big Sale.
Save $90 on This Merino Wool Sweatshirt From Icebreaker
Huckberry Opened a One-Stop Shop for All Things American-Made
A.P.C.’s Wool Winter Coat Is 40% Off at Shopbop

The Fitness Regimen That Got Daniel Craig Through Five James Bond Films
An Offroad Motorcycle That’s Texas Tough … and Eerily Quiet
Oral Sex Is Still Taboo. This Dating App Wants to Change That.
How to Join the 1,000-Pound Club at Your Gym
The Official Uni Watch 2021-22 NBA Season Preview