For decades there were no working distilleries in Dublin. Now, Ireland's comeback has officially arrived.

Roe & Co is just one of the new distilleries bringing Dublin back to the forefront.
Jake Emen
By Jake Emen @ManTalkFood

Irish whiskey has always been a powerhouse, right? Jameson is one of the most recognizable names in drinks after all, and Bushmills is the oldest licensed distillery in the world, dating back more than four centuries.

Yet, the category was verging on extinction by the 1960s. By the ‘70s, there were only two operational distilleries in the whole of the country: Midleton, where Jameson and a litany of other consolidated brands were made, and Bushmills, also then owned by the same company.

How did the industry collapse? Gradually, and then suddenly, as they say. A couple of World Wars, the Irish War of Independence, Prohibition, the rise of Scotch whisky, and then, of vodka. It all played a part. Now, after decades of stagnation, the country is reclaiming its role in the world of whiskey.

“Back in the 1890s, there was no question as to where the center of the whiskey world was: it was Dublin,” says Dan, an enthusiastic guide at the Irish Whiskey Museum in the heart of the capital. At the time, it was estimated that about one in every three people in Dublin were directly or indirectly involved in the production of alcohol, and almost three quarters of the whiskey sold around the world was Irish. As sales slowed, and distilleries closed and merged, Irish whiskey eventually dwindled all the way down to a minuscule 1% of the market.

Following the consolidation of Ireland’s remaining players — a move, which should be noted, did preserve the industry and many of its legacy brands, and allowed for an eventual comeback — there was no whiskey in Dublin. For decades, Dublin was dry. Well, that’s not fair. It was still home to endless pubs and craic, and eventually incredible stores such as the Celtic Whiskey Shop, and attractions such as the Guinness Storehouse and the Jameson Bow St. experience, a visitor’s center but notably not a production site. Still, no whiskey was being made anywhere in the city, a harsh reminder of downturn and depression as the spirit’s onetime epicenter remained entirely denuded.

The Irish Whiskey Museum, which offers guided tours and tastings, chronicles the rise of the liquor’s production in the country, its fall and its current rebirth. When it opened in 2014, it also happened to herald a new dawn for Irish whiskey in Dublin: by the next year, actual, honest-to-goodness whiskey distillation returned to the city in a flourish in the form of Teeling Distillery. 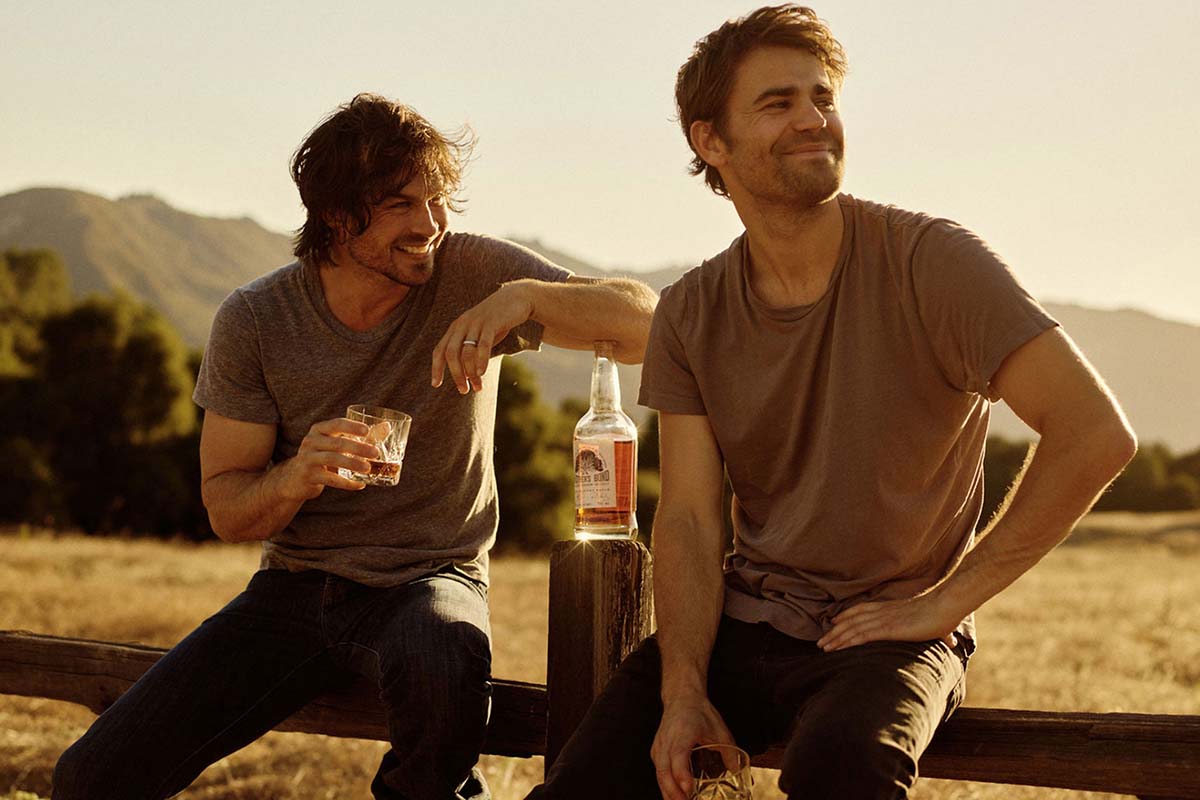 Review: Brother’s Bond Wants to Be More Than a Celebrity Bourbon

Ian Somerhalder and Paul Wesley aim for the whiskey connoisseur with their second expression, a cask-strength, four-grain expression

Now the Irish whiskey category on the whole is healthier than it has been for about 125 years. In 2021, there were 5.9 million 9-liter cases of Irish whiskey sold in the U.S., representing $1.3 billion in sales, according to the Distilled Spirits Council of the United States. It’s been a meteoric two-decade surge since 2002, with overall growth of 1,260% fueled by a staggering 9,102% growth in the super-premium niche.

Those legacy brands should be commended for opening up their stills, and their stocks, and releasing a litany of high-end and experimental offerings in recent years. At the same time, scores of craft brands have emerged, and while many continue buying their juice from the big boys, there are now approximately 40 operational distilleries across the island, with another two dozen or so in some stage of planning or development. Teeling was first out of the gate in Dublin, and has since been joined in town by the likes of Roe & Co, Pearse Lyons and the Dublin Liberties.

“Being the first back in Dublin, there’s a certain responsibility there, but also an opportunity to paint the picture we want,” says Alex Chasko, Teeling’s master distiller.

It’s almost taken for granted today: of course there’s whiskey made in Dublin. Duh. However, it wasn’t long ago when that wasn’t the case. When Teeling opened its doors in 2015 it was a watershed moment for Irish whiskey, and for the city which was once its proud home. It also meant the distillery needed to start from scratch in terms of education and outreach, both to Dublin natives and visitors alike.

“Seven years ago, we really had to start with what Irish whiskey was and its history,” says James Kilgannon, the distillery’s brand ambassador.

In the years since, the Teeling distillery and its product line have both come of age, with one early milestone being the release of their own single pot still whiskey in 2018. This category is distilled from a combination of malted and unmalted barley, with the style having been created originally as a means of evading the tax on malted barley. Who doesn’t love an origin story like that?

It’s become a unique tenet of Irish production, though, and combined with a triple distillation process produces a spirit without many close comparables in other whiskey categories. Single pot still whiskey is showcased by brands such as Redbreast and Green Spot (both under the Irish Distillers umbrella and made at Midleton), which for many drinkers represented the lone shining lights amid the darkest days of the country’s whiskey history.

Bringing more Irish single pot still to the world, and having made it themselves, was therefore no small feat, and for Teeling, this category remains the core of their lineup and production. “It’s a modern, Dublin pot still whiskey, we’re not trying to replicate anything,” Kilgannon says. “People are asking for Irish pot still now, which is incredibly exciting.”

Teeling also distills single malt, offers single grain whiskey, and produces blended whiskey, a combination of the two. Collectively, this represents the four styles of Irish whiskey. At the distillery, they use those different starting points in numerous ways, producing the popular peated whiskey known as Blackpitts, for instance, along with an ever-growing assortment of cask finishes.

Not to mention the top of the product line, the Vintage Reserve Collection, a series of whiskeys with new releases over three decades of age, using remaining whiskey stocks obtained from the Cooley Distillery. “The key for us is to use that stock wisely,” Chasko says. They’ve been doling it out in select (and spectacular) small batches, and still have plenty in the reserve tanks to come, though it’s not an inexhaustible supply. Cooley, meanwhile, is notable for becoming the third active distillery in Ireland when John Teeling opened it in 1987. He sold the distillery in 2011 (it’s currently owned by Beam Suntory), and went on to launch the massive Great Northern Distillery, while his sons Jack and Stephen began their own project with the family name front and center.

The New Distilleries to Know

At Roe & Co, in-house production is all about single malt whiskey, while the name is an homage to what was once Dublin’s largest whiskey distillery, George Roe & Co. “They kind of owned Irish whiskey at that point [in the 19th century] in terms of output,” says Billy, a guide at the distillery. “But everything goes terribly wrong.” And so it did for the whole industry, of course.

The new distillery opened in summer 2019, which means it will have self-distilled single malt at three years of age by this summer, though they aren’t planning to release anything made in house until it’s more thoroughly matured. Their product line is entirely sourced for the time being, with the brand’s signature offering unofficially dubbed 106, named for the 106th trial blend in an extensive search for the right profile.

It’s a grain-forward blend and was designed to be approachable, but also versatile in cocktails. One tour option at the distillery includes a flavor workshop cocktail class where that idea can be put into practice, while the distillery’s beautiful bar space showcases its spirits — and those from across the Diageo portfolio, of which it’s a part — in elaborate and inventive drinks of all varieties.

“We’re moving away from the idea of what’s ‘traditional,’” Billy says. If you like your whiskey in a cocktail rather than poured neat, why should they argue with you about it? “And the more people drinking whiskey the better.”

Just steps down the road is Pearse Lyons. It’s where your prayers may yet be answered, as the distillery is located within St. James Church, its copper stills positioned beside gorgeous stained glass scenes depicting the whiskey industry. The distillery is capable of producing all four types of Irish whiskey in-house, across a lineup that currently includes self-distilled products, such as a five-year single malt, and sourced products including older malts, and blends between the two.

With its unique homebase, the distillery leans into the notion of telling not only the story of Irish whiskey, but of Dublin itself. Tours include a history lesson on the church and its place in town — “We’re surrounded by Guinness here,” says Sheila, a tour guide, pointing out the many buildings in every direction tied to the city’s signature drink — as well as the adjacent cemetery and the notable figures buried there. The list, apparently, includes a few relatives of the late Dr. Pearse Lyons, the distillery’s founder.

The first church on the site was built in the 1100s, but it went through several iterations up through the modern age. Lyons acquired the out-of-service grounds in 2014 and refurbished it, and the distillery opened its doors in 2017. Today, at its altar are two copper stills (ironically from Kentucky producer Vendome, whereas sister bourbon distillery Town Branch uses Forsyths stills from Scotland), and unconsecrated or not, is that not holy? The water of life. Aqua vitae. The spirit that King Henry II of England noted was being made in Ireland at least as far back as 1170.

“For 40 years, we had no working distilleries in Dublin,” Sheila says. “That isn’t right.”

No, it isn’t right, not with a nine-century history of production in the country. It’s only fitting then that the industry is alive and thriving once more in Dublin, its one-time world capital. “There are so many distilleries coming on board, the landscape has changed dramatically,” Chasko, Teeling’s distiller, says.

“But everyone is doing something different,” Kilgannon adds. “It’s competitive in Dublin, but in a healthy competition kind of way. The whiskey industry here is a community, we all know each other. It’ll be interesting to see what it’s all like in five to 10 years.”

The whiskey will be older, that much we know. Sounds like we better plan to check back in on it, then.