RCL spoke with the first-time author about how family and a love of sci-fi informed his epic tale.

Mike Chen’s debut time traveling novel, Here and Now and Then, follows Kin, a secret agent living in 2142 who’s sent back in time to 1996 on a mission. But his target is more ruthless than Kin anticipates and when she shoots him in the stomach, she disables the tracker implanted under his skin—also known as his ticket home to the future. Stuck in the past with his memories of life a century-and-a-half into the future rapidly deteriorating, Kin starts a log of everything he can recall—and a new family. But when the future comes calling and unceremoniously drags him forward, the time traveller breaks all the rules to contact his teenage daughter, Miranda. When that connection sets in motion a government plan to kill her by the very same agency Kin works for, he has to figure out a way to bridge the gap of time to save her life. 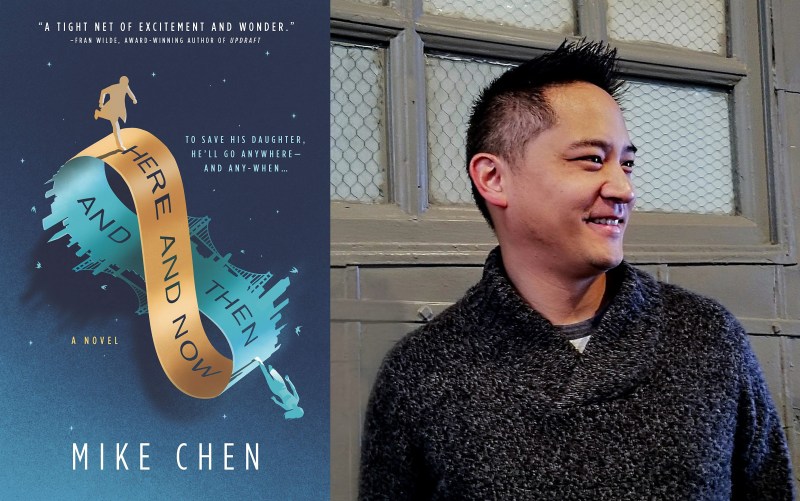 Mike Chen’s new time-traveling epic all comes down to what a father would do for his daughter. (Author headshot by Amanda Chen, cover art by Gigi Lau and Emmanual Polanco)

RealClearLife: I noticed that the dedication in your book reads “For Amelia,” is that your daughter? Was she your inspiration for writing Kin’s daughter, Miranda, and for the central relationship in the book to be between a father and his little girl?

Mike Chen: Yeah, Amelia is my daughter, but she’s only 4-years-old in real life. I was writing the bulk of this when we were planning on getting pregnant and while my wife was pregnant. The original manuscript I was working on and sending to agents before the book became what it is now was on its last legs, and I needed a new concept. If you look at relationships in general, I think the most dramatic stakes come out of the parent-child dynamic. As I became a parent, I was thinking about pushing those stakes and getting a better understanding of how parenthood really changes you.

RCL: There’s no real mention of skin color or race in your book—it’s something that I noticed while reading, that I wasn’t quite sure what everyone should look like. Was that a conscious decision for this future realm?

MC: I don’t consider myself to be an overtly political writer, but if you look at my Twitter, its very clear where my beliefs are. So when I was working on the book, I really wanted to portray a world that I want to see. I’m in a mixed-race marriage and I’d say 60 to 70 percent of my friends are in mixed-race relationships. There was an issue in Time, I remember, that featured a computer averaging of what all today’s mixed-race children and their kids will look like in 10 years and the kid had medium features and tan skin. It’s like Bono said, “all the colors will bleed into one,”—that’s where that idea came from.

Kin is black, and in having a black character I was like, I’m not going to write from a contemporary point of view that I can’t fully understand, so I’m going to write it from the future where, hopefully, it doesn’t matter anymore.

RCL: How did you decide that aging and the idea of communicating with someone through time was going to play a role in your story?

MC: I was watching a lot of Dr. Who, so I knew I wanted to play with the theme of time travel. There’s an episode [from that show] called “School Reunion” that largely deals with traveling through time and aging. It’s really close to a Star Trek episode called “The Inner Light,” which deals with aging through time travel and being in touch with someone across time.

RCL: Is the science in the book based on real theory or is it all part of your imagination?

MC: A very tiny bit is real. I was once a mechanical engineer and I took one quarter of quantum physics [in school]—it was the hardest class I ever took in my life. There was a lot of theory involved and part of what I remember, that stuck out, was how to send a particle through time. But then we got into the math and I was like, “I can’t f-cking do this” and that was after three years of calculus. So, in creating the rules for this book, I wanted to have an internal logic that was consistent, like there had to be a reason why they couldn’t keep going back in time or so far forward. It’s loosely based on what I learned in quantum mechanics; that it takes a lot of energy to send something back in time. That was basically the only thing I gleamed from actual science—to put limits and rules into my world.

RCL: Being a self proclaimed sci-fi geek, are there writers in the genre who inspire you or who you aspire to be mentioned in conversations about sci-fi with?

MC: I would say that, if you look at my book, the tone I’m trying to set for future work is super character-driven as opposed to an epic space opera. I’m hoping to hit the same vein as Emily St. John Mandel’s Station Eleven, or the way Neil Gaiman does magical realism. It doesn’t have to be hard sci-fi with intense science-y based rules like, “How are we going to save the universe?” my goal is to write very character-driven prose. Peng Shepherd, she had a book come out last year, The Book of M, and it really struck the same tone as Station Eleven. Her success, and to see that there was an appetite, a market for it, was really encouraging for me.