Art of Diplomacy: Inside the US State Department’s Curated Collection 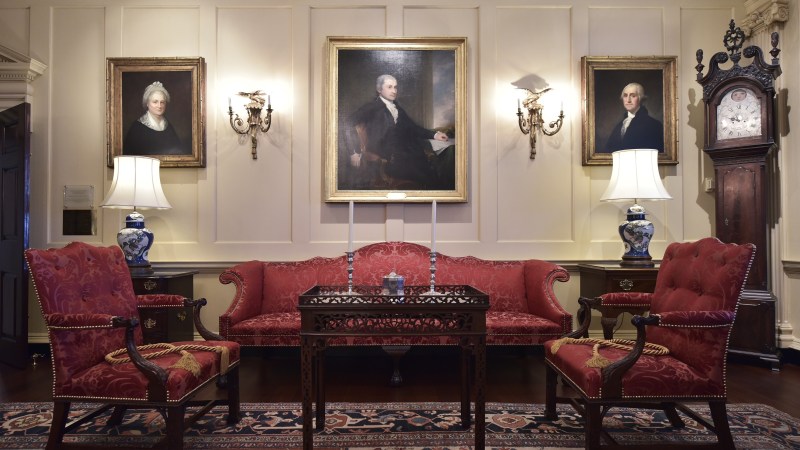 The elevator brings visitors up out of the dull, beige maze of the US State Department’s bureaucratic warren and back in time to a hall lined with period décor recalling the era of the American Revolution.

A porcelain sculpture produced in the Niderviller ceramics factory in France to commemorate The Treaty of Alliance and The Treaty of Amity and Commerce, shows King Louis XVI (L) and Benjamin Franklin (R) is seen in the State Department (Mandel Ngan/AFP/Getty Images)

When the state rooms were first opened in 1961, the institutional office furniture made them look, in the words of their late former curator Clement E. Conger, “like a 1950s motel.”

“It was a disaster by any standards for elegant entertaining and international diplomacy,” Conger wrote, describing how he undertook to transform the space into a tribute to American craftsmanship and cultural heritage.

Conger’s team brought together a collection of objects and furnishings dating from early American history, from 1740 under the British Empire, through the 1776 Revolution to 1830.

Some belonged to supporters of the fledgling republic, including some to the Founding Fathers of the United States, others to loyalists to the Crown. Some have diplomatic significance, others are simply a tribute to the skilled artisans of the era.

The Treaty of Paris Desk is seen inside of the John Quincy Adams State Drawing Room at the State Department on May 24, 2016 in Washington, DC. The Treaty of Paris, which ended the Revolutionary War, was signed on the desk in 1783. / AFP / MANDEL NGAN / TO GO WITH AFP STORY BY ELODIE MAZEIN (Photo credit should read MANDEL NGAN/AFP/Getty Images)

Thus, in pride of place, visitors can find the desk on which was signed the 1783 Treaty of Paris that brought to an end the Revolutionary War in which the United States won independence from Britain.

Nearby, sits an unfinished sketch for a painting which ought to have commemorated this moment: The five US negotiators, including Benjamin Franklin, are already finished, but the British representative refused to pose for the artist.

Marcee Craighill, current curator of the Diplomatic Reception Rooms, beams with pride as she explains how this work will soon grace the halls of a French royal palace as part of a temporary exhibition: “Versailles and American Independence.”

The refurbishment was paid for by private donations in cash and kind, Craighill says, and today the art and artefacts have an estimated value of $125 million.

But that is without counting the architectural decor, which allows today’s diplomats and statesmen to discuss world affairs against a backdrop of moldings and ceilings based on famous stately homes.

Part of the area forms a reproduction of Thomas Jefferson’s mansion in Monticello, Virginia, just south of the US capital, and others use marble and hardwood floorings recovered from historic buildings.

The grandest chamber, the Benjamin Franklin State Dining Room, has a 21 foot (6.4 meter) ceiling and a 98-foot floor rug that weighs 4,000 pounds, under a table that can sit 375 dignitaries.
“We wanted guests to have the impression of entering an 18th century American house,” Craighill said.—Relaxnews