The summer playground for the Fords, the Wrigleys, and Ernest Hemingway has a lot to offer.

The year-round locals are salt of the earth working people. Traditionally conservative in demeanor and beliefs, they live in the state’s north woods because they love hunting, fishing, skiing and (above all) privacy.

This is the region that helped forge Ernest Hemingway and that genius author’s devotion to everything hunting and fishing. Born in Oak Park, Ill. just outside Chicago, Hemingway would spend summers in Northern Michigan. After the young adult writer was wounded by mortar fire serving in WWI, he returned to the quiet forests and pristine lakes to recover physically and mentally. His short story, Big Two-Hearted River, features alter ego Nick Adams searching for similar solitude in the same environment after returning from war.

To this day, warmer weather brings tourists and snowbirds from all around the Midwest to their summer cabins, the local yacht clubs or golf resorts. Flush with disposable income and eager to enjoy lakeside life, these “fudgies” (a local nickname coined by Michigan’s top confectionary souvenir) fill up the seasonal properties the locals build and staff. 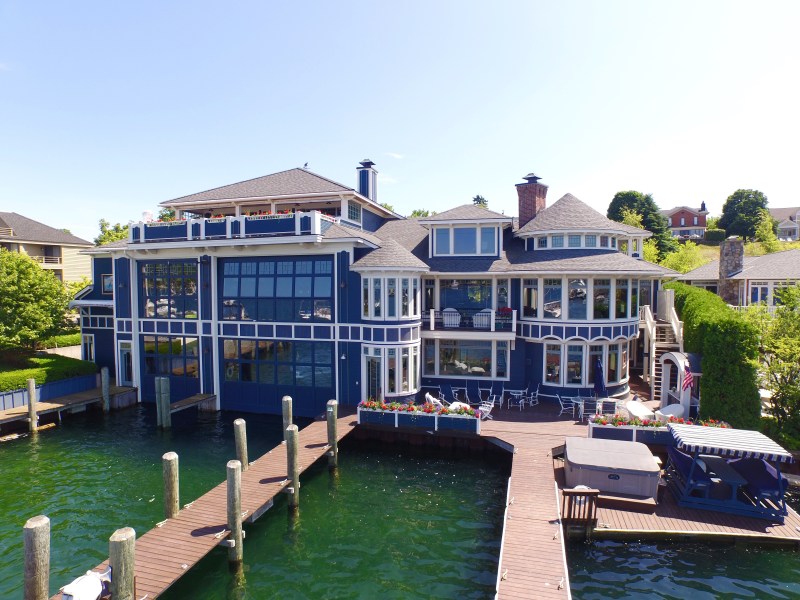 Today, there’s another influential group blending into the woods. These Lower Peninsula communities stretching through Traverse City in the south up to Mackinac Island where Lakes Michigan and Huron meet are evolving into the latest trendy targets of the international well-heeled. Wealthy captains of industry race showbiz and sports celebrities to build their estates on the area’s best stretches of waterfront property — and that’s changing the area’s character and demographics.

“This area has been popular with the wealthy for more than 100 years,” says local Steve Matthews. “But, the demand on the luxury end is very strong right now. It’s never been busier.”

Matthews is director of real estate and development for Boyne Resorts, one of the top American ski destinations outside Colorado. He explains Northern Michigan was always home to the summer escapes of the Fords, the Gambles and the Wrigleys because its green, attractive landscape offered them a convenient vacation venue easily reachable by boat or, eventually, by highway. But, today’s rich and famous leave a footprint around the Wolverine State’s lake country for a different reason.

“They can come up here and live somewhat anonymously,” Matthews says. “They can boat, fish, hunt, play golf, enjoy the local restaurants — and they won’t be recognized. They can do what they want when they want and not be bothered by the locals or the media.” 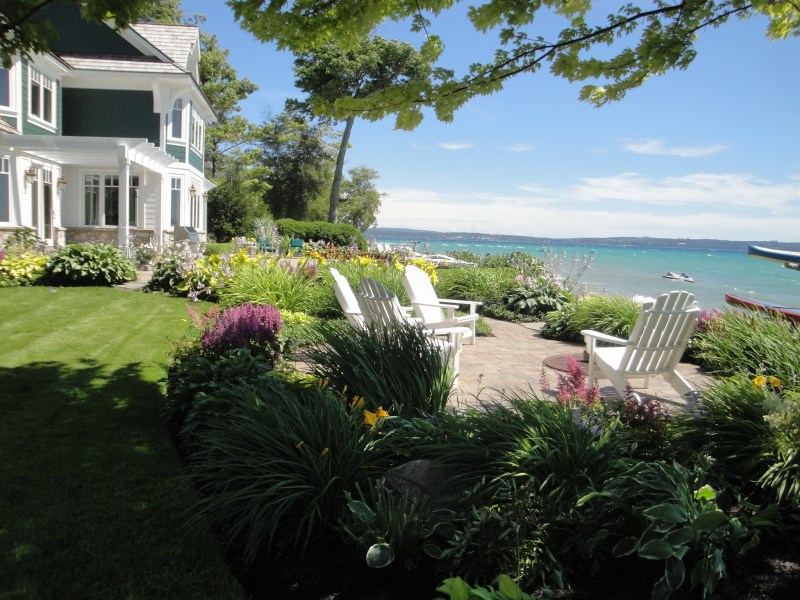 While the rest of the world still has its traditional wealthy enclaves from Monaco and Lake Como to West Palm Beach and Malibu, the Northern Michigan waterfront property comes at a distinct bargain and without the intrusive eyes of the media or groupies.

Though the state’s average citizen is too polite to go looking for them, Northern Michigan’s “not to be bothered” ranks include a mix of corporate leaders and celebs. The auto industry moguls now have to compete for the best real estate with the eclectic likes of Dave Matthews, Bob Seger, Don Shula and Madonna.

Names like that can drive a real estate market into hyperdrive — but Chris Etienne, an associate broker for Sotheby’s International Real Estate Harbor Springs, says even the highest housing prices in her area are bargains compared to more traditional wealthy hideaways like Aspen or Cape Cod.

“A $10 million house in a more established luxury community might sell for $3 million here,” Etienne says. “While we have home listings throughout this region with high-end prices up to $10 million, there are private estates being built up here valued significantly higher.”

Etienne adds a current trend sees big money scouting locations and choosing a preferred stretch of isolated lakefront property. The buyer will purchase any existing homes along the desired shore and knock them down before building a much larger estate. 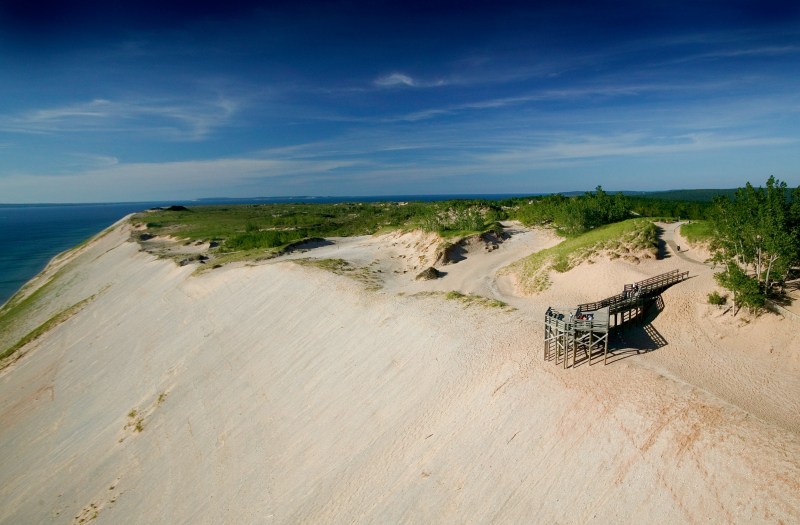 While the land along State Highway 31 is becoming a precious hidden gem for the deep pockets crowd, it’s unclear if the all-year residents are seeing a benefiting influx of revenue.

Carlin Smith, president of the Petoskey Regional Chamber of Commerce, welcomes the inrush of fresh-faced, high-end residents — but he’d also like to see his community think about the people who build, clean and supply the mega-mansions.

“We’re in a growth mode in Petoskey commercially and residentially,” Smith explains. “The market had a downturn in 2008, but it’s bounced back and became even more attractive now that big money found it. But, it’s staying more high-end.”

Though a resort economy presents Petoskey with challenges, Smith is excited that Northern Michigan is developing an international reputation.

“Word is getting out, and you can tell because it’s no longer just a Midwestern demographic mixing up here. We’re seeing more residents coming in from the U.K., Germany and elsewhere. Bay Harbor played a big part in casting a wider net.”

Bay Harbor is a high-end resort and private community filling a five-mile-long coastline stretch on Lake Michigan’s Little Traverse Bay. Situated just west of Petoskey, Bay Harbor opened 20 years ago and is still under development. When finished, it will include 32 separate neighborhoods fueled by its own elite shops, restaurants and services. 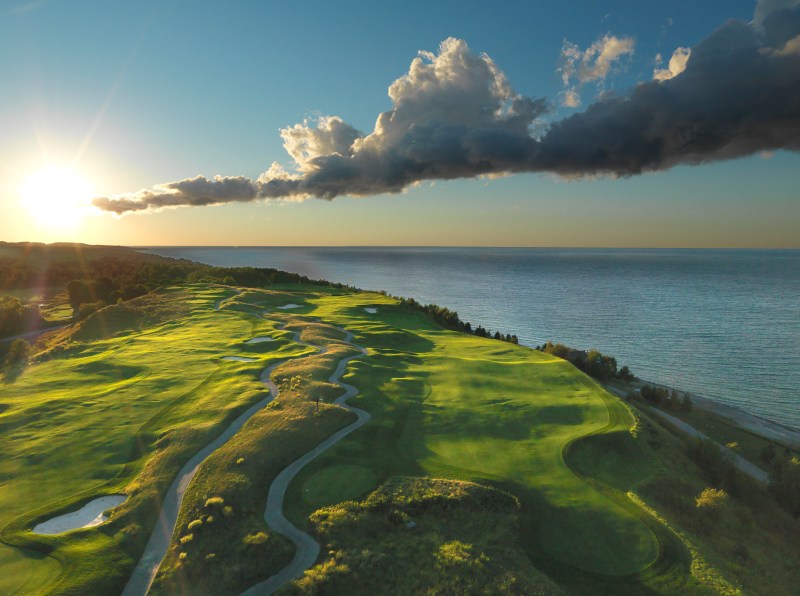 A perusal of Etienne’s Sotheby’s listings show several properties for sale in Bay Harbor, including an equestrian-themed estate for just south of $6 million and several shoreline estates waiting for buyers at around $3 million.

All of this new money unavoidably changes the makeup of a community. According to Liz Ahrens, executive director of the Crooked Tree Art Center – one of the cultural centers of the Traverse City and Petoskey areas — the more financially established these towns become, the older and more diverse its population grows.

“We are seeing a change as the wealthier residents who spend time up here are in their 50s or 60s and don’t transfer their families here or make this their permanent residence,” Ahrens says. “Their families are grown, and they own multiple homes around the world and fly in and out. We’re seeing a lot of private and corporate jets flying in and out of here every day.”

As for the celebrity crowd, Crooked Tree draws a lot of them to its wine tastings, exhibits and concerts — and Ahrens believes they flock to the area because it’s carefree for them.

“If you think about it, we have so many advantages over the traditional spots the wealthy prefer. We have hard winters, but no hurricanes or fires. We’re natural disaster proof, and we respect each other’s privacy. I think celebs and the like realize they can establish a home here and do nothing, if they want. They can stay in their homes on the water or wander off into the woods, and it’s OK.” 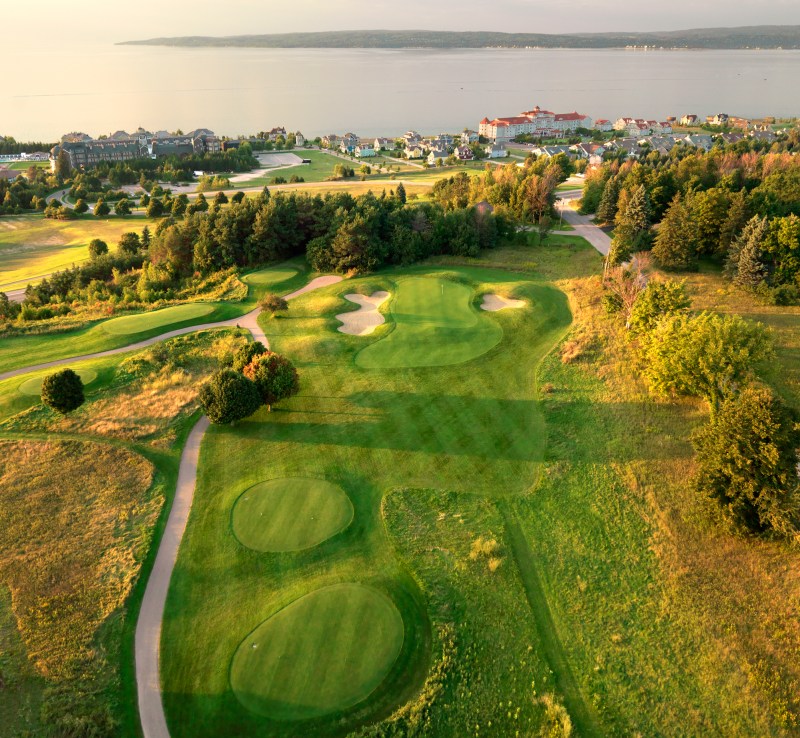 Legendary golfer Tom Watson was born in Missouri, but he spent the summers of his youth in Northern Michigan. The man who won 39 times on the PGA Tour, including eight Major Championships, began polishing his game on the quiet lake country courses. In fact, his family frequented Walloon Lake – the former fishing HQ for young Hemingway.

“Walloon, where I spent time in the summers with my family, will always be remembered for its quiet serenity,” Watson says. “I spent a good amount of time fishing alone or with my family there.”

Watson is still known to play the Belvedere Golf Club in Charlevoix – one of the neighborhood’s most famous and longer standing destinations and the home of the Michigan Amateur Golf Championship. But, he recalls simpler surrounds when he was learning the game.

“I used to play a little nine-hole golf course up there back then. It provided many wonderful memories from my youth — learning to enjoy the game I eventually came to play professionally.”

There might very well be the next PGA champion or Two Michelin Star chef growing up with lungs full of fresh air along the upper stretch of Lake Michigan as you read this, But, you’d never know it because this stretch of natural wonders keeps its secrets — up and coming or already established.

That’s why the well-to-do continue to stake their Northern Michigan claim in the wilds where paparazzi will forever fear to tread.