Ask A Cool Dad: Should I Care This Much About Baby Gear?

Plus: How do I talk to other parents? And can I drink with my college-aged kid?

By A Cool Dad

Technically, I am not yet A Cool Dad. Rather, I am a 33-year-old man expecting his first child and hoping to one day be A Cool Dad. As I prepare for the baby’s arrival, I find myself spending hours upon hours researching all the gear everyone says I need. Or at least just the stuff I could be seen using in public, like strollers and diaper bags. In the process, I’ve wound up having some insane thoughts like, “Oooh, only $1,200 for the stroller and the carseat! What a deal!” So my question for you is this: What’s really worth splurging on and what’s not?

First, a question for you. For everyone, really: Is it bad if the very first thing I ever write in my official capacity as A Cool Dad is a joke about how you become A Cool Dad at conception? Yes? OK then. We’ll save that for another time.

I distinctly recall that the first time I felt truly useful in the whole child-rearing process (er, aside from the first part, I guess) is when we had to start researching the items that would eventually make their way onto my wife’s baby registry. If there is one thing I enjoy more than buying stuff — or in this case, even better, having things bought for us — it’s spending an inordinate amount of time on the internet deciding what, exactly, to buy. And I went in deep on the baby stuff.

So I very much understand where you’re coming from, and while I can certainly see why someone might roll their eyes at it, I actually think it’s really sweet. There’s an inherent feeling of helplessness that comes into play when you’re an expectant father (and, if we’re being honest, it extends well into the newborn stage as well), so you find yourself doing whatever you can to appear as though you are actually contributing something. Whether it’s running out to buy whatever weird food your partner’s craving or doing your best to spruce up the nursery before the kid’s arrival, or learning everything there is to learn about strollers, it’s all part of getting yourself ready for your new life. So kudos on that.

But you’re also right to be wondering if it’s all one big waste of money. Strollers, especially, which have long been something of a status symbol, have gotten completely out of control. The last time my wife and I were in the market for one, we went with the very, very popular Uppa Baby Vista, the newest version of which will set you back $900. I remember insisting on it because I’m tall, and I argued that any lesser stroller was difficult for me to push? But I’m pretty sure I just liked that, at the time, it was less obviously bougie than something like a Bugaboo, but still fancy as hell. To be fair, it also lasted us through two children and a solid six years of use.

As with anything, it comes down to what your priorities are. Do you want the most versatile stroller out there? The lightest? The one that’ll make you the envy of all the other dads (OK, moms) at the playground? As you know from your research, there’s a stroller to meet each of those demands. It’s up to you to decide what’s most important. But I will say this: stroller technology isn’t moving quite so fast that you wouldn’t be fine saving a bit of coin on last year’s model.

And don’t bother with a diaper bag. Any old backpack will do just fine. Don’t forget the changing pads, though.

I’m lucky enough to work from home a few times a week, and when I do, I have to pick up my 6-year-old daughter from first grade. After school, the kids all go to the playground, where all the mothers stand around chatting. I never know if I should try to make conversation with them or just sit off to the side and mess around on my phone, which … is what I usually decide to do. My wife works full time, so she’s not around the school that much either, and I feel like one of us should probably try to be friends with these people, if only for the sake of my daughter?

I’ve been there, friend. Oh, how I’ve been there. And oh, how I too have spent most of my time there with my head buried in my phone. But it really is best to try and engage. I find that the easiest way to initiate conversation is to sit near whatever group seems like it has the most decent assortment of parents, and then wait for your kid to come running over to you, at which point she will probably say something hilarious or dumb. Then, when she runs away, you look over at the group of parents, try to make eye contact, and immediately either roll your eyes or shake your head and say something about how weird your kid is. I find that most parents, even the least Cool among us, appreciate humor that isn’t so much like, “Ooh, can you believe how adorable and smart she is?” but more like, “Jesus Christ, can you believe we made something so strange?”

My son is a senior in college, and we’re going to visit him for his last Parents Weekend. He lives in an off-campus house, and he keeps saying he wants us to come to a party they’re throwing that weekend. He and his friends are all 21, as far as I know, but still … is it weird for me to go to a college party and drink with my son?

What? How is this even a question? Of course it’s not weird for you to go to a college party and drink with your son! It’s, like, the very Coolest thing about being a Cool Dad. There are a few things to keep in mind, though. First, and most obvious, is that you shouldn’t get too drunk. No kid should have to suffer the indignity of having their friends find out their dad’s a lightweight. Second, don’t be too try-hardy. Wear your Coolest, most youthful clothes, but make absolutely sure you don’t push it too far. Like, maybe forego the bred-toe Jordan 1s and opt instead for a nice, clean pair of Air Max 1s.

Have parenting questions of your own? Send them to cooldad@insidehook.com, and I’ll do my best to help you out. 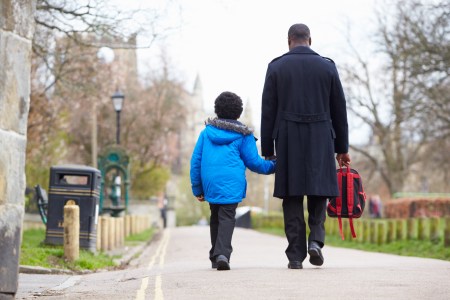 What the Hell Is “Dad Brain”? Is It a Good Thing?