A Foodie's Guide to Dubai

BROUGHT TO YOU BY EMIRATES AIRLINE

Calling Dubai “diverse” is akin to calling it “big” — technically true, but doesn’t really do the place justice.

For just as the litany of cloud-scratching structures and man-made islands fly in the face of traditional notions regarding what man is capable of building, so too is the entire city — and its culinary scene in particular — a fantastic crossroads for cultures from around the globe.

Our recent breakneck adventure through the Golden City with celebrity chef Ludo Lefebvre and our friends at Emirates Airline put said diversity into sharp relief, proving that an enterprising foodie can begin the day subbing a traditional Bedouin crêpe with egg for their breakfast burrito, enjoy Argentinian roast goat for lunch and close out the day with British-Mediterranean grub from a Michelin-starred chef for dinner.

Not only could, but should, in fact. Below: a brief tutorial on how you too can get the job done — and perhaps grab a quick helicopter ride in the process.

And don’t forget where the journey starts: by flying Emirates.

Dining With the Fishes: Al Mahara

Al Mahara translates to “the oyster shell” in Arabic — fitting both in terms of the cuisine (high-end seafood) and the setting (a 700,000-gallon aquarium filled with all manner of marine life, mahara presumably included). Come for the French influences of Alain Ducasse-trained chef Renald Epie (foie gras ravioli with your Alaskan King Crab, sir?), stay for the fact that watching sharks and moray eels cruise past your table is about the chillest way to enjoy a meal, regardless of who cooked it. “Almost like you’re in a submarine!” exclaimed a wide-eyed Ludo. “Pretty cool.”

Michelin-star recipient Jason Atherton’s new “deformalised fine dining” resto overlooking (you guessed it) Dubai’s stunning marina features a menu that strikes the perfect balance between London comfort and Mediterranean pizzazz. Dishes are meant to be shared in every sense of the word — hence the “Social” — with standouts like a seemingly innocuous Italian beef tomato that reveals a center of gooey burrata when sliced open designed for consumption both on the table and on Instagram. The killer wine selection and postprandial trolleys dishing out everything from digestives to cigars are just the kicker. Think of it this way: any British joint that can make a convert of our French chef has gotta be worth your time.

Tucked away in an unassuming strip mall in Old Dubai, culinary adventurers will find an unbelievably friendly and welcoming crew serving up their eponymous Iraqi specialty: massive river fish imported straight from the Tigris and slow-roasted over an open pit fire visible through a massive window in the restaurant’s dining room. The result is an unbelievably moist and crispy delicacy served whole to the table with all manner of Middle Eastern accoutrement and best shared by a group with an appetite. Ludo tip: “Ask for the amazing black lime drink.”

Digs Fit for a King: The Palace Hotel

Yes, the Palace boasts suites bedecked with intricate woodwork, marble bathrooms and thread counts higher than the Burj Khalifa. Yes, it has a spa with treatments befitting, well, Middle Eastern royalty. Yes, a casual stroll around its arch and palm-filled grounds evokes a deep desire to burst into “A Whole New World.”

But the real reason to stay at the Palace, in our opinion, is the opportunity to dine at a veritable murderer’s row of top-shelf restaurants where stunning views of the Dubai fountain and the towering Burj almost — not quite, but almost — eclipse elevated takes on cuisines from around the globe.

As an intro to Arab cuisine, it’d be tough to top Ewaan — Ludo had hands-on training whipping up their delectable selection of mezzeh (that’s Arabic for small plates) made from the freshest ingredients and a collection of “Excuse me, but can you please tell me what this flavor is?” spices. The heavy hitter: their “moutabel,” a smoky, creamy purée of grilled eggplant with sesame and fresh pomegranate seeds. You will be putting this stuff in jars in your suitcase, trust.

Another tenet of Dubai’s culinary scene? Imported toques lending their own brand of comestible tomfoolery to the local fare. To wit: the comfy-rustic Asado, where the Argentinian chef is roasting whole goats “asado” — that is, basted with chimichurri and splayed over an open flame for 4+ hours. In Ludo’s words, “the smell really sets the tone of the food.” Request a table on the patio, order said goat with a bottle (or two) of Malbec, and toast your excellent decision with the fountain show and twinkling lights of the Burj as your backdrop. 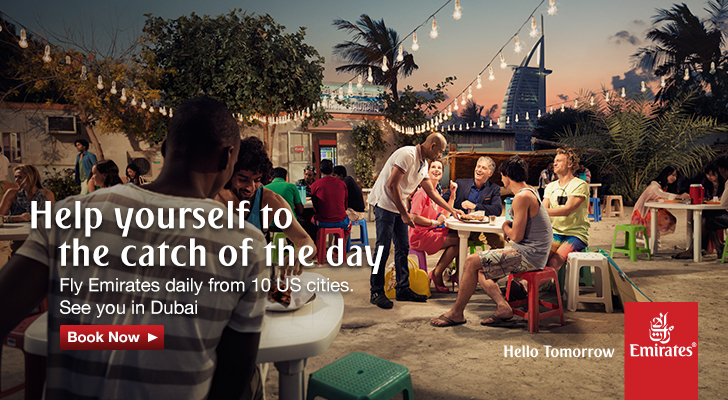 Into the Desert: Platinum Safaris

If there is one thing a true culinary wanderer should not miss when visiting Dubai, a safari trip across the dunes to dine with the Bedouins would be it. Rocketing across the dunes in a vintage, open-topped Land Rover, it would be easy to mistake the Dubai Desert Conservation Reserve for Tattooine, with its roaming herds of ivory Arabian antelopes standing in for Storm Troopers.

The traditional Bedouin camp is an enclosed oasis of color and texture set against the sandy landscape, where camels (not French-speaking, much to Ludo’s chagrin) ferry visitors about the surrounding terrain and friendly hosts proffer piping hot Arab coffee and traditional Bedouin “crêpes” cooked over an open flame. The nearby hunting falcons dine on raw quail, so no sharing required.

Back to the Basics: Old Dubai

It’s worth taking a detour from Dubai’s more glossy locales for the simple fact that Old Dubai is so damn vibrant — from locals and tourists alike smiling and waving to each other from the Abra water taxis shooting back and forth across Dubai creek to the abundance of exotic smells and friendly haggling of the spice souk, Dubai’s historic district feels alive in the best possible way.

Best way to survey what you’ve seen (or plan to) in Dubai? From a couple thousand feet directly above it. No other vantage point quite captures the sheer magnitude of the place — from its districts of high-rises stretching into the sky, to its archipelagos of man-made islands dotted with luxury hotels and the type of homes where a mega-yacht parked out front seems downright natural. 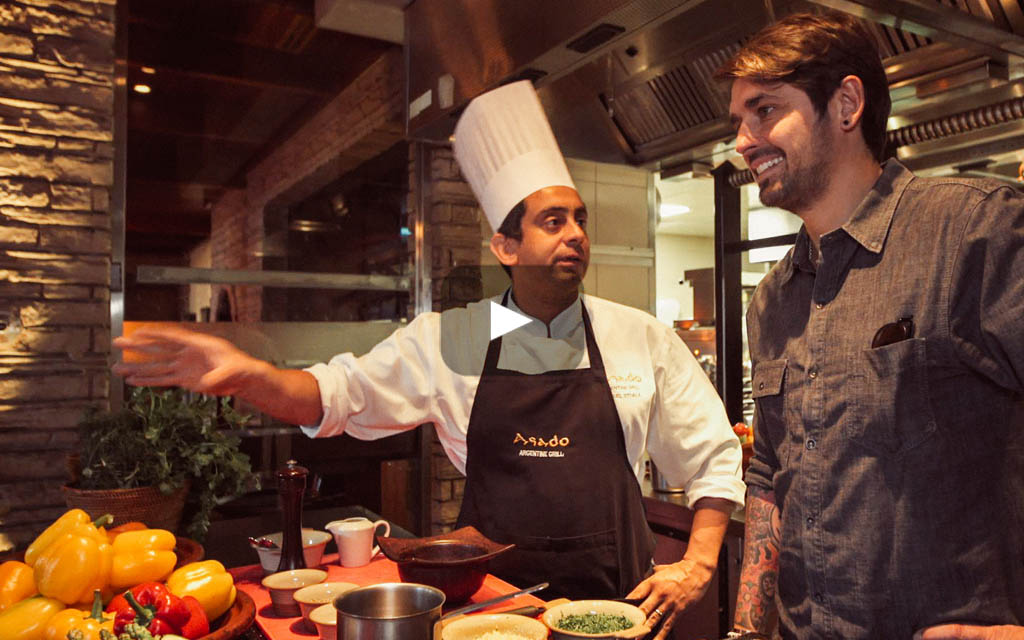 IN PARTNERSHIP WITH EMIRATES AIRLINE

Chef Ludo Lefebvre calls his cuisine “French with an international flavor.” Meaning: the man has gotten around, and so have his recipes. So we strapped him into an Emirates Airline A380, armed ourselves with some video cameras and a sense of adventure, and ate our way through one of the world’s greatest strongholds of culinary diversity: Dubai.