A week after possibly ending his NFL career with a 31-14 loss to the Cowboys in the wild-card round in front of a national audience on Monday Night Football, Tom Brady made his regular appearance on his weekly Let’s Go! podcast with longtime friend Jim Gray.

Gray, who routinely lobs softball questions Brady’s way that may have been pre-approved by the 45-year-old quarterback, seemingly got under the skin of the future free agent with a question about whether he had a timetable for making a decision about what he wants to do next, if anything, in his football career.

Asked about whether he intends to be playing in the NFL in the 2023 season, Brady cursed at his longtime broadcast partner. “If I knew what I was going to fucking do, I would’ve already fucking done it. I’m taking it a day at a time,” Brady responded, per The Tampa Bay Times. Told by Gray that he sounded antagonized by “the question everybody wants to hear,” Brady kept it brief. “I appreciate you asking. Thank you,” he said.

That ended the discussion between Gray and Brady about the latter’s possible retirement, but expect a national conversation about where the seven-time Super Bowl winner is going to head next to continue until, and likely after, he signs with a new team or announces his second retirement. There’s also certainly still a chance Brady could stay in Tampa Bay with the Bucs, but that possibility seems remote at best given how this season went in Florida. 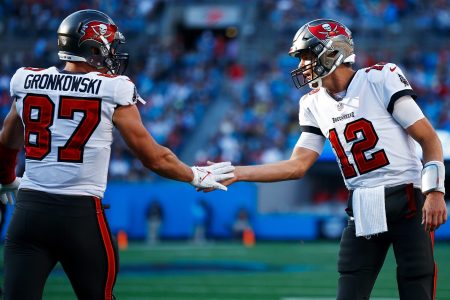 Rob Gronkowski Is Talking About Tom Brady Returning to the Patriots

As for what Brady is up to while he decides what’s next, he said he is spending time with his children and attempting to “decompress” from the rigors of an NFL season that saw him miss more practice time than ever before and even skip a Saturday walk-through after attending the wedding of New England owner Robert Kraft the night before in New York.

“There’s a lot of things you put off during football season,” he said. “Coach [Bill] Belichick always had a great analogy. He said, ‘Put it in the drawer.’ And finally, you open that drawer at the end of the season and you realize all the things you put in that drawer so it takes you a few weeks to dig your way out of it.”

Until Brady is finished digging and announces what he has found in the drawer, he should be prepared for questions from Gray and other members of the media about what his plans are for 2023 and beyond.

With New England expected to announce the return of Bill O’Brien as offensive coordinator, speculation about Brady returning to the Patriots has already begun in earnest. (Brady curses…O’Brien curses…)

“Billy is a straight shooter,” Brady said of O’Brien in the past. “Sometimes you might not always like what he says, but you respect it because his goal is the same thing that yours is, to get the best out of the team. I really enjoyed my time with him.”

If that time resumes, expect the internet to explode.