Did Philadelphia Make a $154 Million Mistake With Carson Wentz?

Wentz, 26, has been pretty pedestrian for the 5-6 Eagles this season 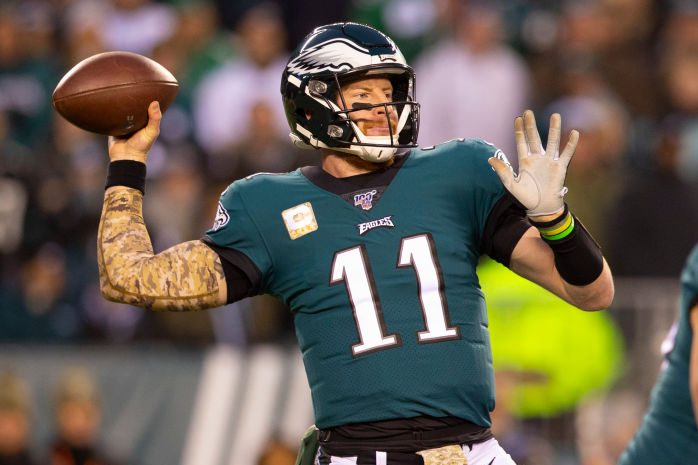 In June, the Philadelphia Eagles signed quarterback Carson Wentz to a $154 million contract extension that will keep him in with the team until 2024 and included $107 million in guaranteed money.

Obviously, it was a significant decision for an organization that won the Super Bowl just the season before with Wentz’s since-departed backup, Nick Foles, under center.

The jury is still out but, based on the way the 26-year-old has been playing this year, it may have been a mistake.

Through 11 games this season, Wentz has thrown 17 touchdowns compared to six interceptions and led the Eagles to a 5-6 record which currently has them outside of the playoffs looking in.

During Sunday’s loss to the Seahawks, Wentz completed 33-of-45 passes for 256 yards and one touchdown, but also had two interceptions and two fumbles. Even worse, the 256 yards were actually a five-week high for Wentz.

Philadelphia has played a tough schedule thus far which is partially to blame for their poor record, but Wentz’s play has also been an issue.

“Wentz has struggled in areas that are within his control,” according to FiveThirtyEight. “A major complaint has been his apparent unwillingness to take quick, short completions to open receivers. He’s frequently chosen to look past easy short-yardage plays and ended up with forced incompletions or worse, sacks.”

Things should get better this week when the Eagles take on the Dolphins and Miami’s bottom-tier defense, but it is fair to be concerned about Wentz’s future as a top quarterback given how much money Philadelphia has invested in him.

“Defenses have worked to limit some of his strengths at the same time the Eagles have pulled back on the amount the QB uses his legs in the name of career longevity,” according to ESPN. “It’s on the coaching staff to come up with a counterpunch and find ways to use his greatest strengths while not overexposing him to harm. And it’s on Wentz to correct some of these bad tendencies, such as fumbles and holding onto the ball too long, which should no longer be an issue in Year 4.”