Collector Miles Spencer Nadal shelled out $437,500 for the kicks

A pair of Nikes Moon Shoes were sold to a collector for a record price. (Sotheby's)
By Evan Bleier @itishowitis

Days after buying 99 out of 100 pairs of sneakers being offered up at auction from New York-based consignment shop Stadium Goods’ famed “Trophy Case,” collector Miles Spencer Nadal finished off the set by snagging the last remaining pair.

The kicks that Nadal paid the record sum for were a pair of Nike’s “Moon Shoes.” Made completely by hand for runners at the 1972 Olympic Trials, the shoe was designed by Nike co-founder and legendary Oregon University track coach Bill Bowerman.

So named because the mark the shoe’s waffle sole makes on the ground is similar to the tracks left on the moon by astronauts in 1969, the Moon Shoe does not say “Nike” anywhere on it, but does feature the brand’s signature Swoosh. It’s believed that fewer than 15 pairs of the Moon Shoes were ever made, and Nadal’s pair is the only one that exists in unworn condition.

This 1972 Nike Waffle Racing Flat ‘Moon Shoe’ sold today for $437,500, setting a new world auction record for any pair of #sneakers. Offered in collaboration with @StadiumGoods, this historic shoe was a highlight of a now 100% sold selection of #footwear from their famed Trophy Case. Other highlights included the most exclusive and coveted sneakers ever produced by Nike, Air Jordan, Adidas, Yeezy and more, spanning over 15 years of the most sought-after, limited edition drops in sneaker history. #SothebysStadiumGoods #Nike #MoonShoe

After winning the auction, Nadal expressed how over the moon he is about his purchase.

“I am thrilled to acquire the iconic Nike ‘Moon Shoes,’ one of the rarest pairs of sneakers ever produced, and a true historical artifact in sports history and pop culture,” Nadal said. “When I initially acquired the 99 other pairs in this auction last week, I just knew the Nike’s had to remain part of this remarkable collection, and I couldn’t be happier with the result. I think sneaker culture and collecting is on the verge of a breakout moment.” 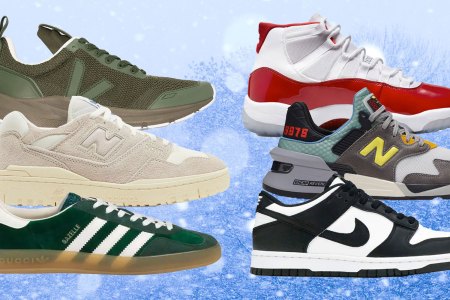