Kids Inherited Smartphones. Now They’re Getting Rid of Them.

Teens are fantasizing about bringing a hammer to their screens. We don't blame them.
Getty Images/Cavan Images RF
By Tanner Garrity @tannergarrity

Two quotes for your consideration:

That first one is courtesy of Hugo Hamilton, a celebrated Irish writer. The second is a paraphrasing of a desire I’ve heard friends and family express intermittently over the years…whenever afflicted with a sudden and overwhelming revulsion for their smartphones.

Hamilton wasn’t riffing on the iPhone 14 in that excerpt from The Sailor in the Wardrobe, but things less tangible and more classical: one’s identity, one’s history, one’s birthmarks. And yet — for younger generations, especially, inheriting a phone has become as inevitable and inalienable as inheriting a name.

According to a study from Stanford Medicine researchers, 25% of children own smartphones by their 10th birthday. That shoots up to 75% before their 13th birthday. And by 15, everyone (a negligible percentage below 100%) has a buzzy rectangle in their pocket. 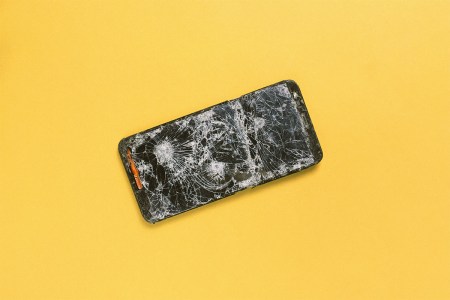 I stuffed my phone in a drawer for 72 hours. Here's what happened.

Unsurprisingly, smartphones’ easy and unceasing access to social media is one massive reason why. Childhood has always been less innocent than we give it credit for, but with an arena of piss-poor social cues and rampant insecurities at their fingertips, what chance do tomorrow’s kids even have of “growing up and becoming innocent”? How they possibly earn their innocence?

For some, according to a recent profile in The New York Times, the “Luddite life” is the only way forward. The piece follows a band of teens who meet in Brooklyn’s Prospect Park on moody Sunday mornings, in order to read Dostoevsky or sketch in journals while sitting amongst leaves. They’re a modern Dead Poets Society, by way of the outer boroughs, only their unifying rebellion isn’t necessarily against “the man,” but the machines the man thrust in their faces…just as they were just starting to see the world.

Some of the teens among the Luddite Club ranks still have smartphones. Others have flip phones, in order to mollify their concerned parents. (It’s a big city, after all.) None of them use their phones during their meetings, though, and most report a growing disconnect from the online world, compounding the impact of their weekly covens. The youths report feeling like they’ve finally started “using their brains”; they’ve found it easier to manage friendships; they’ve jumped headfirst into new pursuits and hobbies; they’ve started making it home for dinner.

It isn’t this simple, obviously. There’s a reason the Luddite Club has had trouble adding members, and that the trend is revolutionary enough it gleaned a spread in the nation’s biggest paper. For many, this represents a dramatic, and ultimately unrealistic, repudiation of Gen Z’s inheritance. As satisfying as it is to opt out of an “extremely online” generation, deleting Instagram once and for all, how about Maps? Mail? Slack? Uber? Spotify? How about knowing the weather? Or…Googling something?

Brokering with a parent is one thing — but what about explaining your Luddite philosophy to a future partner? Or an employer? Or even just a freshman roommate in college, who’s confused why you can’t or won’t Venmo them for your share of the toilet paper? There is philosophical merit to debating the worth in these tools’ existence…but you can’t exactly debate their existence.

There is now a thriving supply of “distraction software” available online, intended to limit one’s interaction with certain apps, or with a smartphone entirely. The appeal of these programs is understandable, particularly coming out of the pandemic, when we all stared at screens for 18 months straight. Little wonder that flip phones have been making a comeback for years now, too, across a number of age groups, or that the Light Phone (a minimalist device with no social media) has won legions of supporters.

But fascinatingly, the Light Phone has started to look more like…a phone, with each edition the brand releases. The latest drop, Light promises, will have “navigation, ridesharing, and much more coming down the pike.”

This isn’t the teens’ fault. They deserved better. Perhaps they can truly cast off their phones, and will ultimately find new ways to connect and get around and live their lives unburdened by these things that somehow became elemental to the human experience in the span of 15 years. (I was gratified to read in the Times profile that the club’s founder has fantasized about “tossing her iPhone into the Gowanus Canal.”)

And even if they can’t, even if it’s all doomed — how special, that at 17, they cared enough to look up and around, at birds and at trees, earning their innocence, if even for just a few weeks.