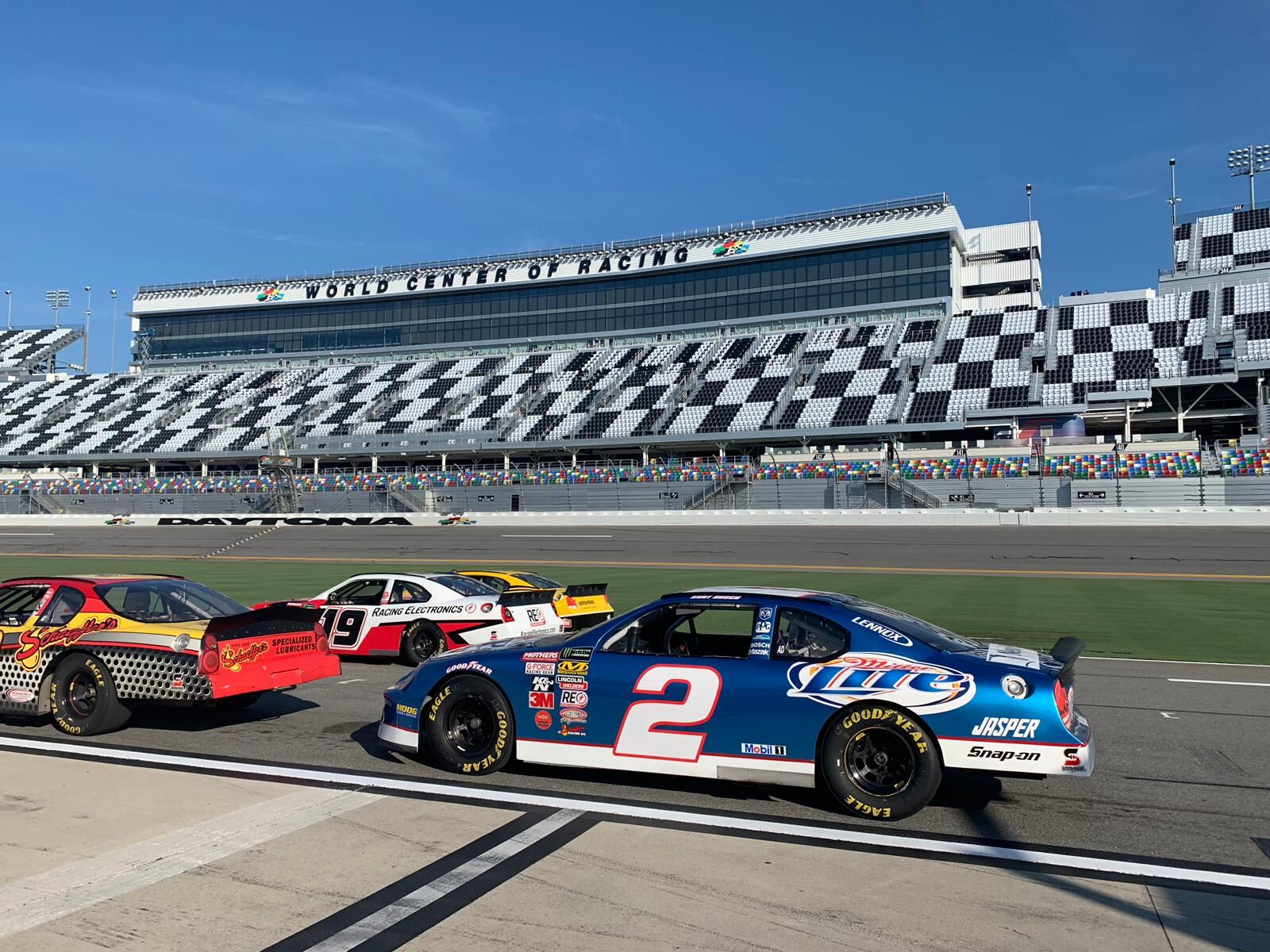 I’m sitting in the driver’s seat of a bright blue race car, emblazoned with the number 2 on its side, parked in one of the places I was very unlikely to be found: the pit road of the Daytona International Speedway. I’m decked out in a flame resistant suit (under which I am wearing a t-shirt and homemade denim shorts —not exactly what drivers usually wear in the blazing heat of the race track), I’m attached to the seat by a metal harness strapped to my shoulders, and the only thing louder than the puttering of the engine and the occasional whirl of a car passing by at over 150 miles per hour is the sound of a man’s voice in my ear. It’s my spotter, whose name was certainly told to me even though I cannot for the life of me remember it.

I’m usually pretty good with names, unless I am introduced to someone in a particularly stressful situation. And it’s fair to say that I’m right in the middle of one. In a few moments, the Ford Fusion I’m sitting in will be pushed by a crew of guys while I slam the gas pedal down to the floor, hoping to make it up to 4,000 RPMs by the time I made it to the end of the road and onto the Daytona track. It’s all happening extremely quickly: I am about to drive a race car faster than any other vehicle I’ve ever manned before. And I’ll be doing it alone, with only the help of my suddenly nameless spotter calling out to me over the radio in order to cheer me on and, more importantly, make sure I don’t crash this car before I complete a few laps on the track.

I really had no idea what I was in for when I accepted the offer to drive a race car as part of a visit to Daytona Beach to celebrate the grand opening of The Daytona, a new boutique hotel just a short drive from the speedway (one imagines it’d take merely a minute or two if stock cars were street legal, but I traveled to the track from the hotel via a shuttle). While the beach town might be best known as a spring break destination, it’s also the home of NASCAR. Born out of the Prohibition era, when bootleggers sped their cars down South loaded up with moonshine, stock car drivers started out by racing their cars on the beach in Daytona where you can now drive your own vehicle (much slower at ten miles per hour). About five miles from the ocean is the home of what might be the most famous raceway in the world. The Daytona embraces that history; race cars and motorbikes litter the lobby (one must walk around the car Dale Earnhardt Jr. drove in his final race to get to the front desk), and the famed British racing enthusiast Malcolm Campbell is the namesake of the restaurant, Sir Malcolm. The name of the hotel bar, The Blue Flame, is a nod to the preparation of moonshine; the no-longer-illegal spirit is the focus of the venue’s cocktail menu.

As I sit in the race car, sweating from the heat and my own nervousness, I listen to the voices of the pit guys on the radio and the buzzing of the other cars on the track. As if my life is flashing before my eyes, I instantly see myself as a teenager in my childhood home, the same sounds blaring from the stereo system in the living room. In the late ‘90s, when the sport achieved mainstream success and became a national past time and boasted plenty of celebrity drivers (Dale Earnhardt was a messianic figure around our house), it became my dad’s favorite sport. I, on the other hand, didn’t see the appeal of watching grown men drive in a loop for hours at a time, and I would ignore any effort my dad made to get me on board. “All they’re doing is turning left,” I’d complain, scoffing at the idea of the drivers being athletes. I wasn’t into sports at all (I preferred watching movies to any game on TV), but I couldn’t see what was so impressive about driving a car extremely fast.

That is, of course, before today. Before I would do it myself. Even prior to arriving at the raceway this morning, I was sure my own driving experience wouldn’t be too exciting. Surely someone would be riding with me, maybe with their own controls on the passenger side of the seat like in Driver’s Ed. I imagined I would get to floor the car for a short stretch before slamming on the breaks. No way did I think they’d let me take off on my own, to speed around the track for eight laps with just a hope and a prayer along for the ride.

And yet, here I am, locked into a race car by myself, trying to remember everything I learned in the short training video hosted by Richard Petty that I watched before I climbed into the driver’s seat. The car is shaking, and so am I, and while sweat collects on my forehead (and, to be honest, every part of my body — a fire suit is not exactly cool), I have a silly thought. My dad, who died of cancer a decade ago, might be watching over me? I’m not particularly spiritual, but once I realized I’d be cruising solo, part of me imagined (and hoped!) my father would be riding along with me, which is both a comforting thought and the premise of a very corny country song. Would he be impressed? (I’d like to think so!) Jealous? (Absolutely.) Scoffing at my inability to drive a manual transmission, a skill I never thought I would really need to know until this morning, when a very nice man with a deeper Virginia accent than I asked me if I knew how to drive a four-speed? (I was caught so off guard that I am sure I said “lol” out loud, suddenly replacing nervous laughter with nervous Internet speak.)

Since I am driving a stick shift for the first time on the Daytona International Speedway track, the guys in this tourist-friendly pit crew are nice enough to push the car for me as I rev the engine. Before I drive off, however, I ask one last question through the netting in lieu of a window. Richard Petty said in the video that I’d need to keep the left tire of my car about five feet above the double yellow line; that line separates the track from the apron (the flat surface in the middle of the oval), and drifting close to it could lead me to swerve off the track and wreck the car — especially when I hit the second and third turns, which are elevated at a 31-degree angle.

“How do I know if I’ve five feet above the yellow line?” I ask.

The nice man who shoved me in the window gave me a bit of a shrug. “You’re going to have to eyeball it,” he replies.

I’m suddenly glad that my eyeballs are in good condition, and that this stranger has so much faith in me. As I hear a countdown in my head from my friendly spotter, I remind myself that this is something that anyone with a driver’s license can do the NASCAR driving experience costs $599.99), and that I have never heard of any amateur race car drivers crashing their cars at Daytona. While there’s a first time for everything, I decide that I’m not going to be that guy. (I mean, do I even really have a choice?)

With my foot on the gas, I peel out of pit road and onto the track, with my spotter guiding me to rev the engine up to 4,000 RPMs. My hands are practically glued to the wheel (10 and 2, just like Driver’s Ed), and my eyeball is doing a lot of work to keep the tire the correct distance from the yellow line. I quickly approach the first turn, then the second (which is actually more terrifying), and once I’m on the first straight stretch, I’m calm enough to realize that I have in fact been saying “Oh shit, oh shit, oh shit” to myself, loud enough that I can actually hear my own voice over the violent sounds of engine, tire, and wind. My spotter calls for me to check in, and I do — I mutter a hurried “10-4” over the mic, hoping I can just cruise along without speaking as I’m trying to focus everything I’ve got on staying alive. I have to assume my speed climbs as I approach — and then break — 5,000 RPMs, although I have no concept of speed anymore. Physics have flown out the window, because I’m simply flying around in a circle, turning left (which is a lot harder than I thought), unaware of how long I’ve been in this hot car until I approach the end of the eighth lap.

If you think that driving a race car that fast is scary, then you really ought to try slowing down a race car. It’s terrifying. All I had to do, really, was take my foot off the gas and let the car coast a bit. I follow my spotter’s instructions to glide across the double line on my left, pressing my foot down on the break with a lot of effort after I clear the fourth and final turn. I’m once again on the pit road, watching the crew flag me down and instruct me where to park the car. By the time someone comes by to pull back the net, unhook me from the seat, and remove the steering wheel, I finally realize that it’s all over. Eight laps, roughly eight minutes; it felt like eight seconds and eight hours.

My body shakes for ten minutes after I get out of the car and collect my certificate, which shows I drove the car at 145.01 miles per hour — much better than I usually do on the 101 in my Hyundai Ioniq, but about 50 miles per hour less than racers get up to. And while I concede it was exciting, as if I got to drive the rollercoaster instead of simply sitting in it, I’m already feeling hungover from all that adrenaline. Later, back at The Daytona, I’ll take my first shot of moonshine. I’ve earned it.