The Quiet, Timeless Appeal of a Hamptons Weekend in Winter

Among tiny inns and empty museums, you'll find a place that feels immune to the passage of time

Although I lived in Southampton when I was a graduate student and still love being on the east end of Long Island, I visit now only in the winter months. That’s not to say baking white-sand beaches and late-night village strolls are not wonderful — it’s just that endless snaking traffic on Montauk Highway, seasonal pricing and ubiquitous tension between locals and ‘city people’ ruins it for me in the more crowded, warmer months. I’m talking about bumper stickers with slogans like:

Summer people
Some are not

Most of my friends who vacation on the East End just roll their eyes and laugh, but having grown up in the United Kingdom, I have little tolerance for the class war, which defined certain elements of my childhood, and, in my opinion, is largely responsible for the Brexit turmoil.

Winter, however, weaves a different kind of web. It’s cold, yes. And if you choose to visit during a polar vortex, you will suffer. But average temperatures between December and late-April are rather temperate. The major museums are all open, it’s free to park at the beaches and restaurants like Sant Ambroeus and The Palm at the Huntting Inn stay open year-round.

For my most recent journey to the East End, I picked up a Lexus RX350 F Sport (courtesy of Lexus), which is a mid-size SUV that exemplifies the luxury typical of the company, but with a bit more muscle and interior features like real bucket seats. The plan was to spend the next 30 hours in the most relaxing, memorable way — a real weekend break.

Our vehicle swallowed the mileage effortlessly and drank so little gas for a 3.5-liter V6 engine, I wondered if the RX350 F Sport wasn’t some kind of hybrid. Although this is a journey I have taken hundreds of times, a compass projected in the HUD (head-up display) was more interesting than simply have one’s speed projected, which has become de rigueur in luxury vehicles. It took just under two hours to arrive at our hotel for the night, the 1770 House on Main Street in East Hampton. This boutique Inn popular with visiting celebrities was actually built in the 1660s (30 years before the Salem witch trials), but didn’t start to receive paying visitors until a century later. Each of the six guest rooms and a two-story carriage house are fitted with Frette linens, Molton Brown amenities, snacks from North Fork chips and Tate’s cookies, and other accoutrements typical of a luxury hotel.

The house has retained much of its colonial-era charm, with narrow staircases, exposed beams, oil paintings, ticking clocks and working fireplaces in almost every room. Its most appealing quality, however, is the warmth of the innkeeper, Randye, whose friendliness was apparent weeks before our arrival, when I called to pay the deposit. I also emailed in advance about my wife’s food allergies. The day of our arrival, Randye went out personally and bought several food items at a health food store, at no extra charge to us. As for the room, it was seasonally cozy and well-appointed with suede armchairs and floral wallpaper reminiscent of William Morris. Bad lighting, in my opinion, is an American epidemic, and so it was a relief to find our night’s lodging illuminated by table lamps, bedside wall-sconces and a push-button, gas-operated “log fire.” Charming, but also safe and smoke-less.

Randye admittedly loves East Hampton in the colder months. “The stores and restaurants that are open are the ones you want to go to, [and] that you might not have tried in the summer. The Historical Society and Guild Hall are open, the beach is empty and yes, it can be cold, which means you can ice skate at the pond (if it’s cold enough) or at a local rink and then cozy up by a fire or in your room away from the distractions of home. You can even get into a movie without having to plan ahead.”

One of my goals for the weekend was to transport my wife and daughter back in time by visiting period village houses maintained by East Hampton Historical Society. The first two museums on my agenda were a 10-minute walk from our hotel, and only several hundred yards apart from one another.

The “Home Sweet Home” saltbox house (built in the early 1700s) is decorated as it would have been in the past, and our 30-minute tour with museum manager Hugh King evoked a sense of what it must have been like to live in the Hamptons hundreds of years ago. More than the artifacts, it was really the experience with Mr. King that made visiting this colonial house worth it — especially when he got side-tracked and waxed lyrical on East End shipwrecks, 17th century tobacco pipes, ceremonial swords and English pottery. Being the only visitors (winter hours are by appointment), our experience was enhanced by gray winter light and gusting wind at the tiny, tempered windowpanes. The entire experience was like when you open an old book and take a whiff of wood smoke, leather, tobacco and hay.

Across Main Street is another East Hampton Historical Society property, the Thomas and Mary Nimmo Moran House. Built in 1884, this quirky, Queen-Anne style art studio was the home of Mary Nimmo Moran and Thomas Moran — both accomplished painters of the 19th century. Our tour with historian and curator Richard Barons was well worth it, as he went into great detail not only about the house and its famous residents, but about regular life in the 18th and 19th centuries. Mr. Barons is a wealth of knowledge, and can explain why Main Street was wider than a four-lane road (even before the invention of motorcars), or how in the past, squirrels were often domesticated by children and cherished as family pets.

It was dark as we crunched up the driveway back to Main Street. Towering elm and maple trees swayed and creaked in the cold wind. Less than a mile away, Atlantic waves pounded the beach. We could taste salt in the air. To maintain the Dickensian ambiance, we decided to eat supper at one of East Hampton’s oldest and most famous restaurants: the Palm at the Huntting Inn. It was built in 1699 for the Reverend Nathaniel Huntting, his wife, and the 10 children they would eventually have. During the Revolutionary war, the Huntting Inn was a pub, and apparently the only neutral territory for British and American soldiers, who would drown their differences with tankards of flip: a popular mix of sugar, eggs, nutmeg or cinnamon and rum or whiskey, all plopped into ale, which was then heated with a red-hot poker.

Although the Palm is a chain-restaurant (there’s even one at JFK), long-time general manager Andrew Tobin knows regulars on a first-name basis, and his sincere, welcoming demeanor has made this steakhouse popular with both locals and moneyed summer visitors — miraculously maintaining its reputation as neutral ground. In addition to the restaurant, there is a lounge (with log-burning fire) and bar area with wooden booths. The atmosphere is friendly and jovial — not the place for quiet, romantic supper, but welcome respite during the cold, dark winter months, when the East Hamptons feel desolate.

One of the benefits of being in the Hamptons in winter is how beach parking rules are either not in effect or not enforced. And so a few hours after our steak dinner, nearing midnight, my daughter and I climbed into our borrowed SUV and drove south toward the ocean. Randye had told us earlier it was the perfect time to see stars.

It might have been the unlit, frosty beach roads, but our Lexus seemed to have a different personality at night. The under-glowing buttons and graphics-heavy console made for a more futuristic experience than any other SUV I’ve tested recently, but thankfully subdued enough so as not to distract from the road. With the heated seats and steering wheel on full power, Lexus’s famously smooth ride was like gliding on a warm cushion. The panoramic moon roof (which encompasses most of the vehicle’s ceiling) seemed to have been designed exactly for this sort of night, and offered a miraculous view into space. At about 1 A.M. (after spotting dozens of deer), we eventually found a beach with only one small bulb at the entrance. We parked and walked about a mile down the cold sand in darkness to where our view was unobstructed by the electric light in the parking lot. Another benefit of being in the Hamptons is that one feels perfectly safe on a deserted beach in the middle of the night, even if it’s to ponder the whereabouts of aliens.

The next morning, after a long breakfast with the Sunday papers, smoked salmon, bagels, omelets, potato latkes and yet another log fire, we drove half-an-hour to the Montauk cliffs overlooking Turtle Cove. The beach was again deserted, and as the tide was going out, we noticed clear rock pools and scores of barnacles glistening on the rocks. We walked for about an hour beneath the cry of sea birds, watching for the small heads of seals which occasionally broke the surface of the water beyond the lapping waves.

After a quick stop for coffee, we left Camp Hero, hugged Innkeeper Randye goodbye back in East Hampton, and continued on to Southampton, where our final destination was the Parrish Art Museum. Set on 14 acres of meadow, the building was designed to enhance the living environment while providing a modern and completely unembellished way for people to look at art. One thing we liked about this museum, was how the aesthetic experience began in the parking lot. Everything from the walkways to the streetlights had been purposefully created to enhance the visitor’s experience. Inside the museum, the galleries were spacious and designed to allow the East End’s famous natural light to pour in. We spent about an hour in the Parrish — enough time to see current exhibitions and take in permanent pieces from the likes of Alex Katz, Chuck Close and William Merritt Chase.

Our trip concluded with an afternoon stroll around Southampton village and a late lunch at Sant Ambroeus, where in winter, one can just walk in without a reservation and be seated for a meal. We got back to the city exactly 32 hours after departing, but with the sense we’d been away a lot longer — and seen things both rare and wonderful. It was one of those uncommon perfect weekends that you don’t expect to happen when it’s freezing outside. 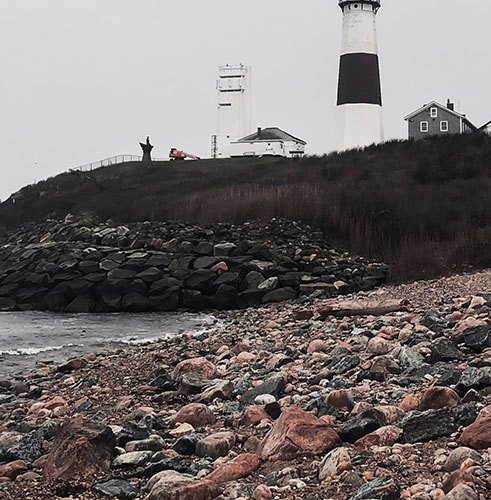 The 20 Best American Hotels to Visit for the Holidays in 2020
Revisiting the P-47 Thunderbolt, the Plane That Helped Win World War II