Swim with Humpbacks and Whale Sharks in Australia 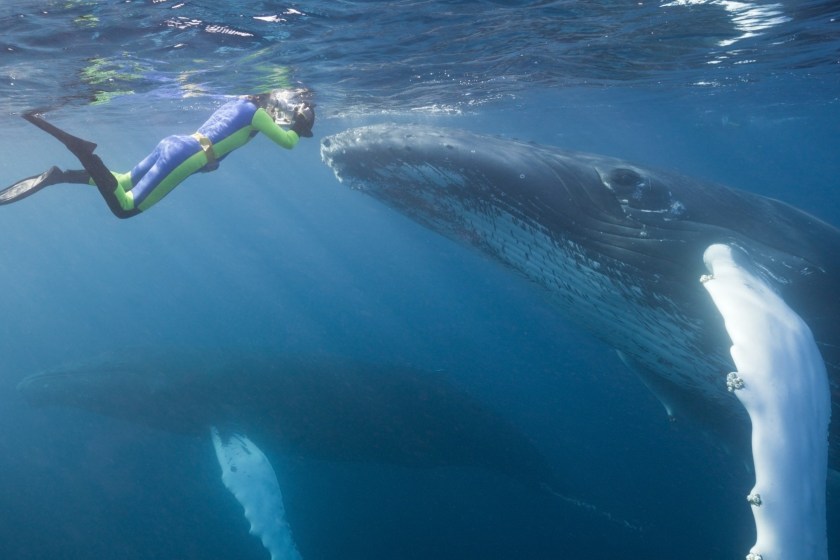 Ningaloo has long been the adventure-inclined traveler’s secret. Located in Australia’s northwest corner, the secluded peninsula entices both by land and sea. The sun-burnt gorges and serene waterfalls in Karinijini National Park provide ample hiking chances. Ningaloo Reef, one of the world’s largest reefs close enough to shore for exploration without a boat, is now one of the few places in the world to offer swimming tours with humpback whales.

This is a unique phenomenon for the region: such tours are typically only available in places like the Dominican Republic and Tonga. Swimming with humpbacks is the best way to see them since they don’t surface all that often, meaning a whale watching tour is marked by brief sightings at best. Humpback whales’ rare surface-level appearances typically only happen once every 15 minutes, but some whales can dive for as long as 30 minutes at a depth of 700 feet. 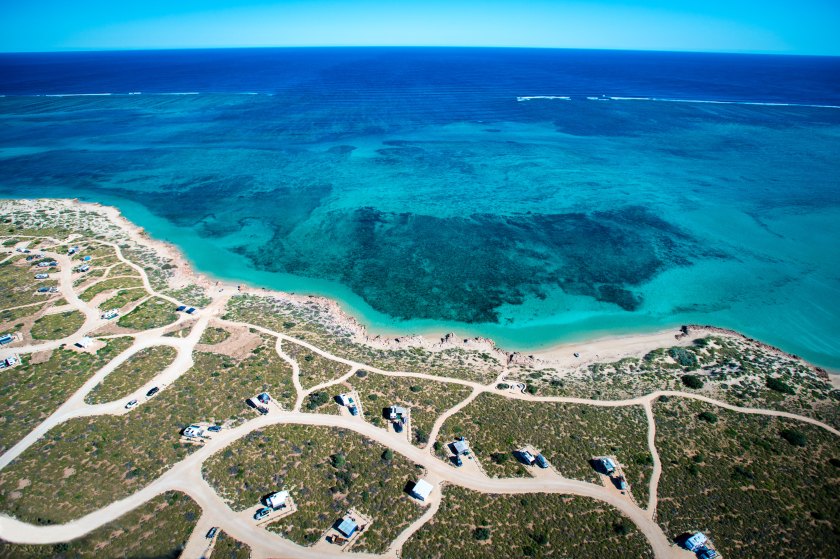 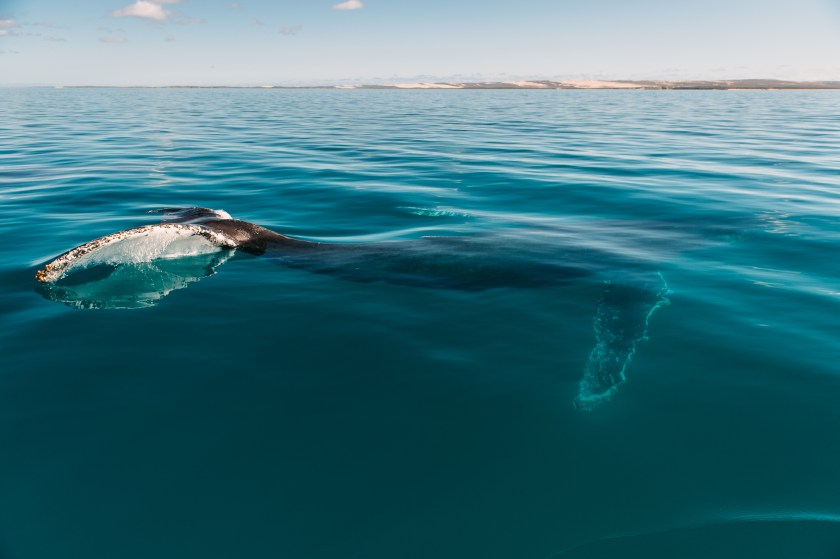 Home to the world’s largest population of humpback whales (30,000), local wildlife authorities started allowing swimming tours with them for the first time in August–just when they arrive at the marine reserves in Exmouth and Coral Bays to give birth. Because of this, there are some rules. Only five swimmers are allowed with a whale at one time–while implemented for safety, the rule has the benefit of allowing for a more intimate encounter. (In addition, swimmers aren’t allowed near mothers or their calves.)

Prices vary among the 11 tour companies, but they average around $200. The tours are part of a trail through the end of November, but 200 people booked a spot in the first week so it may not be wise to wait. Happily, the waters around Ningaloo are home to more than just humpbacks. 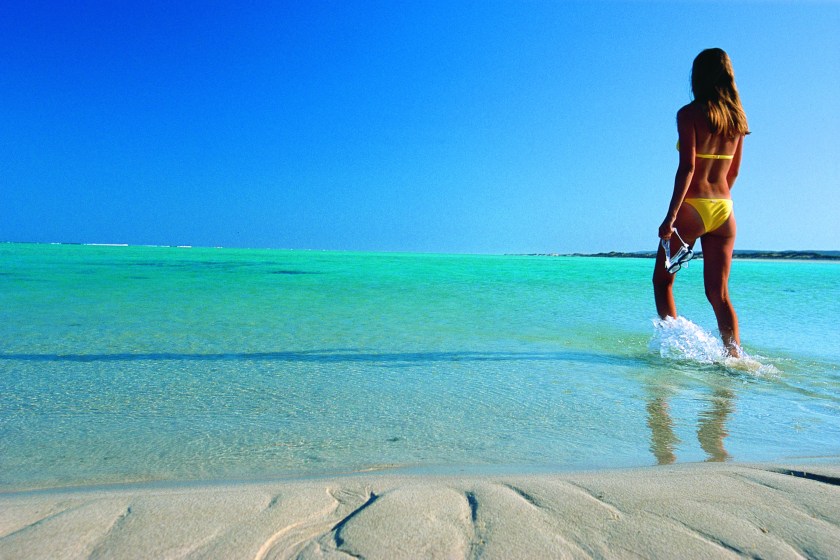 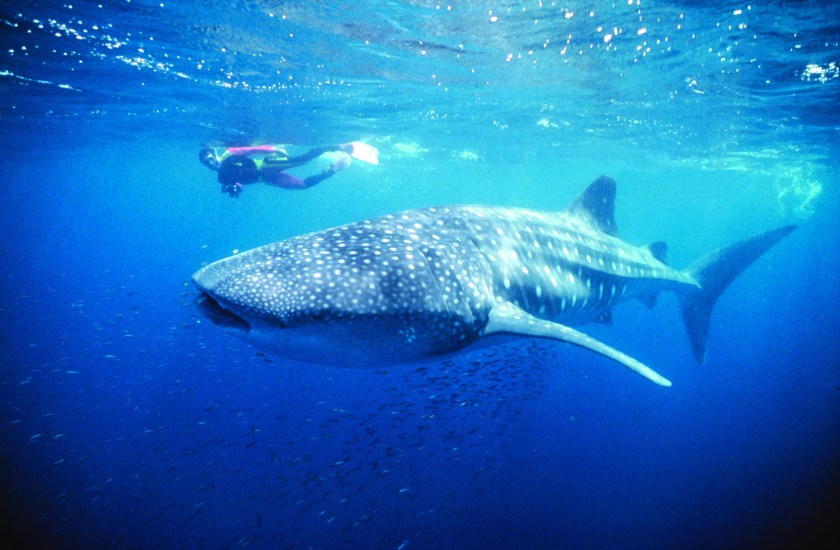 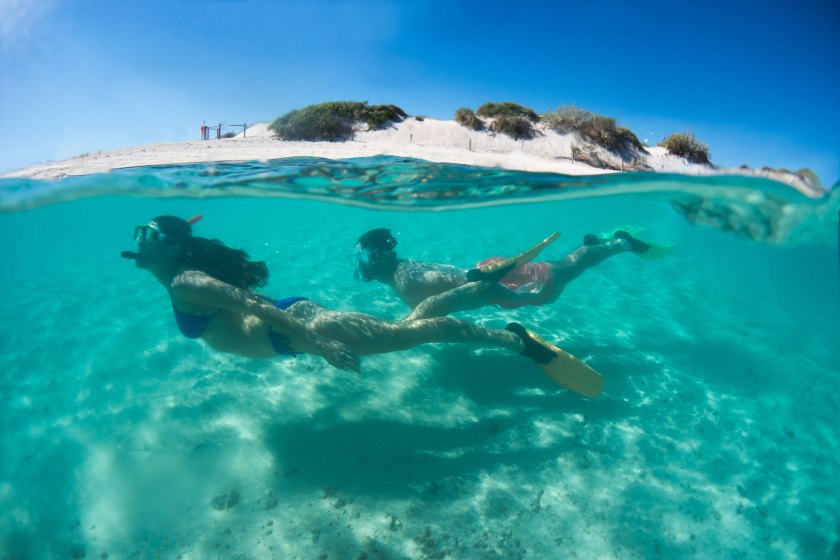 Boasting some of the country’s best marine parks, Australia’s Coral Coast–a stretch of pristine coastline that includes Ningaloo–is home to uninterrupted stretches of white sandy beaches and untouched coral reefs. Whether you’re looking to scuba dive or snorkel or kayak, there’s plenty of marine life to experience. Aside from humpbacks, you can swim at Ningaloo with the world’s largest fish, the whale shark.

In nearby Shark Bay Marine Park, you’ll find the world’s second largest manatee population as well as manta rays, sea turtles, and dolphins. You can also take a break from the marine life with a camel trek along the water’s edge. 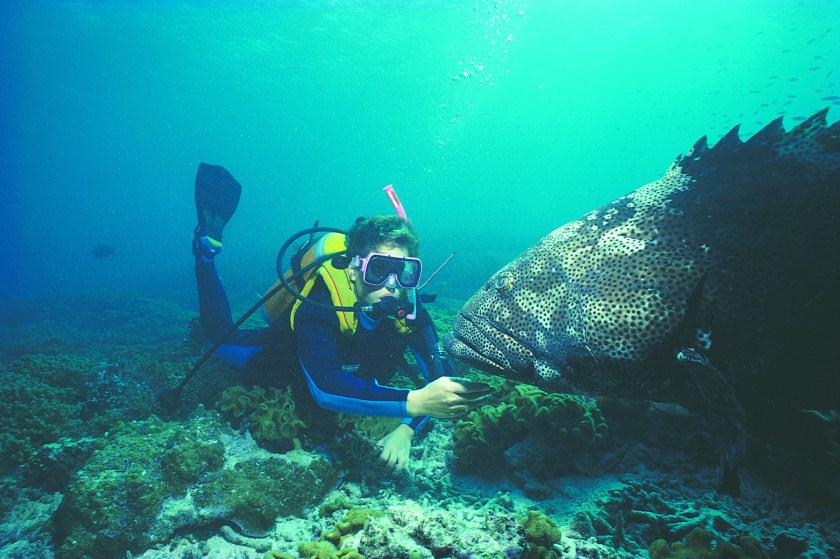 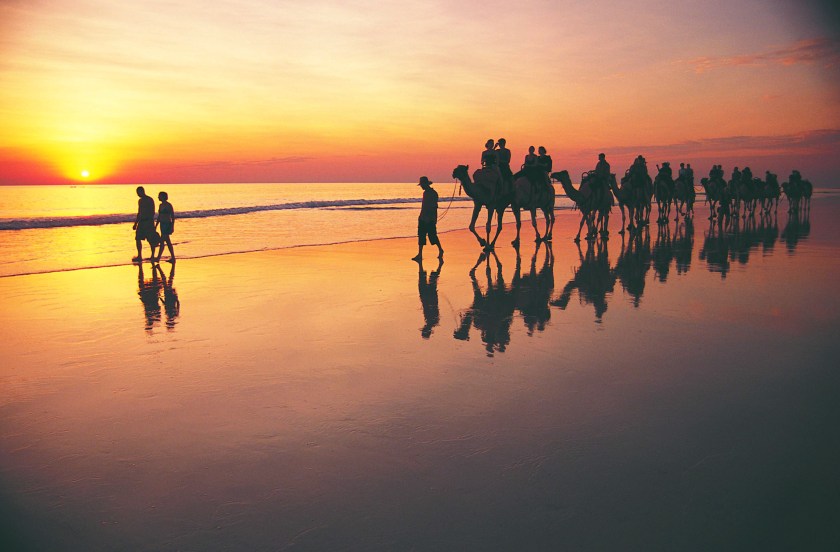 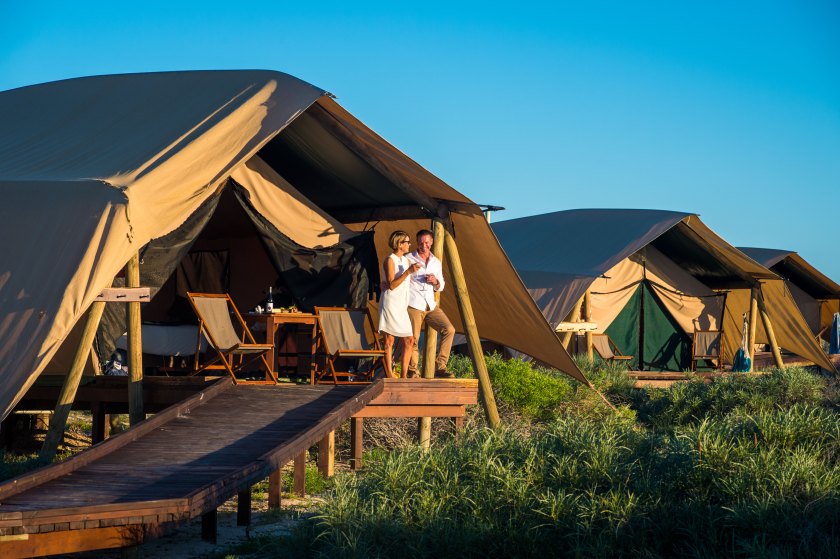 Luxury beach-side accommodations await whatever your activity of choice. Overlooking Ningaloo Reef, Sal Salis is an award-winning wilderness camp located in Cape Range National Park. Due to the stunning location, your adventure begins at with the walk to the camp. No vehicles are allowed in the park and most evenings kangaroos are seen around the camp. 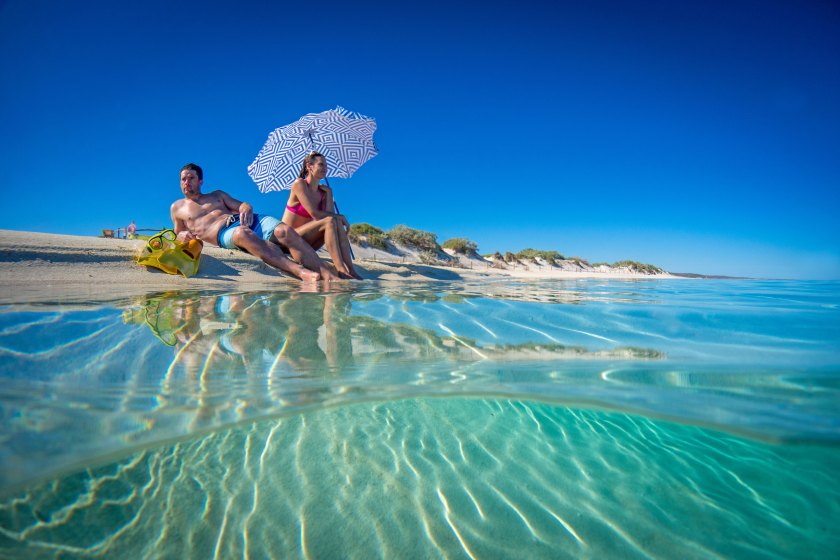 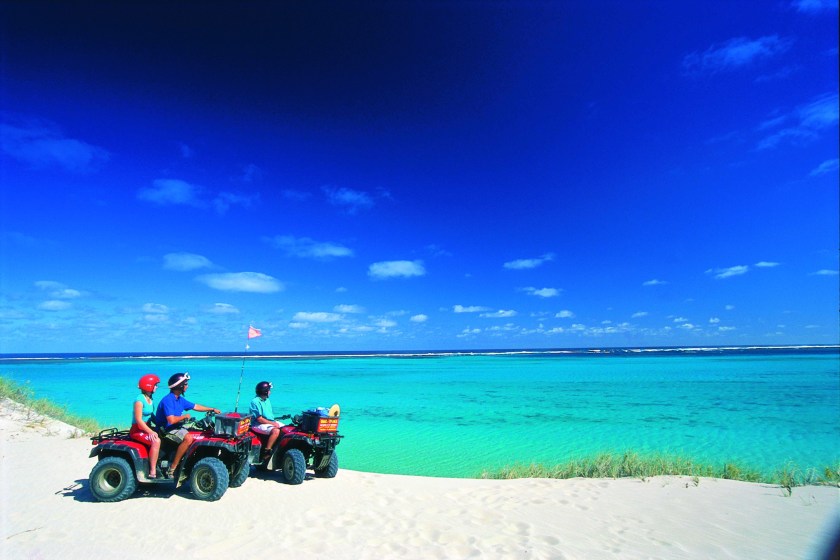 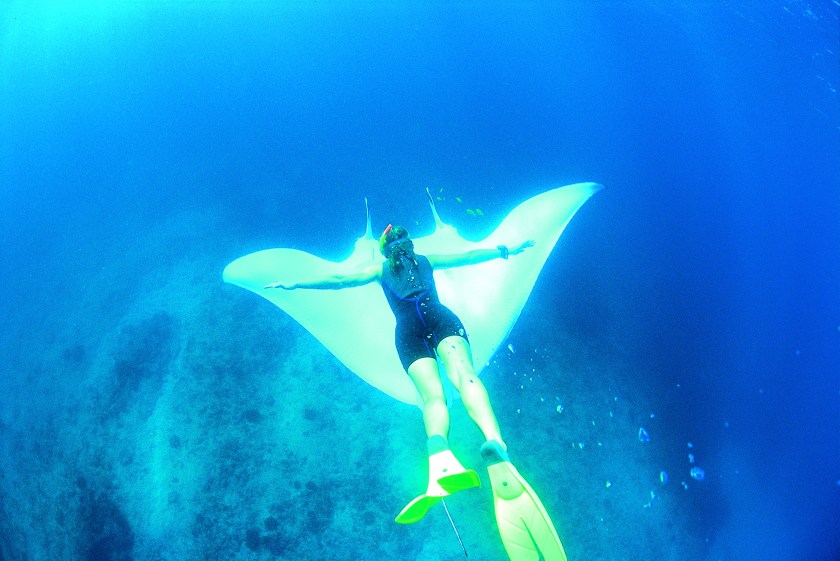 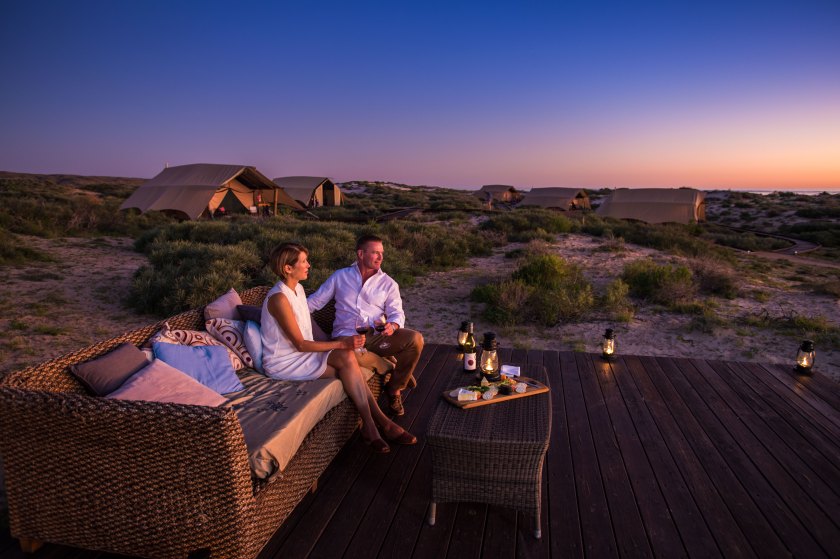 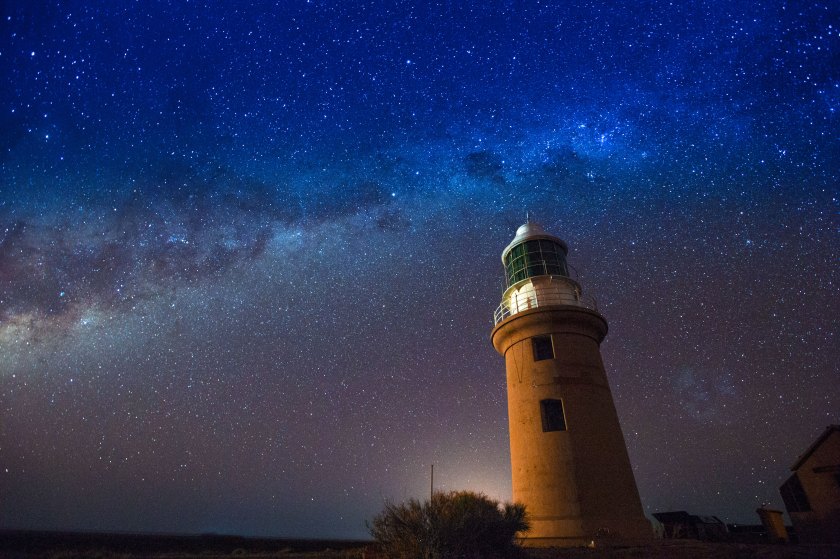