At Kahea Hart's gym in Oahu, breathwork, balance and teaching the body to avoid injury are king 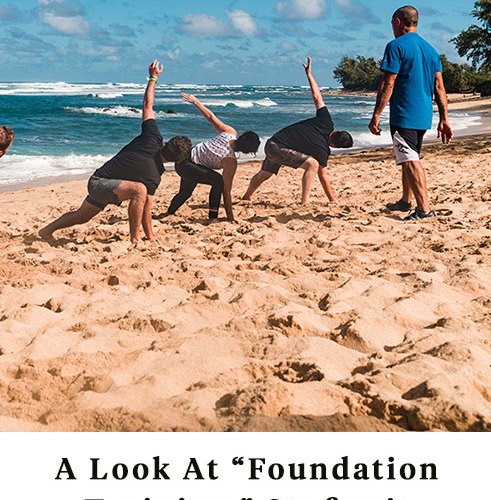 “Surfing, to begin with, was not a ‘sport.’ It was a ‘path.’ And the more you poured into it, the more you got back from it.”

I’m reminded of this quote from William Finnegan’s Barbarian Days as I enter Kahea Hart’s gym on Oahu’s North Shore. It’s attached to his house at the crest of a hilly side street two miles from the fabled Banzai Pipeline. Out back, wild chickens bonk heads and a pair of goats — Red and Blue — do passable impressions of people who’ve just stubbed their toes. Behind it all, the last foothills of the Jurassic-green Koʻolau Range point north, toward Alaska.

Kahea references these mountains moments after our class gets situated on yoga mats around the gym: “Why do we exercise? To feel good? To look good? No. To move. My ancestors grew up not far from here. When they needed to cross those mountains, they didn’t hop in a car and sit in traffic. They walked.”

We begin a round of intense breathing. In through the nose, hold, hold, hold, out through the mouth. Kahea encourages us to let the breath lift our ribs, to have it fill our shoulders, to establish a powerful rhythm that will almost certainly feel alien and uncomfortable.

As we fall into line, inhaling and aahing, he paces around the rubber tiles and tells his story: How he made it from Sandy Beach on Oahu’s southeastern shore to a professional contract on the North Shore. How he’d cross-train to prepare for winters in Hawaii. How, in 1998, he tore his ACL surfing Pipeline’s right-peeling Backdoor. And how he met a LA-based surfer, boxer and trainer named Rob Garcia who’d whipped everyone from Kahlani Robb to Oscar De La Hoya into shape. After his surgery, Kahea surfed for five more years, won the Faith Sunset Pro, and became a coach on Hurley’s junior team.

He checks in on us. Our faces are tingling. We’ve been breathing like survivors in a disaster movie for almost seven minutes.

“You’re hyper-oxygenating your system right now.” Kahea explains that we’re performing a system of breathing perfected by big-wave legend Laird Hamilton. It shares similarities with the superhuman-calming properties of the Wim Hof method. It’s easy and predictable to brand the practice as new age-y, but there’s nothing revolutionary about leveraging breath-work to improve CO2 tolerance, calm the mind and encourage movement mechanics. As a screen-stressed society, we just haven’t done it in a while.

Related: Can Wim Hof’s “Deep Breathing” Turn You Into a Super-Athlete?

But surfers have thought extensively about this sort of thing. Laird Hamilton famously adopted the Polynesian practice of carrying heavy stones underwater to improve his, and according to Kahea, all surfers should value it as much as their time in the water. His studio, the North Shore Surf Clinic, doesn’t just coach the merits of an efficient “pop-up” — he also extolls the benefits of “Foundation Training,” or low-impact exercises geared toward flexibility, core strength and balance that help surfers prevent injury and handle menacing meccas like Pipeline.

Before surfing was a sport, before the Slaters and John Johns and Volcoms and Hurleys, before the tours and the titles, it was indeed a “path,” to return to that quote from Barbarian Days. Finnegan also wrote that “when you surf, as I then understood it, you live and breathe waves. You always know what the surf is doing. You cut school, lose jobs, lose girlfriends, if it’s good.”

But for some, the playground-refuge elements of surfing inevitably morph into something bigger: professional contracts, endorsement deals, world tours. This earns them a career, but also invites a lot of mental and physical stress. And the only way that surfers can retain the young, wide-eyed love that got them into the sport in the first place is to train like capital-A Athletes — to prepare their muscles, brain and cardiovascular system for the violence of big waves, shallow reefs and contorting their body in a single direction for years on end.

Foundation Training is designed to help them achieve that. One of its best tenets: “Giraffes don’t need treadmills.” In other words, humans are the only animal that consciously works out, that counts steps, that spends large sums of money for the right to enter expensive gyms that ultimately just teach us to mimic the same movements our ancestors practiced in the course of their normal daily lives.

Kahea puts us through a round of Foundation Training after the breathwork, explaining that young surfers use the techniques and posture-correcting moves taught here — hinge at the hips, not the knees; harness isometric energy by clenching your feet against the ground, with your fingers in space — to strengthen their spines and recover from injury. (In the first room of the house, just off Kahea’s gym, a surfer’s who’s taken a tumble at Pipeline is resting on the couch. He’ll begin months of Foundation Training soon, to help restore his back.)

Kahea then leads a series of lunges and hip movements. We flex our necks, keeping our chins in, and he recounts seeing a pair of teens hunched over their phones at the beach a few days earlier. Yes, even Hawaii is suffering from the vertebrae-destroying tech neck. The point: there’s lifestyle functionality to these moves — they’re not just for surfers. Targeting muscles in the abdomen and lower back help bolster the posterior chain and facilitate better breathing. They make you better at performing everyday tasks, at moving through the world as a human being. And unsurprisingly, they’re hard. Annoyed, I watch during a scissor lunge as my front knee tries to jailbreak forward. It’s used to pushing past my toes, to holding most of the load. As a runner, that’s no-go.

Related: Learning to “Elongate” Your Body Is the Solution to Tech Neck

We pick up medicine balls and walk barefoot down the pavement to the beach, where Kahea puts us through dynamic warm-ups and Ginastica Natural Training. Conecieved by a Portuguese professor, it’s a bastardized style of jiu–jitsu movements, where one creates a flow with the legs: push the right leg back, push the left leg into a right angle in front of the body, reverse, repeat, add a hop-up element, etc. You feel a bit like an insect writhing around on the sand like that, but it creates a challenging mind-muscle flow, similar to some of the work Chris Hemsworth’s trainer pal Da Rulk is championing at the moment: Get on the ground, move around. As kids, we crab-walk, we bear-crawl. We strut around like gorillas. These movements encourage creative sources of flexibility and generate power in places that are long abandoned.

Finally, with a knowing smile, Kahea introduces us to our final circuit. It involves chucking medicine balls at the sand, 10 times in a row, jumping in the ocean to swim 25 meters, running back, then performing it all again. Three times. I’m a salty, heaving mess by the end of it.

For some of his young surfers, we’re informed, that’s a light day.