Ania Boniecka and Tyler Stalman make a living off the beaten path.

When I first hear Ania Boniecka’s voice on the other end of the line she’s out of breath. “One second!” she says in between laughs. “We’re just getting off of a swing, in the middle of the mountains.”

Traveling the globe two-thirds of the year, Ania and Tyler Stalman capture killer shots for clients but know how to enjoy life along the way.

A professional model for 14 years, Boniecka hated the lack of control over anything happening on set. Then she met and teamed up with Tyler, a  photographer. Unlike other travel bloggers who mostly chase the most popular geotags, they gravitate to places people aren’t obsessing over on social media.

“I’m just tired of seeing the same sh*t everywhere [on Instagram],” Boniecka says. Her dream trip? Visiting every ghost town in the Southwest.

From Canada to Croatia, this travel blogging duo reveals some of their favorite hidden gems around the world. 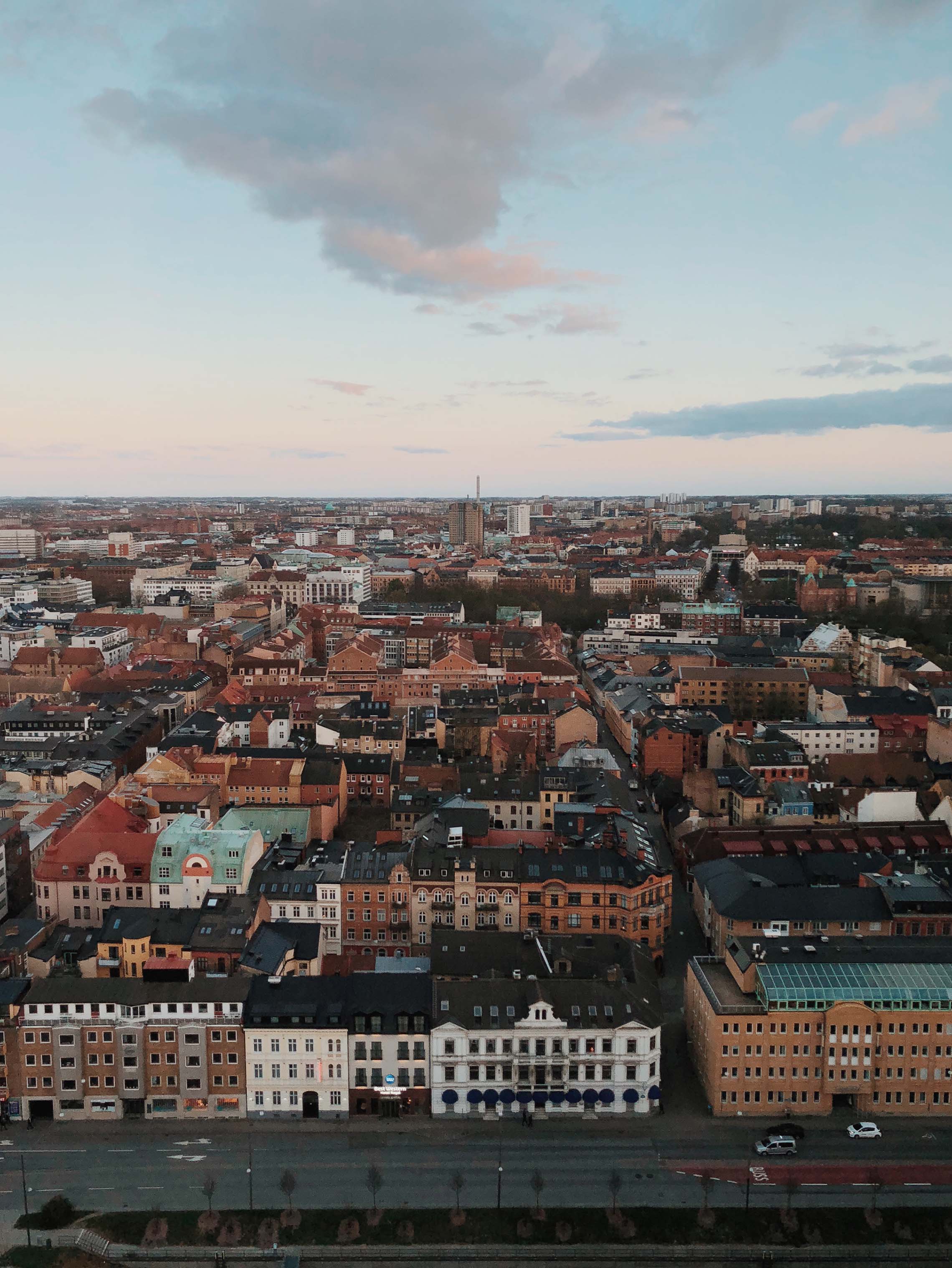 A capture of Malmö from above, by Tyler Stalman. 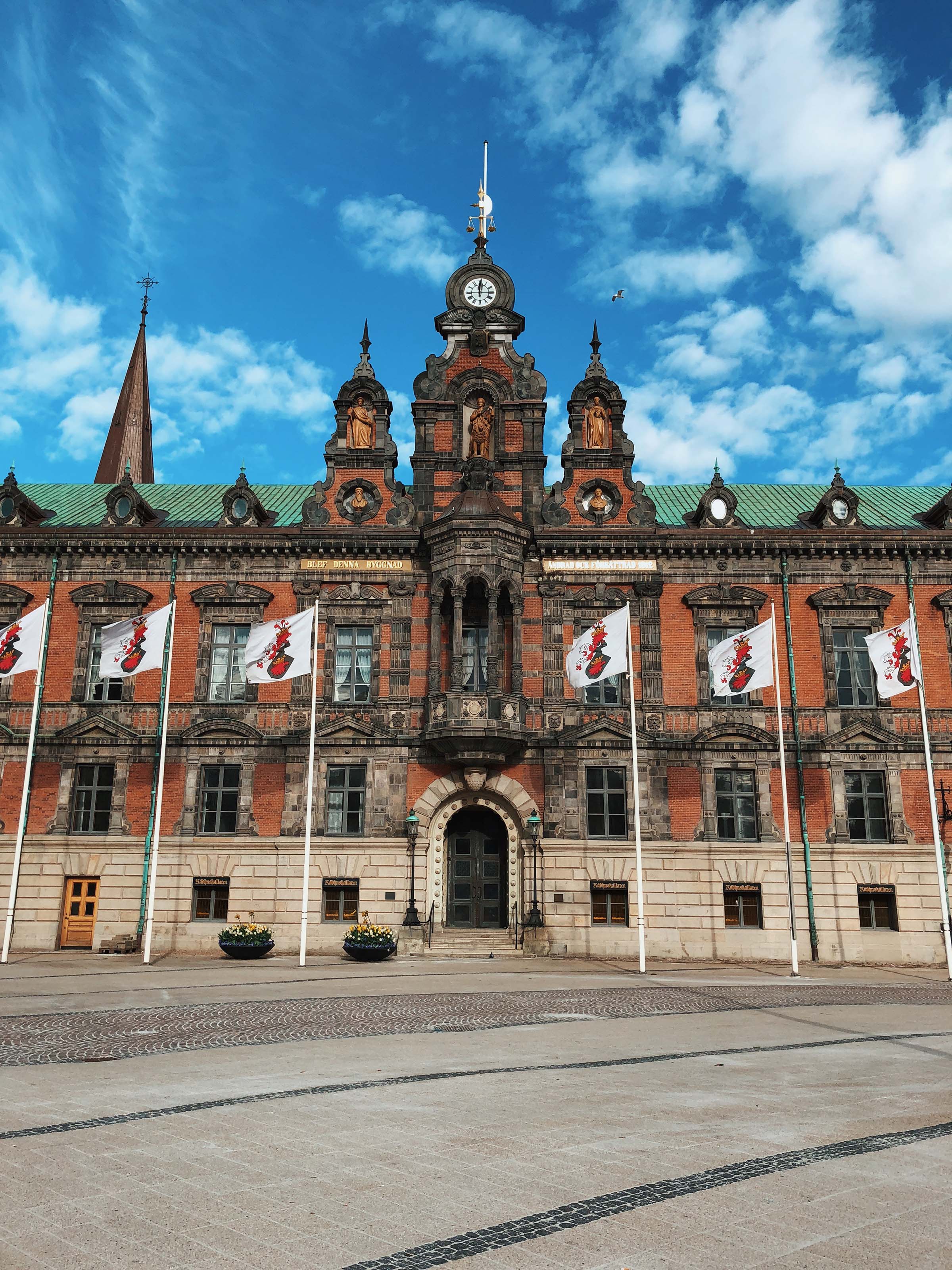 A photo of the historic Malmö Town Hall building, taken by Tyler Stalman.

For those who never thought of Malmö as a destination, think again. “The juxtaposition of the modern buildings versus the old in this pretty small, industrial city doesn’t get the credit it deserves,” Boniecka says. The best time to go explore the city?  May to July offers refreshing temperatures of 60’s to 70’s.

To Do: Take a dip in the Baltic Sea at the retro Malmö bathing house. Beloved by locals, go here to sunbathe, sauna, or enjoy a massage in between swims. (Beware, saunas are naked only.) 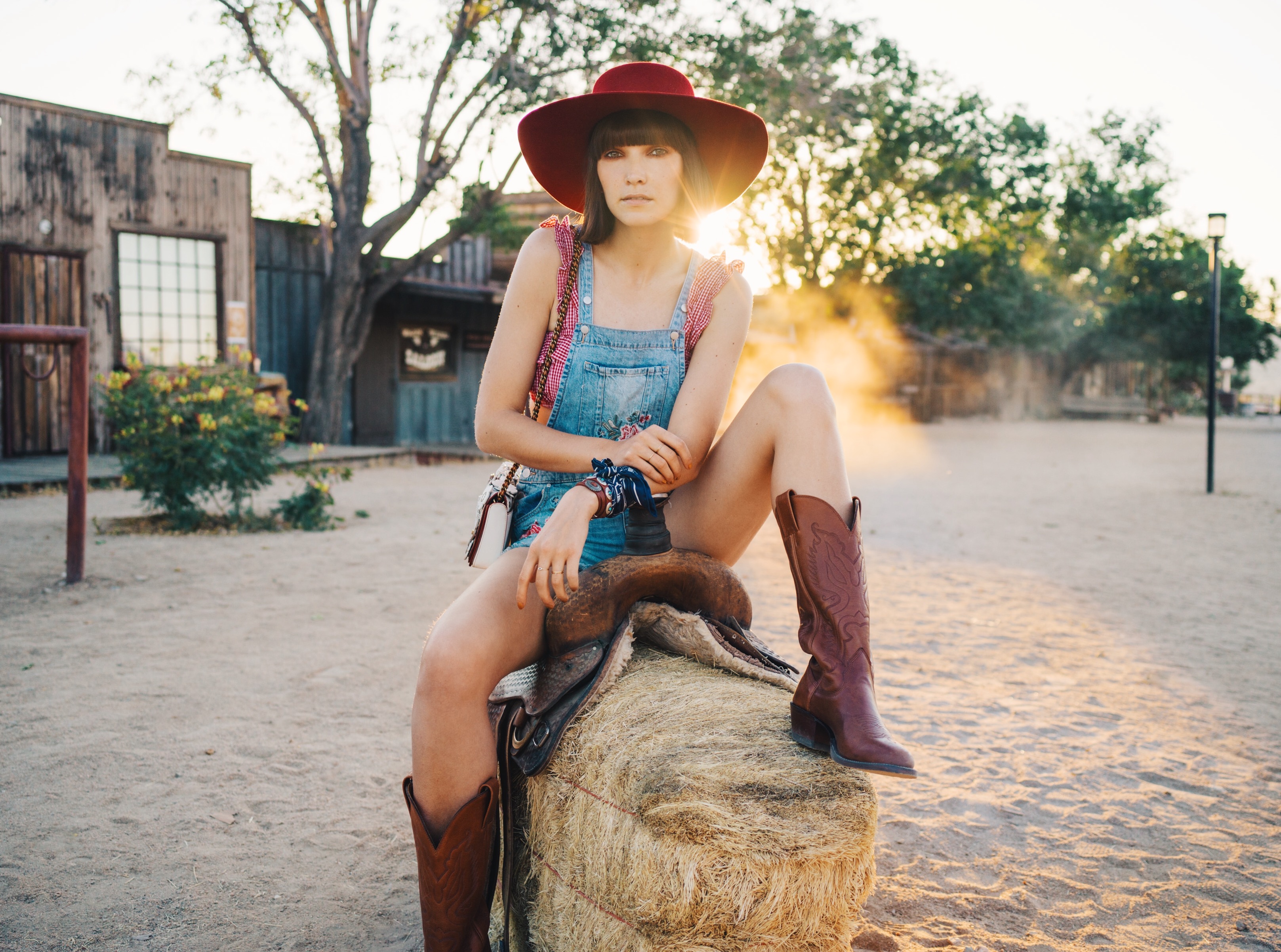 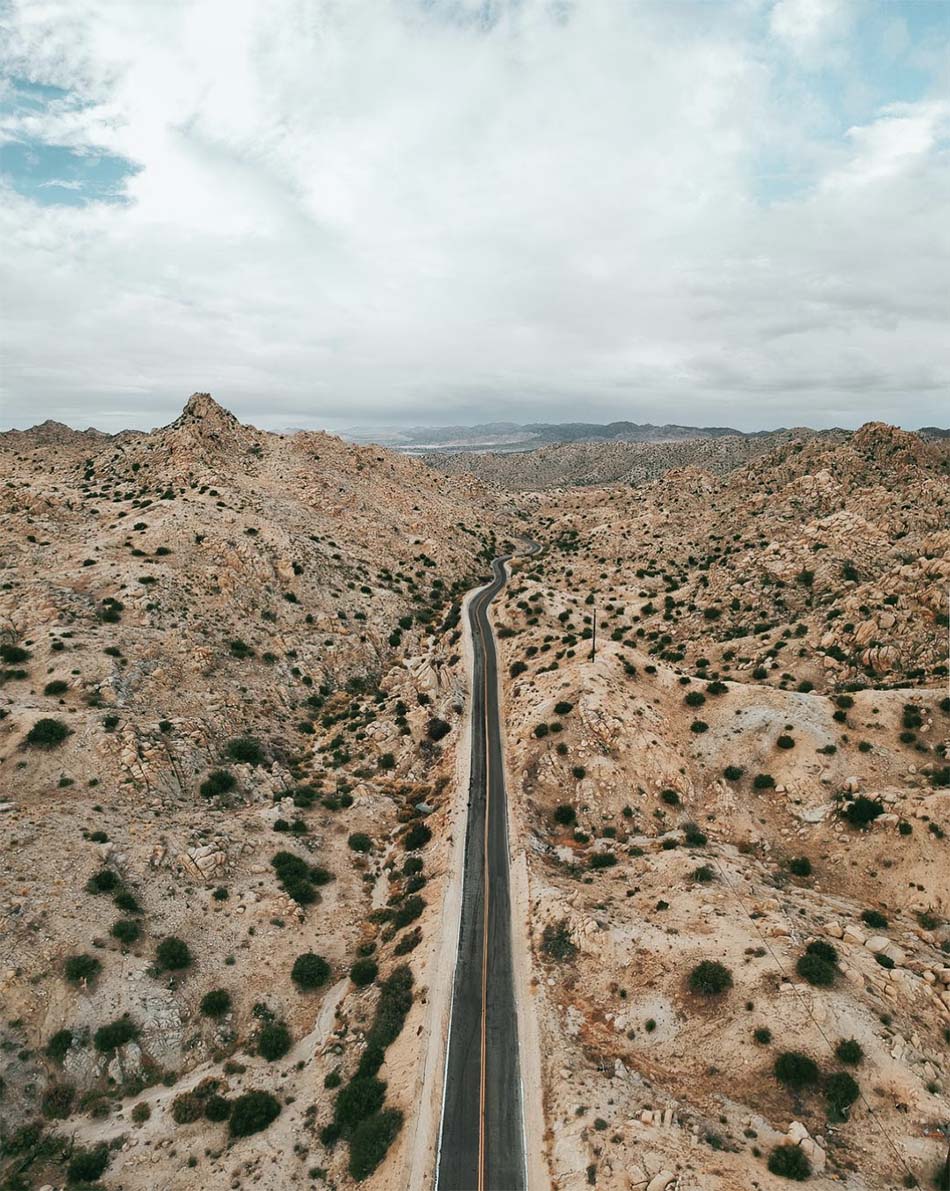 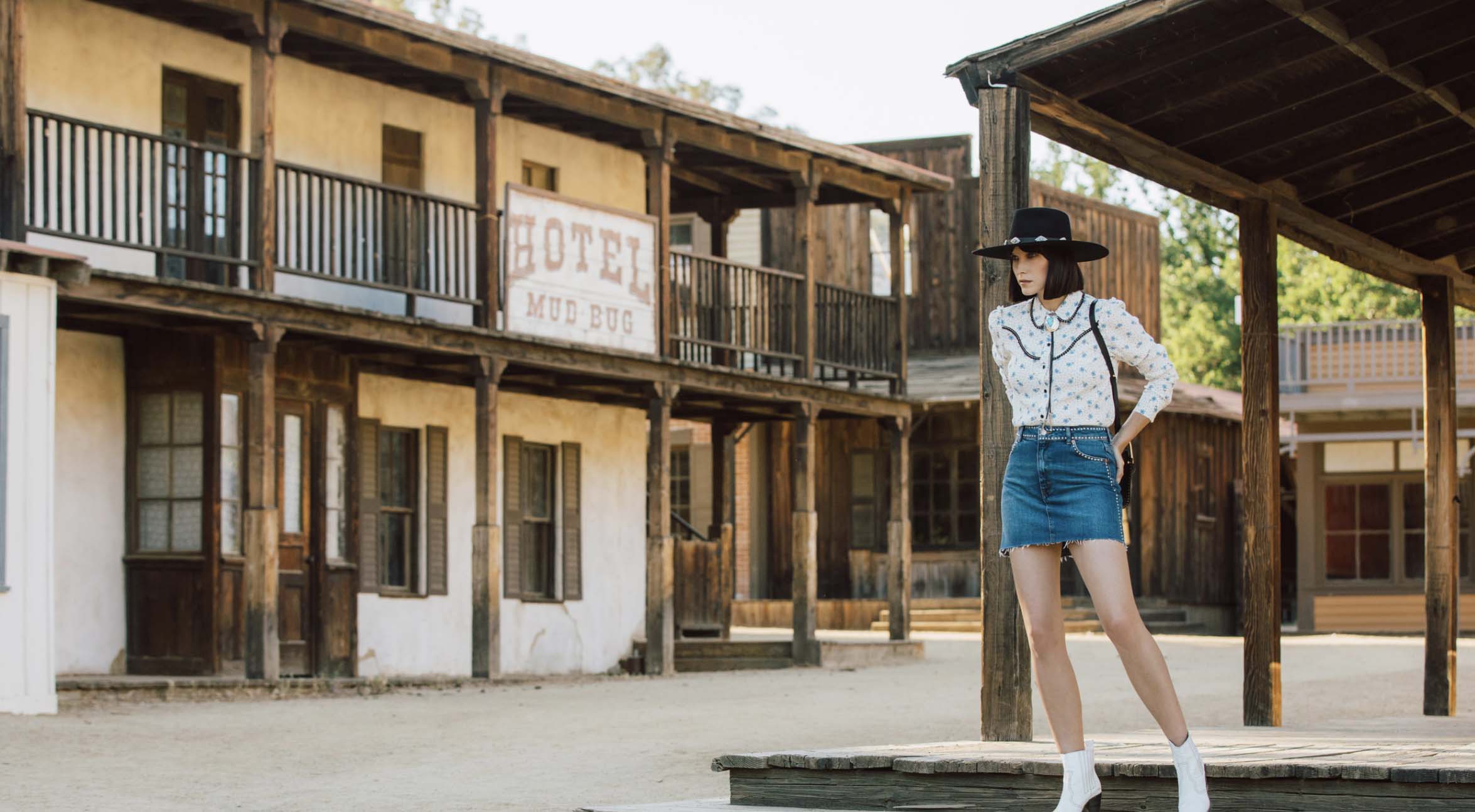 Ania Boniecka explores Paramount Ranch, as a part of a trip to California . Photo courtesy of Tyler Stalman.

Whether you adventure by jeep or foot, choose from over 100 trails of natural desert beauty. Joshua Tree National Park is a classic. “It’s so big that it’s hard to get bored of it,” says Stalman. Plus, enjoy well-respected restaurants nearby. But skip the triple digit weather and visit between January and April.

To Do:  Visit Pioneertown to stroll around epic western movie sets that hosted shows from Westworld to The Cisco Kid.  “It’s always empty and available to explore,” Boniecka says. “It was cool to insert yourself [into the Westworld set] and pretend like you’re part of the experience.” 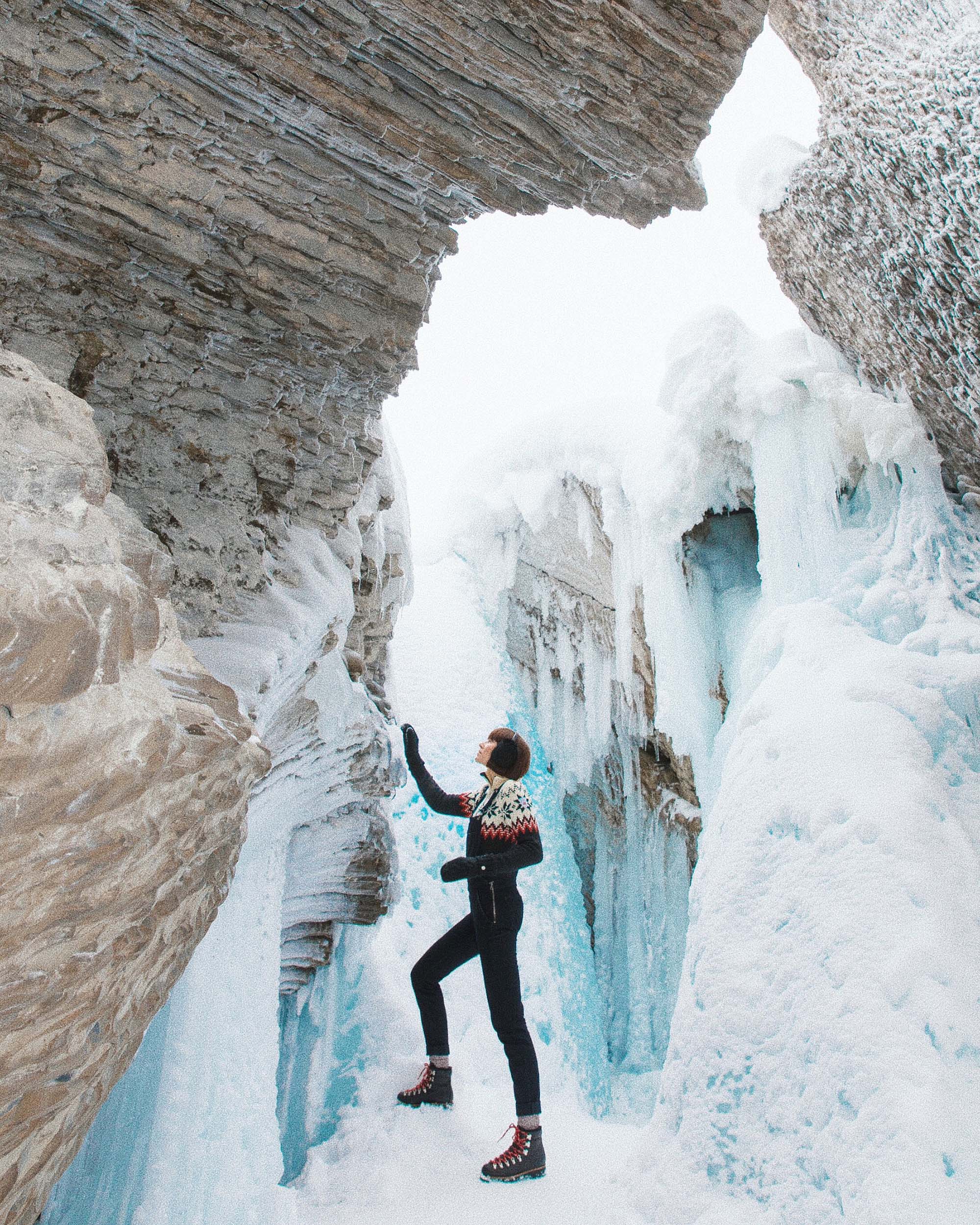 Ania Boniecka and Tyler Stalman explore parts of the Canadian Rockies in Yoho National Park. “The sound of the water running below you echos around the cave,” Stalman wrote on Instagram. 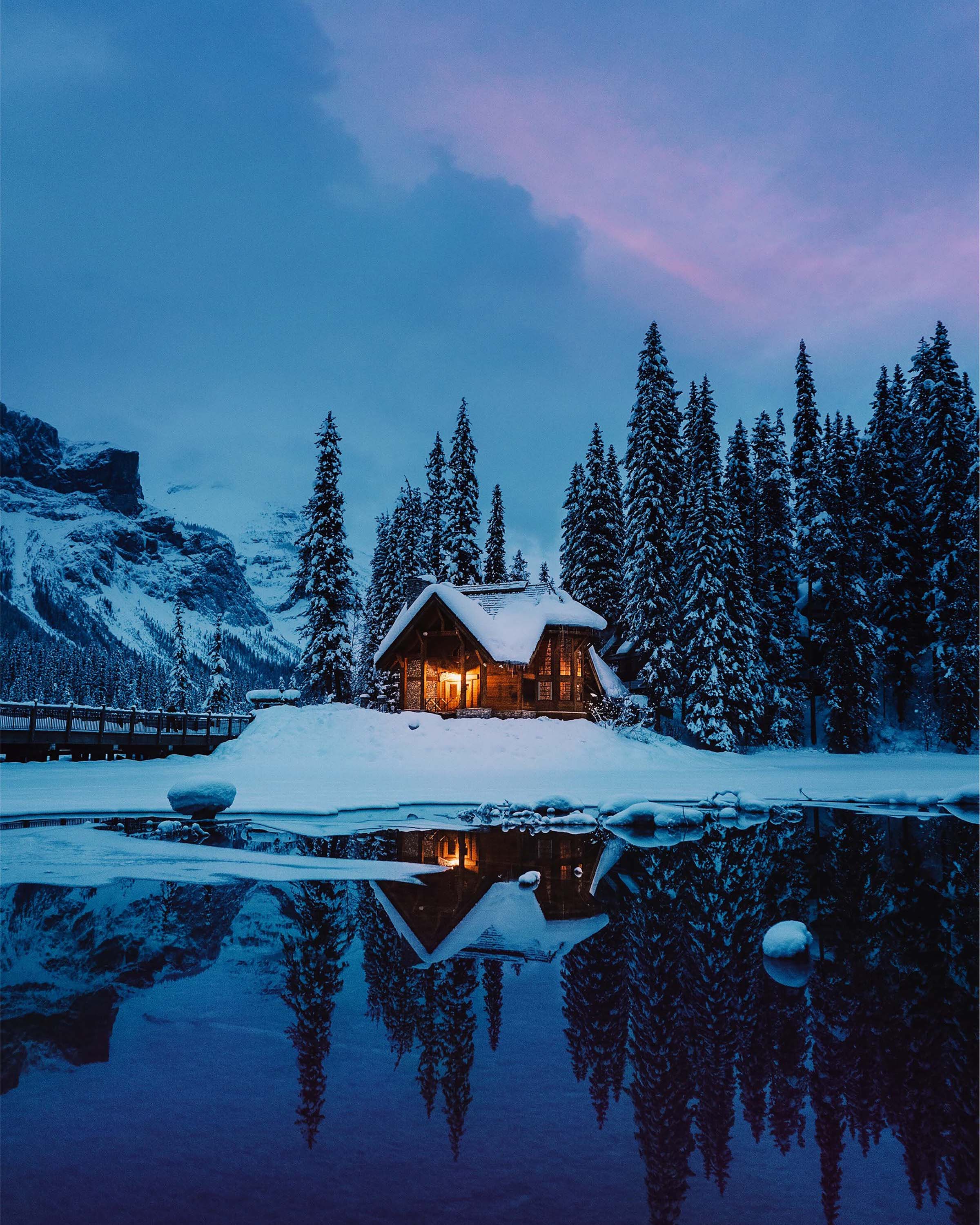 Sunrise outside of Emerald Lake Lodge in Yoho National Park of the Canadian Rocky mountains shot by Tyler Stalman.

A winter spot that’s hard to beat, Emerald Lake Lodge sits in a hidden alcove of Yoho National Park. “There’s no cell service. (Just Wifi.) You can rest from the social media and being connected at all times,” Boniecka says, who likes to lounge by the lodge’s century old fireplaces.  The lodge also boasts an oak bar salvaged from an 1890’s Yukon saloon.

To Do: Scenic snowshoeing, skiing, and hot-tubbing. Oh my. 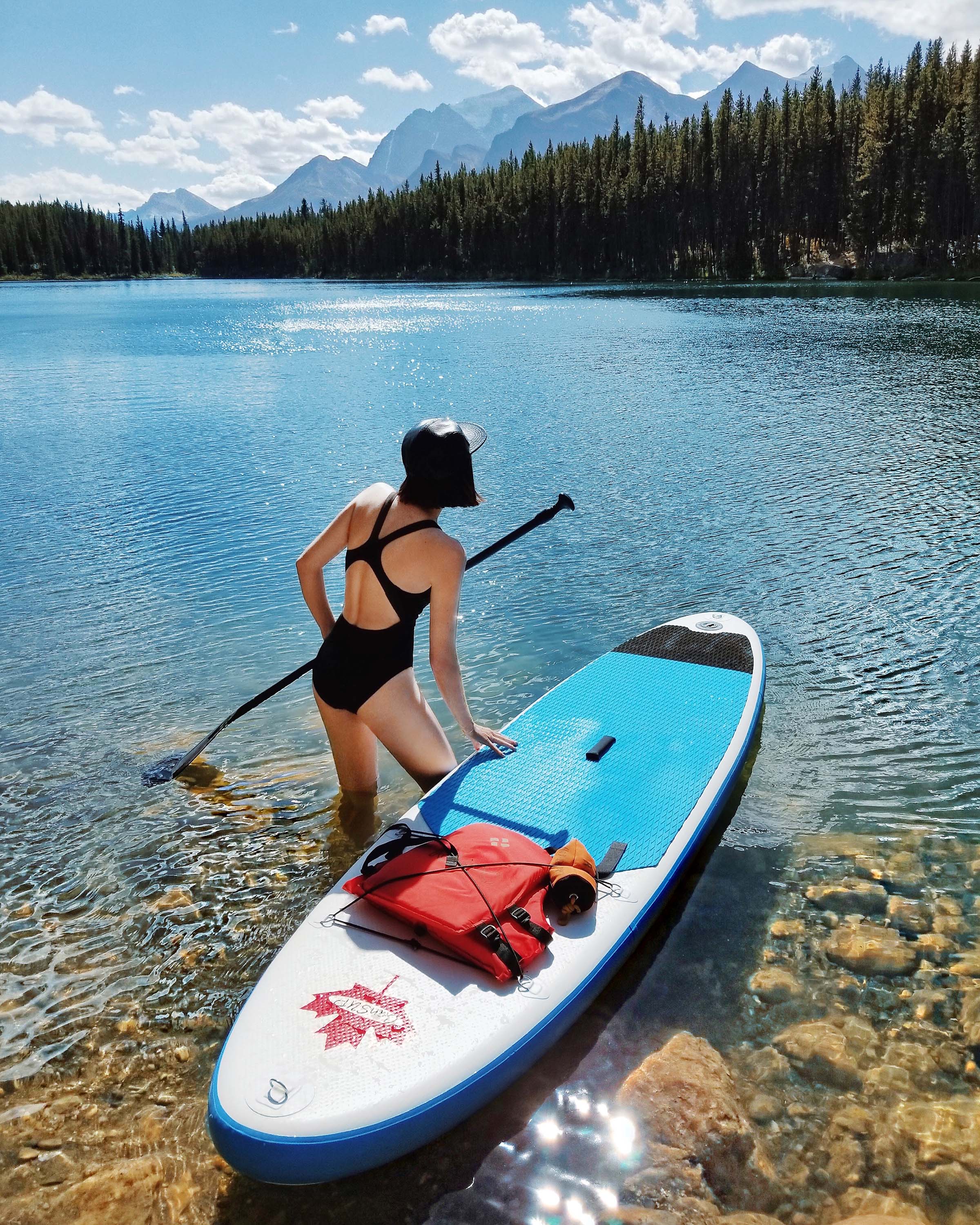 Ania Boniecka paddleboards in as part of a trip to Banff National Park, Alberta. Photo by Tyler Stalman. 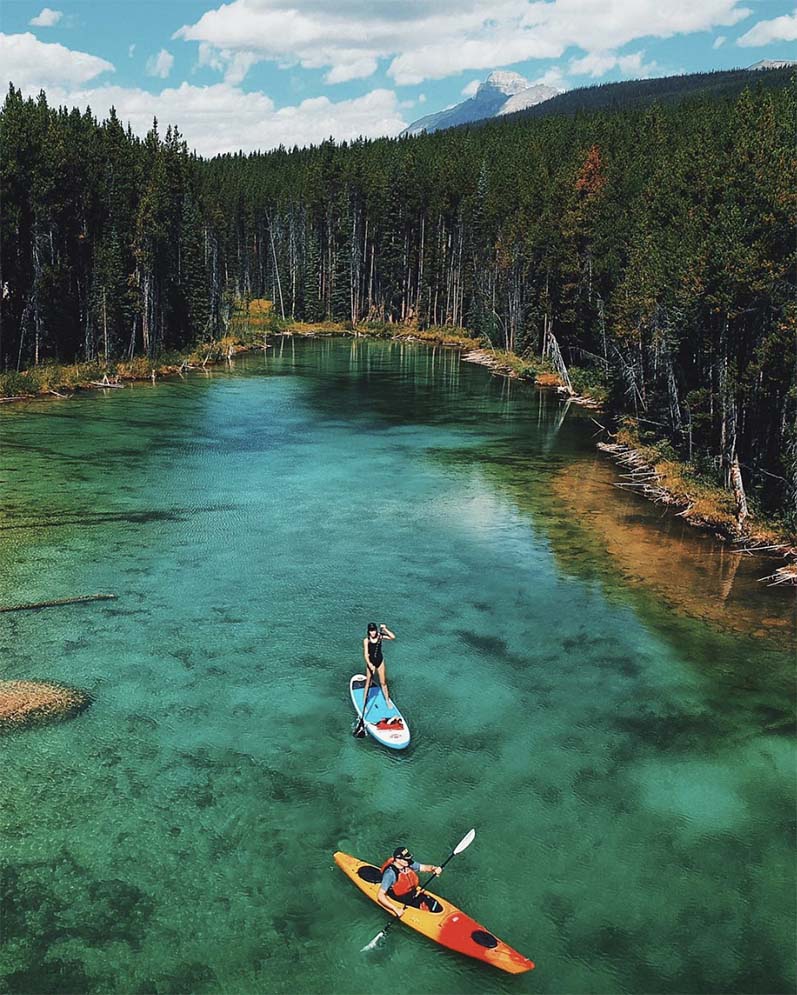 This picture-perfect mountain town is ideal for summer exploring. Take one or two days to visit Canada’s oldest national park, where Marilyn Monroe spent time to film ‘The River of No Return,” (1953) here.

To Do: Spot the wildlife while hiking, picnicking, or paddle-boarding.  “There’s always a bear or a moose on the side of the road,” Ania says, a Calgary local. Prime time to visit: June to August, when weather is warm and welcoming. 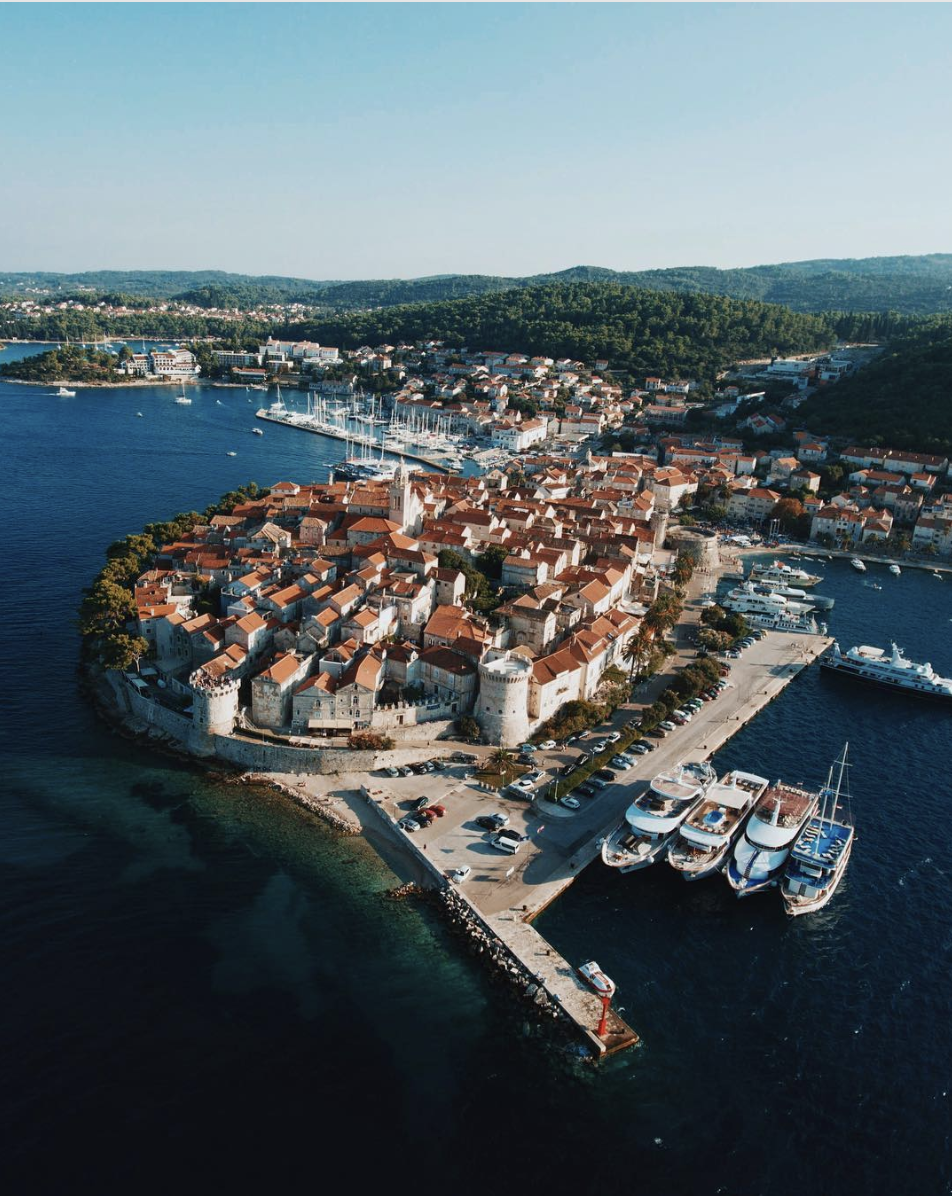 Korcula Island from above, courtesy of Tyler Stalman. “Korkula is great to walk through, but it has to be seen from a distance to be fully appreciated,” Stalman wrote on Instagram. 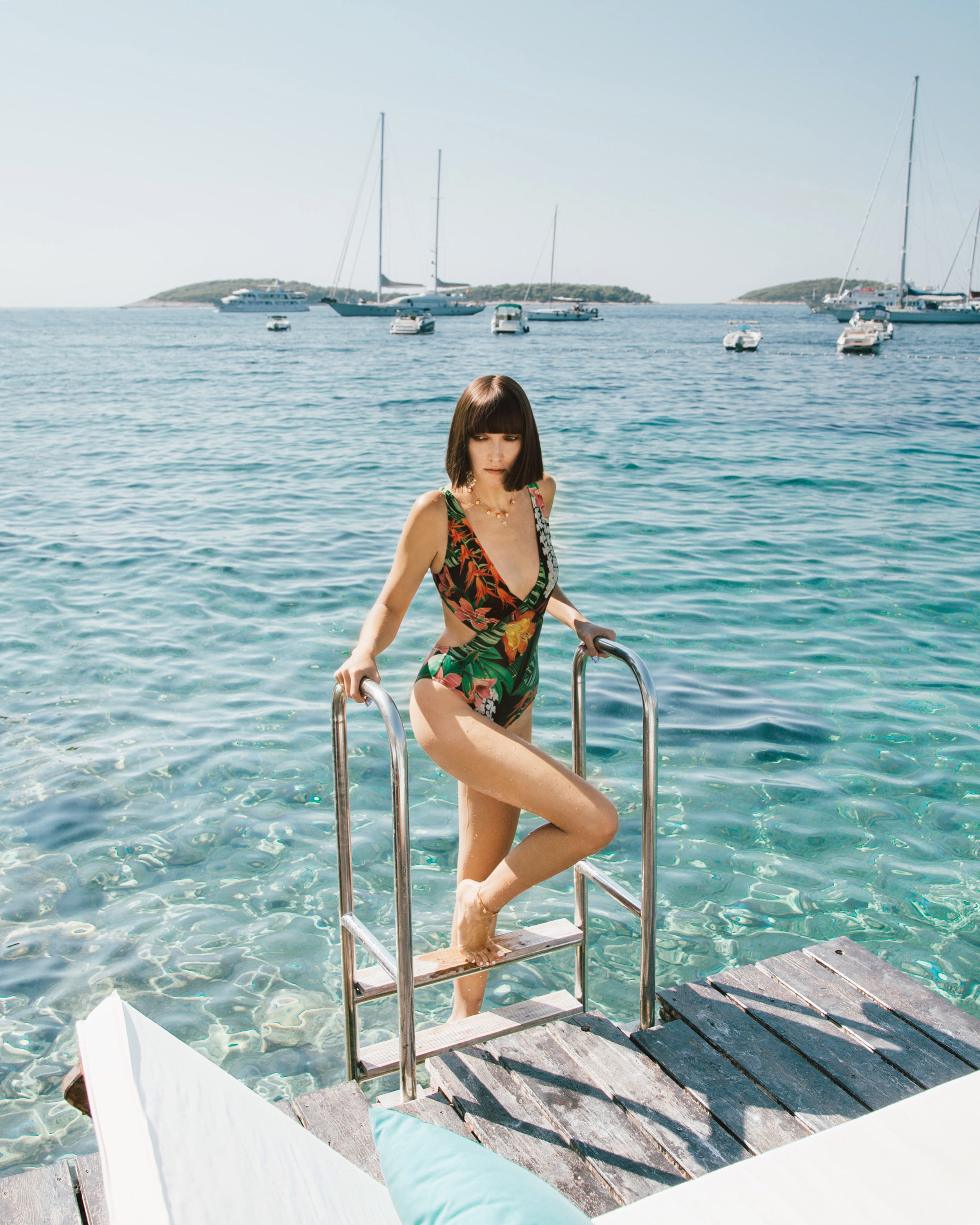 Ania and Tyler explore the coast of Hvar on a trip to Croatia.

“We knew Croatia was nice. But within 24-48 hours of arriving you’re like, ‘Wait, this is just exceptionally nice.'” Stalman says.

Most places in Eastern Europe make one choose between seeing city or nature. But Stalman says Croatia provides the perfect balance of a flourishing cultural city and stunning vistas.  “Korčula and Hvar Island were so beautiful with almost no tourists,” Ania says. (Dubrovnik tends to be more touristy and expensive.) The best bet is visiting during “shoulder-season” months of May, June, September and October.

To Do:  Eat seafood and go boating. There’s no license needed to boat in Croatia, so rent a private boat and just go right out onto the water. “There are so many hidden beaches and gems to discover,” the pair raved.

While it’s easy to compare your vacation shots to those in the Instagram world, the real value is in the experience. “The most important thing is to be true to yourself, not to follow what other people are doing.” Boniecka says. “Be able to judge what’s beautiful on your own, without having constant validation from other people.”

Keep up with their adventures through Ania‘s blog and Instagram. For tech reviews, professional photography or cinematography tips, and travel guides, see Tyler’s Youtube channel.