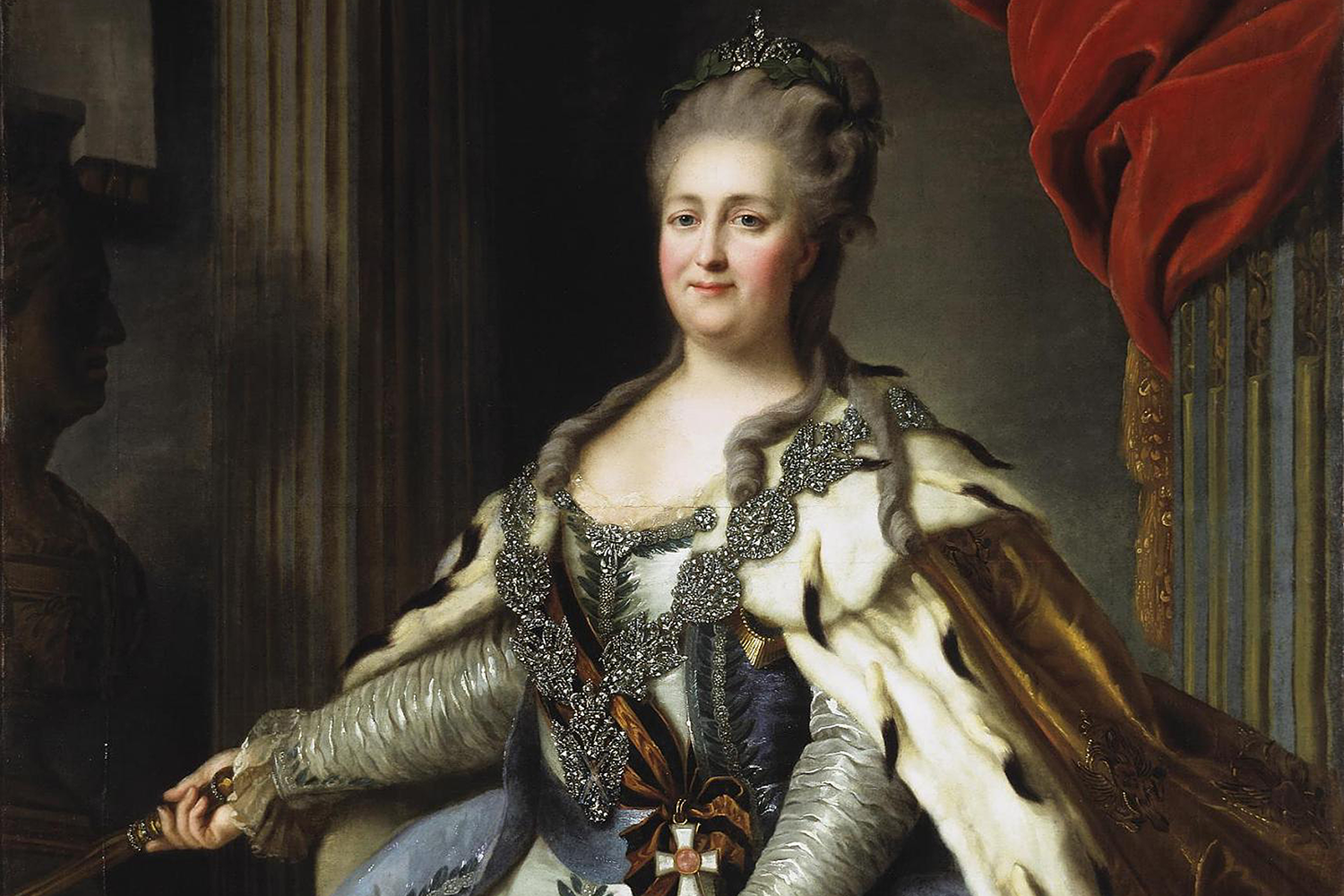 Girl could get it, but that's not the point.
Fine Art Images/Heritage Images/Getty Images
By Kayla Kibbe / October 22, 2019 8:08 am

By now, we all know Catherine the Great didn’t really fuck a horse. Actually, you might not know that, considering the rumor — which was conceived to tarnish the controversial monarch’s reputation after her 1796 death — has been repeated as fact as recently as a 2011 episode of The Big Bang Theory.

Catherine the Great, who ruled over all of Russia for more than three decades, was a legendary conqueror and forward-thinking ruler who championed progressive causes we still, unfortunately, debate today (ahem, vaccines). After a life of history-making accomplishments, however, the thing she is best known for in most circles is something she never actually did: die while attempting to have sex with a horse.

The reason this absurd rumor is the only “fact” most of us can readily recall about the great monarch can be boiled down to one simple word: misogyny. Throughout Catherine the Great’s life and well after her death, the Russian ruler’s reputation was plagued by a series of calculated rumors about her sexual “deviance” intentionally spread by her political adversaries … most of whom were — you guessed it — men.

In the wake of HBO’s new miniseries, the aptly if predictably titled Catherine the Great, a flurry of articles and op-eds defending the show’s eponymous monarch have surfaced in an attempt to separate the ruler from the centuries of libel that have long obscured her legacy. But the point isn’t to downplay the monarch’s noted sexual prowess.

While historians have long dismissed some of the more absurd rumors that have colored Catherine’s sexual history (i.e., the horse incident), even the most modest records of the ruler’s reign don’t deny the monarch’s thriving sex life. Like most elite rulers of her time, Catherine is known to have taken a number of lovers throughout her life, often handing out political favors and titles to her romantic and sexual partners.

That said, to paraphrase one of Emma Stone’s great lines from the iconic 2010 teen flick Easy A, the rumors of Catherine the Great’s promiscuity have been greatly exaggerated. Esquire’s recent attempt to sort Catherine-the-Great fact from salacious fiction reported that historians generally estimate Catherine had between 12 and 22 lovers. A 2018 report from History.com favored the more conservative estimate, which equates to an average of fewer than four partners per decade during her adult life. That may well have been a more significant number in the pre-Tinder era, but scarcely anything to blush at from a reigning monarch.

Of course, if you give an angry crowd of thwarted men an inch, they’ll sex-shame you into infamy. This was true before Catherine the Great — Anne Boleyn was literally sent to her grave thanks to salacious rumors from enemies falsely accusing her of various acts of sexual deviance, prompting her daughter, Elizabeth I, to cautiously brand herself as the Virgin Queen throughout her own rule. And, surprise, it’s still true now. Today, we call it “slut-shaming” (an admittedly controversial term in its own right), but it comes from the same place: a culture that fears the level of power women can wield outside the confines of patriarchal structures dictating “appropriate” female behavior.

The key to honoring Catherine the Great’s legacy is not to downplay the few factual details we have about her sex life. The monarch’s fearless embrace of sex positivity centuries before it was a thing should well be considered yet another progressive aspect of her trailblazing reign, especially in an HBO costume drama of which the majority of viewers, myself included, would expect a fair amount of bodice ripping. Rather, the key is to remember that Catherine’s historical contributions didn’t end outside the bedroom. That said, girl could get it.