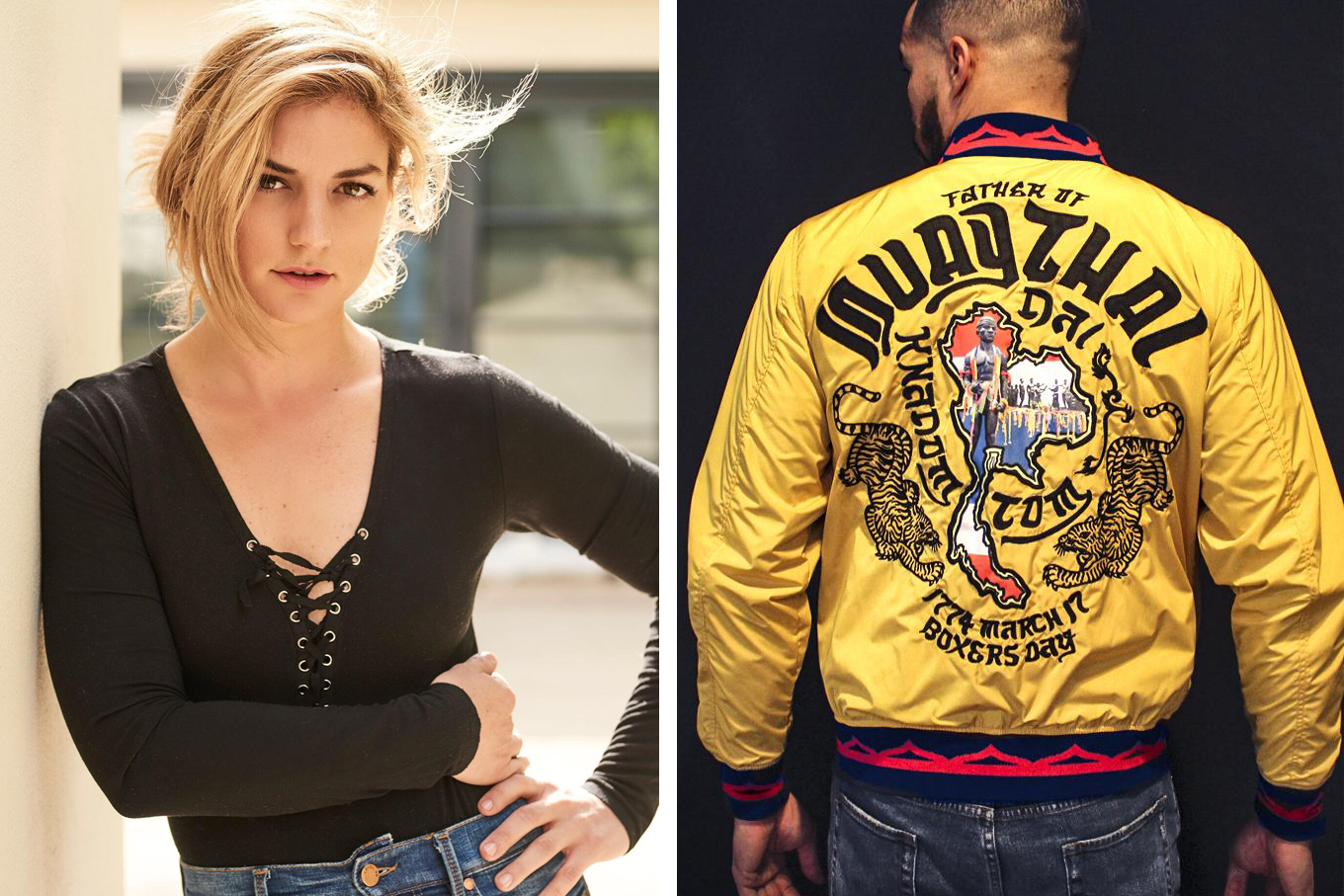 Considering she’s the party responsible for the undeniably stylish ensembles seen (and photographed) on the likes of Donald Glover, Ryan Reynolds, Chris Evans and The Rock, we’d say that celeb stylist Ilaria Urbinati’s credentials pretty much speak for themselves.

From killer red carpet looks to effortless casual street style, we’re talking about a woman who has forgotten more about crafting swaggy kits than most of us will ever know. So when we heard she was releasing her very own collection in collaboration with heritage-focused athletic brand Roots of Fight (the makers of what your correspondent stands by as the most badass workout tank ever), we were excited to check it out.

Disappoint she did not, working with her trainer and former world-ranked Muay Thai fighter Johnny Hunt to create a series of eye-catching pieces inspired by Nai Khanom Tom, the father of Muay Thai who, according to legend, won his freedom from a Burmese prison in 1774 after defeating 10 consecutive fighters with the Art of the Eight Limbs.

At the collection’s center: the “stadium jacket,” a heavily-embroidered yellow number that’s guaranteed to turn more than a few heads both in and out of the gym.

Subtle it is not — but if there’s anyone who can teach a fella the art of introducing some flair into his wardrobe without looking like he’s trying too hard, it’s Ilaria.

So we sat down with her for a tutorial on how to do exactly that.

InsideHook: What’s a popular misconception guys have about “flashy” clothes?

Ilaria Urbinati: I feel like a lot of guys confuse flashy with fashion forward. To me that’s a mistake because good taste and being cohesive should always come first. But I do love seeing guys be more adventurous and taking risks.

The jacket from this collection is very much the showstopper, what would you recommend pairing it with?

I would say don’t overthink it and just throw it on like you would any bomber jacket. But you can’t go wrong with a pair of slim, vintage looking jeans (NOT skinny, I’m so tired of seeing men in overly skinny jeans) and a solid white or black tee. I loved the way we styled it on our model for the shoot. And Johnny wears his with slim chinos in all sorts of colors with good sneakers and always looks cool.

You often hear the phrase “just wear it with confidence,” but what does that really mean?

That’s everything right there. It means, own what you wear. The difference between a guy who can pull off anything and a guy who can’t is just that — confidence. In more literal terms, don’t overthink it. Don’t overanalyze it. If you don’t feel like yourself in it, don’t wear it. And when you try something new, just have fun with it and remember that it’s just clothes. You can always change your clothes, it’s not the end of the world.

What’s the key (or keys) to working something more splashy and/or conspicuous into one’s wardrobe?

Pick your battles. If you’re going for a splashy item, maybe keep the rest a little more chill. Not too many bells and whistles. But I also find that if you work within a sort of theme, you can pull off a lot. Wearing various prints together works best if they’re within the same color family. Or if you’re doing a look that’s sort of one vibe (like a very ‘70s or ‘90s look or whatever it is), try and be consistent with the rest of the look so it feels cohesive. Having said that — don’t go too literal with your eras because you also don’t want to veer into costume territory.

I think the main mistake is questioning your choices. You’re in it now, so just wear it.

What’s a thing you tell your clients when trying to get them to step outside their comfort zone a little bit?

You only live once? Trust me and shut up? For the most part that’s the gist of it but if I can feel that they’re actually truly uncomfortable in it or not feeling like themselves, I won’t push. I’ll pick my battles. I can only win a client’s confidence if the next time he comes in he’s like, “Whoa you were right, I felt so good in that and everyone complimented my outfit!” If they come in and they say, “I really didn’t feel like myself all day,” then I’ve failed. But actually that’s never happened — ha. I mean, part of being a good stylist is knowing how to read people.

I guess when you’re dressing yourself, the advice would be: know yourself, and if you’re not feeling like the best version of yourself when you put it on, you’re not having fun trying something new, or you put it on and just feel awkward, don’t wear it. A good rule is be willing to try on anything. But don’t force yourself (or your clients) to wear it if doesn’t feel great once it’s on.

What’s a style flex that you hate every time you see it and you wish people wouldn’t do it?

When I can tell a guy is just throwing on a bunch of stuff to see what sticks. Like just trying to be interesting. You can smell that kind of attention-hungry thing on a person and it’s not cute.

Is there a particular article of clothing that’s best to start experimenting with? E.g., shoes, pants, etc.

Probably a shirt — if you start with an interesting pattern or color or shape, put it on with a classic trouser and cool shoe, you’re probably good to go.

Are there any iconic flexes you’d recommend?

A well-tailored suit in an interesting tone. An unexpected color is always a safe place to start, because good tailoring makes up for everything.

Things like clashing patterns, big logos and wild color combinations across an outfit seem to be very much a thing currently — is there a method to the madness? Like general rules to pull this off without looking like a jackass?

Own your look, work within a cohesive idea, and don’t try too many things at once.