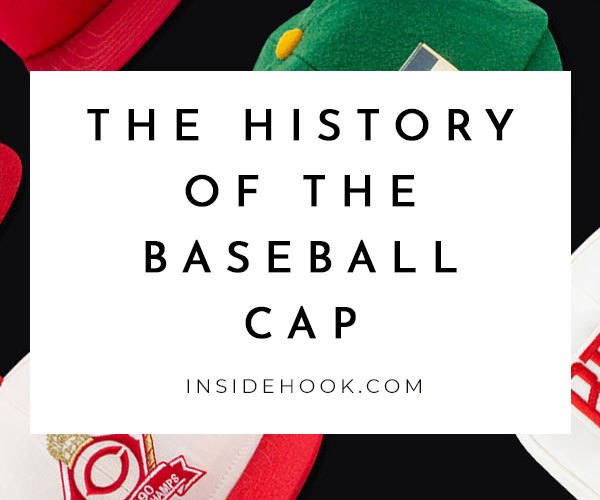 Though there’s some dispute over whether the game of baseball as we know it was actually invented in Cooperstown, there’s no debating that the modern-day baseball cap traces its roots back to Upstate New York. But the ballcaps you see on the heads of today’s Major Leaguers originated about four hours west of the Hall of Fame, in Buffalo.

Founded by Ehrhardt Koch in 1920 as the E. Koch Company, New Era Cap Company received the name it still has today two years later, in 1922. But with the company primarily focused on producing Gatsby-style caps, it would be 12 more years until New Era made their first baseball hat, after Koch’s son Harold noticed how popular baseball had become and pitched his dad on the pivot.

Constructed from six panels stitched together, New Era’s Brooklyn-style hat was actually regarded as being made from the best “performance” materials of the day: a leather sweatband and heavy wool that would soak through on a hot summer day.

“They went to the closest team to us in Buffalo, which was just a train ride away down to Cleveland,” New Era brand historian Jim Wannemacher tells InsideHook. “They knocked on the door and sold them the first hat. It looks like the Cincinnati Reds logo, but it was the Cleveland Indians back then. They started there and then every year after that, moving through the decades, they would pick up another team. There were only 16 teams back then. Our current CEO Christopher Koch’s mom says Harold told her that once they got a team, they never lost it.”

Though teams in MLB would pick their logos, New Era had some influence over the way they actually appeared in hat form.

“If you look at the Yankees logo on their hat versus what’s on the front of their jerseys right now, it’s not the same logo,” Wannemacher says. “In order for us to embroider it, we had to make some tweaks to it. When we made tweaks there must have been some person there with ADD, and they fixed it. If you look at a true New York Yankees logo, it’s not symmetrical or balanced. It was actually designed by Tiffany’s, and whoever designed it didn’t have a lot of concentration on the font weights and all that stuff. That’s what they still use on the uniforms now. But we tweaked it to make it cleaner on a hat and make it easier to embroider on such a small scale.”

The business grew steadily through the ’30s and ’40s, but with only 25 players on a major league roster, simply selling a team a complete set of hats was not a huge source of revenue. As a way to generate more money, New Era made sure each team had home and away caps as well as a small supply of backup hats. Also, since frugal MLB teams did not want to buy new hats every season, New Era got into the cleaning business.

“At the end of every season, they [MLB teams] would box up the caps that were soiled or torn or beat up, put them in a box and send them back,” Wannemacher says. “We had a program where, for $1.50 a cap, we would refurbish it, put it back in the box and send it back to them. So they weren’t buying complete sets from us every year.”

“A big part of our revenue base back then was off of going door to door, town to town, selling to little leagues, high schools, amateur leagues, all that kind of stuff,” Wannemacher says. “It was a lot of work, but we had a pretty good sales force who went out and did it. You could pick your alphabet, your color and we would set you up like that. We did a lot of that kind of stuff over the years which kind of fueled our business for a long time. They had a pretty good foresight back then in understanding that, if Major League Baseball players wore it, then everybody else would fall in line.”

New Era began continued hats in pretty much the same way until 1954, when, after the death of his father, Harold came up with the classic 59FIFTY-style cap as a way of making the hates more uniform throughout the League.

To help ensure a team’s logo was always pointing straight out like a billboard for the organization, Harold outfitted 59FIFTYs with buckram on the inside to help bring the front of the cap forward, no matter what shape a wearer’s head was.

“That’s why we started doing the buckram just in the front two panels, to give that structure and that uniformity,” Wannemacher says. “Then he [Harold] cleaned the templates up to use lighter wool and lighter sweats and beading. He rose the stitching and the hat became the 59FIFTY we know today. The panel sizes and shapes haven’t really changed much. A lot of what’s changed is how it’s blocked.”

So, what exactly does 59FIFTY stand for?

According to Wannemacher, that design remained largely unchanged, other than new teams being added, until the 1980s.

One of those changes was giving teams the option to have a color other than green on the under-visor of their hats. Up until the ’80s, green was used on the under-visors of MLB hats because it was believed the color helped the reflection of the sun off the turf, meaning there was less stress on a player’s eyes.

But after Florida State University found that grey was actually a better option than green, New Era gave teams the option to switch it up. No one took them up on it until 1990, when the Cincinnati Reds shifted to grey and promptly went out and won the World Series. “We like to take credit for that,” Wannemacher says.

Interestingly, that Cincinnati team also led to another first for New Era and MLB: 1990 was the first time memorial caps were handed out on the field when a team won the World Series.

“We’ll do two sets of hats with about 200-300 in a bag,” Wannemacher says. “We’ll have our guy who’s been doing this since the ’90s waiting in the wings. When he knows who has won, he has a very good way of hiding the one bag and then he’ll take the other one out onto the field, hand them all out and then go back, grab the other one and bring it home with him. The other set gets taken apart and recycled. Our contract says we have to get rid of it.”

The Reds story is a good one, but another classic tale of New Era lore is how Brooklyn-raised director Spike Lee wound up with the iconic red Yankee hat that he, and to a lesser extent Fred Durst, made famous.

“Spike Lee called us before Game 3 of the World Series between Atlanta and New York in 1996,” Wannemacher says. “He got our owner on the phone and said, ‘I’m going down there and I want to see if you can make me a red Yankees cap.’ Our owner Chris hung up on him because he thought it was his friends pranking him. Spike called back and said, ‘Don’t hang up, I’m just asking for a red hat.’”

While New Era’s contract stipulated that the brand could only make blue Yankees caps, Chris decided to go to bat on Lee’s behalf.

“Chris called George Steinbrenner and called [the League office] and they both said, ‘One cap. Yeah, go ahead and do it.’ And Spike being Spike during that game made a spectacle of himself and got seen in the newspapers, and the next day our phones were ringing off the hook with people asking how to get a red Yankee cap,” Wannemacher says. “We had to renegotiate the contract. A couple of years later, Fred Durst takes the red Yankee hat, wears it on stage, puts it in a song and that’s when sales went crazy. That changed our business overnight. We went from a baseball cap business to basically a custom lifestyle type business. We more than doubled our business within five years.”

Nowadays, the 59FIFTY Lee and Durst made famous is made from moisture-wicking polyester that’s UV protectant and designed to help improve performance on the field.

“We’ve gone from what we thought was performance and consistently elevated that over the years,” Wannemacher says. “It just gets better and better. But it’s still a fitted hat and the basic components are the same. It’s sweat and taping and button and all that. That hasn’t changed too much. Some steps are solely done by hand. But now we’ve got 1,300 machines that will do the embroidery. But they all have to be set up. There are still 22 sets of hands that take these 22 steps to make a baseball cap.”

It’s a relatively modest crew for a company that’s now popular around the world and celebrating its 100th birthday.

And speaking of that birthday: New Era is marking its centennial with a number of special collaborations with fashion brands like Levi’s and Helmut Lang along with watchmaker Casio, and a retrospective at the Buffalo History Museum is set to open in Fall 2020.

Hats off to them.