Had Dee Ford not lined up wrong, the GOAT would have simply wound up a goat.

Trailing by four points with 1:01 remaining on the clock in the AFC Championship game, Tom Brady and the New England Patriots snapped the ball on the Kansas City 34-yard line needing to pick up 10 for a first down.

Brady looked to one of his favorite targets – Rob Gronkowski – and threw a short pass to his right that clanged off the tight end’s hands and into the mitts of Chiefs cornerback Charvarius Ward for an interception that should have iced the game for Kansas City.

But, as states across New England let out a collective groan at the pick, a yellow penalty flag on KC linebacker Dee Ford for lining up in the neutral zone sailed onto the field like the answer to a prayer.

That flag, which was indisputably the correct call, negated the interception, gave New England a manageable third-and-5, and saved Tom Brady’s playoff legacy as well as helped extend the Patriots dynasty for at least two more weeks.

On the play following the five-yard penalty, Brady went back to Gronkowski with a deep pass to the left that netted New England 25 yards and put the Patriots in position to retake the lead from the Chiefs, which they did on the following play when running back Rex Burkhead scampered over left tackle for a four-yard touchdown.

Had it not been for Ford’s penalty, the Chiefs would have had the ball with the lead and less than a minute on the clock needing to notch just a single first down to ice the game.

And, given the way the Patriots defense (which allowed the Chiefs to force overtime by advancing 48 yards on a pair of pass plays and kicking a field goal on their final possession) was struggling at that point in the game, Kansas City almost certainly would have picked that first down up.

That would have meant Brady’s final play of the game would have been a game-losing interception. It also would have meant the intended recipient of the pass, Gronkowski, likely would have ended his career in New England with a crucial drop that cost the Patriots the game. Even for as beloved a figure as Gronk, that mistake would have left a taint on his Patriots career.

Without the penalty, neither player would have had the opportunity to connect for 25 yards on the ensuing play or to hook up for a 15-yard connection in overtime on third down that helped set up Burkhead for the game-winning touchdown in New England’s 37-31 win. 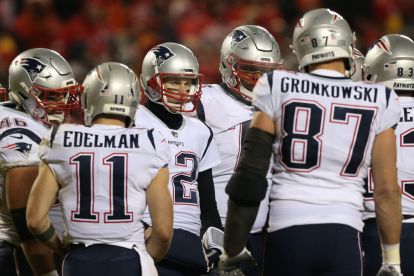 And that is not hyperbole. Quarterbacks – and that term is being used loosely here – Tyrod Taylor, Blaine Gabbert, Josh Johnson, Josh Allen, and Josh Rosen all had passer ratings above 63.2 and they all, no offense, stink.

For reference, Brady’s losing counterpart on the Chiefs, Patrick Mahomes ended his night with 295 passing yards, three touchdowns, zero interceptions, and a sparkling passer rating of 117.

Were it not for the penalty, the GOAT would have simply wound up as the goat of the AFC Championship and cost his team a shot at winning their unprecedented sixth Super Bowl.

Instead, Brady was granted a second chance and made the most of it by leading a pair of touchdown drives that included a trio of tough third-down throws in overtime to Julian Edelman and Gronkowski which only further helped cement his status as one of the most clutch players in NFL history, if not all of sports.

Had Brady’s evening ended with that interception to Gronk, the cement in his clutchness legacy would have been showing some cracks. But, thanks to Ford’s penalty and what Brady was able to accomplish afterward, it’s now stronger than ever.

Going from tossing three picks to lose the AFC Championship game on the road for the third straight time to leading two touchdown drives to win it and lock up a third straight Super Bowl trip in the process is a massive swing. It’s the kind of seismic shift dynasties are built on – or toppled by.

Fortunately for the Patriots, as it did in the 2002 playoffs during the infamous “Tuck Rule” game, the shift on Sunday night went New England’s way and Brady was able to take advantage.

The Patriots went on to win the Super Bowl over the Rams and, thanks to Ford’s penalty and Brady’s play, perhaps they will again.

NFC Championship Game Will Be Round Two of Jalen Hurts Vs. Brock Purdy