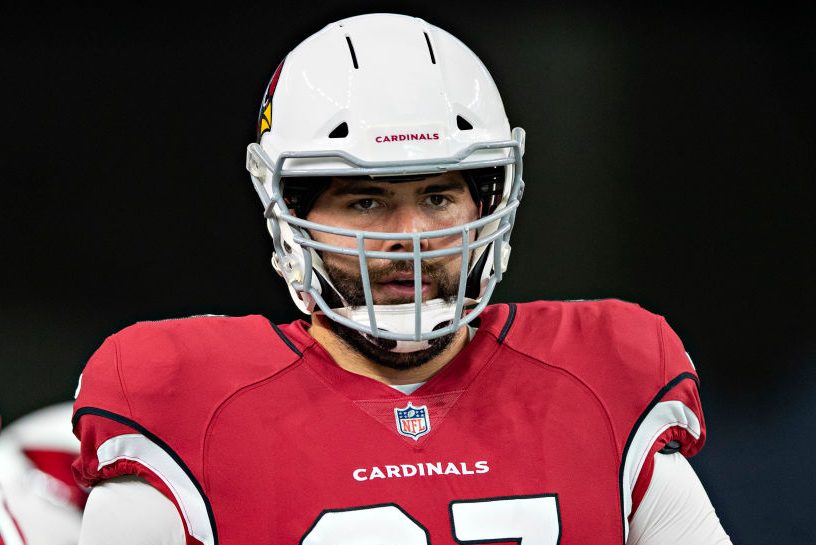 Justin Pugh of the Arizona Cardinals warms up before a game. (Wesley Hitt/Getty)
Getty Images
By Evan Bleier / September 18, 2019 6:00 am

This past August, Indianapolis Colts franchise quarterback Andrew Luck held back tears while he told a roomful of reporters that he hadn’t “been able to live the life I want to live” because of football and said the joy had been taken out of the game.

Days later, Rob Gronkowski spoke publicly about the reasons he decided to retire from football in March for the first time. “I was not in a good place,” the three-time Super Bowl winner said. “Football was bringing me down and I didn’t like it. I was losing that joy in life. I really was.”

The optics of two of NFL’s most recognizable stars, both only 30 years old, speaking out about the mental toll playing football was taking on their enjoyment of life was jarring.

In a sport like football, players being forced to retire because of physical problems is commonplace, but mental issues causing players to voluntarily walk away from the game — and the millions of dollars they’d be paid to play it — is something new.

“If you start losing stars, then it becomes a conversation,” Arizona Cardinals guard Justin Pugh tells InsideHook. “How long have we been losing practice squad players? Guys that aren’t quarterbacks or aren’t Rob Gronkowski? You know what I mean? We haven’t made any changes when those guys leave because they’re not stars. All of a sudden, a couple of stars start admitting and saying things are happening to them, and now all of a sudden it’s a conversation. It’s something that I definitely wish would have been brought up way back when.”

According to Pugh, a first-round pick out of Syracuse who’s playing his seventh season in the NFL, the mental health of NFL players is a topic that merits discussion both inside and outside of the locker room and has been ignored for far too long.

“We need to have an open dialogue where guys don’t feel afraid to come forward and say, ‘Look, I’m having issues. I’m having anxiety. I’m depressed about this game. It’s taking … To take Rob Gronkowski’s word, it’s taking the joy out of the game for me,’” Pugh tells InsideHook. “That is the conversation that needs to happen. I don’t care how much money you throw at something. The stigma has to change and that’s what me talking about this with you is going to help do. Me talking about it to you, Rob Gronkowski talking about it. Those things are going to help change the stigma.”

And, even though the NFL and NFLPA reached an agreement in May which requires every team to retain a behavioral health team clinician whose job is supporting players’ emotional and mental health and well-being., the stigma still persists.

“Sometimes it’s former players that are like, ‘Oh, these new kids are soft’ and whatnot,” Pugh says. “To that I always say, ‘Former players are killing themselves right now.’ Literally putting holes in their chest rather than dealing with the issue of mental health. So when guys like make a joke or say this new generation is soft … I’d much rather be soft and deal with the issues at hand than keep them hidden and kill myself or overdose while trying to self-medicate.”

Pugh learned firsthand how important dealing with the mental side of pro football can be after letting up four sacks during a nationally-televised game against the arch-rival Eagles while he was a member of the Giants.

If we don’t recognize that this is an issue, we’re going to lose more and more guys

Though it was just his second season in the league, Pugh became depressed because he thought his NFL career was over. He was wrong — but it was because he received help from a life coach, not an NFL coach.

“I ended up working with this group called The Handel Group out of New York City and we talked about like mental conditioning and how your mind is like a highway I guess,” Pugh says. “There’s a multi-lane highway. You have your social life, you have your financial life, you have your professional life, you have your family life, and it goes on and on. It’s about clearing the road so you can function at a high level. It’s not having the issues off the field or not having this mental clutter and clarity that helps you perform at a high level, and that helps you be mentally tough. I’m still not where I want to be. I still get anxious before games. I still get nervous even though I know I’m one of the best in the league and there’s a reason I’m a starter in the NFL. I still have doubts that maybe I’m not good enough or whatever. You just keep fighting that constantly.”

Pugh was fortunate enough to find help when he needed it, but he was also open to the idea of taking it — for some guys in the NFL, that isn’t the case.

“A lot of areas that guys in the NFL grow up in, you can’t show weakness,” Pugh says. “They come from these awful areas where if you show any weakness, you’re going to get eaten alive. It’s definitely breaking years and years of conditioning and showing that, if you just open up a little bit, this world has so many great things it can offer you. I don’t know how we change that. As a country, I know we could use a little bit more empathy.”

The NFL could use more empathy too if it wants to avoid seeing more stars follow players like Luck and Gronkowski into retirement at an early age.

“If we don’t recognize that this is an issue, we’re going to lose more and more guys,” Pugh says. “Off the top of my head, I can think of a handful of guys, that if they had some more mental preparation and conditioning, they’d still be playing in the NFL or they wouldn’t be having as hard of a time finding a job as they are.”