Martin is a diehard of both NYC football teams that play in New Jersey. And he's got takes.

If you’ve ever wondered what dark, destructive experiences led Game of Thrones author George R.R. Martin to create a fictional universe plagued by murder, mayhem and rampant incest, we think we might have an answer: he’s a long-suffering New York Jets fan. 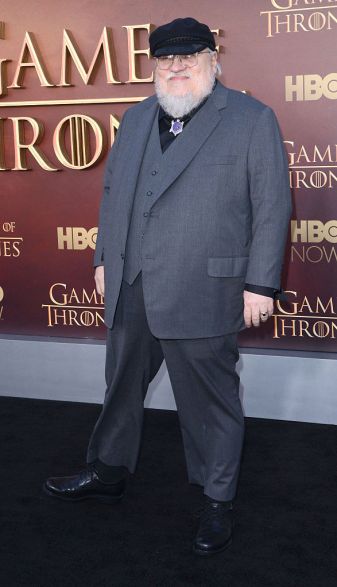 While there’s no way to know for sure, we’d guess the Bayonne, New Jersey, native became a Jets fan when the team signed University of Alabama quarterback Joe Namath to a contract in 1965 while the franchise was still in the AFL.

Martin would have been 17 at the time, then a dedicated member of the chess team and editor for the school newspaper at Marist High.

As for the Giants, we know Martin has been “watching and rooting for the G-Men” since “the Greatest Game Ever Played,” which took place in 1958, when he was 10.

We know this because Martin stated as much in one of the many blog posts he has penned about professional football.

Now 70, the armchair analyst has takes on just about everything pigskin-related, from villains (Jerry Jones) to local heroes (Eli Manning) to wizards (Bill Belichick). Find a sampling of his greatest gridiron musings below.

Martin on the Jets ending their playoff hopes with a loss to the Dolphins in “Life Is Meaningless …” from 2012: “… at least for Jets fans. Pfui. What a terrible way to end the season, losing to the hated Dolphins. With the season on the line, Mark Sanchez played an awful game, and Santonio Holmes failed to show. Oh, well. It’s ‘wait till next year’ for Gang Green. Rex is going to have to make a lot of off-season changes. I still hold out hope that Sanchez can be the franchise qb we need, but the team needs to get back to the ‘ground and pound’ attack of 2010 and (especially) 2009.”

Martin on the Giants trading Odell Beckham, Jr. to the Browns in “Kill Me Now” from 2019: “And now they have traded OBJ. Their best wideout, and one of the very best in the NFL. Beckham was not only the best receiver on today’s Giants, but he was the best receiver this storied NFL franchise has EVER had in their long history, and probably the best receiver they will ever have. They are certainly not going to replace him with the 17th overall pick in the forthcoming draft.” 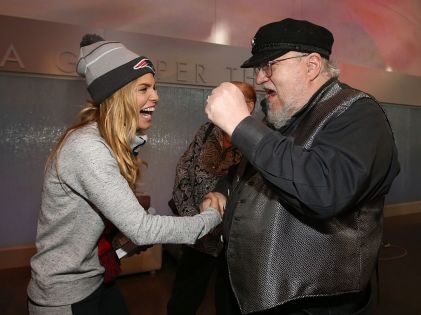 Martin on the Patriots claiming injured Giants tight end Jake Ballard off waivers in “Stealing Jake” from 2012: “He was claimed by another team. To the astonishment of all. Who would do such a thing, you ask? Who else? The New England Patriots. Stuff like this is why we call him Evil Little Bill. The Giants are pissed. Ballard is reportedly pretty unhappy as well. Evil Little Bill says what he did was legal (it was, completely), that there are no “unwritten rules” (there are, that’s wrong, but hell, Bill breaks WRITTEN rules, as in Spygate, so of course he doesn’t believe in unwritten ones, or things like, oh, sportsmanship).”

Martin on rooting for two NFL teams in “Highs and Lows” from 2007: “Another Sunday, and two more football games. Sometimes it’s good to have two teams. The Giants are really on a roll, looking better with each game. I’m especially pleased by the way their defense is playing. Like any old-time Giants fan, I love defense, and the swarming four-headed sack monster the G-men are fielding with Osi, Kiwi, Strahan, and Tuck is splendid to watch. As for the Jets… oy… what can I say? Chad is getting all the blame, but truth be told, it’s not all his fault. In fact, I’d lay most of the Jet problems on the defense. The run defense can’t even stop backups from having 100-yard games, the pass rush is nonexistent, and the cornerbacks commit penalties at the worst possible times.”

Martin on the Giants beating the Patriots in Super Bowl XLVI in “G-MEN!!! G-MEN!!! GIANTS!!!” from 2012: “Life is magical and full of joy. They did it. They did it again. Deja three! First Superbowl 42, then this year’s regular season game in Foxboro, then tonight! Big Blue 3, Patriots 0. Eli 3, Brady 0. Coughlin 3, Evil Little Bill 0. Hot damn. Excuse my enthusiasm. I’d be doing a salsa dance right now, but I did one earlier and I think I threw my hip out. (No, don’t send get well cards, just kidding).” 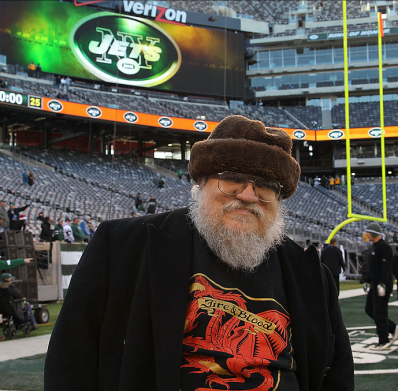 Martin on Jerry Jones’ face following a Cowboys loss to the Packers in the playoffs in “Playoffs, Round Two” from 2017: “Looked like overtime, but they made the mistake of leaving thirty seconds for Aaron Rodgers. His sideline pass to set up the winning field goal was the thing of beauty, a throw and catch to rival Eli’s superbowl tosses to Tyree and Manningham. And afterwards, in the wake of the Cowboy defeat, America got to see Jerry Jones making his I-am-sucking-on-sour-lemons face, last seen in 2007 when it was the Giants who sent the Boys home.”

Martin on the Jets beating the Patriots in a regular-season game in “Evil Foiled! Good Triumphant! Jets Win, Jets Win, Jets Win!!!” from 2015: “Hey, the Jets won! Life is magical and full of joy! Okay, okay, it was not the SuperBowl or anything, just a regular season game. But it was against the New England Patriots, the Horror Out of Boston, the Blue-and-White Walkers from Beyond the Wall, led by Evil Little Bill himself. The Jets always lose to the Patriots, usually in an especially painful fashion. Like they did earlier this season, in Foxboro. But this time they WON! Okay, okay, they are not in the playoffs yet. New England still wins the division (They always win the division, it is so bloody BORING). Gang Green does not even a wild card slot… though now at least they control their own destiny. If they can defeat Rex and his Buffalo Bills next week, they’ll be in the dance.”

Martin on the Giants benching Eli Manning in the middle of a game two years ago in “Eli Benched???” from 2017: “The Giants season is lost, plainly. Whether they win or lose the rest of the way is meaningless. So, yes, it makes a certain amount of sense to see what they have for the future. Eli Manning is aging… though this year’s failures are hardly his fault, given the injuries to the wideouts, the lack of a running game, and the porous offensive line that gives him little or no time to throw. Big Blue has a rookie quarterback on the roster, the third round draft choice Davis Webb, and the team needs to know if he is the answer for the post-Eli era, so they can determine whether or not to spend what will likely be a very high draft pick on one of the quarterbacks coming out of college this year. All that being said…. benching Eli Manning in the manner the Giants did yesterday was classless and inexcusable. And benching him to start Geno Smith is insane.” 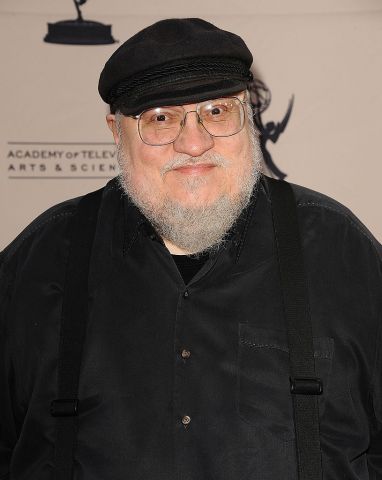 Martin on the Jets trading for quarterback Tim Tebow in “No, No, No” from 2012: “I was drinking my morning coffee when the headline flashed across the bottom of the screen. That sound you heard was me choking and sputtering. My Jets have given up two perfectly good draft picks for Tim Tebow, the worst quarterback in the National Football League. Gak. What the hell are they thinking over there at Gang Green central? Mark Sanchez is not, as yet, Eli Manning, but he is a talented quarterback with a good arm and he completes more than fifty percent of his passes, none of which can be said for Tebow. The last thing he needs is a stadium full of Timomaniacs screaming for Tebow every time a pass falls incomplete.”

Martin on having both of his teams win on a given Sunday in “New York, New York” from 2010: “Life is magical and full of joy. Nice wins by both the Jets and Giants yesterday left me feeling jolly by night’s end. The Jets beat Buffalo pretty much every way one team can beat another. Offense, defense, throwing, passing, you name it. Well, okay, it was only the Bills, and they look pretty woeful this season… but this is the sort of game that the Same Old Jets of years past would have blown. The Giants game was much closer. I love good defense and I got plenty of it in this night game between two of the NFL’s most storied old-time franchises, the G-Men and the unbeaten (previously) Chicago Bears.”

Martin on watching both of his teams lose on a given Sunday in “No Fun” from 2014: “The NFL was certainly the No Fun League for me this week. The Jets lost on Thursday to the despised New England Patriots. The Giants lost yesterday to the hated Dallas Cowboys. So not only did both of my teams go down, but they went down to their most bitter rivals, two teams I loathe.  Gak. The Jets played a much better game than most expected, it must be said. Rex Ryan is a terrific coach, but I fear he is going to be fired at the end of this season. He shouldn’t be.  The fault is not his. The GM has simply not given him enough to work with. Starting at the QB position.  The Jets are not going anywhere with Geno Smith or Michael Vick behind center. Bring back Mark Sanchez. Bring back Chad Pennington. Bring back Vinnie Testaverde.  Hell, bring back Joe Willie Namath. Or maybe give Matt Simms a chance. The Giants… well, losing Victor Cruz was a crippling blow. Though I do have high hopes for our new WR, Odell Beckham. But I don’t think this is playoff year for either of my teams.”