Is It Responsible to Play Golf During a Pandemic?

Around the country, golfing remains one of the last links to the old normal

On top of claiming hundreds of thousands of lives, overwhelming healthcare systems worldwide and disrupting the global economy, the anxious hum of the Coronavirus has inflected even our most everyday tasks and activities with a hint of weirdness. Try as we might, few things we do in an attempt to restore a sense of normalcy are actually normal. One exception to this rule, I’ve found, is golfing, a normal activity that is also not normal right now, if only for the exact opposite reason: It’s strange precisely because of how un-strange it is, how unchanged it feels in the face of so much change.

Non-golfers may be surprised to learn that while so much of the country remains closed, as of this writing, golf course are now legally permitted to operate in all 50 states. As of last week, the National Golf Foundation estimates that 95 percent of golf courses across the U.S. are open, expanding the pool of at-risk workers to include thousands more employees. In a rather Trumpian twist of fate, people will have greater access to tee boxes than hairdressers (to say nothing of unemployment benefits).

Of course, golf is, by design, a “socially distant” game — in the spatial, epidemiological and socioeconomic senses of the term. Its relative accessibility in the present moment belies a history of exclusion, on the basis of gender, race, religion and class. Augusta National, which has hosted The Masters since 1934, barred black members for decades, and only recently began extending membership to women; Muirfield, in Scotland, only voted to permit women when the Royal & Ancient declared that the club would not host the Open Championship until it changed its policy. Even with the federal Civil Rights Act of 1964, it’s legal for private clubs in the U.S. to exclude members for clearly discriminatory purposes — a few still do.

In the face of climate change, golf continues to be a game for which the demand on resources (communal and environmental) is grossly disproportionate to the number of people who play it. Despite valid efforts to reduce the sport’s environmental impact, golf courses, to name just one example, still require a shit-ton* (*not a standard metric) of water: One 2015 estimate showed that 123 golf courses in the drought-plagued Palm Springs area alone accounted for nearly a quarter of the region’s groundwater use. And although it’s true that most golf courses in the country are open to the public, it’s also true that, in a place like, say, Los Angeles, the amount of land private courses occupy in relation to the city’s public parks is enough to whet one’s appetite for even the mench-iest of the rich.

All of this aside, I was fortunate to have been able to leave New York City in mid-March with my clubs in tow, decamping to Blowing Rock, North Carolina, a quaint mountain town near the border of Tennessee. With nothing better to do, and the immense privilege of good health and a remote job, I’ve managed to play more rounds in the past month than I did all of last year.

I’ve frequented two public courses within 30 miles or so of where I’m staying, both of which have taken varying degrees of precaution against the spread of the virus.

Boone Golf Club is carved into a valley, surrounded by the Blue Ridge Mountains. If you truly lived under a rock, the only indication that you were golfing in the midst of a global pandemic might be the glass partition in the golf shop and the foam wedge stuffed into each hole to prevent players from removing the flagsticks. (Additionally, with the exception of family members, only one player is allowed per cart.)

Cedar Rock Country Club, which is open to the public, boasts a challenging tournament-level track at dinky-municipal-course prices ($20!). According to their website, it was the number three ranked course in the state of North Carolina — in 1970. You can tell things haven’t changed much since then: the dusky halls of the clubhouse are haunted by a kind of grandmotherly elegance, like Caddyshack-cum-Appalachia. The employees here seem comparably unfazed; myself excluded, nobody wears a mask. Playing a round there feels incredibly, weirdly normal: the only noticeable difference is the small foam ring in each hole, which simply prevents the ball from hitting the bottom of the cup.

Before the pandemic, enjoying golf could feel complicated the way enjoying a good steak could feel complicated — by which I mean, not prohibitively complicated, assuming you’re the kind of person for whom climate-related issues are more of a pressing collective crisis than a matter of severe individual asceticism. But the present moment clarifies this conflict: to enjoy a round of golf now feels more immediately immoral, as if I’ve paid 20 bucks to access an alternative universe where the virus doesn’t exist.

Still, the pandemic has the effect of clarifying golf’s unique virtues, too. What has struck me most during my rounds is my ability to stay present: to hit one shot, focus on the next as I walk to my ball, hit that shot, and so on and so forth, without considering much else. Surely, this is the case whenever I play —especially when I play alone — but it seems more critical now than ever.

Indeed, the most important thing to focus on during golf is keeping your head down. (As my grandfather used to say, “You can’t hit what you can’t see.”) Without turning a blind eye to the virus, this might be the most important thing to focus on during the pandemic as well. Never before has the future felt so expansive and unknowable, the present so elusive and compact, like a trinket buried in the sand. If golfing right now has confirmed anything for me, it’s that keeping your head down — cherishing a nice cocktail, or a good book or a goofy conversation with friends — can provide a tenuous respite from the worry that seeps in, as soon as you feel the need to lift it back up. 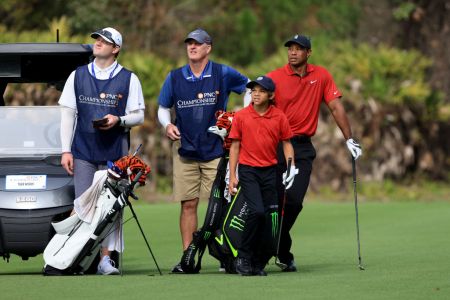